Accessibility links
Cybertruck: Elon Musk Unveils Tesla's Truck With A Polarizing Wedge Shape The all-electric truck's unique design threw some Tesla fans for a loop. And the event went off track when a demonstration meant to show off the truck's "armor glass" left the windows smashed. 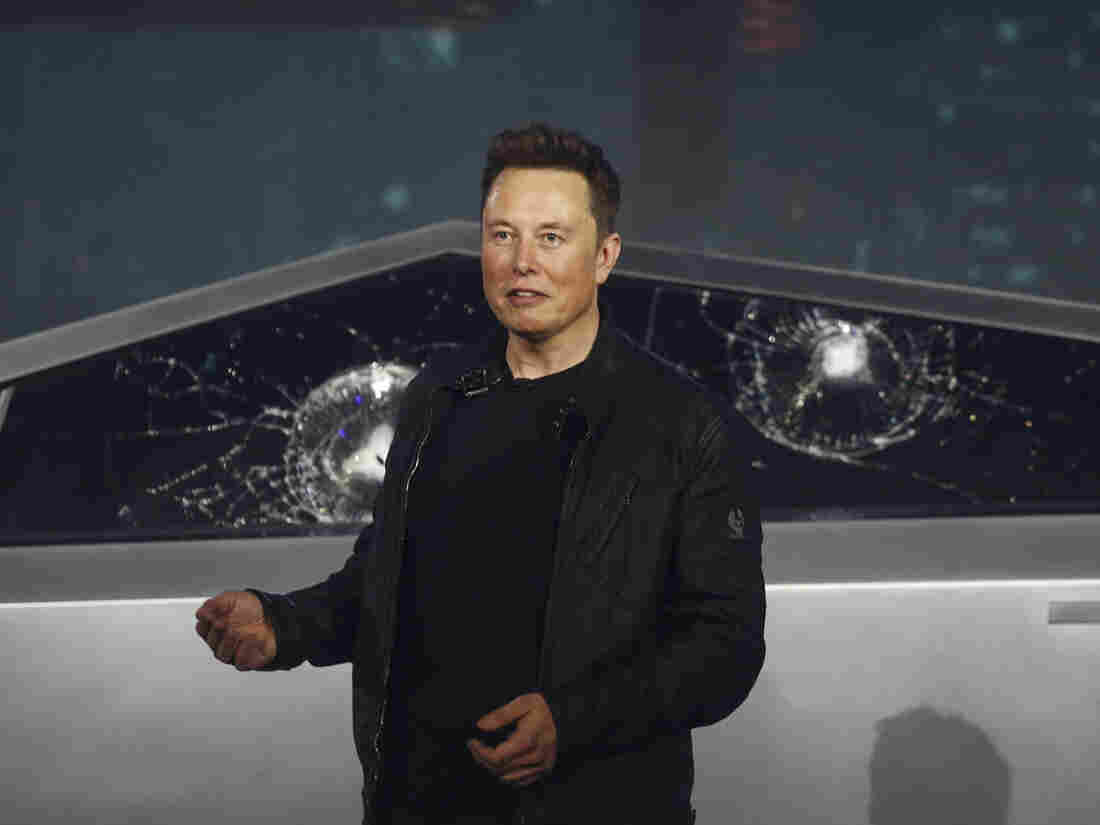 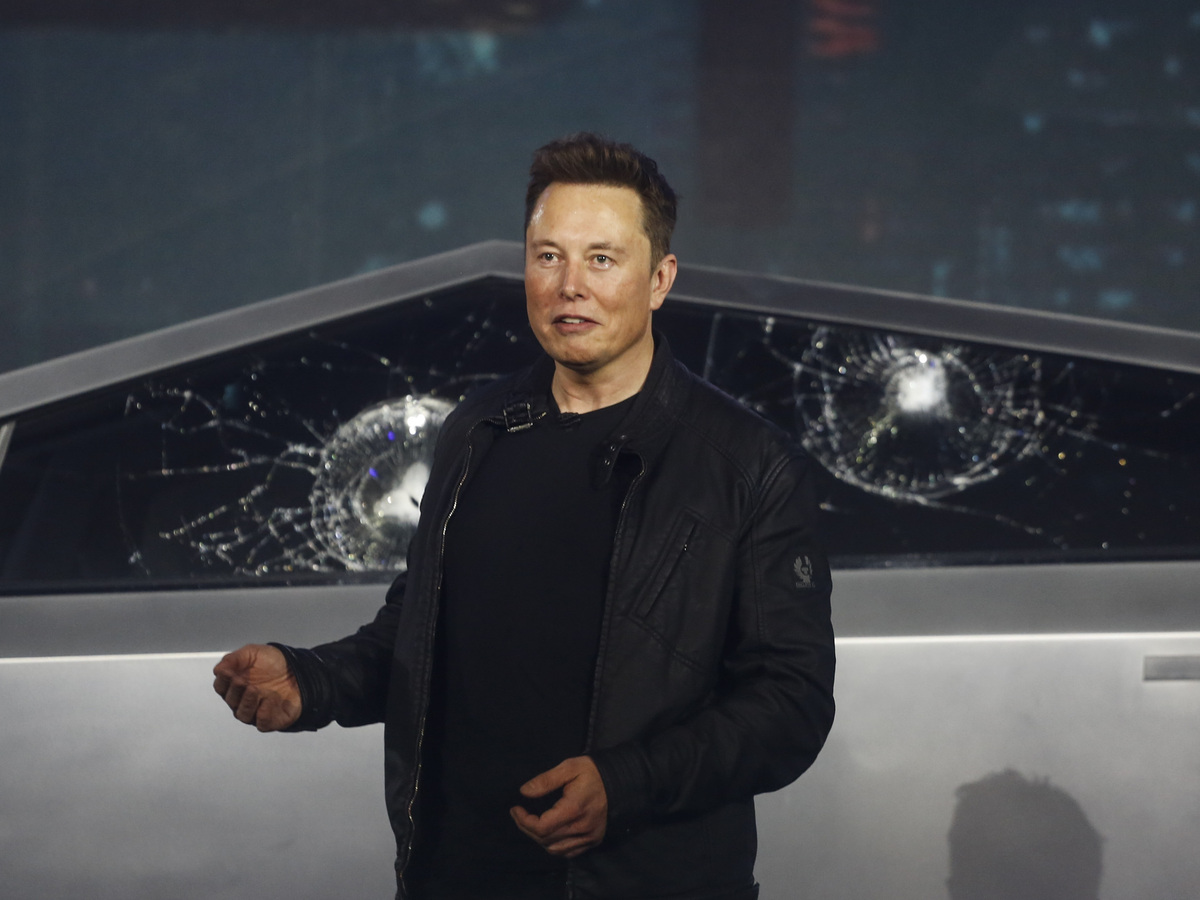 Tesla co-founder and CEO Elon Musk showed off his company's all-electric "Cybertruck" on Thursday, touting its versatility and toughness. But the truck's unique design — it follows one angle from the front bumper to the top of the windshield, for instance — threw some Tesla fans for a loop.

And during a demonstration to show off the truck's "armor glass," the windows smashed.

In typical Tesla style, the unveiling in Los Angeles included a countdown clock and an auditorium full of fans and journalists. The truck drove onto the stage through wafts of artificial smoke, and music drummed through loudspeakers. On the periphery, pyrotechnic flames rose as the vehicle stopped in front of a graffiti-style Cybertruck graphic, in stark black and white.

Musk had teased several of the design cues ahead of the event, citing influences from Bladerunner to the James Bond movie The Spy Who Loved Me. Both films featured vehicles with sharply angled front ends and overall wedge shapes — an approach to car design that's been seen as futuristic and aerodynamic since Alfa Romeo created the knifelike Carabo concept car in 1968. Others followed, such as Lamborghini's angular Countach and the Lotus Esprit, one of which was made into an amphibious vehicle for Roger Moore's James Bond — a car that Musk bought in 2013.

The front of the Cybertruck angles up to a point just above the front-seat headrests, where it meets an even longer slope down to the rear — a continuous plane that includes both a transparent roof panel and the truck's rolltop bed cover, which retracts behind the back seats.

Musk seems to have expected the wedge-shaped design to split some potential customers, saying months before the truck's long-awaited unveiling that its look "may be too futuristic for most people." 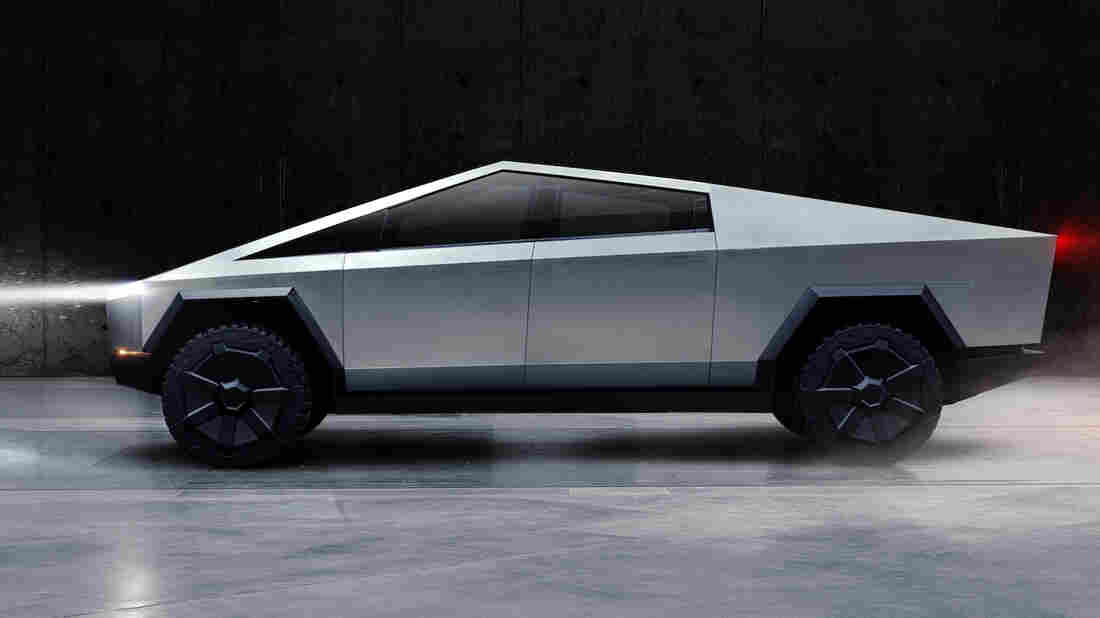 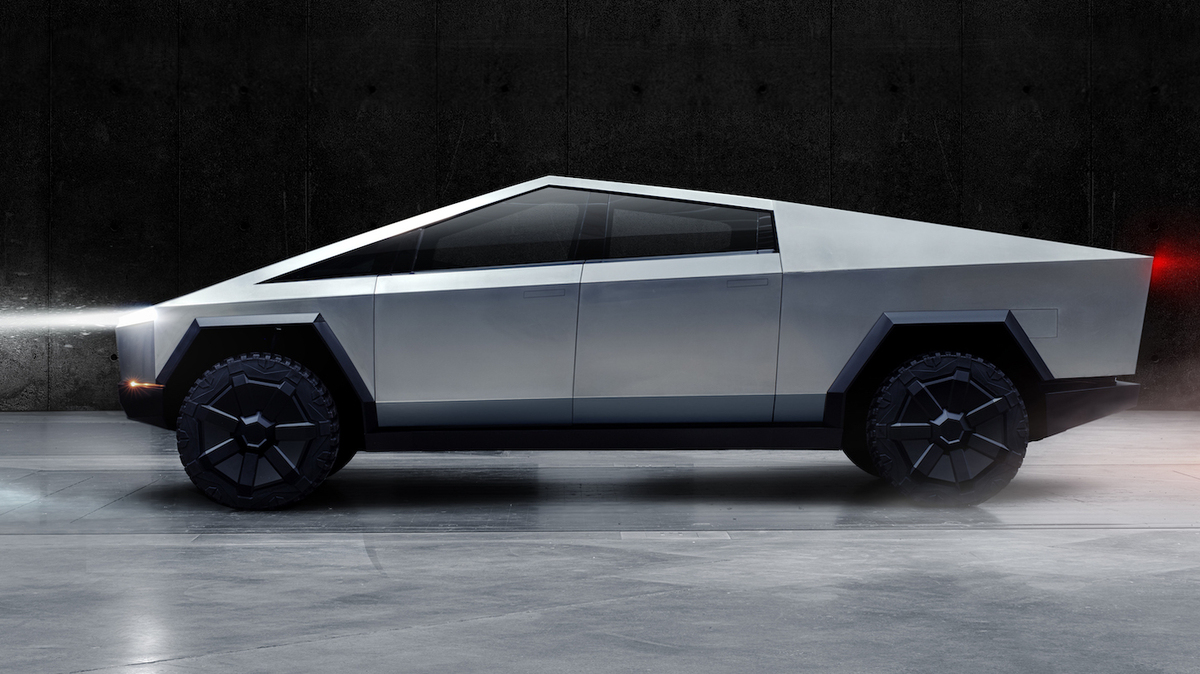 Tesla unveiled its Cybertruck electric vehicle Thursday night. After the much-hyped event, the company's fans were divided on the truck's aggressively angular design.

The Cybertruck also looks markedly different from the truck concept improvised by Tesla owner Simone Giertz — who won fans earlier this year when she hacked off the back roof of a new Tesla Model 3 and converted the sedan into a truck.

Giertz, who was at the Tesla event, said of the Cybertruck," I have no idea what I think of it. Need to sleep on it."

On Friday, she elaborated somewhat: "I've slept on it now, but my facial expression is still the same. I think I might have gotten chronic shocked #Cybertruck face."

Critics called it a doorstop or a very ugly DeLorean — or something that might be seen in an old vector-graphic video game. But the truck also had its defenders, who seem to chalk up the initial negative comments to the Cybertruck's bold look.

"Really disappointed by my colleagues at so many pubs who are dismissing the Cybertruck because it looks weird," Roadshow Editor-in-Chief Tim Stevens said via Twitter. He added, "Many of these same colleagues spent this entire week lamenting an industry that is churning out samey, half-assed crossover SUVs. I'll take weird over anonymous."

Twitter user David Wu compared it to a stealth fighter: "The F35 of pickup trucks. Don't think my mind has ever been blown like this before."

Tesla says the Cybertruck drives better than most sports cars and is more useful than a normal truck. From a standing start, the truck's maxed-out version can accelerate to 60 mph in 2.9 seconds, according to the company. And on paper at least, the pairing of electric motors — known for their high torque output — with a truck would seem to be a slam-dunk concept.

But pickup trucks, like most automobiles, are also sold on image. And both Tesla and Musk have repeatedly played up the new electric truck's ruggedness.

"You want a truck that's really tough? Not fake tough?" Musk asked the crowd Thursday night. He also said Tesla will make the exterior of the Cybertruck from a stainless steel alloy developed by his companies. "We're going to be using the same alloy in the Starship rocket," Musk said, referring to his SpaceX project.

Then things went off track with the "Tesla armor glass" strength test.

A metal ball was dropped onto a sheet of what Musk described as "regular car glass," leaving a long crack.

To test a sheet of Tesla's glass, the metal ball was taken up to a height of around 10 feet and dropped again. The "armor glass" remained intact. But Musk didn't stop there — he turned the ball over to Tesla's chief designer, Franz von Holzhausen, who had previously whacked the truck's doors with a sledgehammer to show its durability.

"Franz, could you try to break this glass, please?" Musk said.

"You sure?" von Holzhausen asked.

Without much of a windup, von Holzhausen whirled the ball at Tesla's brand-new truck — leaving a nasty-looking spiderweb of splintered and dented glass.

"Well," Musk said afterward. "Maybe that was a little too hard."

Staring at the ruined window, one hand on his chin, Musk added, "It didn't go through. That's the plus side."

Then von Holzhausen asked if they should try the rear window. Musk agreed, and was soon standing in front of two pock-marked windows for the rest of the carefully stage-managed event.

"Not bad," Musk summed up that portion of the night, adding, "Room for improvement."

The Cybertruck has six seats and a cargo bed (or "vault," as Tesla calls it) that's 6 1/2 feet long. Its tailgate also hides a ramp, for rolling materials or vehicles into the bed. The truck is 231.7 inches (19.3 feet) long, nearly 80 inches wide and 75 inches tall. Tesla lists its maximum range at more than 500 miles.

The truck will be offered in a wide spectrum of driving range and weight capacity, depending on which motor is powering the vehicle. While the basic single-motor truck would have a range of around 250 miles and a tow rating of 7,500 pounds using rear-wheel drive, the three-motor all-wheel-drive version would double that range and be capable of towing 14,000 pounds, Tesla says.

The starting price for the CyberTruck is $39,900. In the most high-powered version, it would cost $69,900. The company is taking preorders now, with a $100 deposit required to reserve a vehicle that Tesla says will hit the market in about two years.

Perhaps reflecting the uncertainty over the new design, Tesla's stock price fell overnight and continued to dip on Friday, down by around 6% at midday ET. But as Investors Business Daily notes, "Since its June 3 low, Tesla stock has doubled."