Accessibility links
Some Pacific Island Nations Are Turning To China. Climate Change Is A Factor The Solomon Islands and Kiribati recently established ties with China. Economic considerations are a key driver, but both nations also cite concerns about climate change as a reason for the decision. 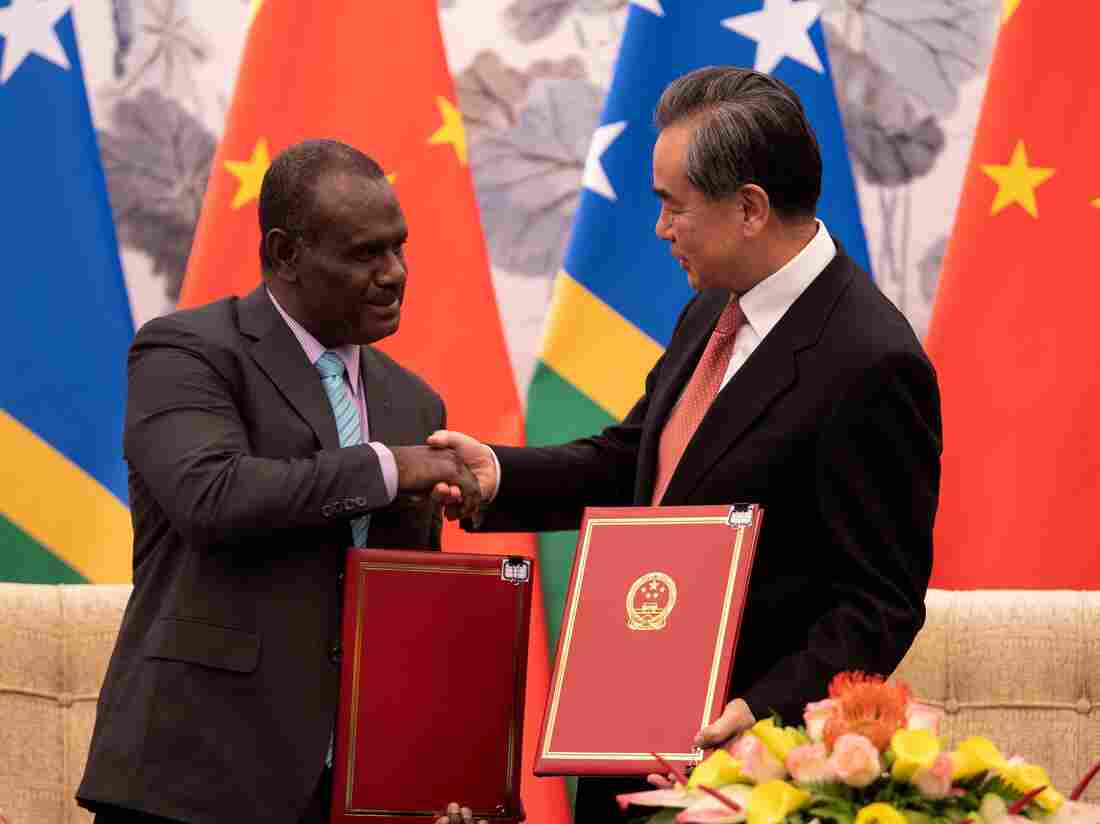 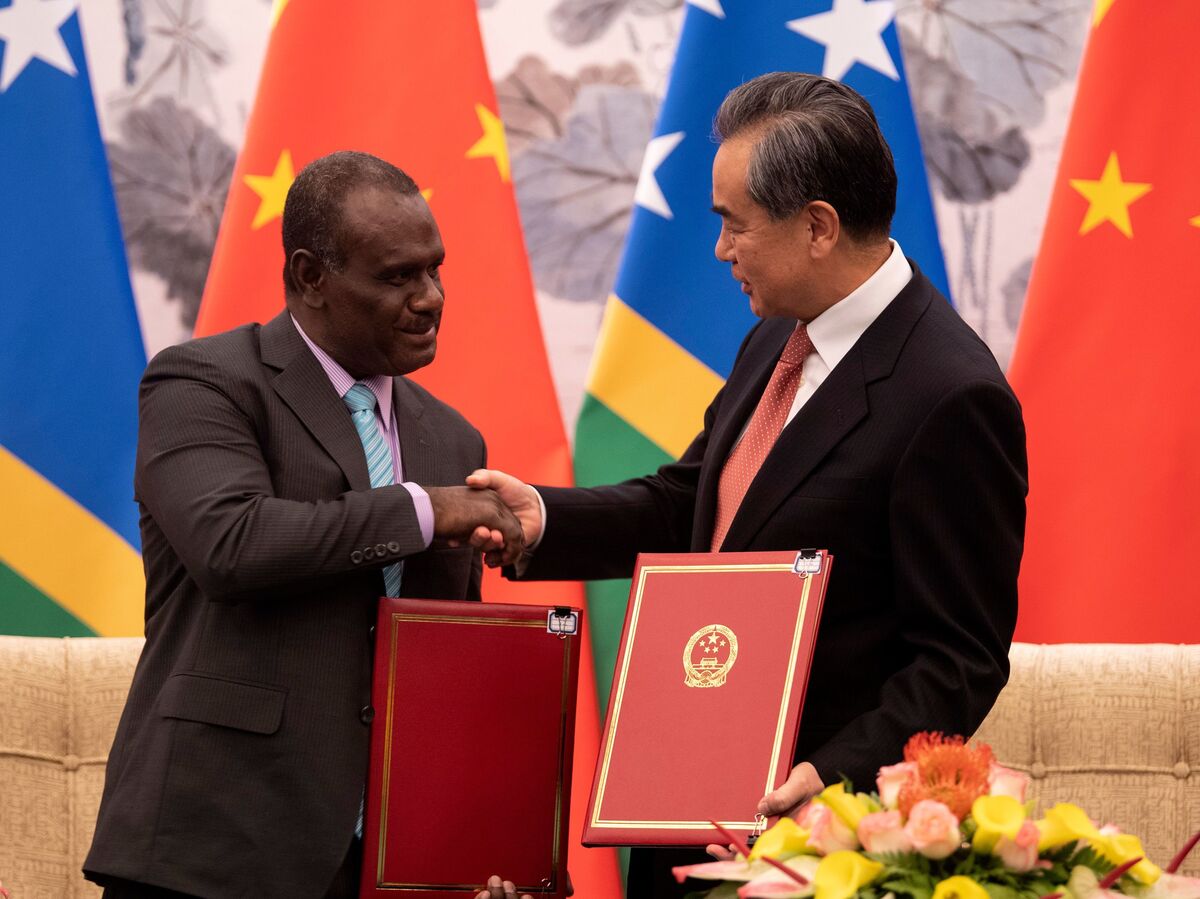 This month, the Trump administration formally began the yearlong process of pulling the United States out of the 2015 Paris Agreement. It will be the first and only country to quit the 200-nation deal to combat climate change. That's a big concern for some of the world's most vulnerable countries, including the small island nations of the Pacific.

While the administration still promises to work outside the agreement with nations on environmental problems, Pacific island nations that consider themselves on the front lines of climate change had hoped the U.S. would stay committed to the global deal to cut emissions and help populations confront the rising seas around them.

Now some leaders of those nations are turning for help to China, and climate change has been a factor. Beijing has vowed to stay in the Paris Climate Agreement. The diplomatic reconfiguration in the region has opened up a new front in the battle for influence between China and the U.S. and its allies.

"The show of lack of leadership by the current U.S. government in the fight against climate change is very discouraging not only to us but to all the low-lying island nations of the Pacific," officials from the Solomon Islands tell NPR via email. "Although China is one of the biggest CO2 emitters, it is showing leadership and commitment to help lead our global efforts against [climate change]."

An archipelago of some 900 islands northeast of Australia, the Solomon Islands decided in September to downgrade its ties with Taiwan and renormalize diplomatic relations with Beijing. Taiwan then ended its relationship with the Solomons.

Economic reasons were a key driver of the Solomons' decision, but climate change was "also a factor in the decision to switch," Robson Tana Djokovic, the Solomon Islands prime minister's chief of staff, and Samson Viulu, a senior economic official, tell NPR. "For most of us, [climate change] is about our present and future."

They've watched their islands disappear under rising seas and their drinking water inundated by saltwater. The two officials said the Solomon Islands "felt that we are not an important part of the global family maybe because we do not have big economies and so are not treated as important when it comes to [climate change]."

So they've turned to China, in hopes a relationship with Beijing will boost economic development as well as give their nation more resources to manage and mitigate the impact of global warming.

Less than a week after the Solomon Islands' diplomatic shakeup, Kiribati — a smattering of low-lying atolls in the central Pacific with a population of just more than 116,000 — announced it would also cut ties with Taiwan and establish relations with Beijing.

You can't avoid the footprint of China on the Pacific now — it's just everywhere.

"The reason was very clear," Kiribati President Taneti Mamau told reporters in New York during the United Nations General Assembly. China, "as a big power with much more resources" than Taiwan, he said, would be a better partner in tackling both domestic and global issues, including climate change. Kiribati previously had diplomatic ties to China.

China is "serious" about climate change, he emphasized, citing Beijing's promise not only to cut its own carbon emissions, but also to help Pacific island nations mitigate and manage the impacts of climate change and fully implement the Paris Agreement.

China's involvement in the Pacific has grown in the past two decades but really began to accelerate after Xi Jinping came to power in 2012, according to the U.S.-China Economic and Security Review Commission, a bipartisan panel that advises Congress on the security implications of trade and economic relationships between Beijing and Washington.

In a report issued this year, the commission said China wants to establish a military presence in the region, benefit from the region's voting power at the United Nations, gain access to natural resources such as timber, gold, nickel and fish, and undermine regional diplomatic support for Taiwan, which Beijing sees as its own.

The region is an important part of China's massive infrastructure project, the Belt and Road Initiative. According to a report last year by the U.S.-China commission, China has increased its aid to Pacific tourism and boosted the number of high-level visits by Chinese diplomats. The report also found that China has upped humanitarian assistance and disaster relief to the region.

While Xi has stated that China does not seek a "sphere of influence," Taiwan has accused Beijing of trying to "suppress and reduce Taiwan's international presence" and take away its sovereignty. The recent decision by Kiribati and the Solomon Islands to normalize relations with Beijing leaves Taiwan with 15 bilateral relationships around the world — less than a third of them small Pacific island nations, including Nauru and Tuvalu.

Taiwan is the United States' 11th largest goods trading partner, and the U.S. continues to sell it advanced weapons, even though Washington maintains no official ties with Taiwan.

And now I will begin exploring ways to cut off ties with #SolomonIslands including potentially ending financial assistance & restricting access to U.S. dollars & banking. https://t.co/1l7YdmhWNK

In Washington, the Pacific islands' recent snubbing of Taiwan set off alarm bells and drew the ire of politicians including Vice President Pence and Florida Republican Sen. Marco Rubio, who tweeted a threat to "cut off ties" to the Solomon Islands.

But America's interest in the South Pacific historically has waxed and waned, depending on geo-strategic concerns, says Scott Kroeker, interim senior manager of the Pacific Islands Development Program at the East-West Center in Honolulu.

"Whenever another rival power starts to rear their head in the region, the U.S. says, 'Oh, we better pay attention,' " Kroeker says.

Since World War II, the U.S. has kept relatively good relations with the North Pacific island nations, Kroeker says. The Marshall Islands, the Federated States of Micronesia and Palau each have bilateral agreements with the U.S. known as compacts of free association. They receive hundreds of millions of dollars in U.S. aid and depend on Washington for defense.

Both Washington and Taipei are closely watching for the results of this week's Marshall Islands general election. The current Marshallese government is an ally of Taiwan, while the opposition is eager to work with China. The winner will head up negotiations to renew the compact with the U.S., set to expire in 2024.

In the South Pacific, the U.S. shares influence with Australia and New Zealand, with the latter two countries giving more aid money and military resources to the region than Washington. But China has "significantly bolstered" its economic, diplomatic and security engagement in the Pacific islands over the past five years, according to a 2018 U.S.-China Economic and Security Review Commission report.

"Beijing's growing engagement in the Pacific islands poses a number of implications for U.S. interests in the region," the commission report says. "Some analysts are concerned China is trying to erode U.S. influence in the region to weaken the U.S. military presence and create an opening for Chinese military access."

Jonathan Pryke, director of the Pacific Islands Program at the Lowy Institute think tank in Sydney believes such concerns are overblown. There's "a really low probability" of China setting up a military base in the Pacific islands, he argues, despite U.S. and Australian fears. Not only have Washington and Canberra become more alert to Beijing's moves in the region, but the Pacific island nations themselves "don't want to be further militarized," he explains.

"They didn't have a good run of it in World War II, they vividly remember that," Pryke says. "Also they are fiercely protective of their sovereignty."

Both Australia and New Zealand have re-upped engagement in the Pacific region, along with the U.S. In recent months, Secretary of State Mike Pompeo visited Micronesia and met with President David W. Panuelo, Marshall Islands President Hilda Heine and Palau's Vice President Raynold B. Oilouch. The U.S. has promised not just one, but two infusions of new aid to the region, totaling $101.5 million, geared toward climate change resilience and sustainable development, among other issues. This week, the U.S. and its allies pledged to develop a deep-sea port in the Solomon Islands.

Australia and New Zealand remain the dominant financiers of Pacific aid, delivering some 54% of the more than $2 billion (USD) in assistance given to Pacific island nations between 2011 and 2017, Pryke says. Japan, China and the U.S. round out the list of top five donors, with the U.S. giving a little more than 7% over the same time period.

Starting in 2006, China's engagement in the Pacific region "really started ramping up, reflecting similar trends elsewhere in the world," Pryke says. Between 2011 and 2017, Beijing gave about 8% of all foreign aid to the Pacific region with more than 80% of it through concessional loans. These loans, with their long-term payment plans, have led some experts to accuse China of "debt-trap diplomacy."

China is winning government contracts and dominating the infrastructure space in the region, Pryke says, and the way Chinese state-owned enterprises interact with island nations should be more of a concern than the possibility of China setting up a military base.

"These companies that have operations around the world and, to a large extent, it's in their interest to see that there is diplomatic relations," he says. "And so their bottom line is about making profit, just like companies anywhere in the world."

Meanwhile, there has also been an influx of Chinese immigrants to build these projects because Chinese firms prefer to use Chinese labor — causing tensions over jobs and business practices across the Pacific region.

"So the landscape is dramatically changing," Pryke says. "And it's only in the last few years that we've seen the tipping point, where the rest of the world started paying attention, because you can't avoid the footprint of China on the Pacific now — it's just everywhere."