Accessibility links
Japanese American Former Basketball Star Inspired On And Off The Court Wataru "Wat" Misaka helped open the door to people of color in professional basketball and gave hope to the Japanese American community during World War II.

Japanese American Former Basketball Star Inspired On And Off The Court

Japanese American Former Basketball Star Inspired On And Off The Court 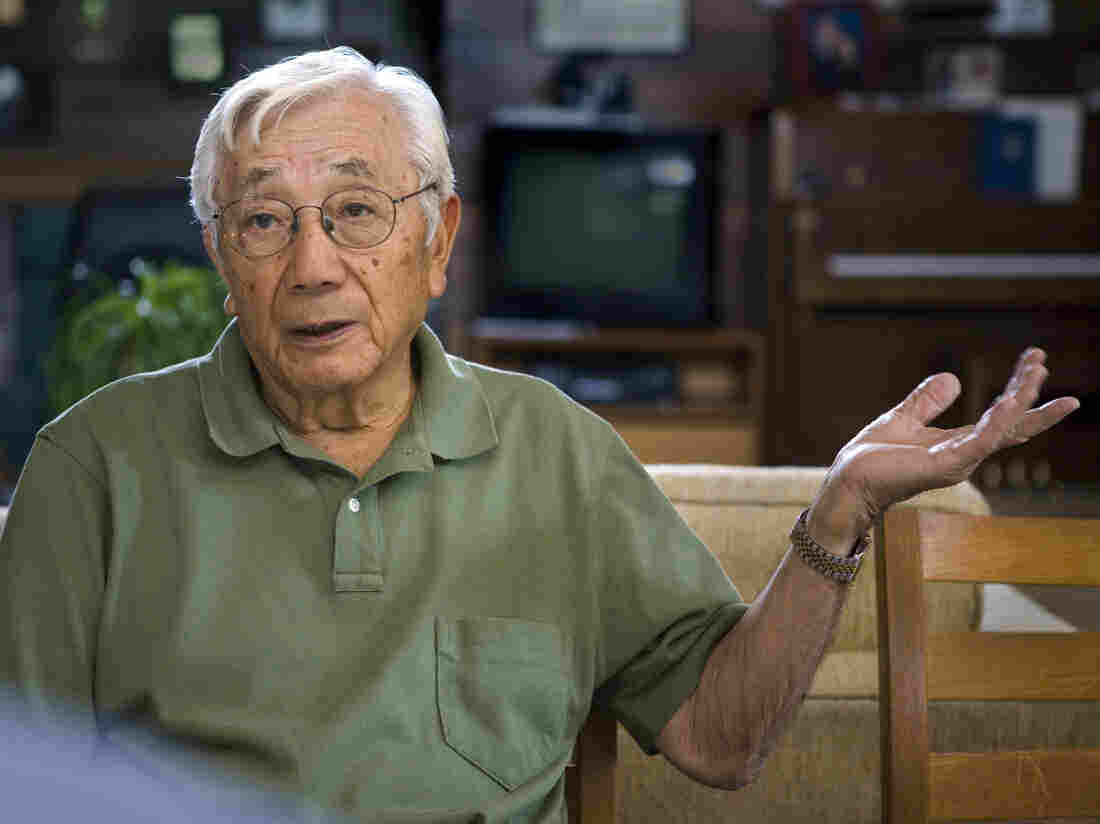 Wat Misaka talks with a co-director of a film made about him at his home in 2008, in Bountiful, Utah. Misaka, who died this week, was the first nonwhite professional basketball player in the NBA. Douglas C. Pizac/Associated Press hide caption 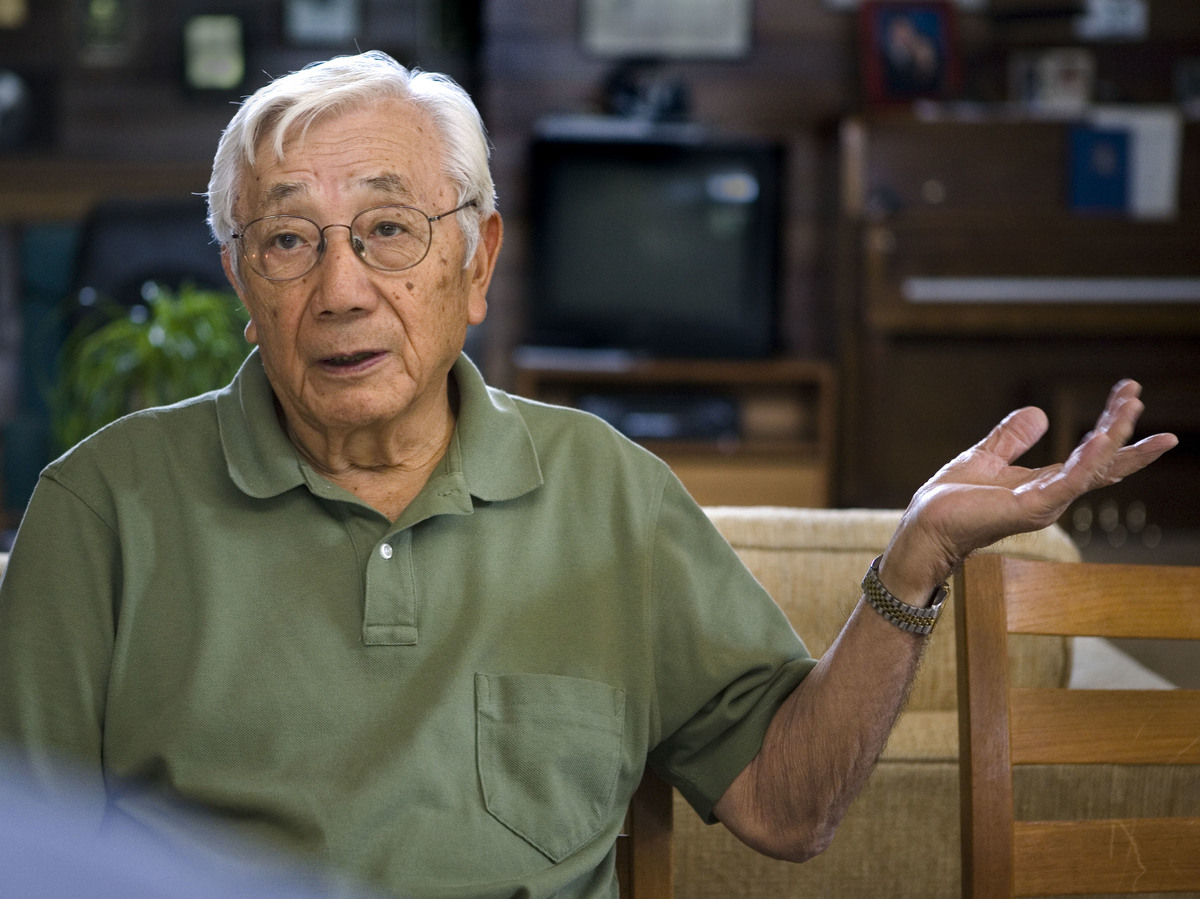 Wat Misaka talks with a co-director of a film made about him at his home in 2008, in Bountiful, Utah. Misaka, who died this week, was the first nonwhite professional basketball player in the NBA.

Wataru "Wat" Misaka was known as a better bowler than basketball player in his hometown of Ogden, Utah. But it was his skills on the court that would lead to college success and ultimately a historic contract with the New York Knicks, making him the first nonwhite professional basketball player in the NBA.

The 95-year-old Misaka, who died Wednesday, is being remembered this week for the hope he inspired both on and off the court, especially during a particularly painful chapter in American history.

Misaka's parents ran a barbershop in the railroad town of Ogden, north of Salt Lake City. He was a natural athlete, said Bruce Johnson, who got to know him while making the 2010 documentary, Transcending: The Wat Misaka Story. He loved all kinds of sports, including tennis, golf and one Johnson wasn't expecting.

"It was interesting for us when we started touring with the film, there was all these people in the Japanese community who knew Wat strictly as a bowler," Johnson said, adding that Misaka was added to the Japanese American National Bowling Hall of Fame in 2001. "So to hear the story that he was a famous basketball player, they were like, 'Oh, I had no idea.' "

As a student at Ogden High School in the 1940s, Misaka got his first taste of victory when his basketball team won state and regional championships.

After graduating, he enrolled at Weber Junior College — later known as Weber State University — where he and his team won two championships in 1942 and 1943.

More success followed at the University of Utah, where he's credited with leading the team to a 1944 NCAA championship. He was drafted by the U.S. Army in the middle of his college basketball career and was stationed at one point in Hiroshima, Japan, Johnson said.

Once he returned home, he went back to the university and back to the basketball court. In 1947, he helped the team win the National Invitation Tournament, the year he'd be drafted as a pro.

What makes Misaka's story even more remarkable, Johnson said, is how much he accomplished during this time period, World War II. While at war with imperial Japan, the U.S. government forced Japanese Americans into internment camps across the country, including one camp in Utah.

Misaka wasn't among those sent to the camps, but at times he experienced anti-Japanese sentiment during games. Some basketball fans would yell racial slurs at Misaka, or tell him to go home.

"It was hard for Wat because like he said he was already home," Johnson said. "He was just a kid so he didn't even know how to even take that."

But within the internment camps, Misaka became a symbol of hope, said Chris Komai with the Japanese American National Museum in Los Angeles.

"Most Japanese Americans — because there (wasn't) a lot of good news going on during the war — were aware that he and his team had won the NCAA tournament," Komai said. "This is a huge boost because our community has always been one that really prides the high achievers and shares in their achievements." 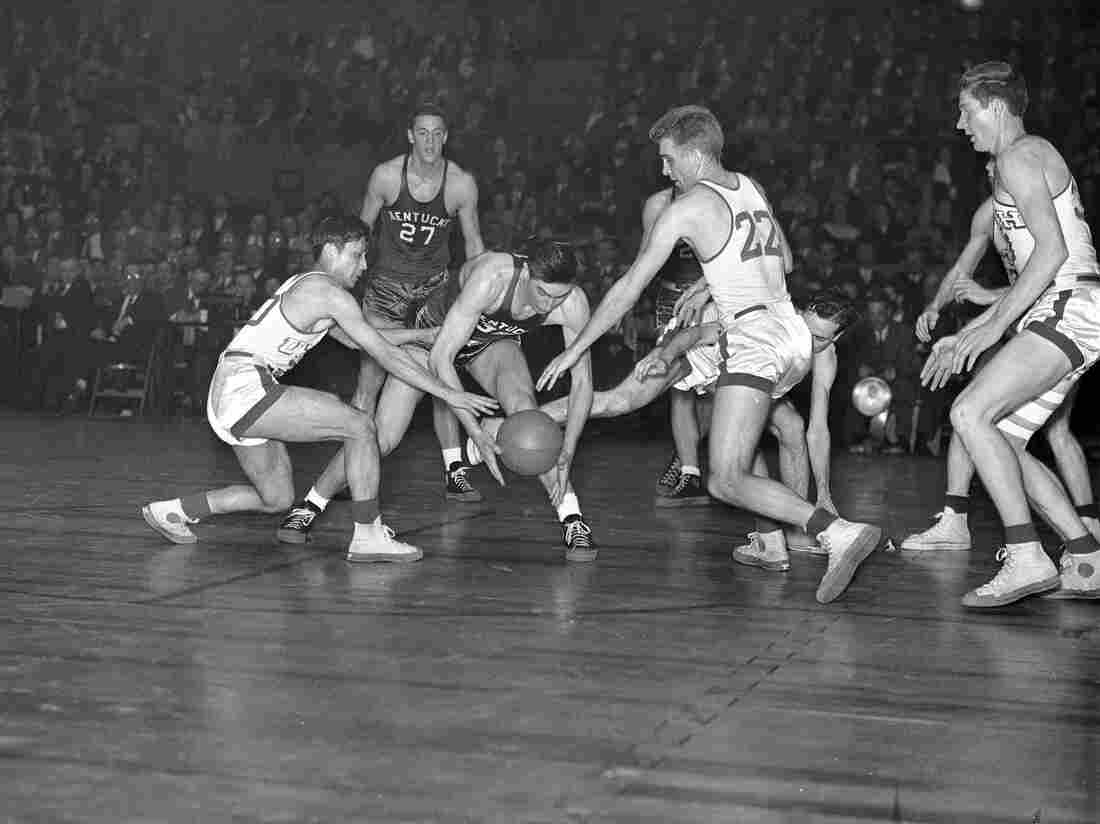 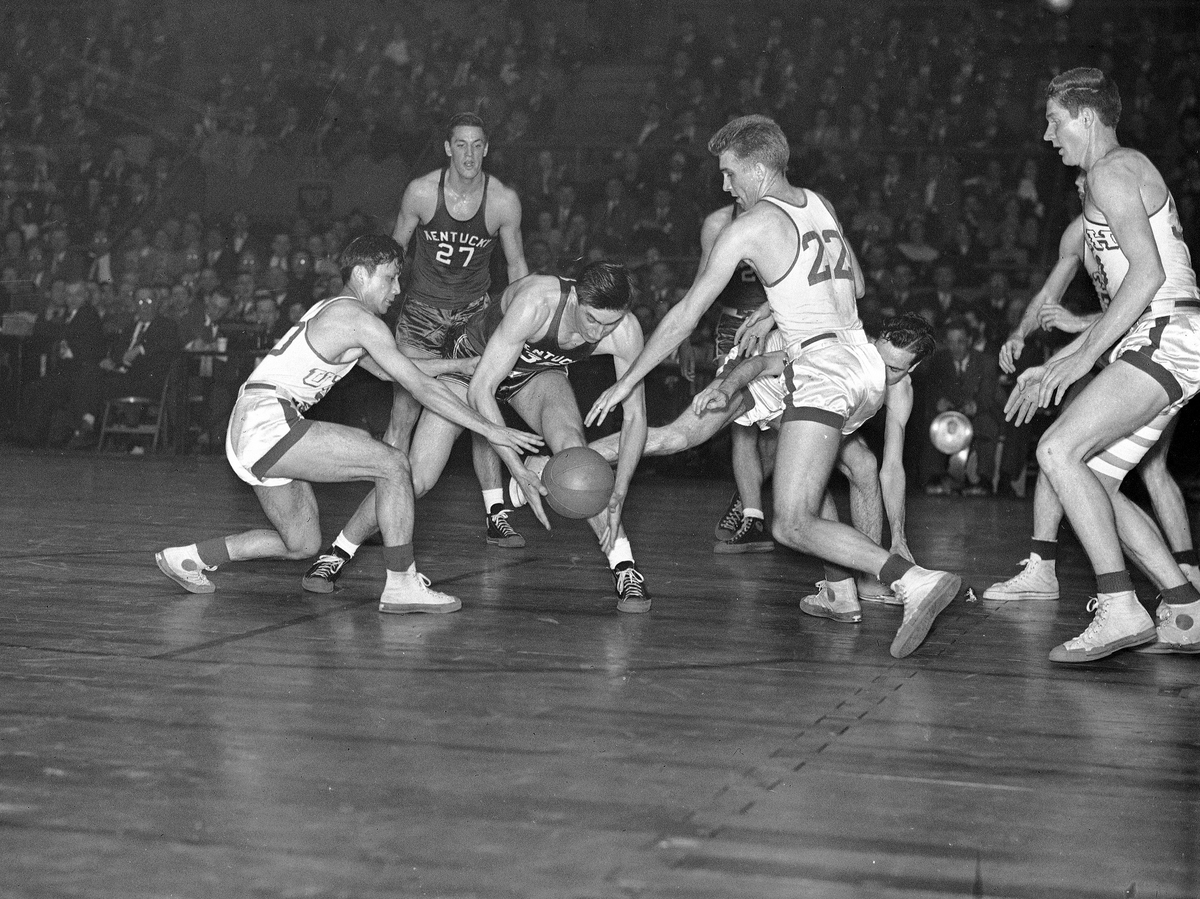 Wat Misaka, far left, appears in a scramble for the ball during the National Invitation Tournament in New York's Madison Square Garden, March 24, 1947.

Misaka went on to join the Utah Hall of Fame, the Weber State Athletics Hall of Fame and was also part of a sports exhibit at the Japanese American National Museum.

But Misaka was always humble about his accomplishments, Johnson said.

He was drafted by the New York Knicks in 1947 in what we now know as the NBA. That was the same year that Jackie Robinson broke a similar color barrier in baseball. It was three years before Earl Lloyd became the first African American NBA player.

In a 2012 interview with NPR, he said he saw his draft as an insignificant event — he played only three games.

"I don't think anyone, especially me, even compared that with what (Jackie) Robinson had done," Misaka said. "I never did think of myself as a pioneer of any sorts."

For the Japanese American community, Komai said Misaka represents someone who embodies many of the qualities they admire: someone who is humble, works hard, tries their best and is a selfless teammate. That will be Misaka's legacy, Komai said.

"He showed everyone in the worst times, in the 1940s, that it was still possible for an individual like him, who looked every other nisei [second-generation Japanese American] he could succeed at the highest level collegiately," Komai said.

Misaka is survived by his two children and his grandchildren.