Accessibility links
Review: Further Adventures Of A Cat-Loving AI In 'Catfishing On CatNet' Naomi Kritzer's new novel takes off from her award-winning story about an AI that loves cats. It's a wild, rollicking tale with a gritty truth at its core: You never know who you're talking to online. 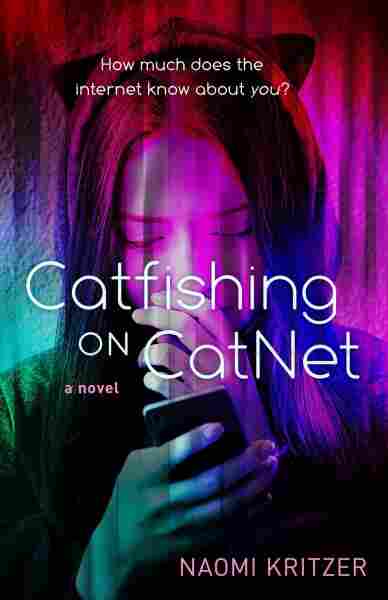 Steph is used to starting over. She and her mother have been on the run from her father for as long as she can remember, moving from town to town and school to school, always leaving when it seems like there's a chance he could find them. The only thing that remains consistent in her life is the close connection she's made with a chat group on a website called CatNet. They upload photos of cute animals, they talk about being teenagers, they encourage each other — all from a safe, anonymous distance.

But one member of CatNet has a secret. CheshireCat isn't a teenager at all, but a sentient AI with a love for cat photos and an intense interest in the inner workings of humans. That's why they created CatNet in the first place. But they didn't consider what would happen if they came to care for the humans they interacted with, let alone what they would do if one of those humans was in danger.

Danger does indeed come for Steph. As she tries to settle into yet another new school, she chafes against the restraints of her life and begins to take the kinds of risks that would make her mother load the van and speed out of town. It seems almost like a game, but one choice compounds the next, secrets begin to unravel, and soon Steph finds herself in the kind of trouble that will require a miracle to get out of — or the help of an all-powerful AI.

This book is an engaging blend of tech thriller, mystery, and teen drama that kept me up reading way later into the night than was strictly wise.

This book is an engaging blend of tech thriller, mystery, and teen drama that kept me up reading way later into the night than was strictly wise. But I almost didn't read it. The title, Catfishing on CatNet, was nearly a deal-breaker for me. It sounded goofy and awkwardly trendy in a try-hard sort of way. But author Naomi Kritzer won the Hugo and Locus awards for her short story, "Cat Pictures Please," which is based on the same premise, so I decided to take a risk. Now I'm here to tell you that if the title has the same effect on you as it did on me, you should get over it and try it anyway.

Why? Well, the teen drama aspect is heartfelt and relatable, the mystery has enjoyable and sometimes shocking twists and turns, and the trajectory of the thriller plot is quite frankly bonkers. Just when you think it's about to slow down or pull back, instead it goes there and then keeps on going. It doesn't always make the most sense, but when you're talking about impromptu armies of hijacked robots, who even cares? It's bold and absurd and a whole lot of fun.

'The Fountains Of Silence' Flows With Love, Anger, Fear And Hope

Steph's life is the stuff of made-for-TV drama, but despite that, she feels deeply relatable and accessible as a character. We meet her at a moment when she realizes that she should be asking more questions about her life and begins throwing rocks at the fence that surrounds her, testing its strength. We also get occasional passages from CheshireCat's point of view, and they manage to be simultaneously alarming and affable, acting with a shocking boldness and then wringing their virtual hands, wondering if they've done the right thing. This story heralds a coming of age for both its human and AI protagonists, and the parallels and differences are illuminating.

Catfishing on CatNet taps lightly on the concept of personhood and the ethics of artificial intelligence, but it doesn't trouble itself profoundly. There's never any question of whether or not we're on board with CheshireCat being a person. They just are.

That said, it does traffic deeply in surveillance and cyber security, and as someone who tries really hard to not think about that aspect of modern life too much, I did find myself genuinely creeped out by the amount of spying and hacking various characters are able to do. I know it's science fiction, but I also know it isn't reaching. And I think that's a message for our current times that is important for readers of all ages to keep in mind: You don't really know who you're talking to on the internet, and you don't know what you're telling them without meaning to. This gritty truth runs beneath Catfishing on CatNet's wild, rollicking ride, and it leaves it mark.