Accessibility links
Activists Disrupt Harvard-Yale Rivalry Game To Protest Climate Change The game was delayed for about an hour Saturday when students stormed the field after half-time calling on the universities to divest their multi-million dollar endowments from fossil fuels companies. 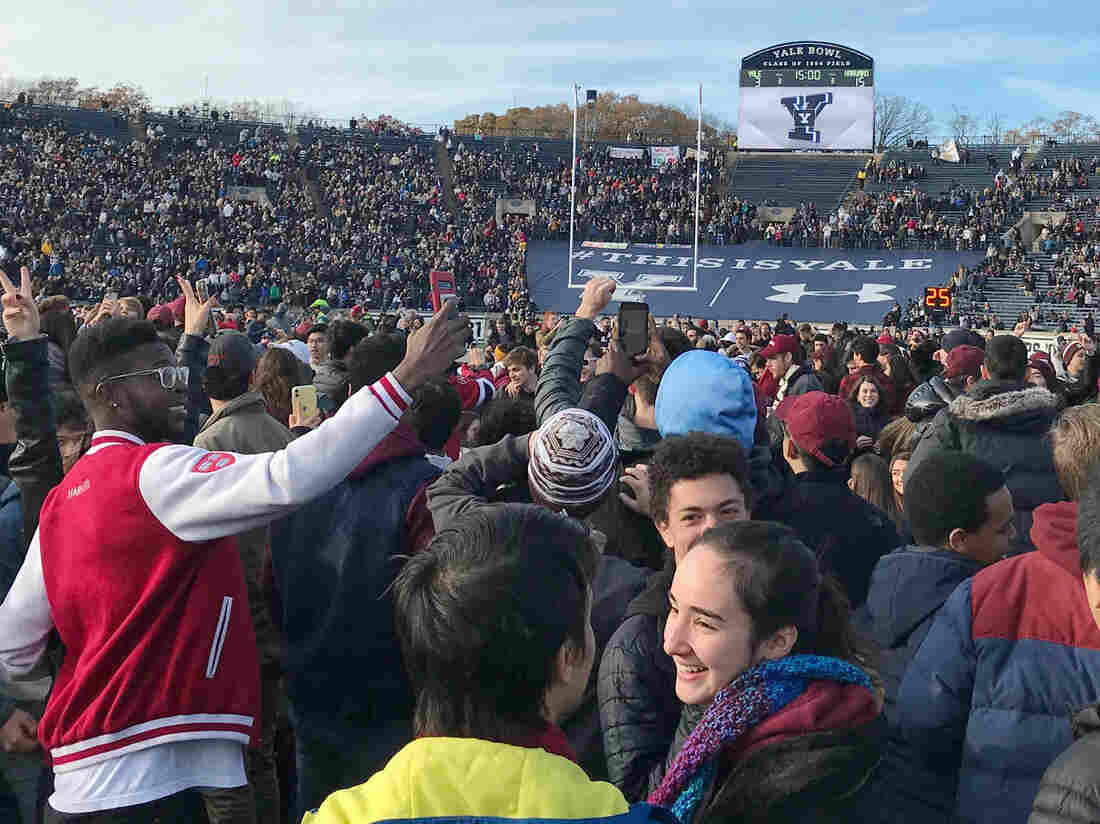 Demonstrators stage a protest on the field at the Yale Bowl disrupting the start of the second half of an NCAA college football game between Harvard and Yale, Saturday in in New Haven, Conn. Jimmy Golen/AP hide caption 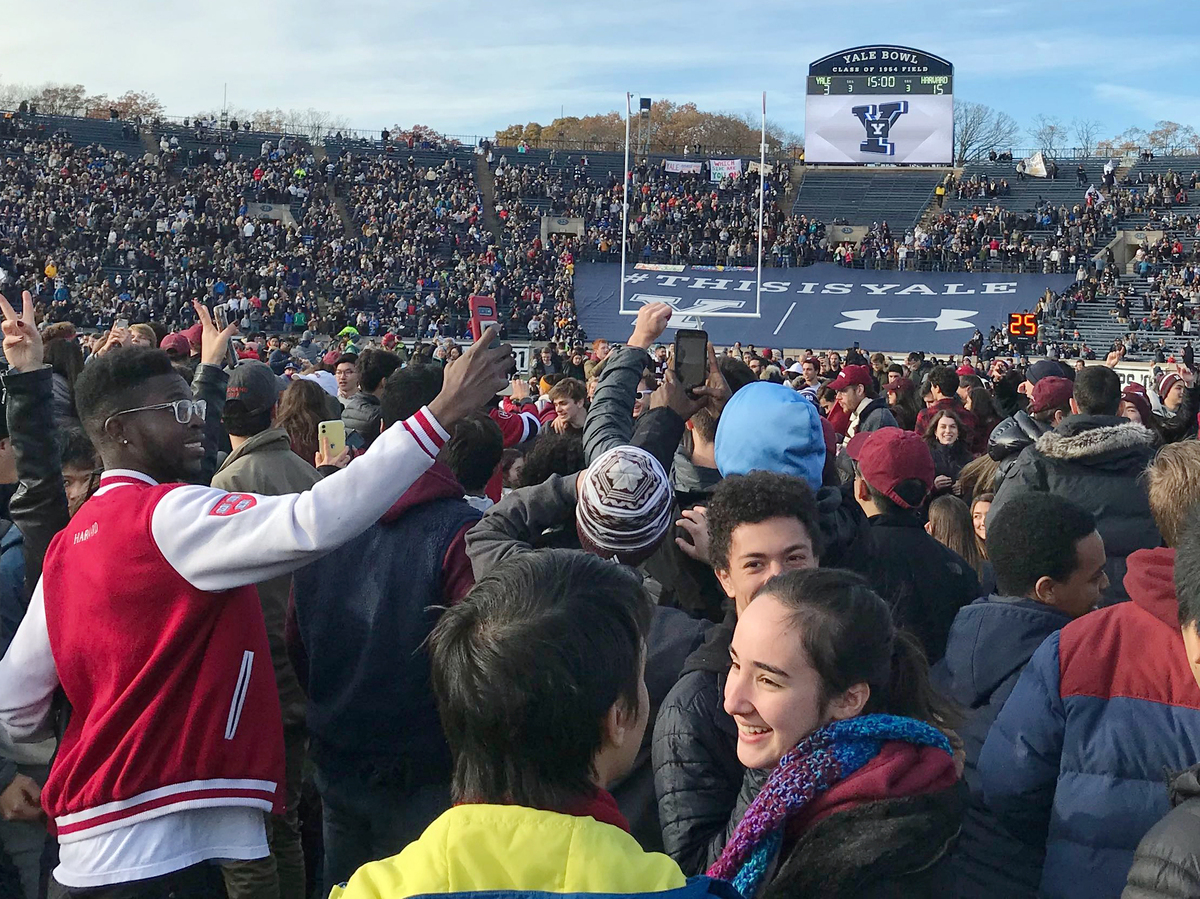 Demonstrators stage a protest on the field at the Yale Bowl disrupting the start of the second half of an NCAA college football game between Harvard and Yale, Saturday in in New Haven, Conn.

The annual Harvard-Yale football game was delayed for almost an hour on Saturday as climate change activists rushed the field at the end of halftime.

Unfurling banners with slogans like "Nobody wins. Yale and Harvard are complicit in climate injustice," protesters from both schools called on the universities to divest their multi-million dollar endowments from fossil fuels companies, as well as companies that hold Puerto Rican debt.

Clad in winter coats and hats, about 150 students sprawled around the 50-yard line at Yale Bowl as loudspeaker announcements and police demanded protesters leave the field. As protesters clapped and chanted "disclose, divest and reinvest," organizers say several hundred more fans left their seats in the stands to join in. By the time play resumed, several dozen people were issued misdemeanor summonses for disorderly conduct.

Proud mama. That is my kid in the red jacket, protesting #HarvardYale endowment $$$$ invested in fossil fuels and holdings in Puerto Rican debt. #ClimateChange #ClimateJustice pic.twitter.com/bC7ZUYniEk

Harvard senior Caleb Schwartz, one of the protest organizers who was arrested on Saturday, told NPR the mood on the field was joyful, despite the possibility of arrest.

"That moment, when we saw people running onto the field was just really incredible," he said. "I saw organizers around me crying because it was such a beautiful moment."

"We know that we don't have a lot of time to act to curb the effects of climate change, and the longer it takes for our universities to acknowledge their role in the climate crisis and accept responsibility, the longer the urgent action we need to take on climate change is going to be delayed," he says.

Schwartz says the Harvard-Yale rivalry game has been played since 1875, and organizers knew alumni from all over the world would be tuning in.

"Although it was disruptive and some people were not too happy we were on the field, it was really important because our universities are just not listening to our voices and our generation's calls for urgent climate action."

In a statement, the student groups behind the protest, Fossil Free Yale, the Yale Endowment Justice Coalition and Fossil Fuel Divest Harvard, wrote:

"Harvard and Yale claim their goal is to create student leaders who can strive toward a more 'just, fair, and promising world' by 'improving the world today and for future generations.' Yet by continuing to invest in industries that mislead the public, smear academics, and deny reality, Harvard and Yale are complicit in tearing down that future."

Harvard and Yale are not the first universities to face criticism over fossil fuel investments. The first campus divestment movements started at Swarthmore College in 2011. Harvard has repeatedly said it would not pursue divestment, while Yale has made some moves in recent years to consider climate change in its investment decisions.

"Yale stands firmly for the right to free expression. Today, students from Harvard and Yale expressed their views and delayed the start of the second half of the football game. We stand with the Ivy League in its statement that it is regrettable that the orchestrated protest came during a time when fellow students were participating in a collegiate career-defining contest and an annual tradition when thousands gather from around the world to enjoy and celebrate the storied traditions of both football programs and universities."

I support the students, organizers, and activists demanding accountability on climate action and more at #HarvardYale. Climate change is an existential threat, and we must take bold action to fight this crisis. https://t.co/lm1V6honI4

The protest garnered so much interest, that Schwartz changed his bus ticket back to Cambridge on Saturday so he could stay and field the deluge of media inquiries.

"We will win this fight, and we will get the university to divest," he told NPR from his bus home. "I truly don't think it's a question of if, it's a question of when. And the more pressure we can put on them, the sooner they will."