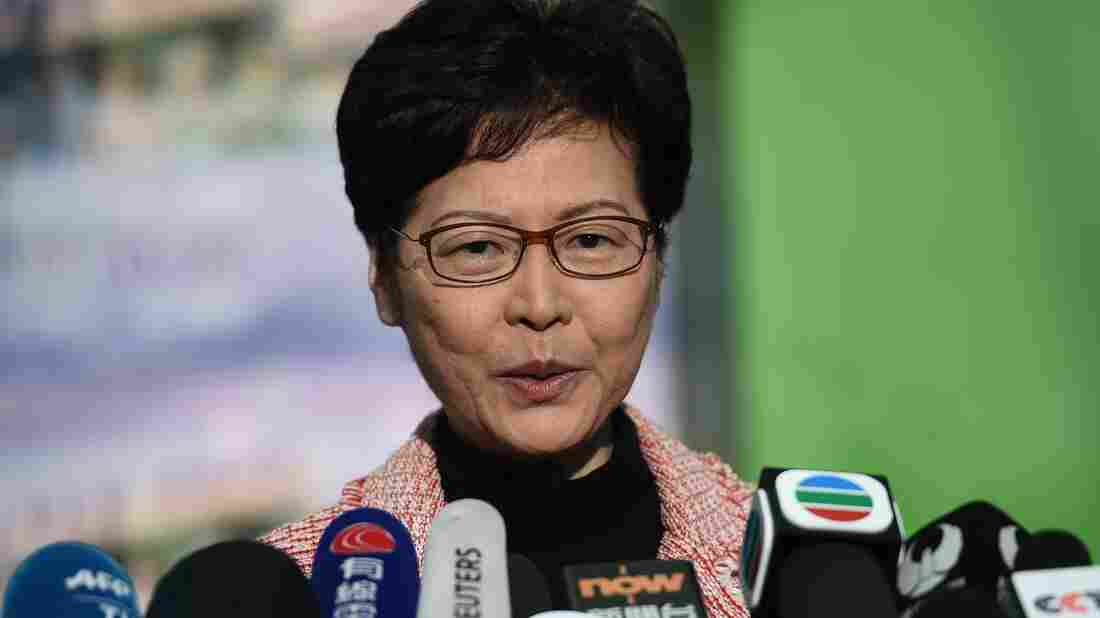 Hong Kong Chief Executive Carrie Lam addresses the media after casting her vote during Sunday's district council elections. After results showed a landslide victory for pro-democracy candidates, Lam said she would listen "humbly" to the will of the voters. Ye Aung Thu/AFP via Getty Images hide caption 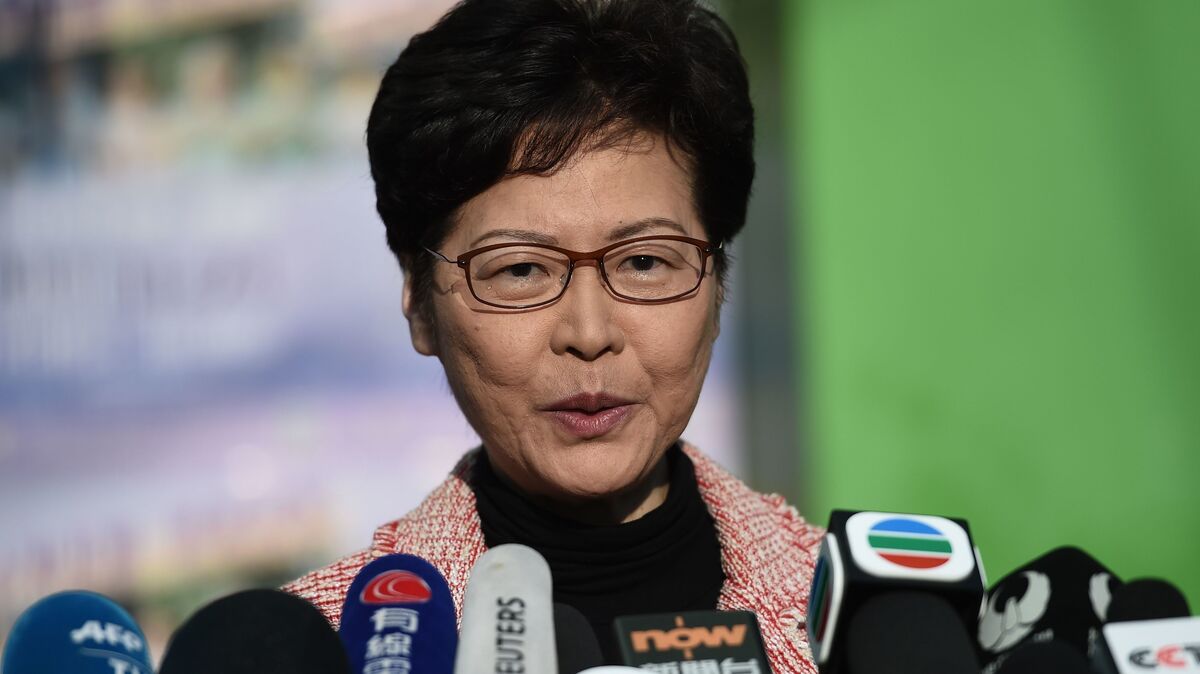 Hong Kong Chief Executive Carrie Lam addresses the media after casting her vote during Sunday's district council elections. After results showed a landslide victory for pro-democracy candidates, Lam said she would listen "humbly" to the will of the voters.

Just a day after Hong Kongers cast ballots overwhelmingly for pro-democracy candidates, handing them control of 17 of the region's 18 district councils, authorities in Hong Kong and Beijing have taken markedly different tacks in responding to the landslide.

Hong Kong's chief executive, Carrie Lam, adopted a conciliatory tone. She pledged to respect the election's results, which represented a veritable drubbing of her preferred slate of candidates. After months of massive protests, voters turned out in record numbers and give pan-democratic, or pro-democracy, candidates more than three-quarters of the total 452 district council seats.

"There are various analyses and interpretations in the community in relation to the results, and quite a few are of the view that the results reflect people's dissatisfaction with the current situation and the deep-seated problems in society," Lam said in a statement released online Monday.

Her government, she added, "will listen to the opinions of members of the public humbly and seriously reflect."

Lam, who won election in 2017 on the strength of Beijing's backing, has found herself at the center of a maelstrom since her government introduced a bill that effectively would have allowed extradition of criminal suspects to mainland China. Critics feared the measure would give the country more control over Hong Kong, which has enjoyed semiautonomy since it was transferred from the U.K. to China in 1997.

That bill formally died last month under intense popular pressure, but the popular pressure did not die with it. Since then, protesters have continued to swarm the streets with demands for direct elections of the chief executive and independent investigations into alleged police violence.

Chinese officials, for their part, reacted more tersely than their ally in the chief executive's office. At a briefing Monday, a spokesman for the Chinese Foreign Ministry did not mention the results, instead choosing to reassert Beijing's sway over Hong Kong's governance.

"The most pressing task for Hong Kong at the moment is stopping violence and restoring order. As Hong Kong is part of China, its affairs are purely domestic affairs. China is determined in safeguarding national sovereignty, security and development interests," Geng Shuang said.

"We are determined in implementing the principle of 'one country, two systems' and in opposing external interference in Hong Kong affairs," he added. 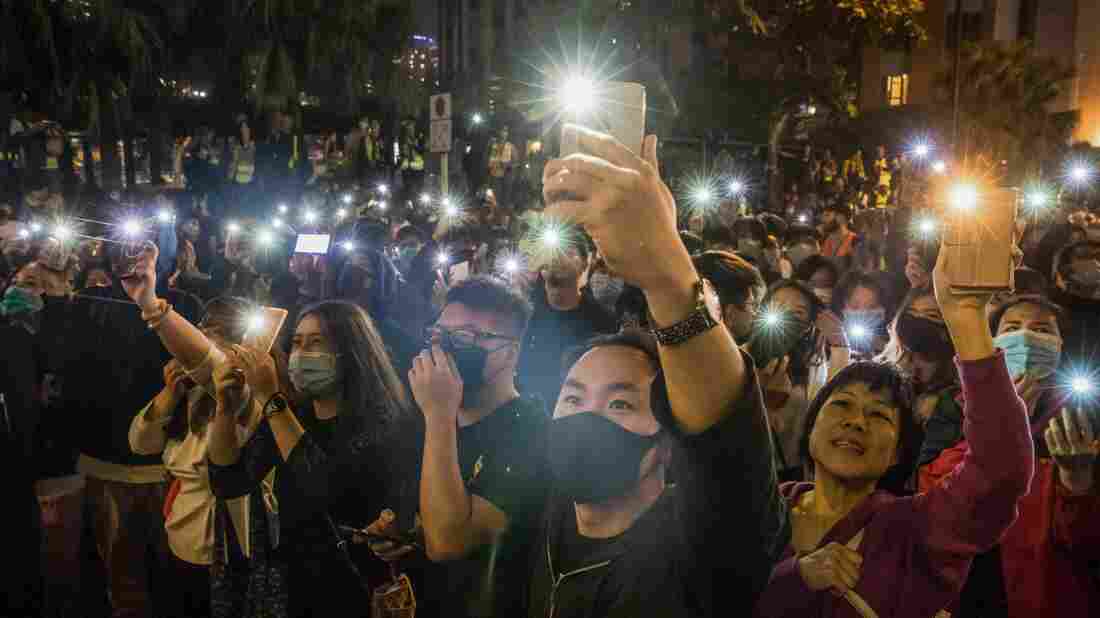 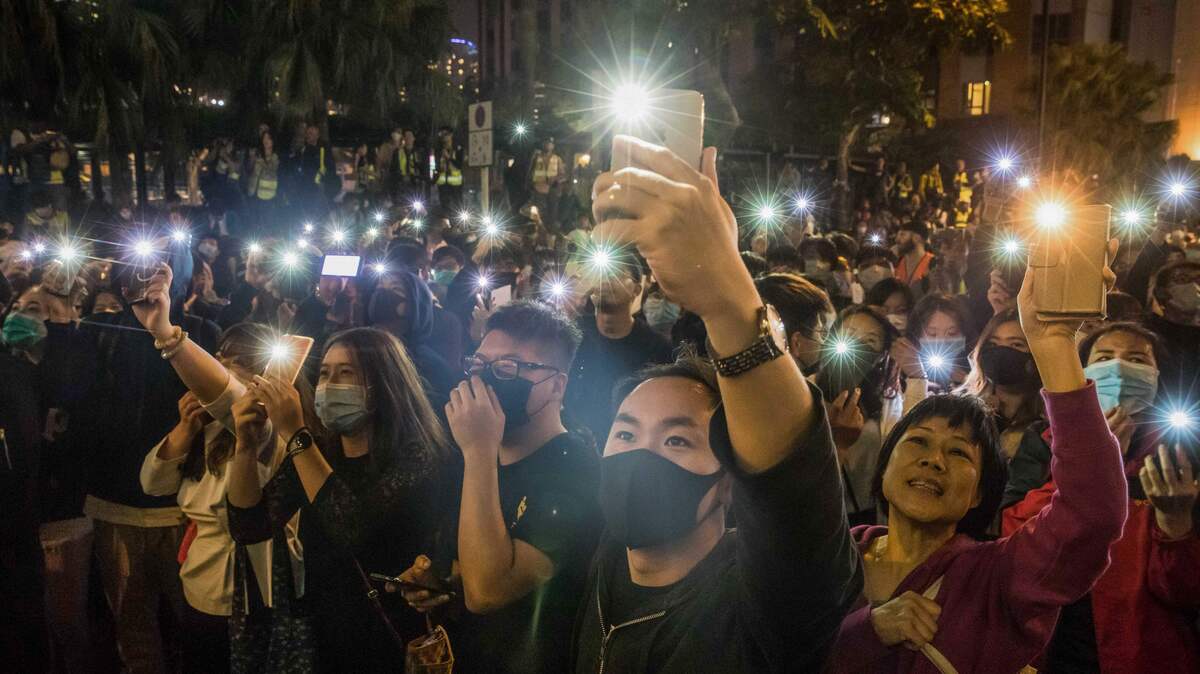 People raise their mobile phones during a demonstration Monday evening local time, near an area cordoned off by police in Hong Kong.

Back in Hong Kong, anti-government demonstrators celebrated Sunday night. But their elation, for the most part, was tempered by concern for protesters who remained holed up on the campus of a local university. For more than a week, a group of students, activists and first-aid volunteers has been barricaded in Hong Kong Polytechnic University while security forces have laid siege outside.

The contingent of occupiers, which numbered in the hundreds to begin with, reportedly has dwindled to just a handful. Several of the newly elected councilors negotiated their way past the barricade on Monday to try to help mediate an end to the standoff, while demonstrators gathered once more outside the university's gates to express solidarity and press for a peaceful resolution.

For the protesters, there was another reason to rein in their joy: For all the symbolic significance of Sunday's elections, it is unclear just how much change can be expected from the electoral victory.

District councils in Hong Kong are responsible primarily for hyperlocal concerns, such as bus routes, pothole repairs and garbage collection. The authority to effect the kinds of sweeping democratic changes that protesters are demanding largely rests elsewhere — in the chief executive's residence and the halls of power in Beijing.

Still, the newly elected councilors aren't entirely bereft of ways to make their weight felt. District councilors represent a sizable chunk of the Election Committee, the roughly 1,200-member body of politicians and business figures responsible for deciding the chief executive.

In that respect, some have suggested, the newly elected pan-democrats might have a chance to play kingmaker in the next chief executive election, expected in 2022.

An earlier version of this story incorrectly referred to Hong Kong's Election Committee as its Election Council.