Accessibility links
Program Offers TLC To Older Adults And Their Homes So They Can Stay Put Many older adults want to age in their own homes, and the CAPABLE program makes that possible by offering everything from physical therapy to grab bar installation. It's cost effective too. 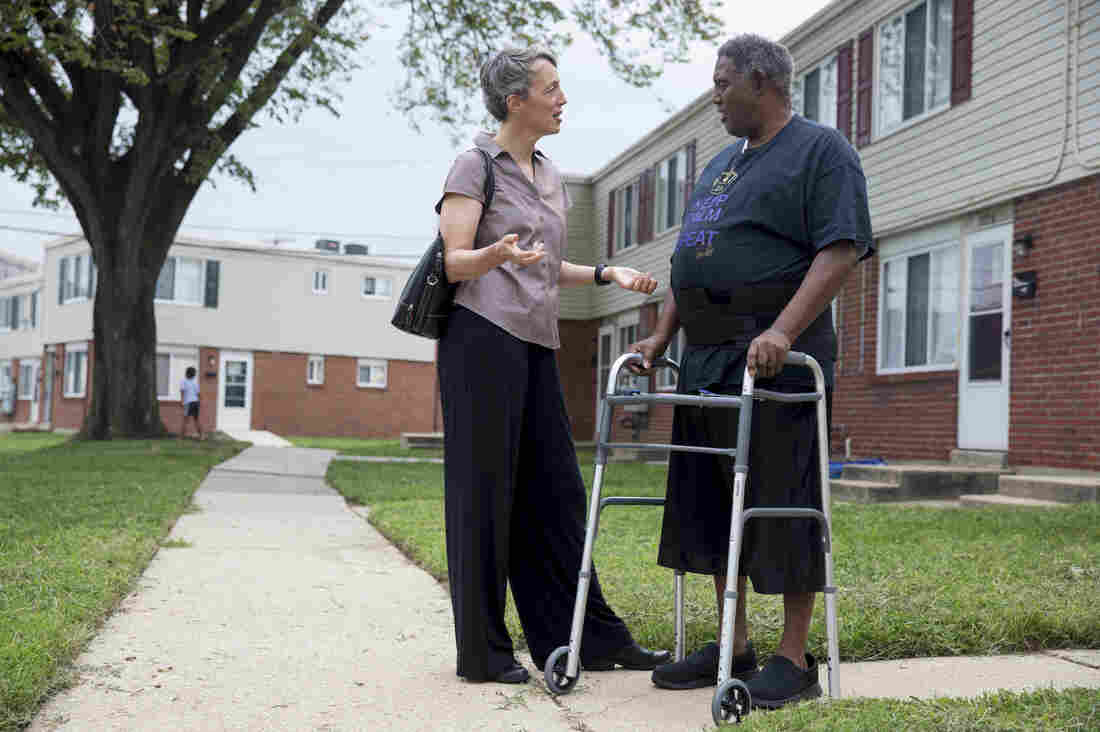 The CAPABLE program provides therapy but also offers up practical solutions to help make navigating the home easier. Sarah Szanton (left) got the idea for CAPABLE when she was a nurse practitioner treating homebound seniors. Courtesy of the Heinz Awards hide caption 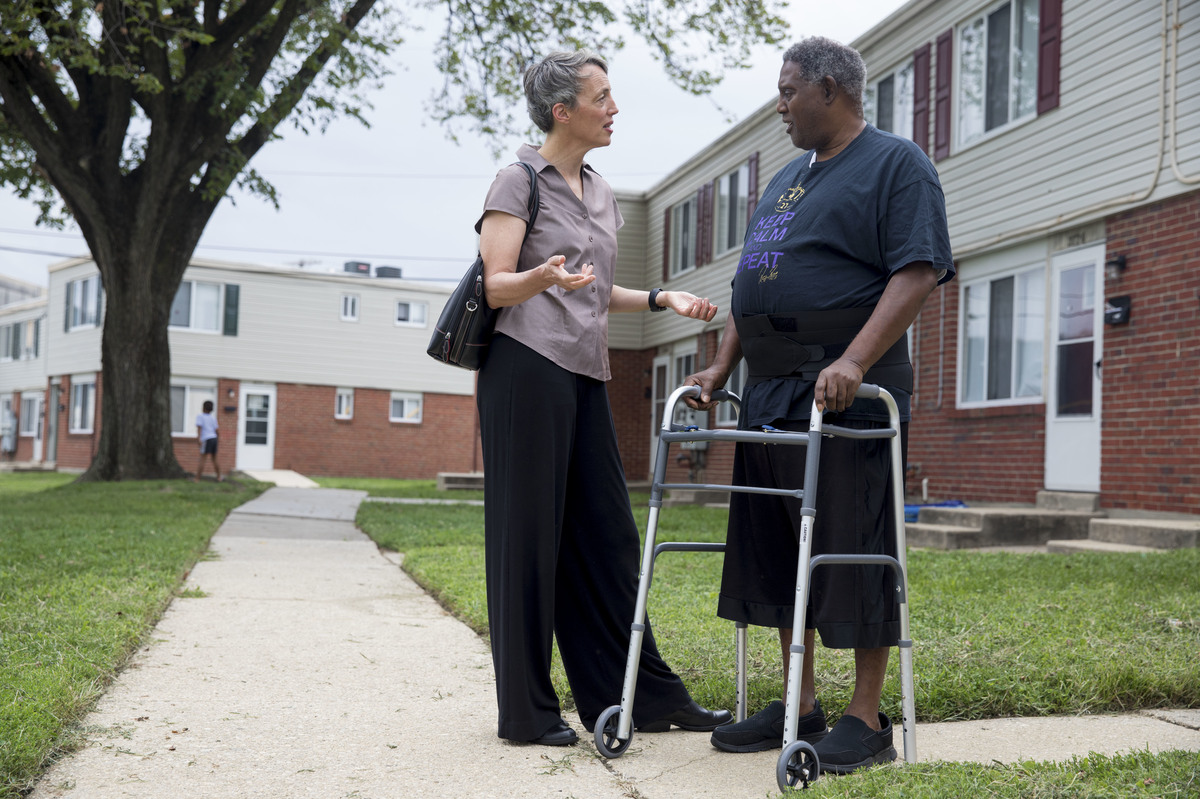 The CAPABLE program provides therapy but also offers up practical solutions to help make navigating the home easier. Sarah Szanton (left) got the idea for CAPABLE when she was a nurse practitioner treating homebound seniors.

Courtesy of the Heinz Awards

Eighty-three-year-old Betty Givens welcomes two visitors to the home she shares with her daughter in Riverside, Calif.

"Hi, how are you?" asks Melinda Underwood, an occupational therapist.

Underwood and clinical social worker JoJean Harper are concerned, but it's one of many things they can address that will help Givens remain in her home as long as possible.

Underwood and Harper are from a program called CAPABLE: Community Aging in Place — Advancing Better Living for Elders. Givens, like the vast majority of older Americans, wants to age in her own home. The CAPABLE program tries to make that happen.

Sometimes it gets hard for older people to do the things that make independent living possible, such as cook a meal or get in and out of the bath. So CAPABLE targets these obstacles, not just with therapy for the individual, but with some TLC for the home.

For example, during the visit, Underwood explores Givens' home to identify the physical challenges it presents, including making sure the kitchen is functional and that it's not too dangerous for Givens to use the two large steps leading to the laundry.

This is Underwood's third visit, so she's well aware of Givens' challenges.

"Her back starts to bother her when she walks too far," says Underwood. Givens is a Jehovah's Witness, so "she likes to go around to people's houses with other members of the church and that's something that she's kind of limited in lately because she can't walk very far."

In the CAPABLE program, older adults set their own goals, and Givens' goal is no surprise — to walk better. She lives up a steep driveway, so even going to get the mail has become an extreme sport.

This is where CAPABLE can make a difference, by both treating Givens' medical issues and transforming her environment. Underwood suggests that Givens needs a railing installed along the driveway so she has something to hold on to. She goes out to take measurements so she can get a quote from a handyman.

Meanwhile, clinical social worker Harper discusses ways that Givens can improve her diet and manage her pain. Harper will also do some strengthening exercises with Givens so that when the railing is installed, Givens is strong enough to use it.

It's rare for a health care plan to include home repair. Sarah Szanton, a professor at Johns Hopkins University's School of Nursing, got the idea for CAPABLE when she was a nurse practitioner treating homebound seniors more than a decade ago.

Another patient of Szanton's back then would throw Szanton the keys from a second-story window because she couldn't get down the stairs to open the door. Another would crawl to the door to let Szanton in. 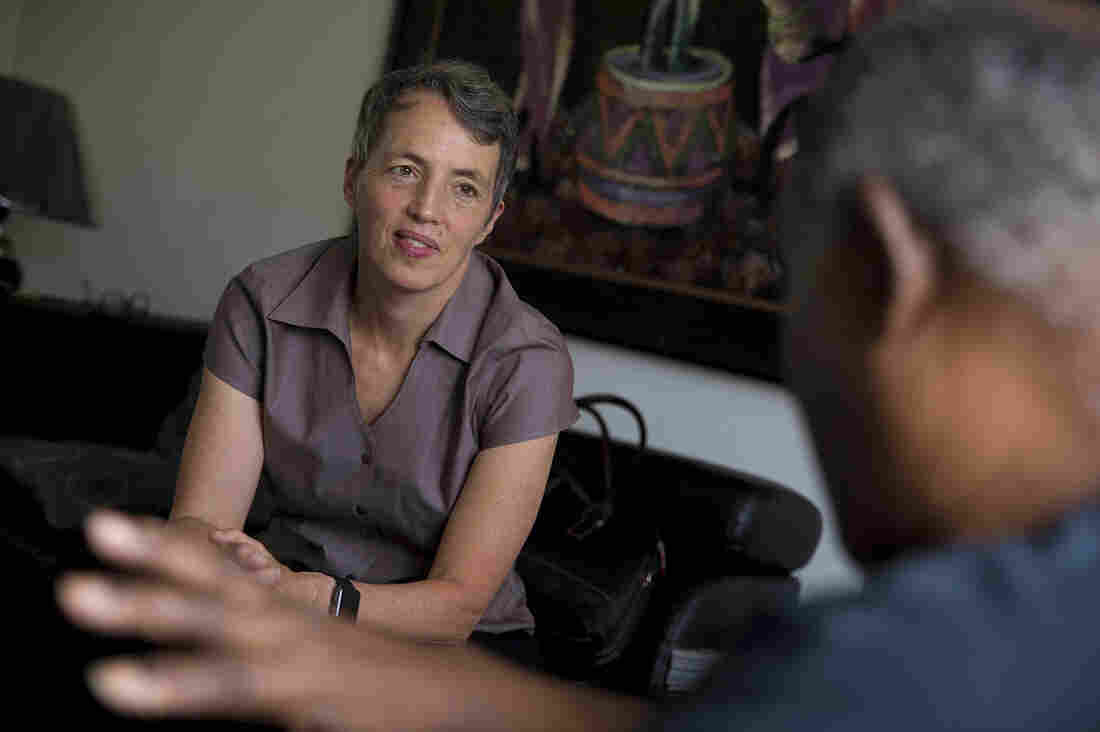 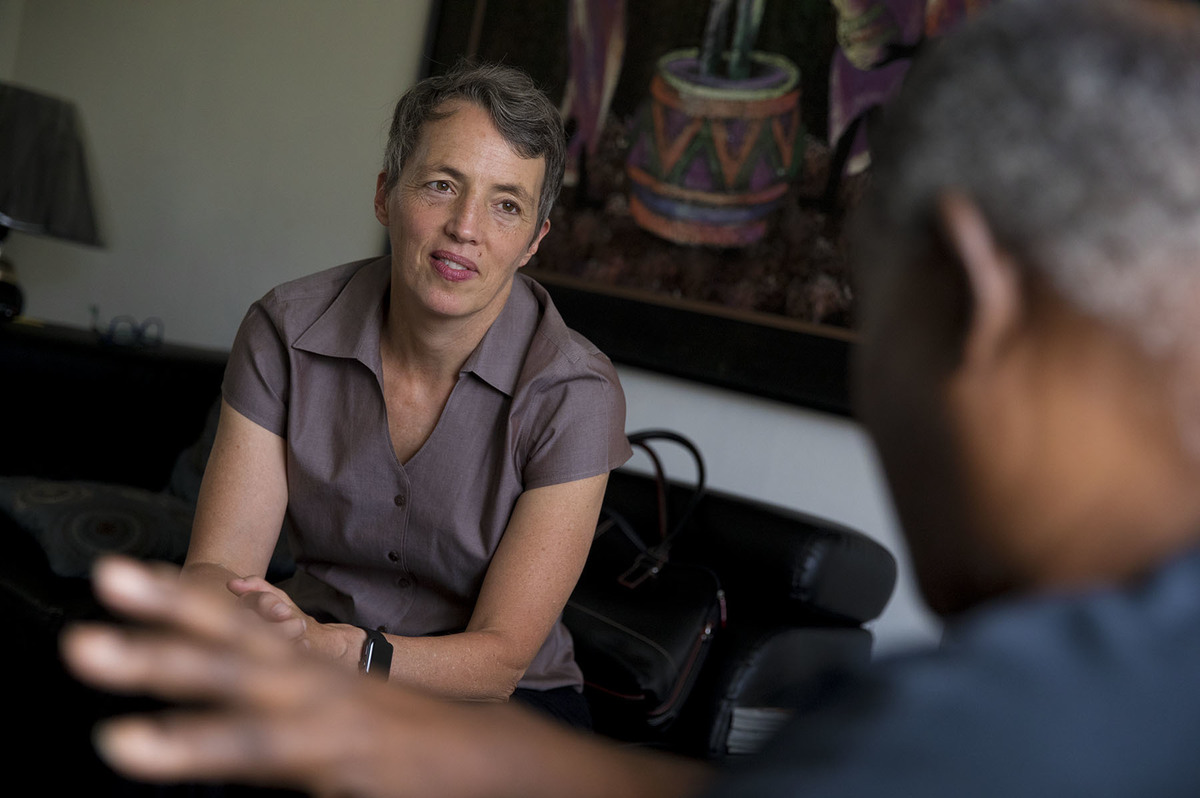 Courtesy of the Heinz Awards

"I was looking at their diseases, like diabetes, heart failure, arthritis," says Szanton, "and I realized we needed to do something more to help older adults age independently at home."

Today there are 29 CAPABLE programs in 15 states. Some are offered by private insurance Medicare Advantage plans, like the one that Givens has. Others are run by Meals on Wheels, Habitat for Humanity or local aging organizations. In most programs, an occupational therapist and a nurse make home visits over four months. Depending on the patient's goals, they figure out what home improvements are needed. Szanton says that while the programs differ slightly from place to place, studies show that CAPABLE makes a difference. 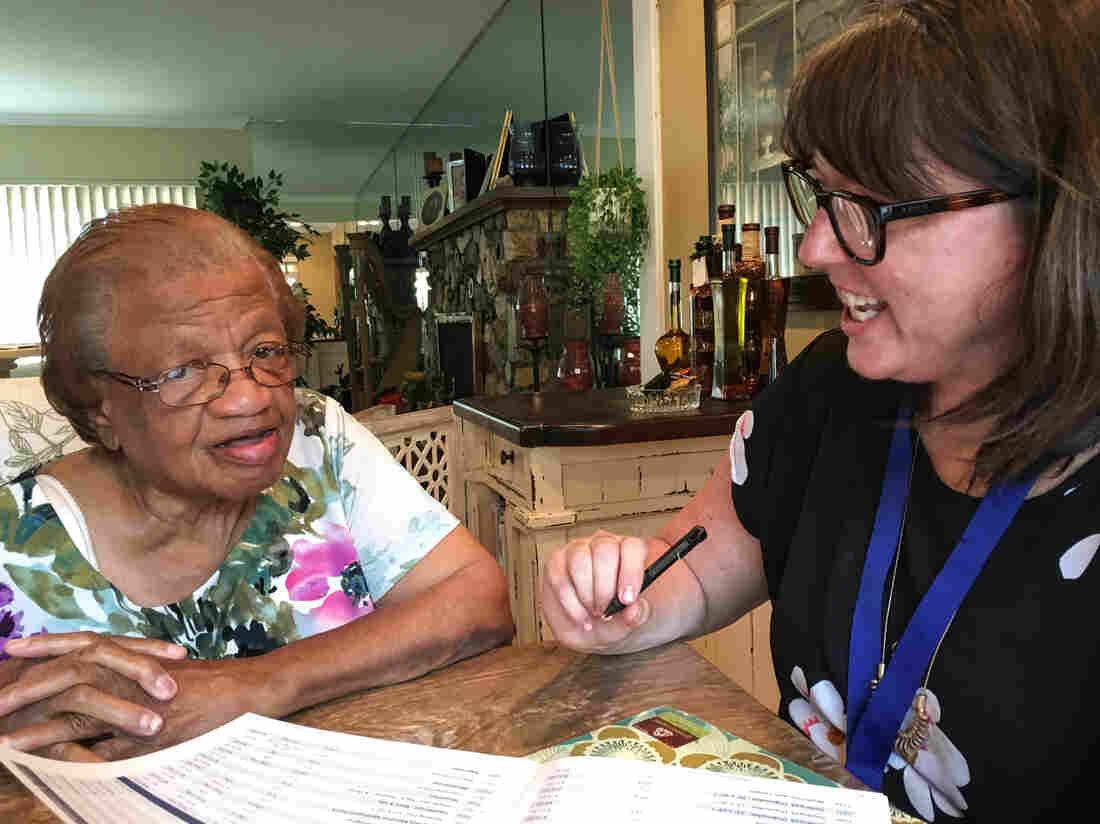 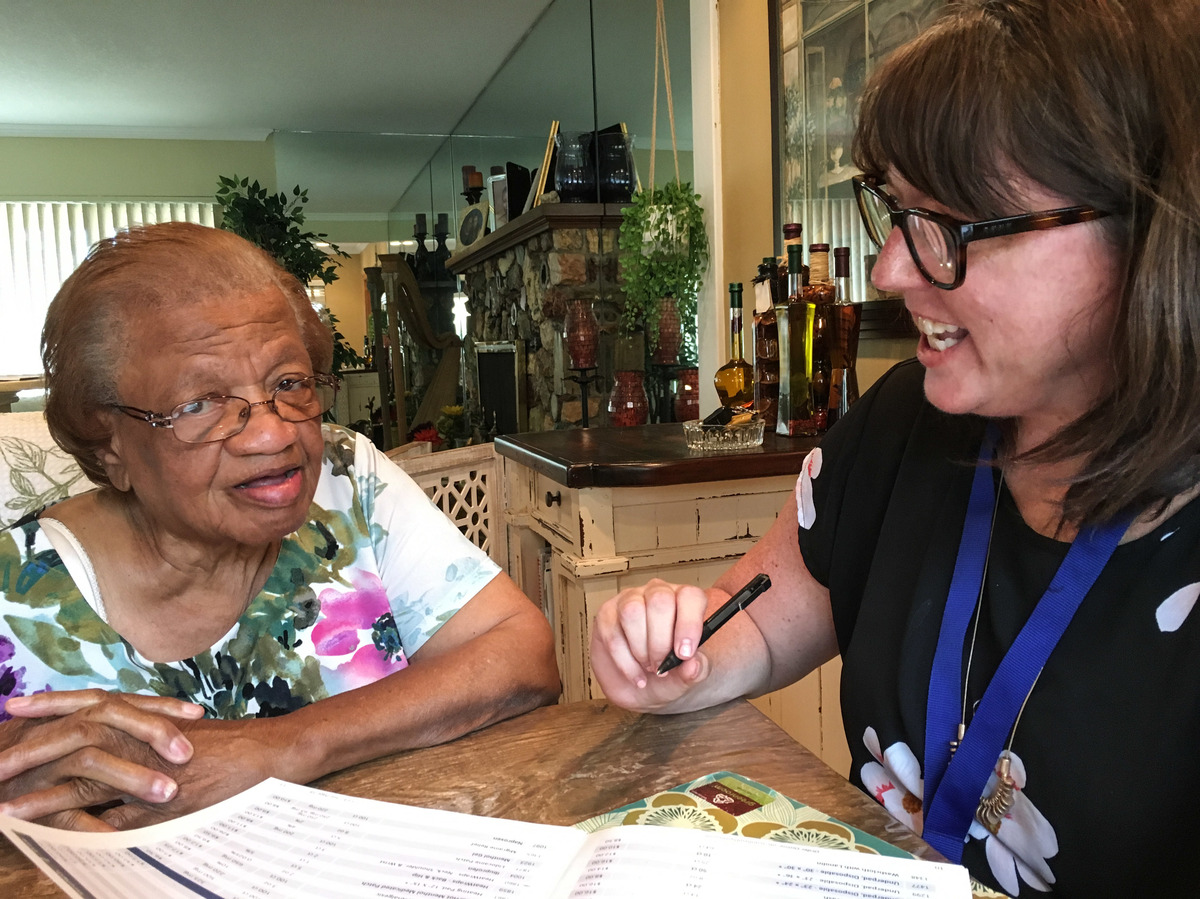 "CAPABLE is a great example of a proposal that is very creative," says Len Nichols, a health care economist at George Mason University. "A lot of stuff outside the normal medical sphere affects health and ultimately [affects] cost," he explains.

Nichols was until recently a member of a committee that makes recommendations to Medicare on new ways of offering services and new ways of paying for them. The committee evaluated CAPABLE last spring, "and we all were unanimous in supporting it going forward," says Nichols.

That's no guarantee that Medicare will someday pay for services like CAPABLE, though it would make them easier for older adults to access.

But right now, Givens is convinced it's going to work for her "with the help of the girls coming. This is motivating to me," she says.

So if you live in Riverside, Givens and her church friends may be ringing your doorbell someday soon.