Accessibility links
Some Hong Kong Protesters Are Seeking Refuge In Taiwan. For Taiwan, It's Complicated The arrival of several Hong Kong protesters has revived debate over whether Taiwan can or should accept Chinese citizens seeking safety. Taiwan has no asylum laws and attempts to pass one have failed. 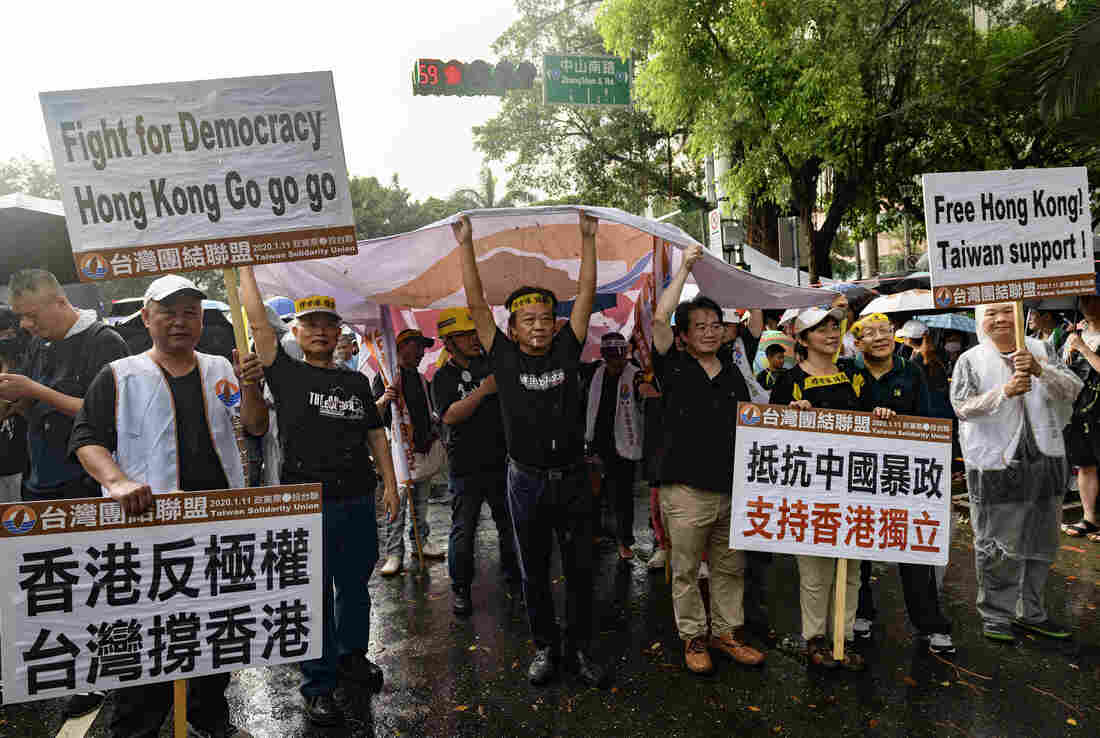 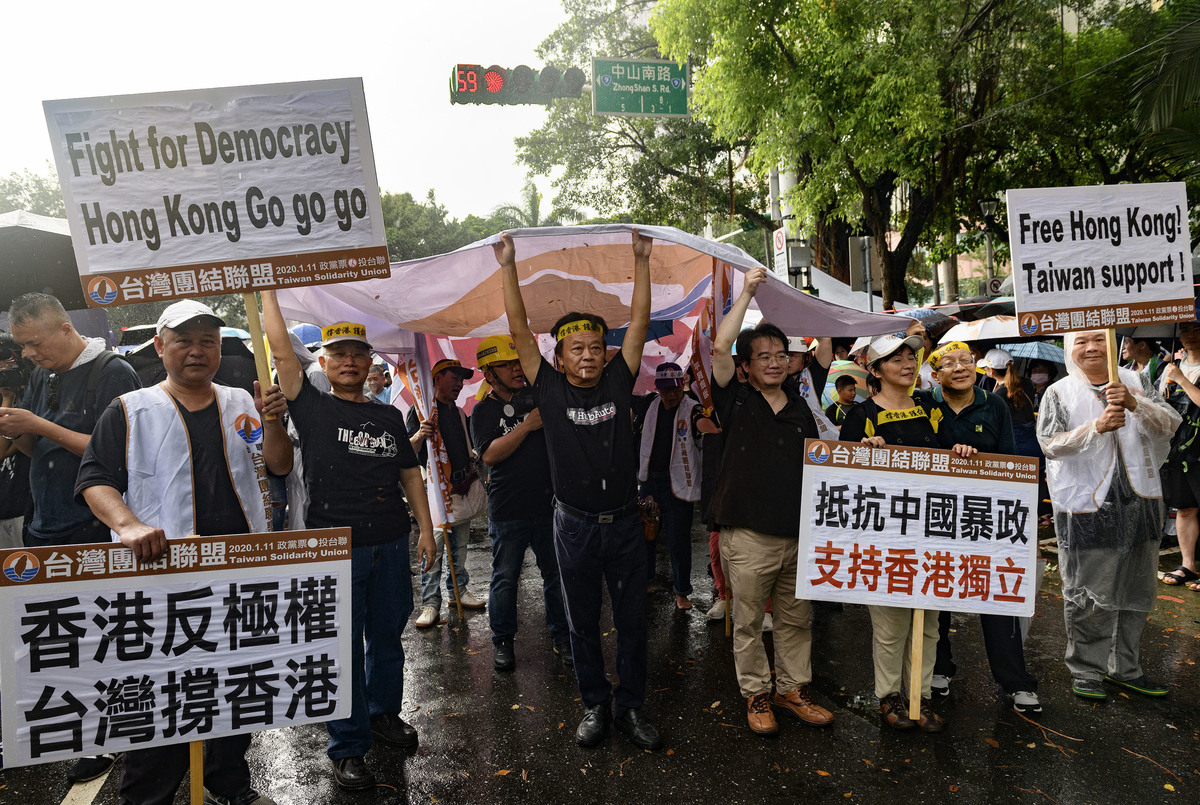 Their arrival in Taiwan has revived a fierce debate on the small, self-ruled island over whether it can — or should — accept Chinese citizens seeking safety.

Taiwan's proximity to mainland China has long made it a desired safe haven for dissidents and other Chinese looking for a better life. In the late 1980s and early 1990s, there were nearly a dozen cases of desperate mainland Chinese citizens hijacking commercial jets and crash-landing them in Taiwan, seeking asylum. Most were imprisoned in Taiwan or sent back to mainland China.

Now, as Chinese control grows over Hong Kong, Taiwan is again becoming a destination for political refugees from across greater China — especially from Hong Kong.

Taiwan is treading carefully. It is wary of provoking Beijing's ire, and fears a more permissive refugee policy will open Taiwan's doors to mainland Chinese spies and conspirators.

"China will take advantage of that kind of freedom, liberty and democracy," said Luo Chi-cheng, a lawmaker with Taiwan's majority Democratic Progressive Party. "A democracy like Taiwan has different concerns, sitting next to authoritarian China, than other ordinary democracies."

Those who do flee to Taiwan often face difficulties. Taiwan has no formal refugee law, so political refugees are unable to work legally. Many of the Hong Kong protesters, who are staying in Taiwan on monthly tourist visas, are so young they have not even graduated from high school — making them ineligible for longer-term student visas. An informal network of churches and nonprofits supports them financially, and a volunteer group of Taiwanese lawyers has pledged free legal consultation.

"Our hearts are with them"

"They were not prepared at all. They are so young," said Lam Wing Kee, one of five booksellers detained in Hong Kong and spirited into mainland China by Chinese security officers in 2015. All were accused of selling banned political books. Lam is the only bookseller who went public with allegations that he had been abducted, and he refused to be taken back to mainland China.

Lam is at the heart of Hong Kong's continuing mass anti-government protests. In April, he left Hong Kong for Taiwan, believing a proposed Hong Kong law might send him back to mainland China. The bill set off the protests roiling Hong Kong, causing Hong Kong leader Carrie Lam to shelve the legislation indefinitely. Even so, Lam is not returning to Hong Kong anytime soon.

"Hong Kong has no rule of law anymore. If I were to return, I need to guarantee I also have the freedom to leave. But I cannot guarantee my personal safety there anymore," he told NPR in an interview in Taipei, Taiwan's capital. He has become a mentor to the newest and youngest wave of Hong Kong arrivals, many of whom declined NPR's interview requests.

"When we see a very touching story of 1 million people, 2 million people coming out to fight for their freedom and democracy, of course our hearts are with them," Wu told NPR. "If [the protesters] want to stay in Taiwan for a longer period of time, we do have a legal basis for that," he says, citing Taiwan's regulations regarding Hong Kong and Macau.

These regulations contain a vague provision that allows Taiwan to provide "necessary assistance" to residents of Hong Kong or Macau "whose safety and liberty are immediately threatened for political reasons." But critics say the law does not provide implementation details and is not sufficient in providing a pathway toward legal residency for asylum seekers.

However, efforts to pass a refugee policy that welcomes all political refugees, including mainland Chinese citizens, remain unpopular. When refugee laws have been proposed, they are voted down. 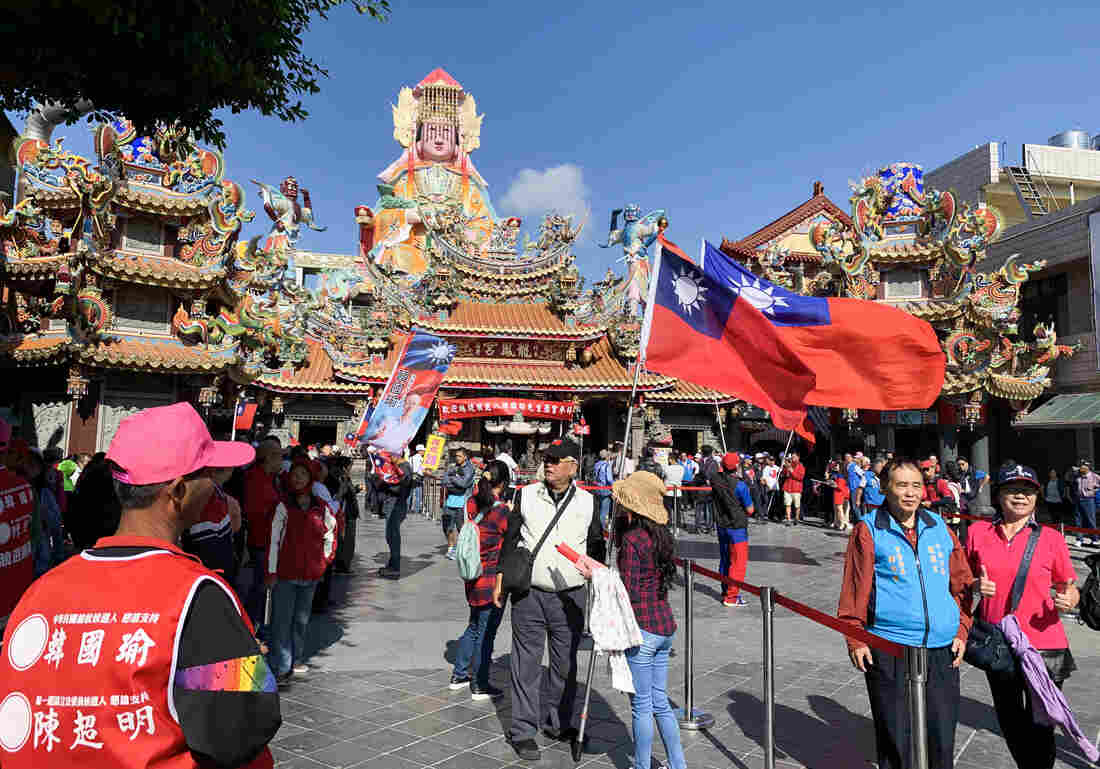 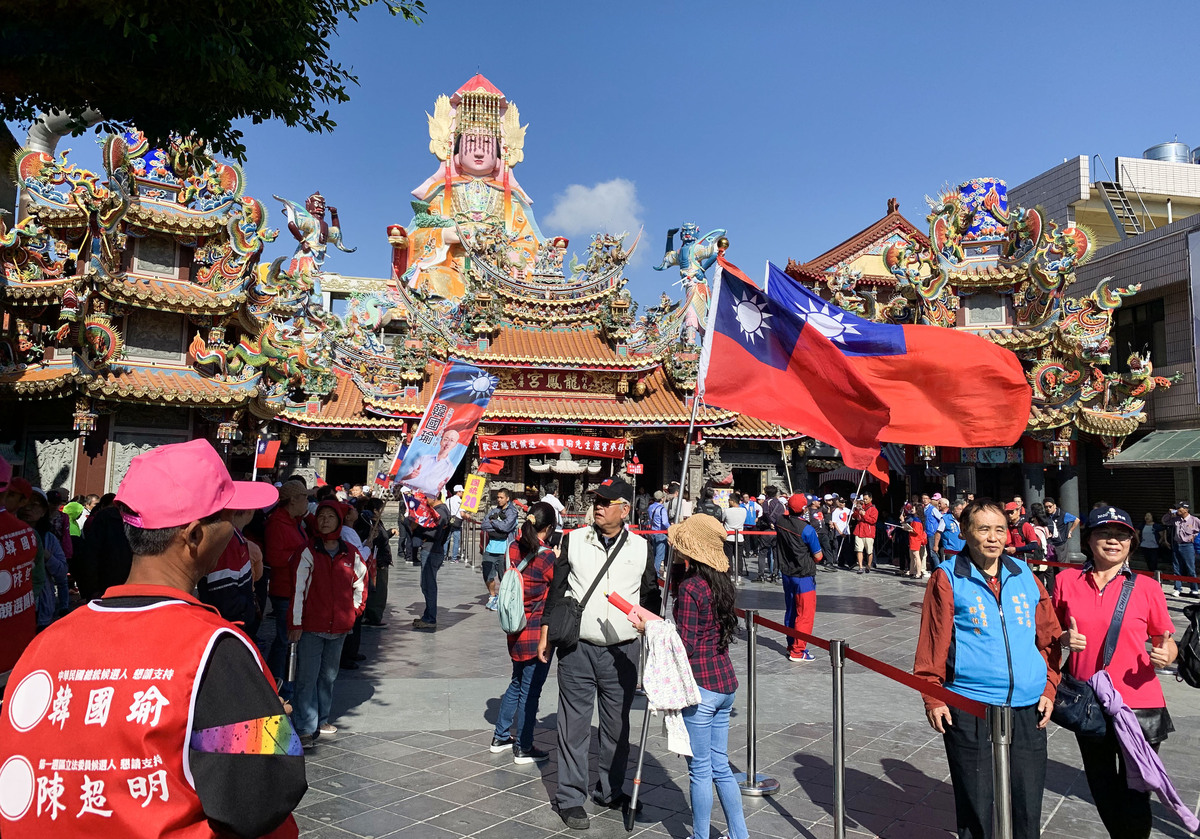 Supporters of Kuomingtang presidential nominee Han Kuo-yu ready for a campaign rally at a Hakka temple south of Taipei, the capital.

Opposition to such a policy is rooted in discrimination against mainland Chinese, who are often seen in Taiwan as ill-mannered opportunists.

"Mainland Chinese immigrants are even lazier than [Taiwanese] locals. They come [to Taiwan], and they are useless," said Guan Renjian, a newspaper commentator who has written strongly against accepting political refugees.

"They only have to send 1 million more mainland Chinese over and our democratic values would be disrupted," Guan said. "We need to have strict screening methods for immigrants and especially political refugees."

Whether to accept mainland Chinese citizens is overshadowed by historical tensions between Taiwan's indigenous residents and those who descend from the 2 million or so Chinese Nationalist soldiers and their supporters who fled to Taiwan in 1949 after losing a civil war to the ruling Chinese Communist Party. 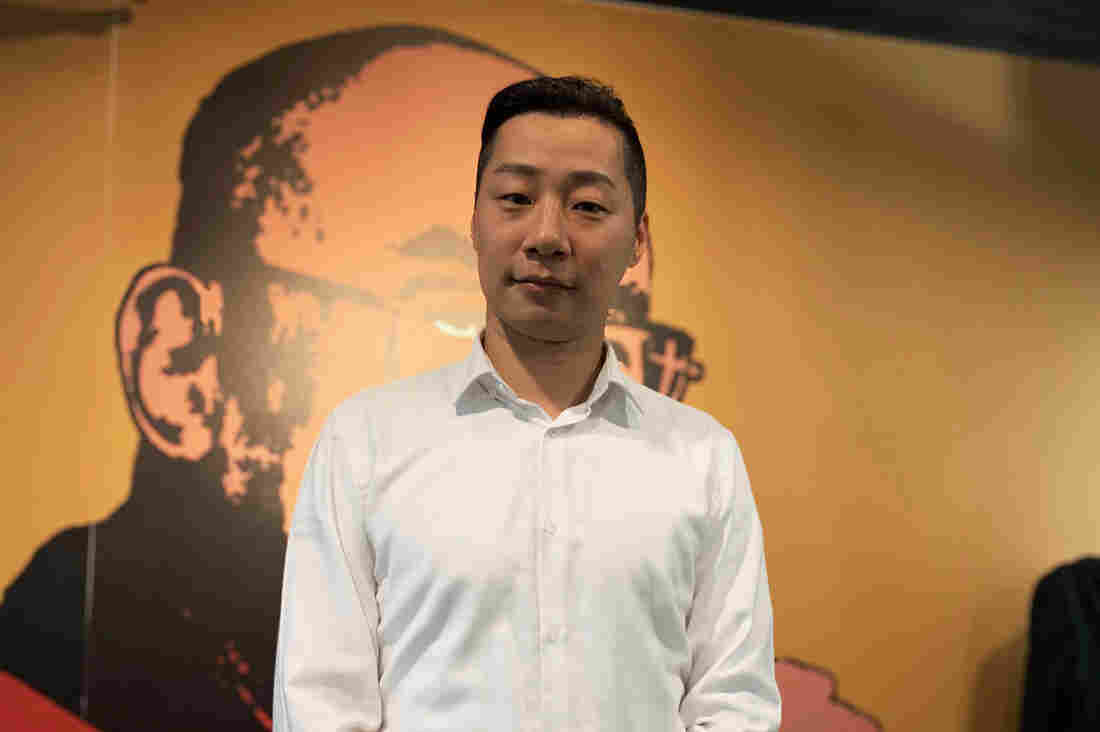 Freddy Lim, a Taiwanese death-metal rocker turned politician, helped found a political party that has made multiple refugee law proposals, all of which failed. Now running for reelection as an independent, Lim will no longer firmly commit to supporting such a law. Emily Feng /NPR hide caption 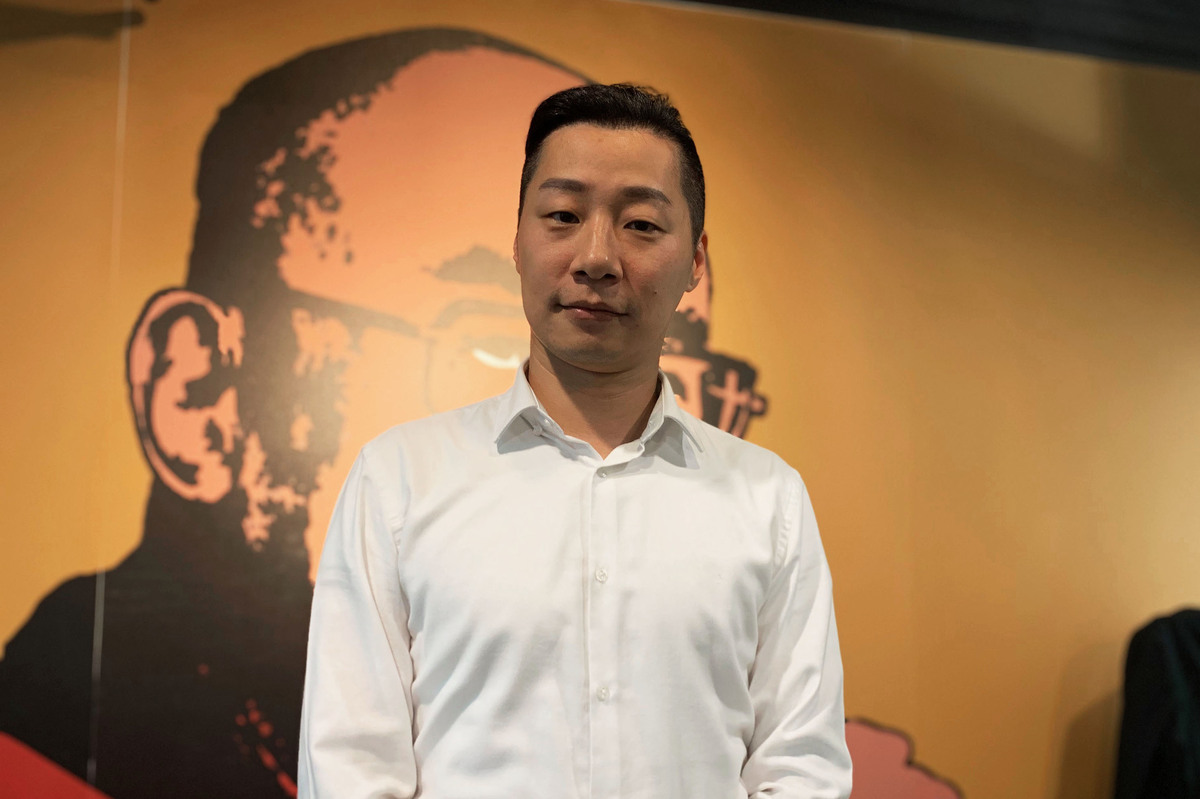 Freddy Lim, a Taiwanese death-metal rocker turned politician, helped found a political party that has made multiple refugee law proposals, all of which failed. Now running for reelection as an independent, Lim will no longer firmly commit to supporting such a law.

"A refugee law would be reminiscent of the events in 1949. Many people will say that when Taiwan received all the Nationalists that year, those political refugees mismanaged Taiwan for a long time," said Keng-Wei Chang, a Taiwanese financial entrepreneur who wrote a Facebook post criticizing a young mainland Chinese student, Li Jiabao, currently seeking asylum in Taiwan. The post was shared thousands of times.

This sort of antipathy has not stopped some mainland Chinese from seeking safe haven in Taiwan. In January, two Chinese dissidents arrived without an entry permit and were stranded in Taipei's international airport for four months before being allowed to enter on "humanitarian visas" after an outcry from local activists.

In July, a family of six from China's Sichuan province, who had arrived in Taiwan as tourists and overstayed their visas, decided not to return to mainland China, alleging they are part of a persecuted Christian congregation, the Early Rain Covenant Church.

Gong Yulian, who served two years of hard labor in China beginning 1994 for supporting mainland China's 1989 democracy movement, has been living in Taiwan since 2015.

"After being released, I was unable to stand the day-to-day monitoring, harassment, intimidation and being invited to 'drink tea' with the Chinese Communist Party," said Gong, using a euphemism for being contacted by state security.

He arrived in Taiwan while transiting through Taipei on a flight to Japan, but has been told by Taiwanese authorities he does not qualify for Taiwanese residency without a refugee law in place.

"It's not the moment"

Lawmakers from Taiwan's activist New Power Party have repeatedly and unsuccessfully proposed a refugee law — in 2016, 2017, and most recently, in July.

But because it is now election season — voters will go to the polls in January — and talk of a refugee policy is even more sensitive, Freddy Lim, a death-metal rocker who helped found the party and is running in 2020 as an independent, will no longer firmly commit to supporting such a law.

"I think it's not the moment, not the right moment, to encourage [Hong Kong protesters] to go into exile," he tells NPR, because passing a refugee law "will be like practically saying that their movement is a failure and ask them to abandon Hong Kong."

The issue is complicated by a legal twist as well. Under the complex political relationship between mainland China and Taiwan — China treats Taiwan as if it is part of China — mainland Chinese citizens are technically citizens of Taiwan, though they lack the rights of Taiwan's residents, such as the right to work and to vote.

To accept mainland Chinese formally as refugees would mean disrupting the status quo and calling China and Taiwan two separate countries, a conceptual stance that underpins Taiwan's existence, but one that Beijing and Washington do not agree with.

"The United States and China say if you dare change any of status quo, then it will be seen as a provocation," said Wuer Kaixi, who was a student leader in China's 1989 Tiananmen labor and pro-democracy movement.

Wuer has called Taiwan home for more than two decades. Like many activists, he sees the prospect of a refugee law for Hong Kong protesters and mainland Chinese dissidents as a sign of pan-Asian, democratic solidarity.

She is also one of the few candidates running for a legislative seat who supports a more concrete refugee law: "We should fight to protect democracy in Taiwan and to support Hong Kong and their people's fight for their democracy." Doing so, she says, "will help Taiwan."