Accessibility links
Review: 'Confessions Of A Dork Lord,' By Mike Johnston Our kids' books columnist Juanita Giles has a secret: Her kids don't care about Harry Potter. But they do like Mike Johnston's relatably hapless boy wizard Wick, star of Confessions of a Dork Lord. 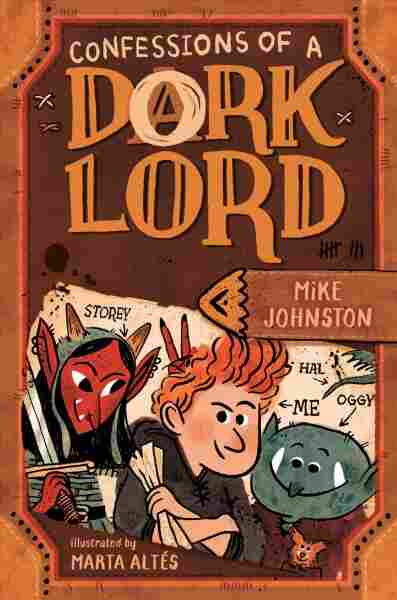 Confessions of a Dork Lord

by Mike Johnston and Marta Altés

I have a bombshell to drop.

I hope you're sitting down.

You know, Harry Potter? That series that has sold almost half a BILLION copies? Those movies that have grossed more than $7.7 billion worldwide? The franchise worth more than $25 billion?

Granted, their disinterest saves me a ton of money at Universal Studios, and I don't have to make butterbeer at home, but it certainly puts me in a bind when I'm looking for last-minute Halloween costumes or themes for birthday parties. It puts me in a bind a lot of ways, actually.

Not to tell you how old I am, but Harry Potter first made his appearance when I was already an adult, so it wasn't as if I were devastated that my kids poo-pooed books that were formative for me, but I did worry that it might be difficult to find chapter books that caught their interest. Harry Potter's success has spawned almost an entirely new genre, and sometimes it seems there's not a chapter book that doesn't involve magic or spells or curses in some way. I had almost zero experience with this, as popular chapter books for girls when I was a kid involved babysitters, teenagers with terrible diseases, or Elizabeth and Jessica Wakefield.

But durn it, I couldn't give up. How could my kids have a fulfilling childhood if Harry Potter didn't ever factor in? Would it even be possible? I wasn't convinced it was, so I set out on a mission to prepare them for their reintroduction to Harry Potter, and I ended up somewhere else entirely.

Enter the Dork Lord, son of the Dark Lord, and heir to the throne of the Grim World.

When In Doubt, Pretend To Be Todd Parr

My son keeps a basket on the end of his bed filled with whatever books with which he is currently obsessed: Wings of Fire, Calvin and Hobbes, Dog Man, Klawde, and always a Star Wars book or two. So, what did I do, sneak that I am? I shoved Confessions of a Dork Lord right into his basket when he wasn't looking.

Cut to the next morning: "Mom, this kid is called 'the Dork Lord,' can you believe it? And get this — his favorite spell is the 'Fart Revealer,' and he can't even do that right!"

If there were ever a sure way to grab a nine-year-old's attention, flatulence would be it.

Not so Azrael Bal Gorath the Wicked, Keeper of the Fountains, of Flame, Breaker of Worlds, Son of the Dark Lord Who Vanished, and Heir to the Throne of Black and Broken Glass, a.k.a. Wick, a.k.a. the Dork Lord. While Harry has a scar, Wick has allergies. Harry is a star Quidditch player, Wick ranks AFTER last place in the Castle Ogres' Index of Muscle, Mayhem, and Magic.

Harry and Wick both have deceased parents and destinies to fulfill, but frankly, Wick's chronic ineptitude and haplessness in the classroom (I'm being generous — when Wick casts a spell that hog ties his instructor, it's because he was feeling sorry for himself and not paying attention, so "haplessness" may not cover it), and less than super-sorcerer best friend Oggy don't exactly set him up to take The Nightshadows Academy for the Grim and Dreadful by storm. Wick is a mess: He's unpopular, he's a terrible student, he's tragically under-achieving, and he seems to be surrounded by a plethora of bad smells.

Wick is no Harry Potter.

Actually, Wick is who Harry Potter would be if Harry Potter were a real kid, and that's the appeal. My son is at the age when popularity is becoming a "thing," and showing human foibles is the easiest way to become uncool. Sure, flatulence is funny, but not when it's your own. (Poor Wick) And what's worse? Messing up every spell, or being too afraid to try to cast one in the first place?

Despite all his shortcomings, poor Wick must find a way to fill the Dark Lord's shoes, and the Dork Lord could easily turn into another "I'll find my inner cool self and then everyone will love me and I will be just as dark and terrible as my dad as I always knew I could be" kind of story, but it doesn't. Yes, Mike Johnston does ultimately turn Wick's weaknesses into strengths, but the payout is not the vanquishing of a villain with no nose, oh no, it's nothing that heroic at all. This is Wick we are talking about, and he wasn't dubbed the Dork Lord for nothing. (Poor Wick)

Not to spoil it, BUT, that Castle Ogres' Index of Muscle, Mayhem, and Magic contest?

Wick ends up SECOND to last at the end.

That may not sound like much, but when you're in the fourth grade and trying to conquer multiplying really big numbers AND figure out what a preposition is AND trying not get your teeth knocked out in extreme dodgeball, any little improvement has to be celebrated. Because for my kid, and probably a lot of others, the epic journey of being "okay" can be a lot more riveting than the epic journey of a hero.

Don't worry, Harry. I'm sure your day will come. I'm still working on it.