Accessibility links
President Trump Pardons Thanksgiving Turkeys — Why Are Turkeys Pardoned? The practice doesn't go back as far as you might think and has been sustained by a special interest group — the turkey lobby.

Listen · 3:35 3:35
President Trump Pardons Pair Of Turkeys — The Strange Truth Behind The Tradition 3:35 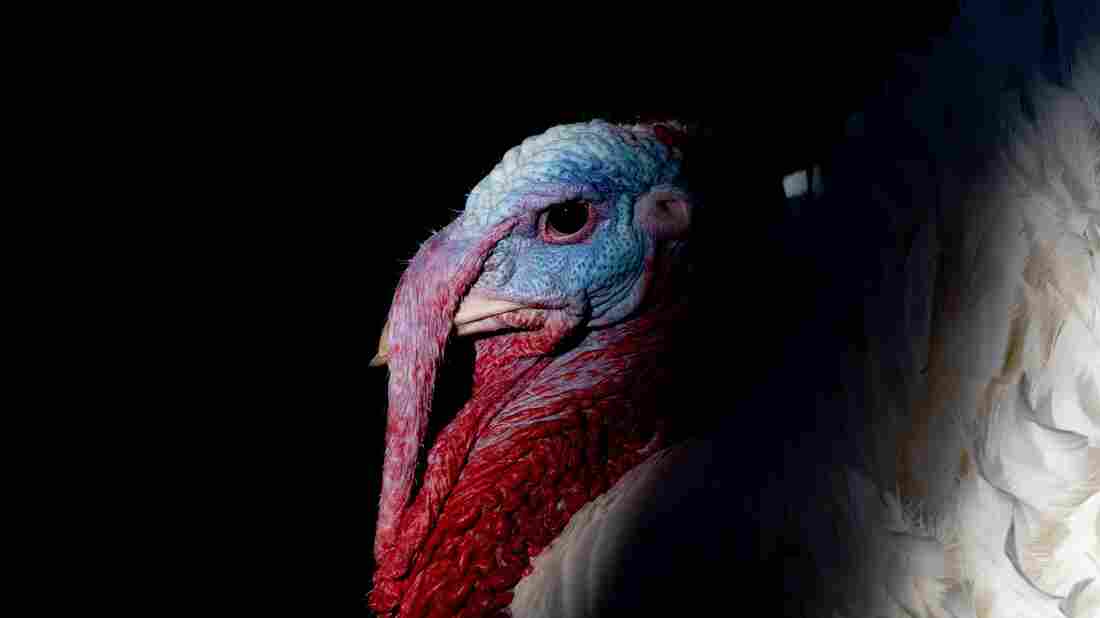 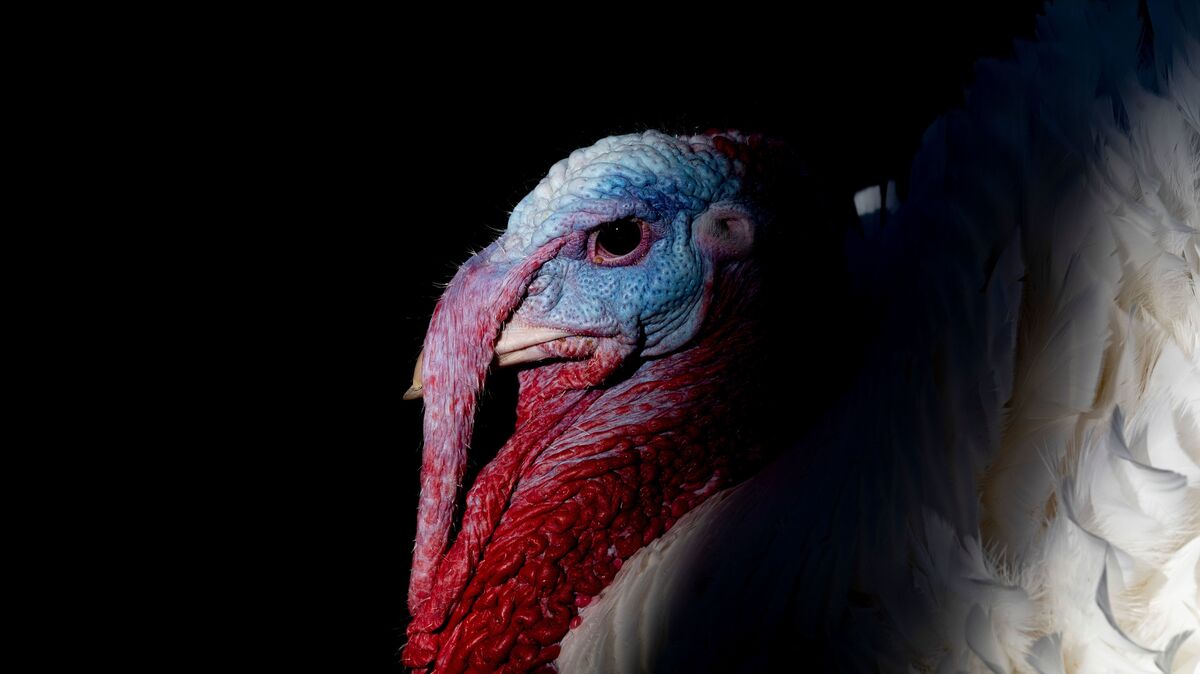 "Butter" the turkey waits for President Trump's pardon Tuesday at the White House.

Once again, for this week of Thanksgiving, a U.S. president "pardoned" turkeys.

"Butter, I hereby grant you a full and complete pardon," President Trump said, continuing the tradition and addressing a turkey named Butter. "Full and complete."

The president also falsely said, however, "It is said Abraham Lincoln was the first to pardon a Thanksgiving turkey." (He was the first to spare a turkey, but it was a Christmas turkey. More below.)

The presidential turkey pardon is a strange, misunderstood and, as is evidenced by Trump's misstatement, confusing tradition. It's also one that doesn't go back as far as you might think.

But why do they do it, you ask? Good question. It's one your author has been asking for 10 years now. And we have answers, including when all this started and who the first president was to pardon a turkey.

First, understand, this event has been sustained by a special interest group — the turkey lobby. The National Turkey Federation, whose website is literally EatTurkey.org, sponsors the event and has spent almost $3 million on lobbying efforts since 1998, according to a search of the Center for Responsive Politics' lobbying database. 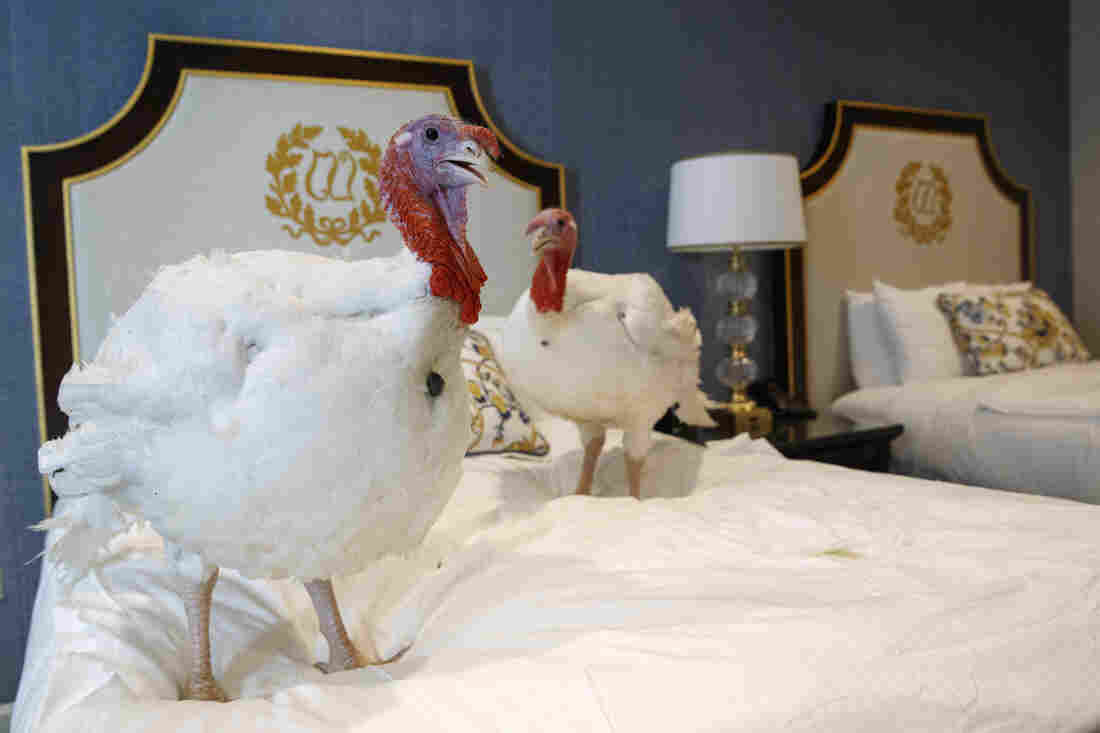 Two male turkeys from North Carolina named Bread and Butter hang out in their hotel room at the Willard InterContinental Hotel in Washington, D.C., ahead of Tuesday's pardoning. Jacquelyn Martin/AP hide caption 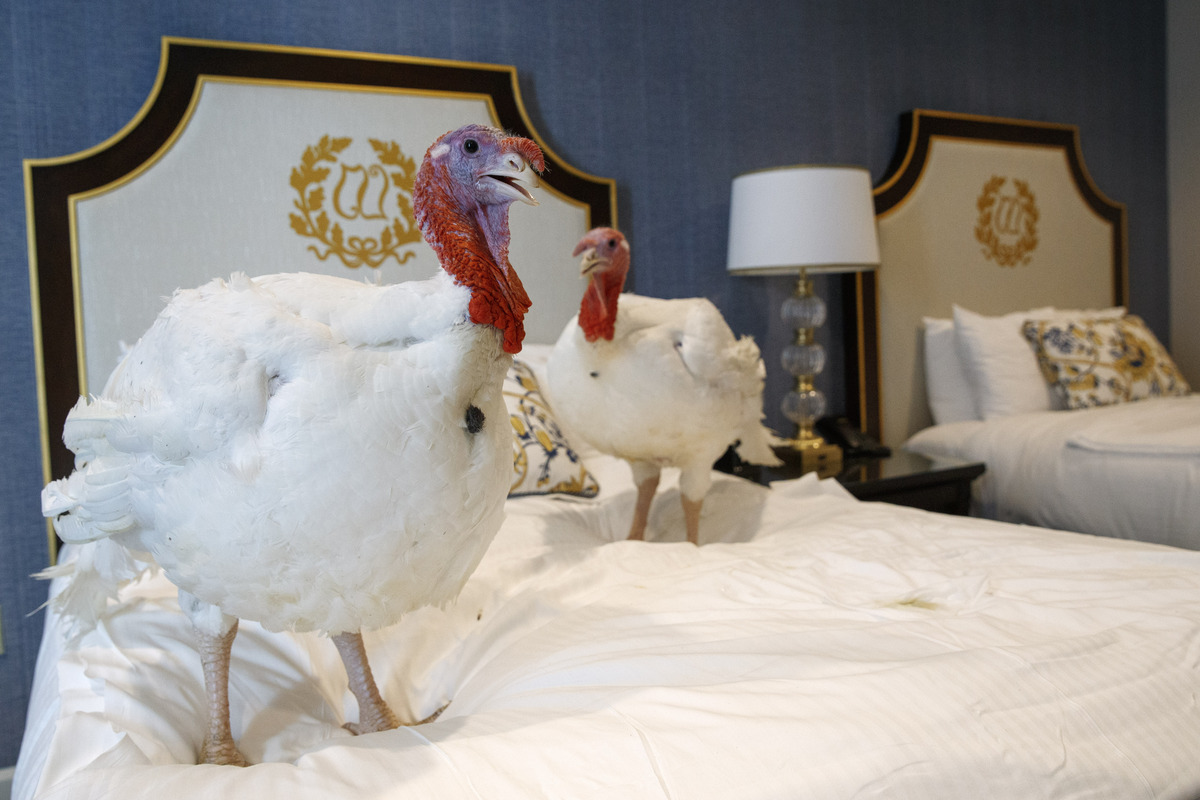 Two male turkeys from North Carolina named Bread and Butter hang out in their hotel room at the Willard InterContinental Hotel in Washington, D.C., ahead of Tuesday's pardoning.

Big Turkey has been giving turkeys to presidents since 1947. But these turkeys were originally meant to be eaten, not pardoned.

The first Thanksgiving turkey on record to receive a reprieve was in 1963 when President John F. Kennedy received a 40-pound turkey with a sign around its neck that read, "GOOD EATING, MR. PRESIDENT!" 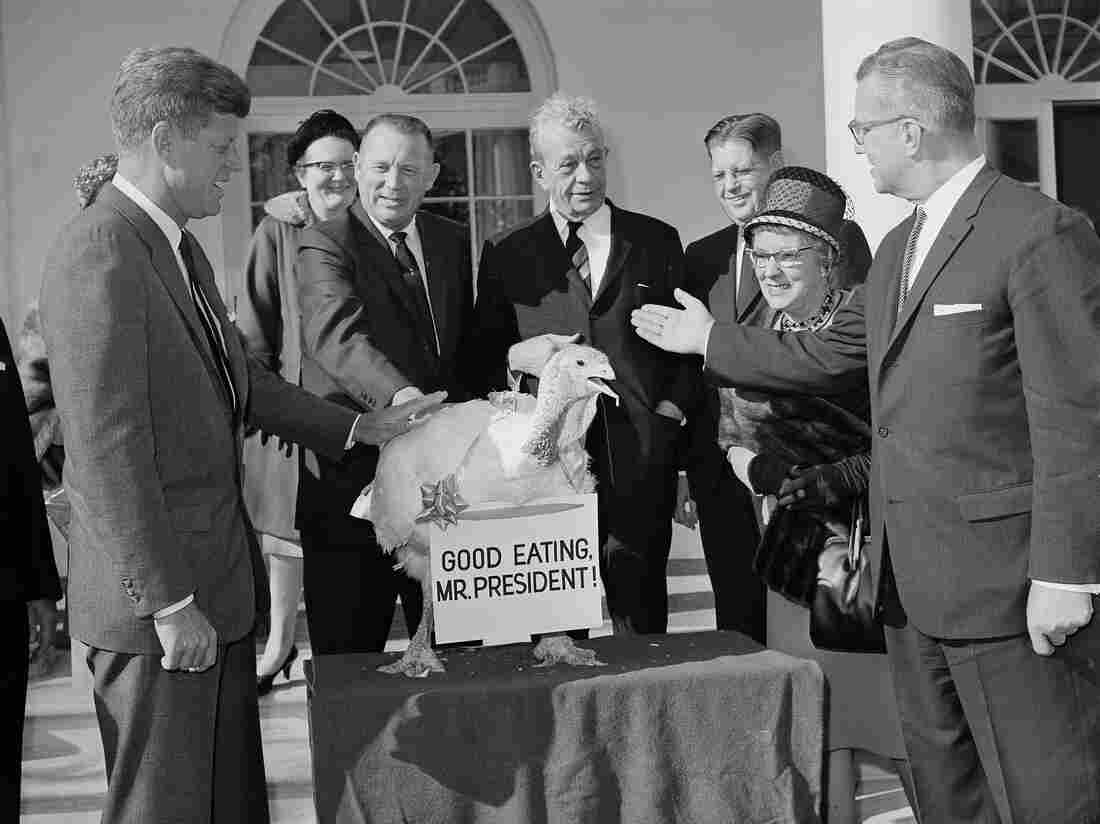 President John F. Kennedy reaches out to touch a turkey presented to him at the White House from the turkey industry. Harvey Georges/AP hide caption 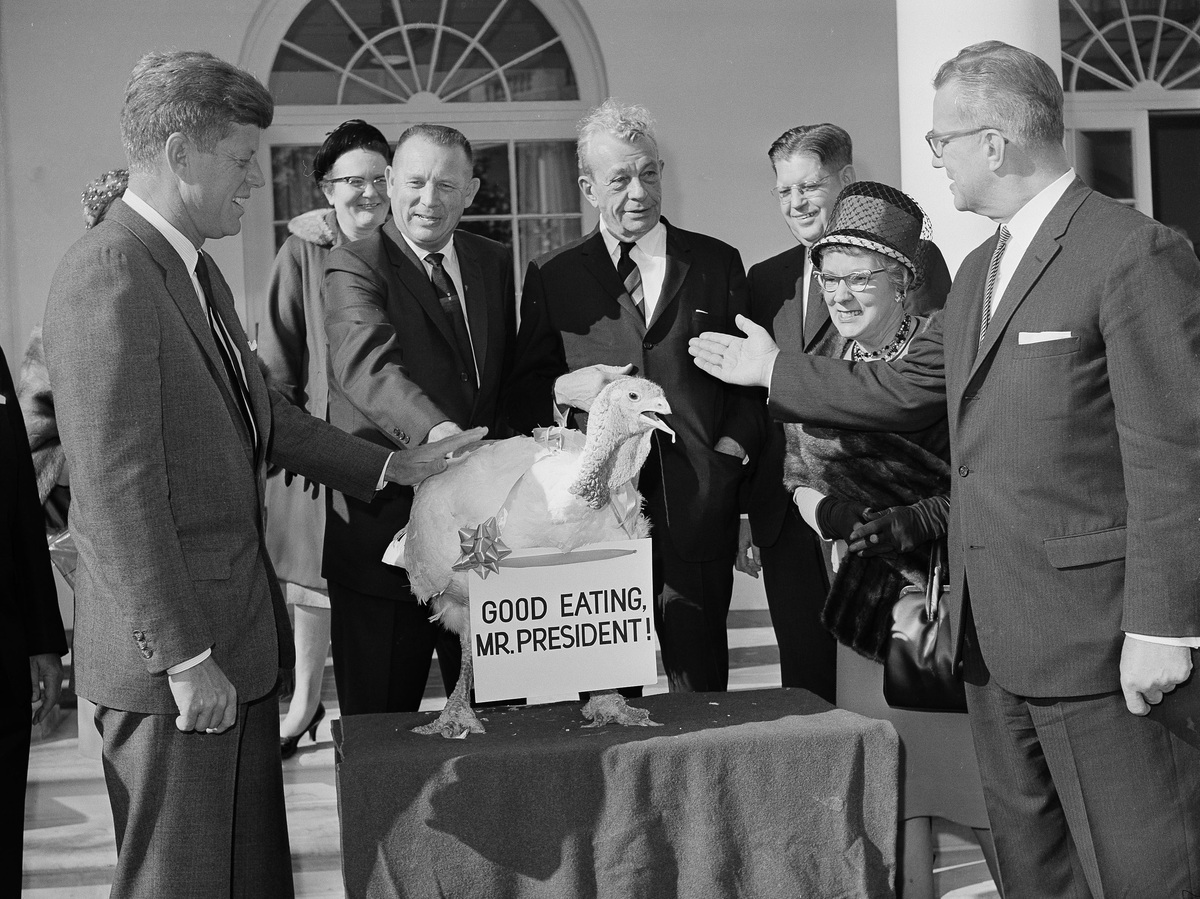 President John F. Kennedy reaches out to touch a turkey presented to him at the White House from the turkey industry.

A Los Angeles Times article from Nov. 20, 1963, about the event the day before was headlined: "Turkey gets presidential pardon."

A hundred years before that, there is record of Lincoln "pardoning" a turkey, but it had been meant for Christmas dinner, not Thanksgiving.

"[A] live turkey had been brought home for the Christmas dinner, but [Lincoln's son Tad] interceded in behalf of its life. ... [Tad's] plea was admitted and the turkey's life spared," according to an 1865 dispatch from White House reporter Noah Brooks, according to the White House Historical Association.

A deflection from a scandal

Kennedy never used the word pardon when referring to his bird. The first president to do so in referring to letting a turkey go was Ronald Reagan — and it was a joke deflecting from the Iran-Contra scandal.

During the yearly turkey presentation in 1987, ABC News' Sam Donaldson pressed Reagan on whether he would pardon two key players involved in the weapons sale, Oliver North and John Poindexter.

Reagan was already set to let the turkey presented to him go to a petting zoo, as Nixon had previously, and answered: "If they'd given me a different answer on Charlie and his future, I would have pardoned him." 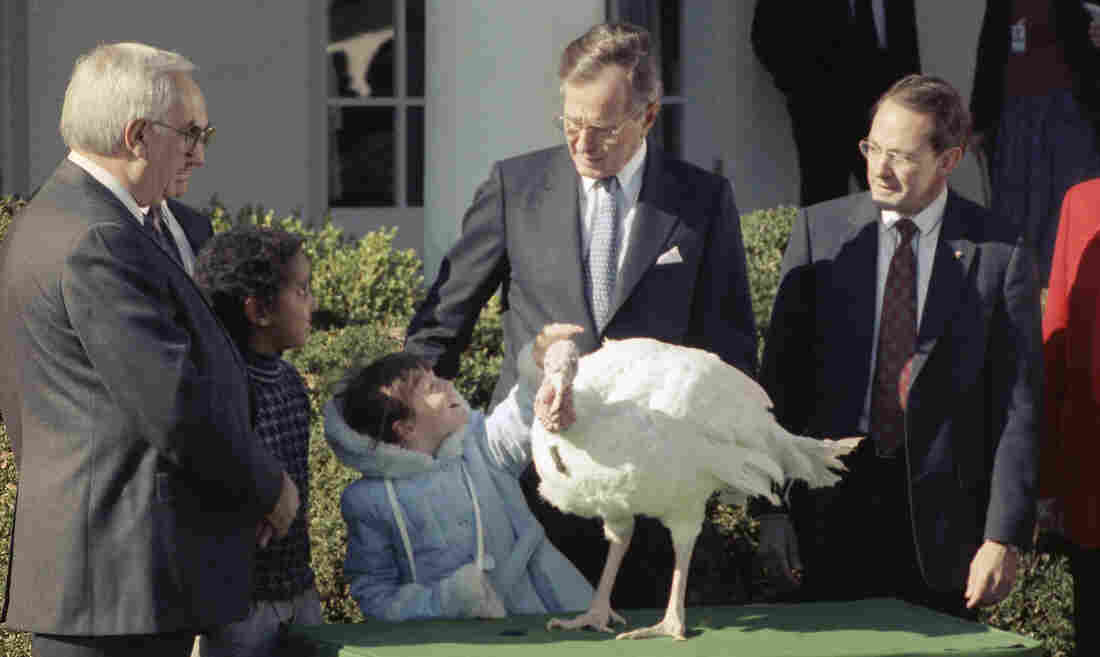 President George H.W. Bush and Shannon Duffy, then 8, of Fairfax, Va., look over a Thanksgiving turkey in 1989. The 50-pound bird is the first to be officially pardoned by a president. Marcy Nighswander/AP hide caption 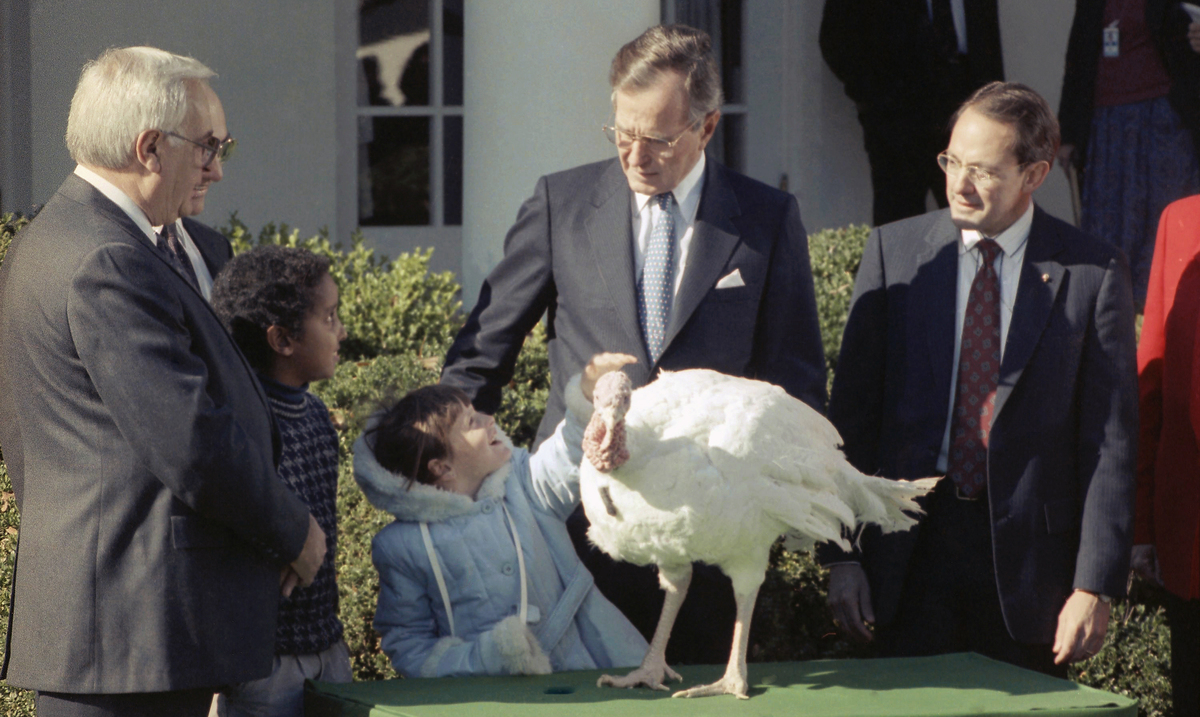 President George H.W. Bush and Shannon Duffy, then 8, of Fairfax, Va., look over a Thanksgiving turkey in 1989. The 50-pound bird is the first to be officially pardoned by a president.

After that informal use of the word, the event was formalized by his vice president, George H.W. Bush, in his first year as president.

"[L]et me assure you, and this fine tom turkey, that he will not end up on anyone's dinner table, not this guy," Bush said in 1989. "He's granted a presidential pardon as of right now — and allow him to live out his days on a children's farm not far from here."

One of today's turkeys will be spending the rest of its — perhaps limited — days at "Gobbler's Rest" at Virginia Tech University's Department of Animal and Poultry Science.

"Virginia Tech has a long tradition of supporting the turkey industry through research and outreach," Rami Dalloul, a Virginia Tech professor, said in a press release. "So it's fitting that the Presidential Turkeys becoming part of the Hokie Nation is a new tradition."

Dalloul, Virginia Tech says, is "a world-renowned poultry immunologist who a few years ago sequenced the turkey genome."

It's the fourth consecutive year the pardoned turkey will head there. Despite a White House contest about which turkey should be pardoned, Bread or Butter, both birds were expected to be spared and they were. It's something presidents have done for the past few years. The White House is using the "contest" to build its email list.

(People will be able to meet the pardoned turkeys on Sunday from noon to 4 p.m. ET at the Livestock Judging Pavilion in Blacksburg, Va. So if you're near Virginia Tech with the kids this weekend ....)

Previous turkeys have gone to Disneyland and the unfortunately named Frying Pan Park in Virginia.

There has been some confusion about the history of the presidential turkey pardon, sowed by none other than a president who was pardoning a turkey.

"Let me thank again the National Turkey Federation on their Golden Anniversary for donating a Thanksgiving turkey to the White House every year for 50 years," President Bill Clinton said in 1997. "That's right, now this marks the 50th year when we give one more turkey in Washington a second chance."

Funny line, but it's not true.

Clinton then added more explicitly, "President Truman was the first president to pardon a turkey."

Also false. The Truman Library disputed this in 2003, writing:

"The Library's staff has found no documents, speeches, newspaper clippings, photographs, or other contemporary records in our holdings which refer to Truman pardoning a turkey that he received as a gift in 1947, or at any other time during his Presidency. Truman sometimes indicated to reporters that the turkeys he received were destined for the family dinner table."

Big Turkey may have gotten involved in 1947, but the tradition of sending turkeys to presidents (for their eating) goes back at least 73 years before the industry's involvement.

Harold Vose of Rhode Island, a man known then as the "Poultry King," sent unofficial Thanksgiving and Christmas turkeys to the White House from 1873 until Vose's death in 1913, according to the White House Historical Association.

After that, the turkeys came flying from all around the country. The White House Historical Association notes:

"In 1921, an American Legion post furnished bunting for the crate of a gobbler en route from Mississippi to Washington, while a Harding Girls Club in Chicago outfitted a turkey as a flying ace, complete with goggles. First Lady Grace Coolidge accepted a turkey from a Vermont Girl Scout in 1925."

Bread and Butter, this year's turkeys

This year's turkeys come from a turkey farm in North Carolina — and they stayed at a fancy hotel in Washington, as in past years.

You can’t go on a road trip with your squad! @butterball grower Wellie Jackson and his son and @AmericanHumane’s Dr. Hoenig are driving up from North Carolina with the turkeys. #PresidentialTurkey #squadgoals pic.twitter.com/wzjQH54iTs

The White House claims Bread loves "college basketball and a cold Cheerwine," while Butter is a bagpipes, sweet potato fries and NASCAR fan.

"Butter" likes to snack on sweet potato fries and is currently training for a personal best in the turkey trot.

During his pardoning ceremony, Trump had impeachment on his mind and couldn't help but take a jab at Democrats.

"Bread and Butter have been specially raised ... to remain calm under any condition, which will be very important," Trump said, "because they've already received subpoenas to appear in Adam Schiff's basement on Thursday. It's true. Hundreds of people have. It seems the Democrats are accusing me of being too soft on turkey, but Bread and Butter, I should point out that unlike previous witnesses, you and I have actually met. It's very unusual."

One thing is clear: This season of impeachment is a good reminder that presidents will have a hard time letting go of this pardon power.