Accessibility links
After 36 Years In Prison For 'Georgetown Jacket' Murder, 3 Men Are Exonerated At Last "I've been always dreaming of this. For this day," said Alfred Chestnut, now 52. The Maryland men were freed after investigators found police and prosecutorial misconduct in the 1983 case.

After 36 Years In Prison For 'Georgetown Jacket' Murder, 3 Men Are Exonerated At Last

After 36 Years In Prison For 'Georgetown Jacket' Murder, 3 Men Are Exonerated At Last 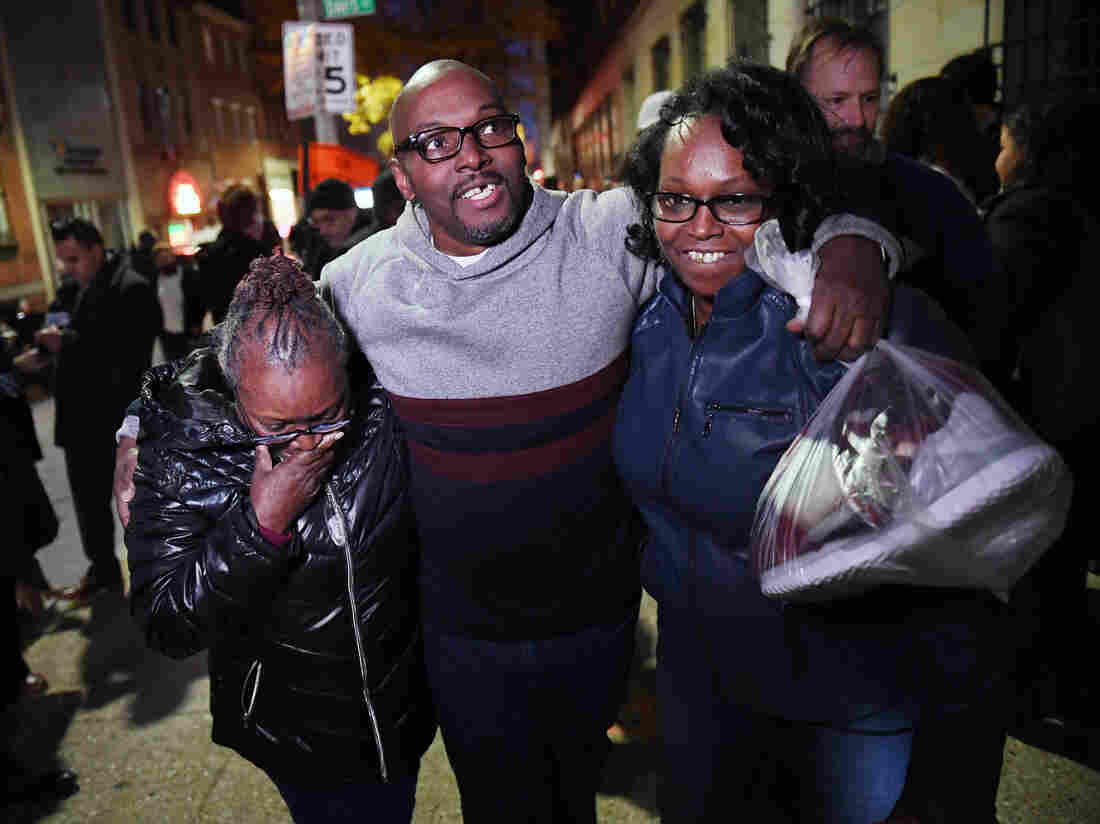 Andrew Stewart (center) walks with his mother and sister on Monday after he and two other black men were exonerated in a 1983 murder for which they were sentenced to life in prison. Matt McClain/The Washington Post via Getty Images hide caption 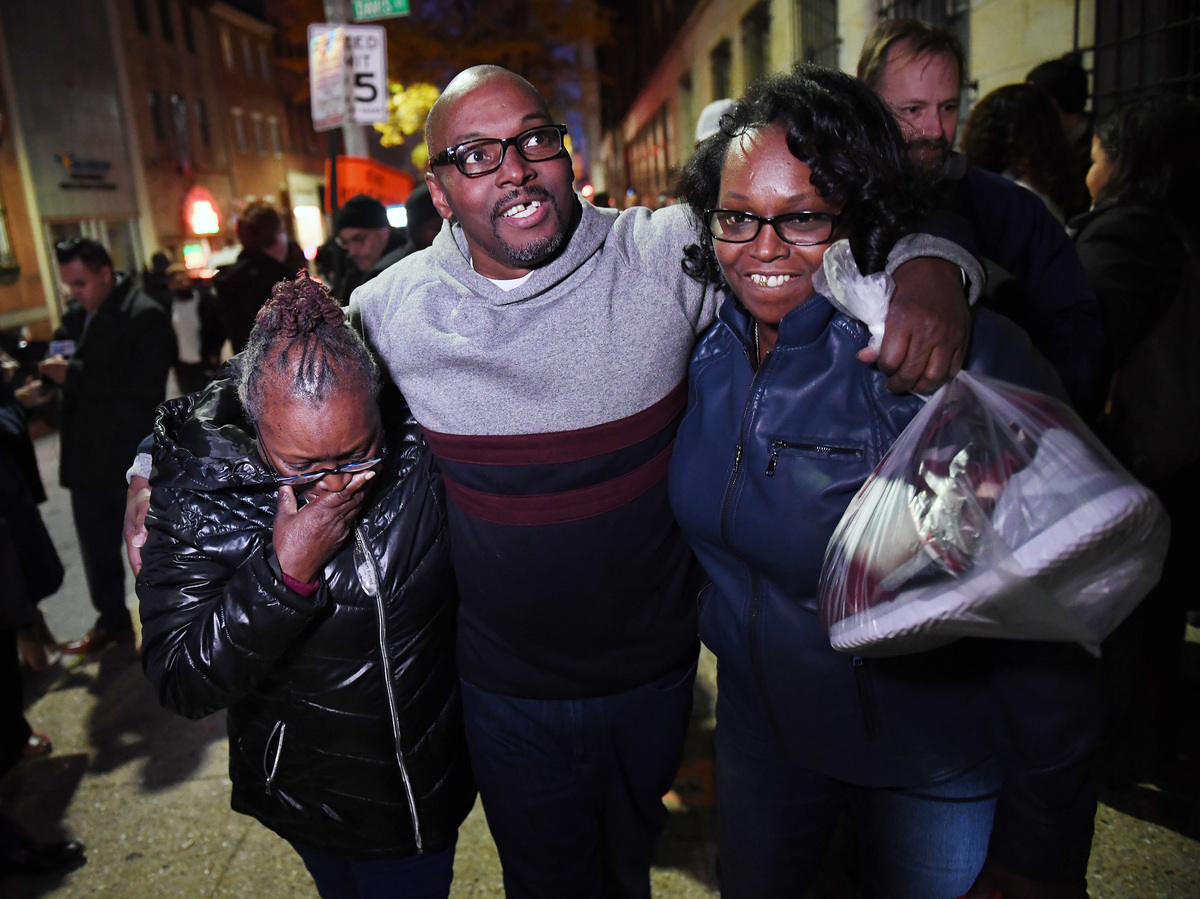 Andrew Stewart (center) walks with his mother and sister on Monday after he and two other black men were exonerated in a 1983 murder for which they were sentenced to life in prison.

In November 1983, 14-year-old DeWitt Duckett was shot in the neck in a Baltimore high school over his Georgetown Starter jacket.

Three 16-year-old boys were arrested on Thanksgiving Day 1983 and charged with the murder. Alfred Chestnut, Ransom Watkins and Andrew Stewart were convicted and sentenced to life in prison.

The three, now in their 50s, were all released from prison on Monday — fully exonerated after spending 36 years incarcerated for a murder they didn't commit.

"On behalf of the criminal justice system, and I'm sure this means very little to you, I'm going to apologize," Baltimore Circuit Court Judge Charles Peters said. People in the courtroom erupted in applause as he declared them innocent, The Washington Post reports.

In May, Chestnut had written a letter to Baltimore State's Attorney Marilyn Mosby, along with evidence incriminating the man now believed to have been the actual shooter, and asked for her office's Conviction Integrity Unit to reexamine the case as a wrongful conviction.

Investigators reinterviewed witnesses and looked anew at the evidence, and Mosby's office says the findings were troubling: Witnesses were coached and coerced by investigators to say they'd seen the three, after twice failing to pick them out of a lineup. Witnesses identified a different young person as the shooter, but police instead focused on Chestnut, Watkins and Stewart. Defense attorneys had asked for evidence that might exonerate their clients, but prosecutors had said they had none.

The man now suspected of committing the murder was shot to death in 2002.

"Present day, all four of those witnesses have recanted," Assistant State's Attorney Lauren Lipscomb told the judge, according to The Baltimore Sun. "There is evidence of coerced pretrial preparation. ... One former student told the state that they were told quote 'Get with the program.' "

Standing next to the three black men on Monday, Mosby apologized on behalf of the Office of the State's Attorney for Baltimore City for the miscarriage of justice.

"Today isn't a victory. It's a tragedy that these three men had 36 years of their life stolen from them," Mosby said. "On behalf of the State's Attorney Office, let me say to these three men, I am sorry. The system failed you. You should never have seen the inside of a jail cell."

The 1983 murder was notorious. As the Sun notes, Duckett's death "became another cautionary tale in a wave of so-called 'clothing murders,' cases where city youth were gunned down over sneakers or sports apparel. Duckett's murder drew widespread attention and Baltimore Sun reporter David Simon mentioned the case in his book 'Homicide.' "

The exonerations bring to nine the number of people freed since 2015 owing to the efforts of the Conviction Integrity Unit, a division dedicated to uncovering wrongful convictions. The unit is funded by a federal grant and works in partnership with the Mid-Atlantic Innocence Project and the University of Baltimore's Innocence Project Clinic.

"These three men were convicted, as children, because of police and prosecutorial misconduct. What the state, my office, did to them is wrong. There is no way we can ever repair the damage done to them. We can't be scared of that and we must confront it," Mosby said. "I want to thank these men from the bottom of my heart for persevering for decades to prove their innocence. They deserve so much more than an apology."

Mosby says she will push for state legislation that would require the state to provide compensation for exonerees.

Free at last on Monday, the three men hugged their families and loved ones and began their new lives.

"I'm going to spend Thanksgiving with my mama," Stewart said. "And live a normal life." He said his journey is just beginning. "I got to learn how to live right now."

"You see us out here, we're smiling. We're happy that we're free, but we've got a lot to fix," he said, touching his heart. "This should have never happened."

And Chestnut, who never gave up hope, said he looks forward to spending the rest of his life praising God and taking care of his family. "I've been always dreaming of this," he said. "For this day."