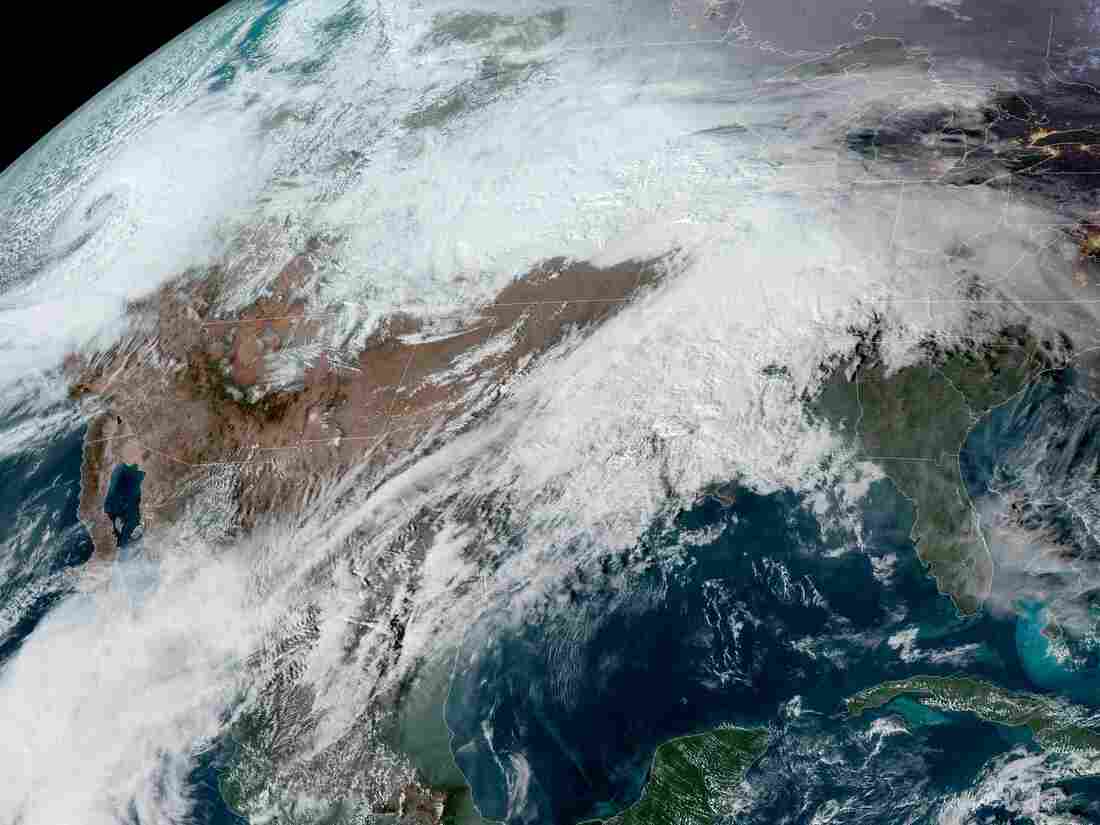 "Two back to back powerful storms will produce widespread heavy snow" in parts of the western and central U.S., the National Weather Service says. NOAA/NESDIS/STAR/GOES-East hide caption 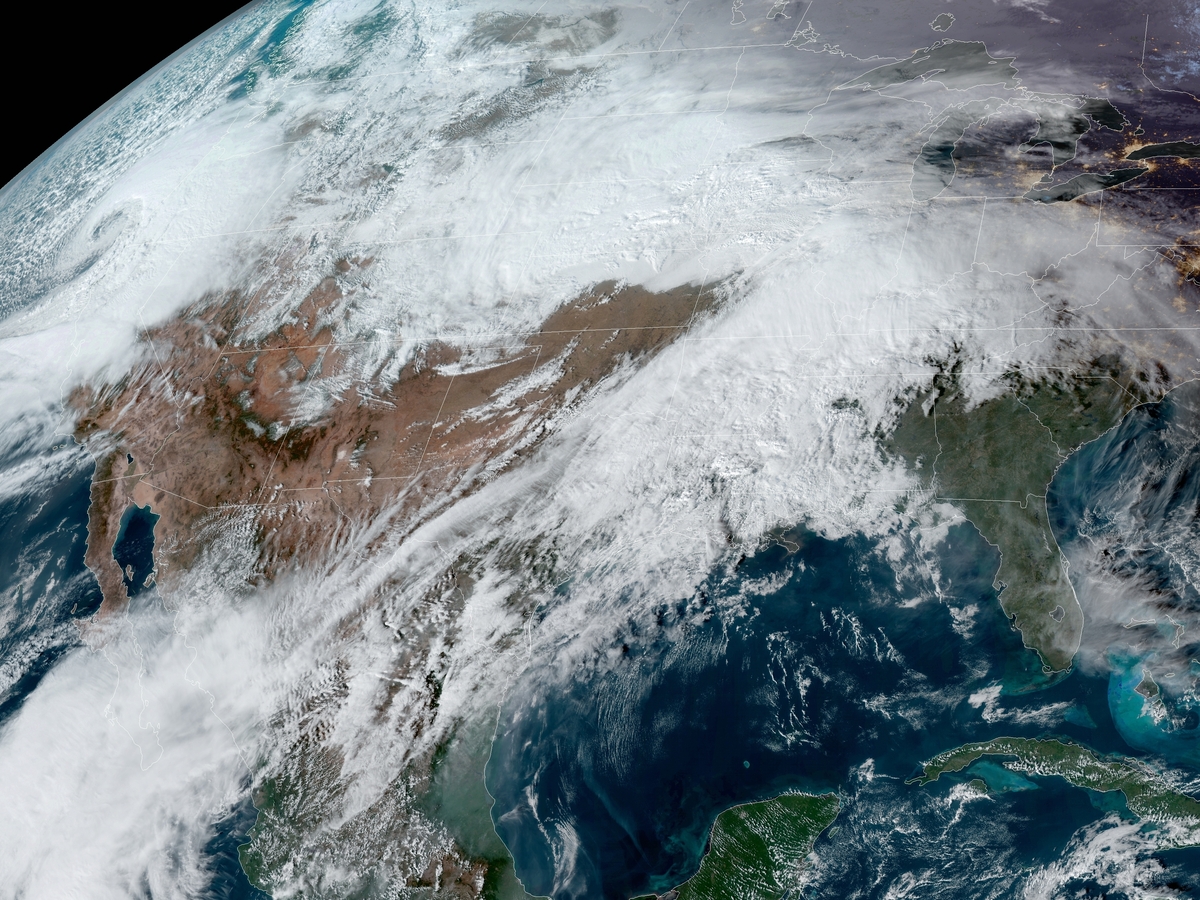 "Two back to back powerful storms will produce widespread heavy snow" in parts of the western and central U.S., the National Weather Service says.

Hurricane-force winds, blizzard conditions, heavy snowfall — and a "bomb cyclone" on the West Coast: Those are the dire predictions of weather forecasters, who are warning Thanksgiving travelers to be cautious and prepare for delays as two powerful back-to-back storms hit the western and central U.S. this week.

The warnings come as Denver and other cities are already coping with heavy snowfall from a winter storm that is hitting the southern and central Plains region. The NWS office in Cheyenne, Wyo., reported getting more than 12 inches of snow by midday on Tuesday. But elevated areas west of Fort Collins, Colo., reported more than 30 inches.

That storm is still developing and is expected to dump up to a foot of snow in a broad region by Thursday as it moves from the Plains to the upper Mississippi Valley, across the upper Great Lakes and into northern Maine, the NWS says. It adds that heavy snow could affect travelers at airports from Denver to Minneapolis-St. Paul.

Despite those high snow totals, the strongest winter storm is in the far West, where the system is coming in from the Pacific Ocean. It will start to hit Oregon and Northern California by Tuesday night, the NWS says. It adds that what could be a record-setting storm system will likely turn into a bomb cyclone — meaning the storm will intensify at an unusually rapid rate.

Here's a satellite look at the "bomb cyclone" that will be moving into the area over the next few hours. Hopefully everyone is prepared for strong, significant storm today! #orwx #cawx pic.twitter.com/hJwblDOEgO

"This low pressure system will likely undergo bombogenesis (pressure drop of at least 24mb in 24 hours) by late Tuesday afternoon," the NWS says, "at which point it will likely become a sub-980 mb low with hurricane force winds over the offshore waters!"

Blizzard conditions are expected in the mountains of southern Oregon and Northern California, with high waves and strong winds battering coastal areas as the storm comes in from the Pacific Ocean.

"Wind gusts are forecast to exceed 70 mph" near the coast of Oregon and Northern California, the NWS Weather Prediction Center says. By late Thursday, the Sierra Nevada range will likely see from 2 to 4 feet of snow.

"Portland's branch of the National Weather Service is recommending drivers take chains if they're moving through areas that might see snow," Oregon Public Broadcasting reports.

At lower elevations, strong winds and heavy rain could affect travelers at airports from San Francisco to Los Angeles and from Las Vegas to Phoenix over the next few days.

"Be where you need to be by 8-10 a.m. Tuesday morning, or wait until Wednesday afternoon" to travel, the NWS office in Medford, Ore., warns. But the office also adds that even after the worst of the storm passes, perilous conditions such as black ice could pose a threat through the end of the week.

As the storm moves inland from the West Coast, it could also bring "a flash flood threat across coastal Southern California from San Diego to Los Angeles," the NWS says, adding that the threat is especially acute in areas that have recently suffered wildfires.

In contrast to those imposing circumstances, the weather on most of the East Coast should be relatively quiet, the NWS says. But it also warns that strong winds will start to lash parts of the Northeast after the main storm moves off the coast of New England. Identifying a possible threat to the famous Thanksgiving Day parade in New York City, the NWS warns, "Wind gusts to 40+ mph are possible across New York City on Thursday."