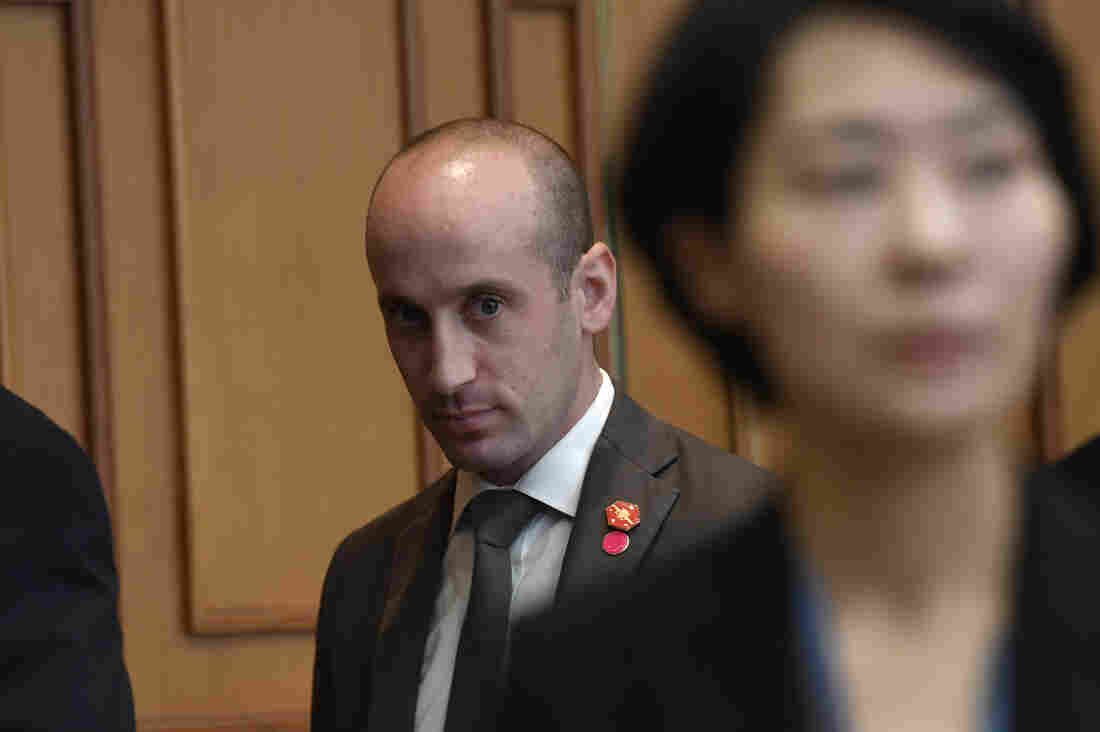 White House adviser Stephen Miller faces growing calls to resign after leaked emails show he promoted the ideas of white nationalists. Above, Miller waits for the start of a meeting with President Trump and South Korean President Moon Jae-in at the Blue House in Seoul in June. Susan Walsh/AP hide caption 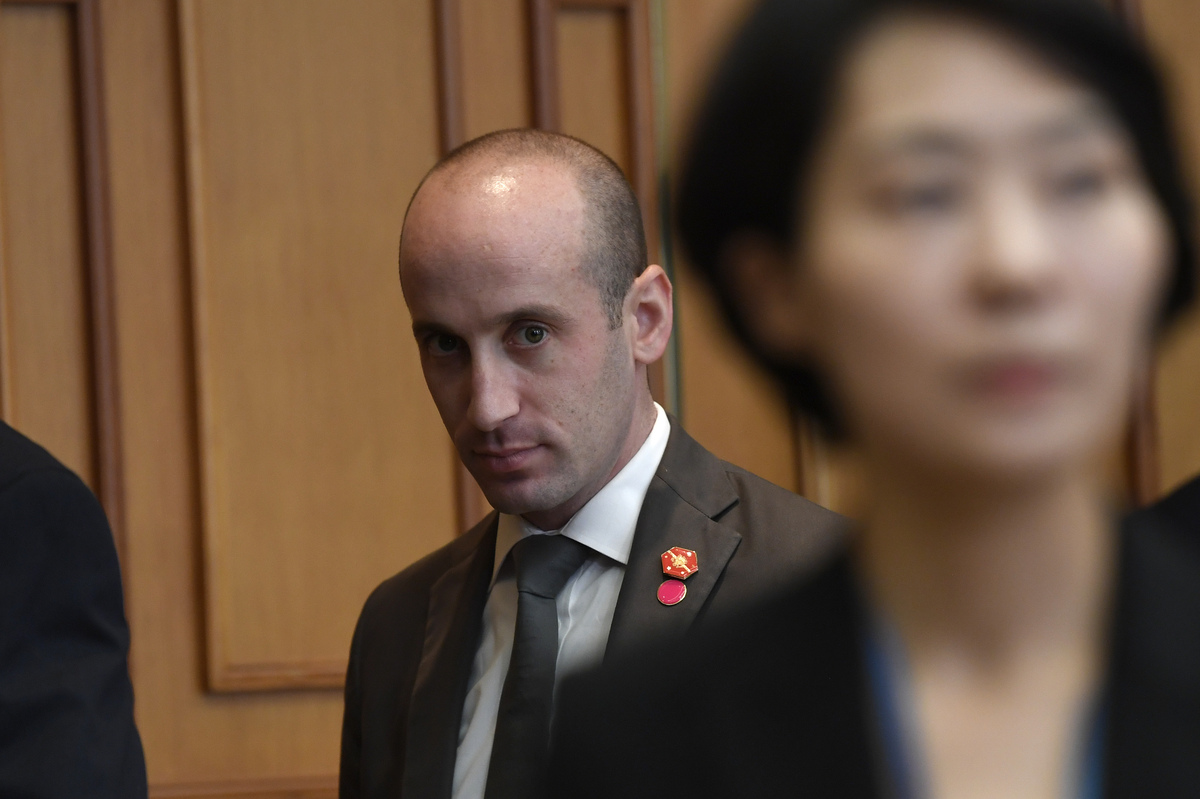 White House adviser Stephen Miller faces growing calls to resign after leaked emails show he promoted the ideas of white nationalists. Above, Miller waits for the start of a meeting with President Trump and South Korean President Moon Jae-in at the Blue House in Seoul in June.

For almost three decades, Jared Taylor has been publishing his ideas about race at the American Renaissance magazine and now at a website called AmRen, which is considered a mouthpiece for white supremacist ideology.

"The races are not identical and equivalent," says Taylor, who calls himself a "race realist" and rejects the white supremacist label. "There are patterns of difference. But this is now something that's considered a huge, hateful taboo in the United States."

The website is not well-known outside white nationalist circles — but it found an audience in White House adviser Stephen Miller.

Miller has recommended articles on AmRen and another white nationalist site called VDARE. We know this because the Southern Poverty Law Center has uncovered hundreds of emails that Miller wrote to a reporter at Breitbart News before he worked in the White House.

Civil rights activists and more than 100 members of Congress — all Democrats — have called for Miller's resignation since the publication of the emails. But the White House is standing behind him. And Republicans have been largely silent. Critics say that this suggests the line of what's acceptable in public discourse has shifted.

The latest batch of emails, released by the SPLC on Monday, shows Miller pushing a supposed link between immigrants and rising crime, an idea that has been debunked. Miller also flagged a story on AmRen written by Taylor, according to the Breitbart reporter, Katie McHugh.

Taylor frequently promotes ideas that are widely considered racist and cloaks them in the language of science. For example, he talks about black people having higher levels of testosterone and therefore being predisposed to commit more violent crimes — an idea that simply has no scientific support. In another email to McHugh, Miller suggested that she write about The Camp of the Saints, a French novel from the 1970s that depicts the destruction of Western civilization by immigrants. It has become a key inspiration in white nationalist circles.

To Miller's critics, the leaked emails — and the muted reaction on the right — suggest that the political dynamic around race and immigration has shifted to include ideas that were once beyond the pale.

"I fear that the line of what is normal is moving," said Vanita Gupta, the head of the Leadership Conference on Civil and Human Rights in Washington. The group sent a letter last week signed by 50 civil rights organizations, calling on the White House to fire Miller.

"I don't think that there's any way to look at those emails and to look at his own track record and not be profoundly disturbed about what we are allowing at the highest level of government today," Gutpa said.

In a White House where turnover is high, Miller is one of the staffers who have been there from the beginning. And he continues to be a key architect of the president's hard-line immigration policies.

The White House is defending him, saying Miller is opposed to bigotry in all its forms. But most Republicans have been silent.

"Yeah, it's horrible," said Mike Murphy, a Republican strategist who has worked on presidential campaigns for Mitt Romney and John McCain and describes himself as a "never Trumper."

"The Republican Party has been hijacked by Trump into this crude nativist populism and dregs like Miller running wild in positions of power," Murphy said.

Not that long ago, promoting the views of white nationalists would have hurt your career in Washington.

Earlier this year, Rep. Steve King, R-Iowa, said in an interview that he wondered why the terms "white nationalist" and "white supremacist" are considered offensive. King was quickly stripped of his committee assignments and rebuked by his colleagues on both sides of the aisle.

And last year, the Trump administration dismissed two low-level staffers for attending or speaking at public events with white nationalists.

But Miller is still there.

"The Republican leaders of one half-generation ago would have taken a very strong public line against this sort of stuff," Murphy said. "George H.W. Bush, George Bush, Ronald Reagan never would have tolerated any of this."

Murphy thinks the silence among current Republicans is the sound of fear. He says they don't want to anger President Trump and his loyal base of Republican primary voters. Murphy does not think there's wide support in the GOP for white nationalist ideas.

But Maya Berry, executive director of the Arab American Institute in Washington, is not so sure. She says many Republicans are worried about the coming demographic shift in the United States. According to the Census Bureau, a majority of the U.S. will be made up of minority populations by 2045.

"That's actually the real story of the Stephen Miller problem," Berry said. "It's not that he's an anomaly. It's that at this time, regrettably, there seems to be a fairly dominant strain of the Republican Party that thinks it is appropriate to be afraid of the upcoming majority-minority change."

People who study far-right extremism say this is how ideas move from the fringe to the mainstream, and they warn that these ideas have been driving extremist violence in places such as Charlottesville, Va.; Pittsburgh; El Paso, Texas; and elsewhere.

Cynthia Miller-Idriss of American University studies white nationalism and extremism. She says the normalization of hate speech may be well underway.

"There is a danger here that people start to get a little bit cynical," Miller-Idriss said. "They downplay it, or they think like, 'Oh, it's not so bad.' But, you know, something that would have been shocking two or three or four or five years ago becomes much less shocking in 2019."

To Jared Taylor, this is progress.

The editor of AmRen says there's nothing "newsworthy" in Miller's emails or about the fact that he would seek out information that's not available from the mainstream media. And Taylor says he's gratified that his ideas are finally gaining some traction.

"I've been injecting my ideas into the general conversation patiently and diligently for the last 30 years," Taylor says. "And I can assure you that more and more people agree with me."