Accessibility links
Review: 'Knives Out' Is A Sparkling Family Mystery, Plus Chris Evans' Sweaters Writer-director Rian Johnson has a triumph with Knives Out, a murder mystery featuring a sprawling cast having a brilliant and beautifully designed good time. 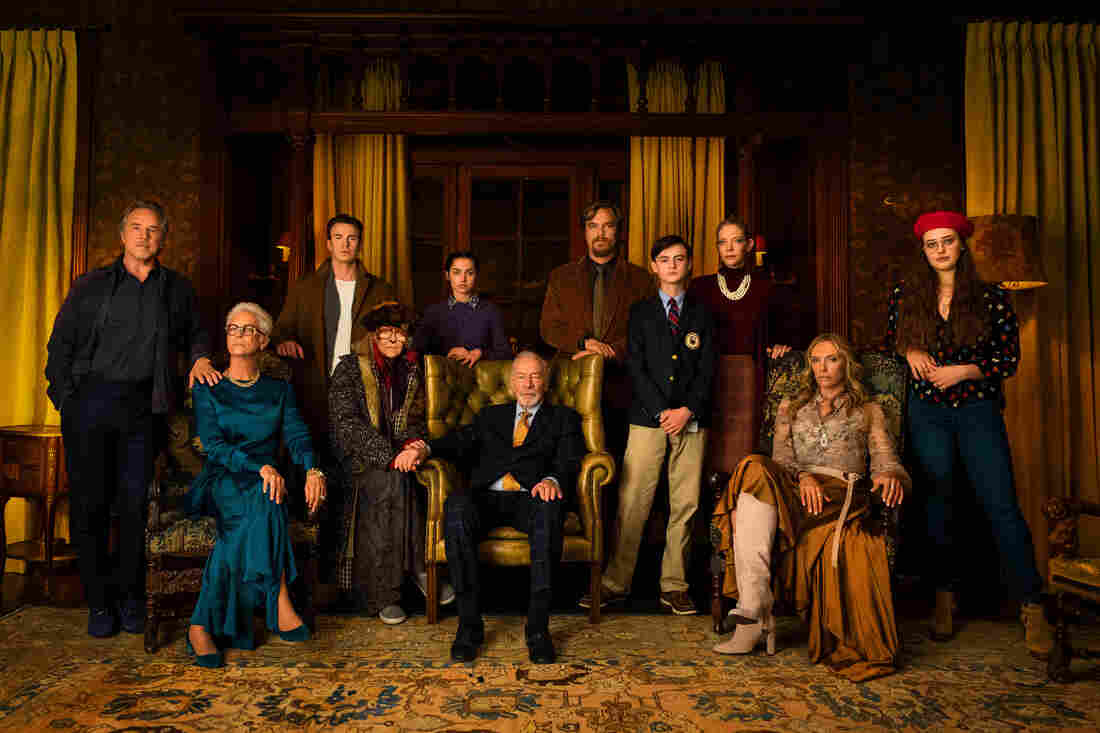 Knives Out, written and directed by Rian Johnson, brings together an all-star cast for a festive and fun family fatality. Claire Folger/Lionsgate hide caption 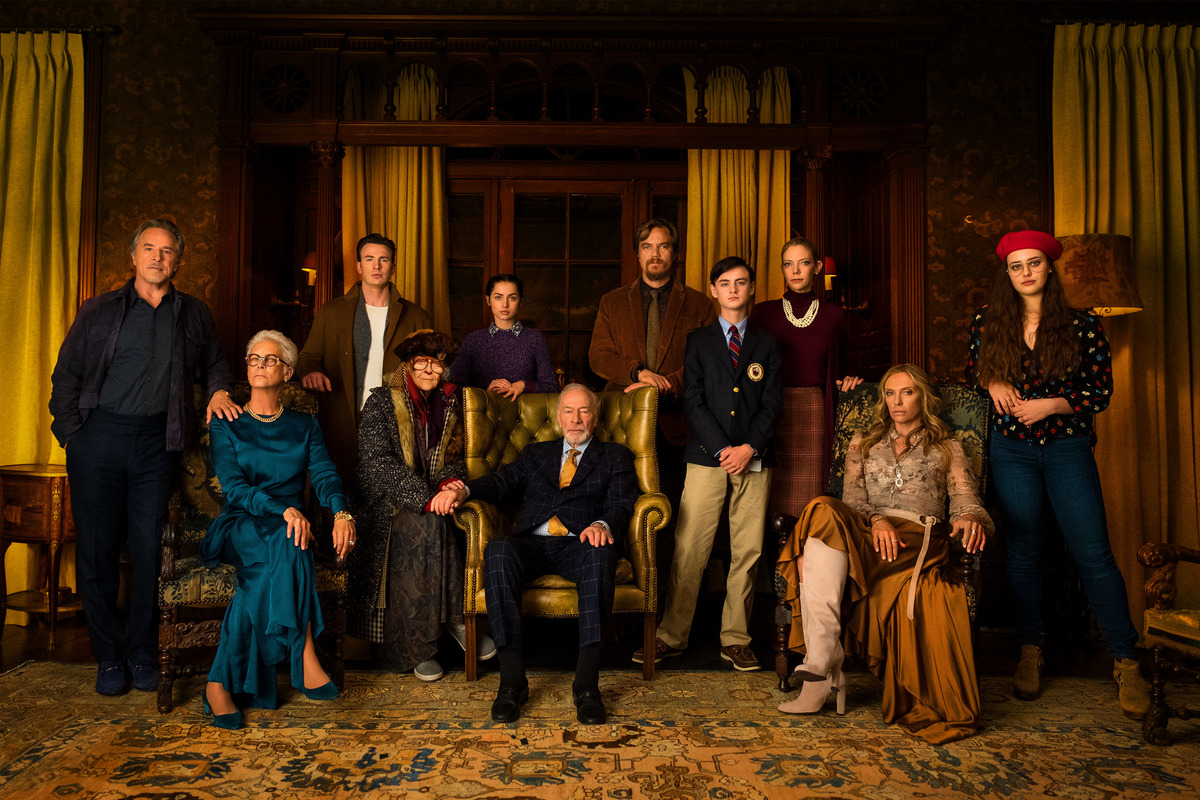 Knives Out, written and directed by Rian Johnson, brings together an all-star cast for a festive and fun family fatality.

Certain fictional mansions exist only so their owners can mysteriously die in them. The gothic revival abode of famous novelist Harlan Thrombey (Christopher Plummer) in Rian Johnson's Knives Out is one of them. All brick turrets and spindly spires on the outside, all dark wood and winding staircases on the inside, it's a perfect place to throw a party — especially one in which all the suspects in a death are gathered at the request of law enforcement.

A police detective (LaKeith Stanfield) and his helpful right hand (Noah Segan) have gathered everyone for interviews — and accompanying them is Benoit Blanc (Daniel Craig), a southern detective so thickly accented that he's compared to Colonel Sanders. Why Blanc is there at all is one of many things I would not dare reveal, as this film is not a trick or a postmodern deconstruction of a genre, but is instead an actual old-fashioned whodunit that will eventually tell you whodunit and why, precisely as it should. 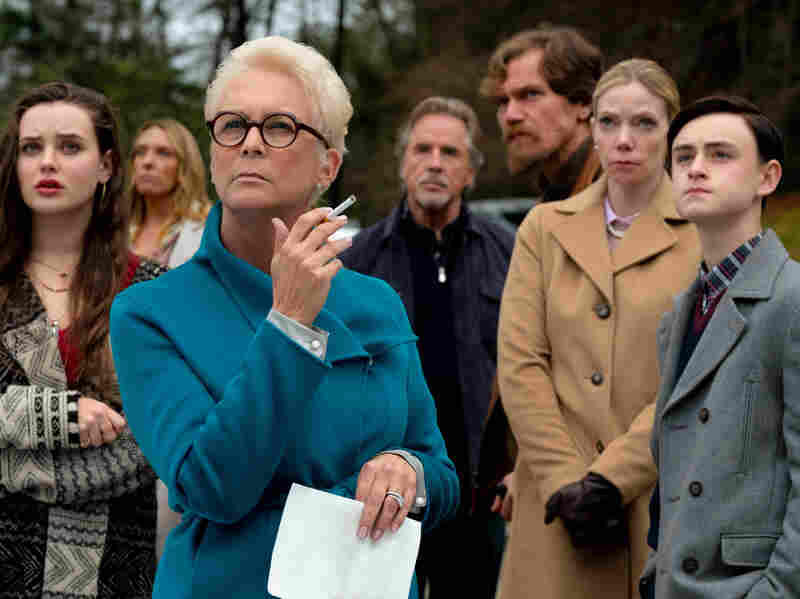 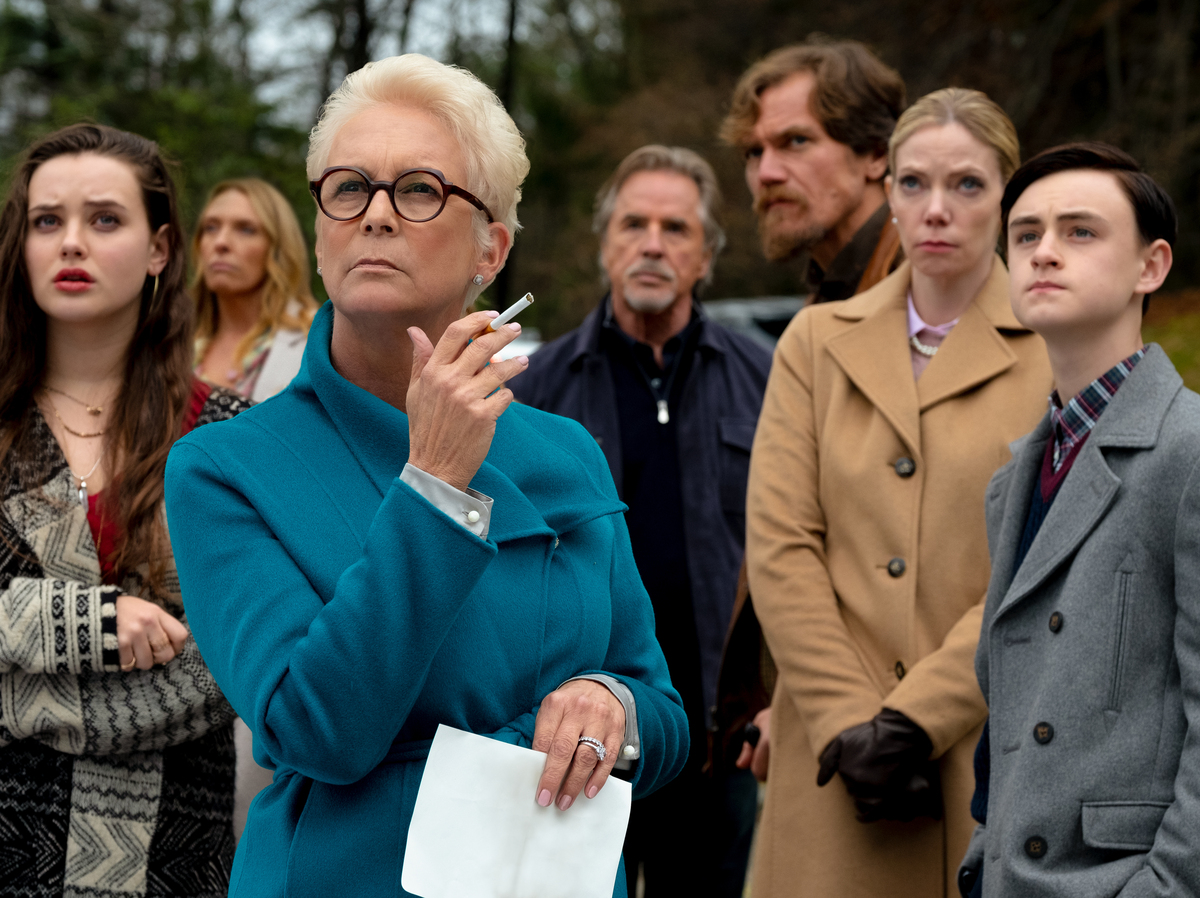 If it sounds like a very big cast full of potentially very big performances, please know it is one. With the exception of de Armas and perhaps Evans, everyone in the film is working in marvelous broad strokes, drawing these characters as types but not retreads. From Collette's goofy lifestyle influencer to Shannon's stone-faced and resentment-driven grump, they're all perfectly cast. And that's before you get to Jamie Lee Curtis, resplendent in Linda's luscious, vibrant, real-estate-peddling pantsuits, with round glasses and a cap of perfectly kept, snow-white hair. The work of assembling this group is a credit to casting director Mary Vernieu, and a reminder of what an art it is to find the right people for the right parts.

Knives Out is also one of the best-dressed movies you'll see this year, both in terms of actual wardrobe from costume designer Jenny Eagan and from production designer David Crank. This is a very rich family that, as some rich families do, often looks both indulgent and stupefyingly tacky. Their family home is similarly luxurious and weird at the same time, its elaborate rugs and ornate everything speaking to both the family's excesses and its overly complicated existence.

The same goes for the things they are given to say. Johnson's dialogue is sharp and filled with quotable lines no fair review would quote, and sometimes, just as the story gets very big and broad, a joke will go by very quietly, almost under the breath. Everyone in this cast can nail a line reading to the wall, including a couple of folks — Don Johnson for one, Daniel Craig for another — who have maybe never been given such a good workout for their comic chops. 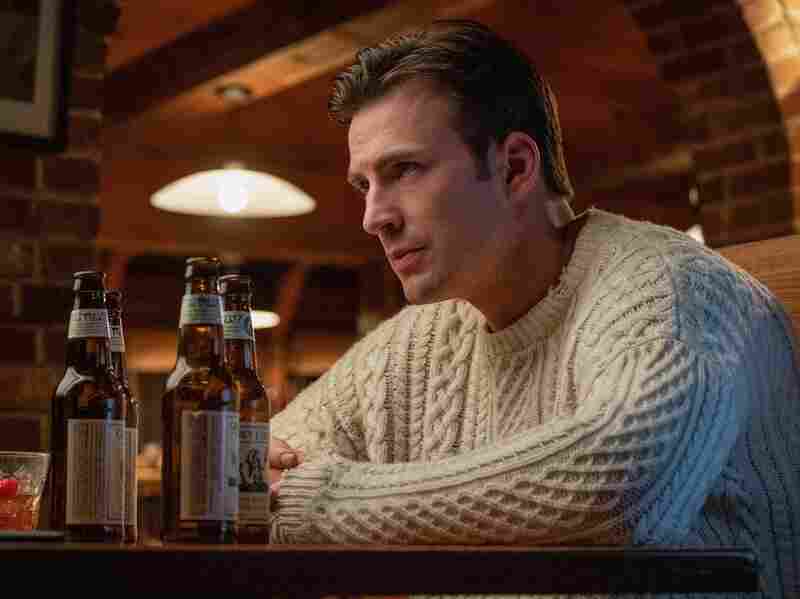 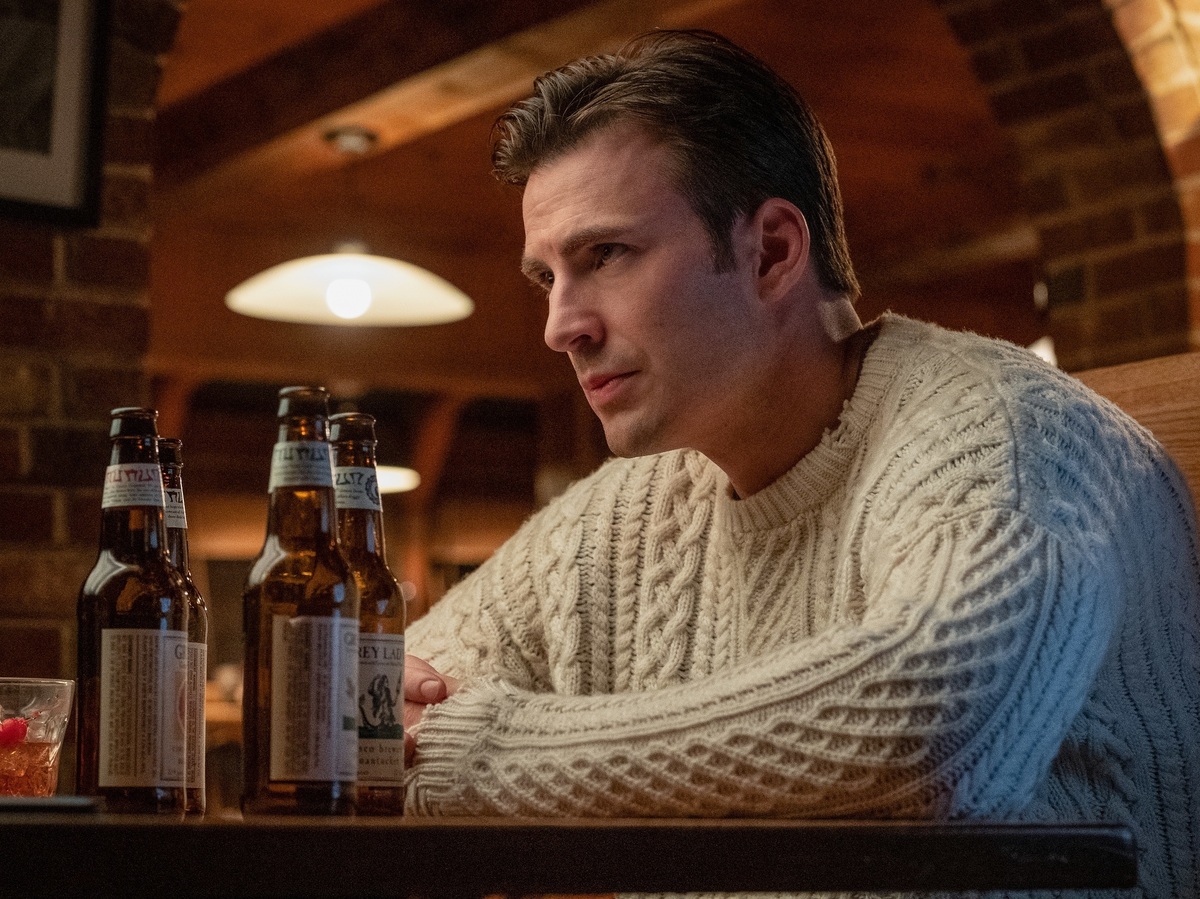 Move over, Captain America: Chris Evans in this cable-knit sweater may be Peak Chris Evans.

That goes for Chris Evans as well, even though he's spent the past several years in some of the most popular movies of all time. He was allowed to be funny in a wholesome sort of way in his Captain America days, but it's a special treat to see him tear right into this rich-brat bit, both preternaturally handsome and cheerfully obnoxious, a one-man cable-knit charm offensive, emphasis very often on "offensive."

What Rian Johnson has done here is a masterful feat of balance, staying within the rules of the creaky-old-house genre but making just enough adjustments to stay clear of story trouble. Because story trouble isn't uncommon in a film like this: There's only so long it's fun to watch people accuse each other while clues accumulate and red herrings fly by before you start to want something to happen, something to be revealed. In Knives Out, there's not just one information dump; there are several. The twists are plentiful enough that even if some ungenerous person tried to spoil the film for you, they couldn't really; you'd still be missing chapters upon chapters of necessary information.

If it seems to you that this film has much in common with Clue, Johnson knows it. You feel echoes of Murder, She Wrote? He knows. You think Craig sounds like Foghorn Leghorn? Yup, Johnson knows that too. (Although Craig says he based the voice on historian Shelby Foote.) Self-aware but not self-conscious, Knives Out acknowledges its debts to the trappings of mystery and frolics in them like a field of clover.

At the same time, touches of a contemporary consciousness drive the story. Marta is "the help" to many of the Thrombeys, and the family treats her with a sharply observed combination of affection, condescension and dismissal, provided she stays in what they consider her place. Given how big the other performances are, de Armas and her work here, which has both comedy and stillness, could have been swallowed up. But they aren't at all. She's often the most compelling person in the story, even as she's doing the least. (Not hard, when everyone else is, as they say, doing the most.)

It is always a delight to see someone joyfully, efficiently, and indelibly demolish any alleged hard barrier between art and entertainment. Knives Out is Rian Johnson's salute to mysteries, but it is also his latest demonstration of his uncommon mastery of the idea that you can — that you should — artfully entertain an audience with loving attention to detail; that it is just as high a purpose as to artfully devastate or confound them. It's one of the best movies of the year, and one of the most purely enjoyable, as well.