Accessibility links
Port Neches Explosion: Texas Chemical Plant Blast Injures 3 People The blast is the latest in a string of industrial incidents in east Texas. The explosion at the petrochemical plant injured three people and blew out windows and mangled doors of some nearby homes. 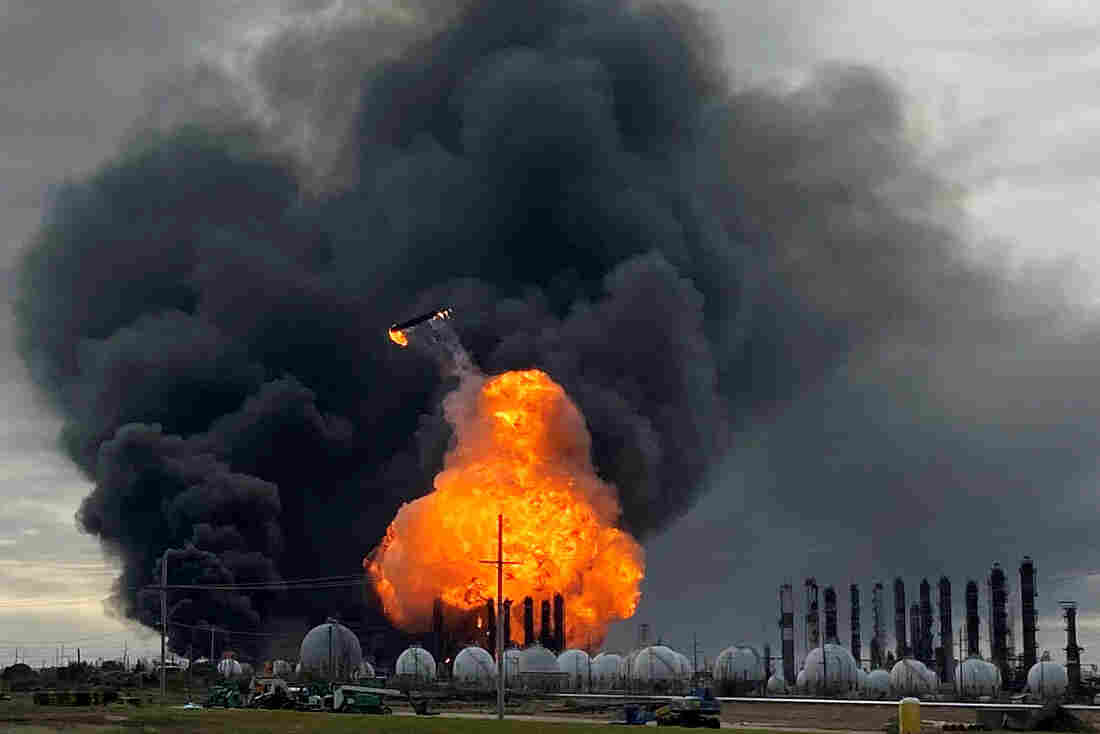 A process tower flies through air after exploding at the TPC Group Petrochemical Plant, after an earlier massive explosion sparked a blaze at the plant in Port Neches, Texas, on Wednesday. Erwin Seba/Reuters hide caption 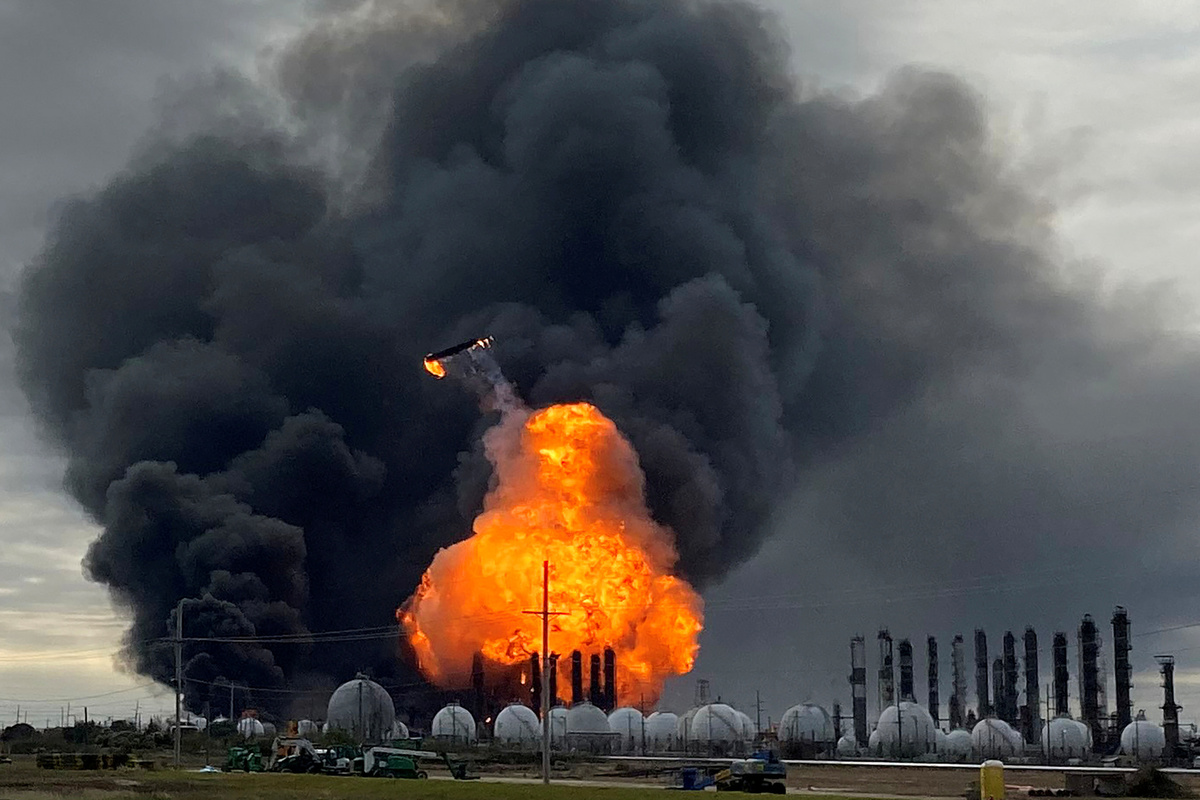 A process tower flies through air after exploding at the TPC Group Petrochemical Plant, after an earlier massive explosion sparked a blaze at the plant in Port Neches, Texas, on Wednesday.

A huge explosion early Wednesday has injured three people at a Texas chemical plant, and the strength of the blast shattered windows and damaged doors of nearby homes, startling sleeping residents.

After dark smoke billowed for hours from the plant after the 1 a.m. blast, another large explosion ripped through the plant in the early afternoon, sending up a huge ball of fire.

Residents within a half mile of the petrochemical plant were under a mandatory evacuation order Wednesday morning, and the Port Neches Fire Department encouraged everyone downwind of the smoke to shelter in place.

The Texas Commission on Environmental Quality said it was responding to the initial explosion and is conducting handheld air monitoring. It said in a statement that the explosion "is causing the release of chemicals called volatile organic compounds." In high concentrations, these can "cause eye, nose, and throat irritation, shortness of breath, headaches, and nausea."

Area residents were working to clean up the mess on Wednesday.

"We had some windows blow out and there are quite a few other places dealing with it, but not everyone," Avenue Coffee Cafe co-owner David Pool told the Houston Chronicle while cleaning up damage. "The tenant closest to the explosion is perfectly fine."

The explosion is the latest in a string of industrial incidents in the region. The Houston area saw three fires at chemical facilities in a month-long span in March and April — including an explosion at the KMCO plant in Crosby that killed a worker, as Houston Public Media's Florian Martin reported. In July, more than 30 people were treated for minor injuries after a fire at an Exxon Mobil refinery in Baytown.

"Within the last year, I have witnessed an unacceptable trend of significant incidents impacting the Gulf Coast region," Texas Commission on Environmental Quality Executive Director Toby Baker said in a statement. "While not all emergency events may be prevented, it is imperative that industry be accountable and held to the highest standard of compliance to ensure the safety of the state's citizens and the protection of the environment."

Environmental groups are also speaking out. "This should not be anyone's reality and unfortunately, it is for communities sitting at the fence-line of the petrochemical corridor along the Gulf Coast — an ever-growing corridor because of the billions of dollars being invested in petrochemical infrastructure related to plastic," Yvette Arellano from the Texas Environmental Justice Advocacy Service said in a statement.

The plant is owned by the Houston-headquartered petrochemical company TPC Group, which said at 10 a.m. local time that "emergency responders are still working to bring the event under control, and are doing so as quickly and safely as possible."

Those who were injured – two TPC employees and one contractor – were transported to a nearby hospital and to one in Houston, according to the company.

Images broadcast on KBMT show minor destruction to nearby homes caused by the blast, including ripped-off roofing shingles and mangled doors and windows. The local broadcaster showed footage captured by a doorbell camera, in which the dark sky is suddenly filled with bright white flames.

TPC has not said exactly what caused the massive explosion, saying only that it involved "a processing unit." It stressed that the company "sincerely remains focused on protecting the safety of responders and the public and minimizing any impact to the environment."

The state environmental agency said it has requested EPA support, and federal personnel were heading to the site.

On its website, the TPC Group describes itself as "a leading producer of value-added products derived from petrochemical raw materials."

The Port Neches location employs more than 175 full-time employees and 50 contractors, according to the website. It produces butadiene, which is used to make tires, and raffinate, a petroleum gas.

A search of Texas Commission on Environmental Quality records shows that this year, TPC Group has been ordered to pay more than $378,000 in fines over multiple environmental violations at two facilities, in Port Neches and in Houston.

The largest penalty — more than $214,000 — was levied in January over issues at the Houston plant. Investigators found that the site was emitting more volatile organic compounds than allowed by law from its wastewater aeration ponds, among other violations including emissions of nitrogen oxides and carbon monoxide. The environmental regulator said that since then, the company had taken some steps to remedy those issues.

The most significant penalty involving the Port Neches facility this year was $13,688, issued in February. An investigator found the company "failed to prevent unauthorized emissions" by releasing 108 pounds of butadiene gas in June 2017 and 54 pounds several months later. Both releases "could have been avoided thorough better operational and maintenance practices," the state environmental agency concluded. According to the agency's records, TPC "generally denies" the allegations.

A week ago, the Trump administration formally changed Obama-era safety rules regulating how companies store dangerous chemicals. "Under the Obama-era rules, businesses were required to notify nearby communities about certain chemicals, follow best practices and get a third-party audit if an accident happens," KUT's Mose Buchele reported for NPR.

"But the Trump administration says those rules are burdensome and raise security concerns."