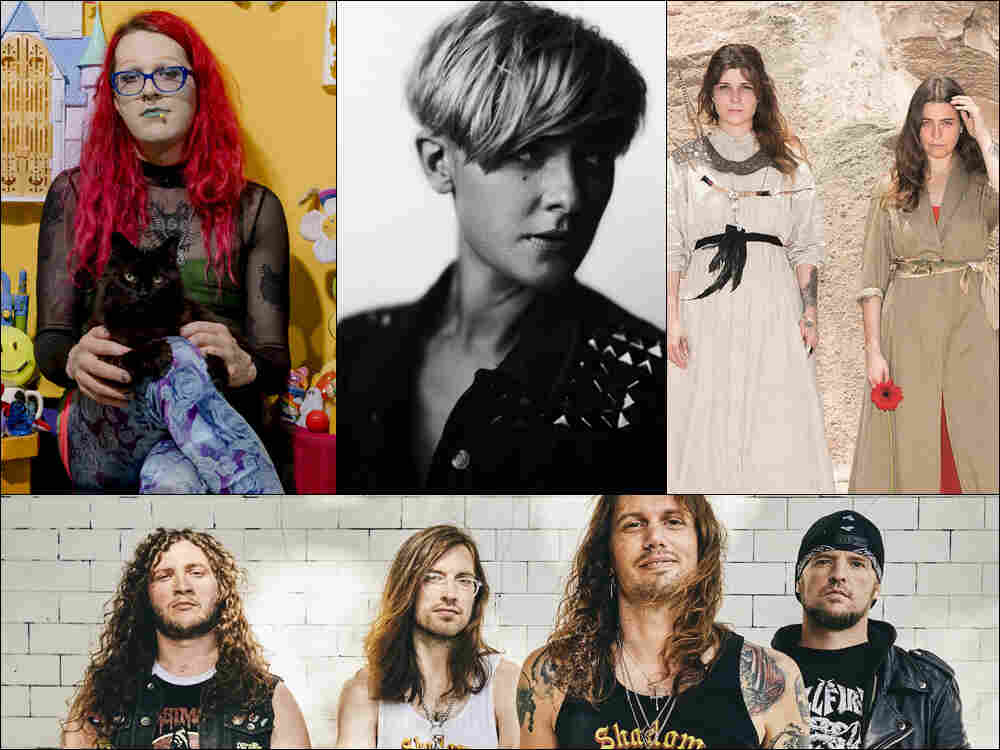 Viking's Choice went weekly this year, serving up punk, pop, metal, drone and outer sounds like a disastrously delicious all-you-can-eat buffet. There's a brand new streaming playlist every Tuesday, but the real diggers know that the uncut gems were to be found in the mines of Bandcamp — turntable noise, psychedelic cumbia and Auto-Tuned, countrified rock and roll minimalism (no, really). I love sharing this music, and it tickles me that All Songs Considered fans look forward to my annual year-end episode, in which I get to blast Bob Boilen out of the studio.

You'll find no rankings, and certainly nothing from NPR Music's top 25 albums of the year, or any of the other many thoughtful lists we published in December. Instead, there's psychedelic noise-rock from Brazil, icy minimalism from Sweden, bonkers punk from Boston and anthemic heavy metal from Fresno. Listen above, read below — and for more, you can follow my collection on Bandcamp and shuffle through a very long playlist of songs I loved this year.

You'd be forgiven for not keeping up with Damian Master's every single move. He runs Colloquial Sound Recordings and is involved with a dozen metal, ambient or hardcore-punk bands. But his premier project is A Pregnant Light, where Master's endless creativity and shameless bravado coalesce into a rugged beauty. On Broken Play, in particular, metallic post-punk hooks batter Slayer- and Celtic Frost-worshipping riffs and Codeine comedowns with songs about romance, faith and optimism in the face of trials and tribulations.

When I try to describe the simultaneously fantastical and obliterating sounds of Fire-Toolz to folks, I usually throw my hands up — not out of frustration, but from awe. Angel Marcloid has clashed New Age synthscapes, clubby raves, jazz fusion and metal shrieks for a few years now, but Field Whispers (Into the Crystal Palace) goes beyond the mash-up, into an idiosyncratic master's pure creation.

Maria W Horn plays with the space between artificiality and reality on her second album in as many years. Epistasis features pieces for string quartet and organ, bookended by two minimalist works for Disklavier. Quiet, yet forceful acoustic elements are wrapped in the sinews of technology to blur composition, especially on the riveting, mournful and menacing title track, which was inspired by the Swedish composer's love of early '90s black and doom metal.

The N**** in Me Is Me sounds like what a mosh pit feels like — deranged, unpredictable and sure to leave a nasty bruise. In 18 minutes of furious hardcore, rap and noise that just don't let up, Philly's Soul Glo distills the rage and terror of living in America while being black with blunt force: "No more selling off our trauma just to eat trash / Or letting you deny the past to swerve the backlash."

The Brazilian post-punks scaled down to a duo, but opened a festering third eye. The psychedelic noise receptors of a previous decade (think Raccoo-oo-oon and Gowns) run throughout Rakta's Falha Comum, but in levels below, the sinister grooves and cackled reverb inhabit a life all their own with primal incantations to spirits unknown.

Mára, Here Behold Your Own

Few records resonated with me more this year than Faith Coloccia's quiet, droning hymns to her then-unborn son. They are snapshots of a time before parenthood rendered in garbled organ, ambient guitar loops and echoing lullabies — a literal record of memory before a world shifts to new life.

Warm, fuzzy world-building from blocks of sound stretched and warped into a new nostalgia. Matthew Sage, who just closed shop on the adventurous label Patient Sounds after 10 years, pieces together real-life saxophone, woodwind and strings with clouds of electronic fluff and fizz for a dense, deep listen.

Just bonkers. Boston's Rong channels the joyous chaos of Japanese punks Melt-Banana and the aggro skronk of Brainiac with a tad of Deerhoof's weirdo-pop hooks, in what sounds like a swarm of bats fighting a comically large industrial fan... and the bats win. Dissect the noise and you'll find some truly athletic guitar interplay, held together by a sturdy rhythm section and Olivia W-B's vocal acrobatics.

Haunt, If Icarus Could Fly

If a few six-packs of regular beer and a stereo blasting Judas Priest and Iron Maiden is your idea of a perfect Friday night, Haunt can bring the chips. Between Beastmaker, Hysteria and Haunt, guitarist and vocalist Trevor Willam Church is stupidly prolific, which every metal writer is contractually obligated to acknowledge. More than ever, If Icarus Could Fly synthesizes an earnest, studied love for '80s heavy metal, particularly Randy Rhodes-era Ozzy and some Thin Lizzy for good measure, with tons of guitar harmonies and can-crushing anthems, yes, but also a ton of heart.