Accessibility links
Fisheries And Fishermen Hard Hit By Decline Of Oysters On Gulf Coast Record flooding on the Mississippi River sent too much fresh water into the Gulf of Mexico, killing oysters and crippling other seafood harvests that depend on saltwater to survive. 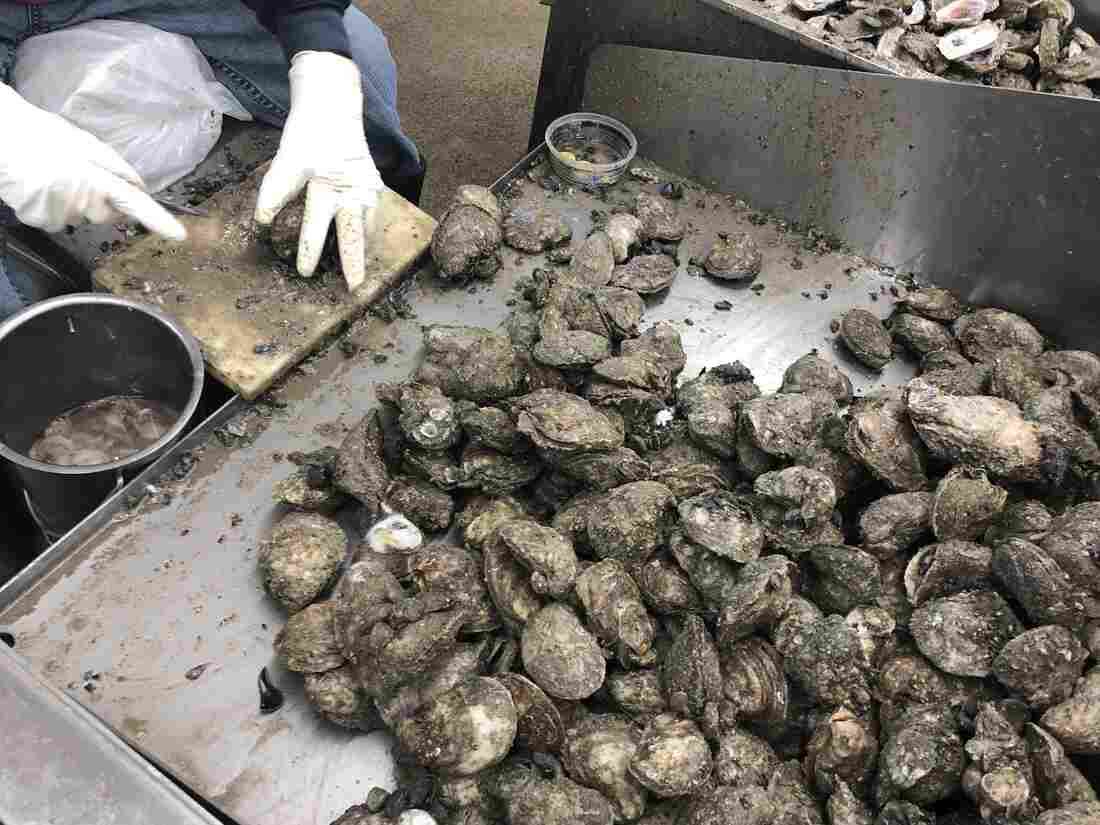 The shucking house at Bon Secour Fisheries in Alabama has just three shuckers working this year because of a lack of oysters. Debbie Elliott/NPR hide caption 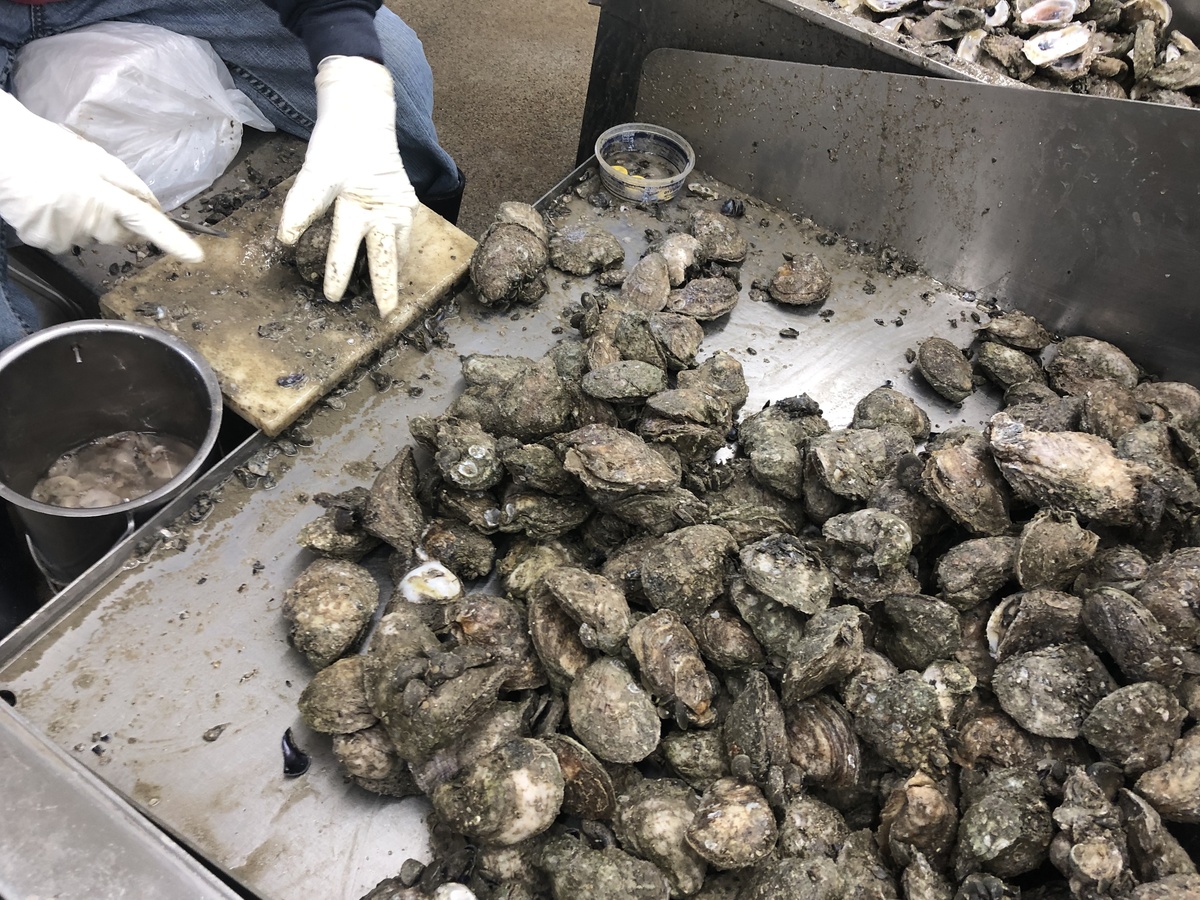 The shucking house at Bon Secour Fisheries in Alabama has just three shuckers working this year because of a lack of oysters.

Typically, the week before Thanksgiving would mean a busy oyster shucking floor at Bon Secour Fisheries on the Alabama gulf coast. But this year just three shuckers are working to fill gallon tubs with oyster meat. There should be 20 more.

"When there's no oysters to shuck, they don't have any work," says Chris Nelson, vice president of Bon Secour Fisheries, a family-run seafood company that dates to 1892.

Record flooding on the Mississippi River sent too much fresh water into the Gulf of Mexico, killing oysters and crippling other seafood harvests that depend on saltwater to survive.

A gulf coast favorite for Thanksgiving is oyster dressing, but it might not show up at many tables today. Gulf oysters are hard to get, and what are available come at a premium price. Nelson says it's the Gulf oyster industry's toughest crisis in the 30 years he's been working.

"This is the worst it's ever been," Nelson says. "It's worse than the oil spill, worse than Katrina, worse than after Ivan by far."

Nelson says those hurricanes and other disasters have left the industry more brittle, unable to weather the impact of the freshwater inundation that killed off some of the Gulf of Mexico's most productive oyster areas, including industry leader Louisiana.

The water came from a massive release of Mississippi River floodwaters through the Bonnet Carré Spillway. It's a floodgate north of New Orleans that diverts river water into Lake Pontchartrain, to protect communities downriver.

Because of record floods on the Mississippi, the U.S. Army Corps of Engineers had to open the spillway for longer than ever before — a total of 123 days during two separate openings. The first was Feb. 27 to April 11, and then again May 10 to July 27.

It was unprecedented, says Read Hendon with the University of Southern Mississippi's Gulf Coast Research Laboratory.

He says that meant more than a trillion cubic feet of freshwater coming through Lake Pontchartrain and into the Mississippi Sound, the area of the northern Gulf of Mexico between the central gulf coast and barrier islands offshore. It's part of what's known as the fertile fisheries crescent. And those fisheries need salty water to thrive. 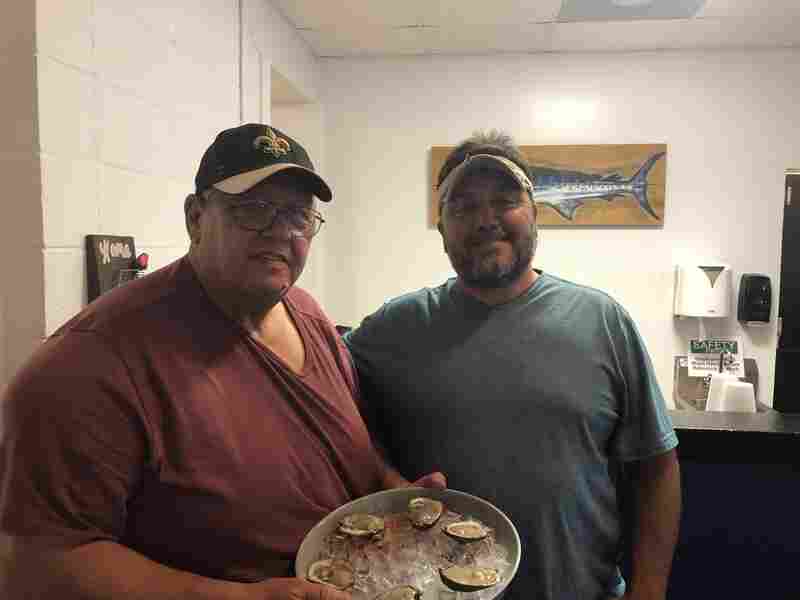 Clifford Lancon and his son Jason serve up a half-dozen on the half shell, but these came from Texas and cost 60 cents an oyster. With the Louisiana and Mississippi harvest devastated, local restaurants are turning to Texas to get their oysters and paying a premium. Debbie Elliott/NPR hide caption 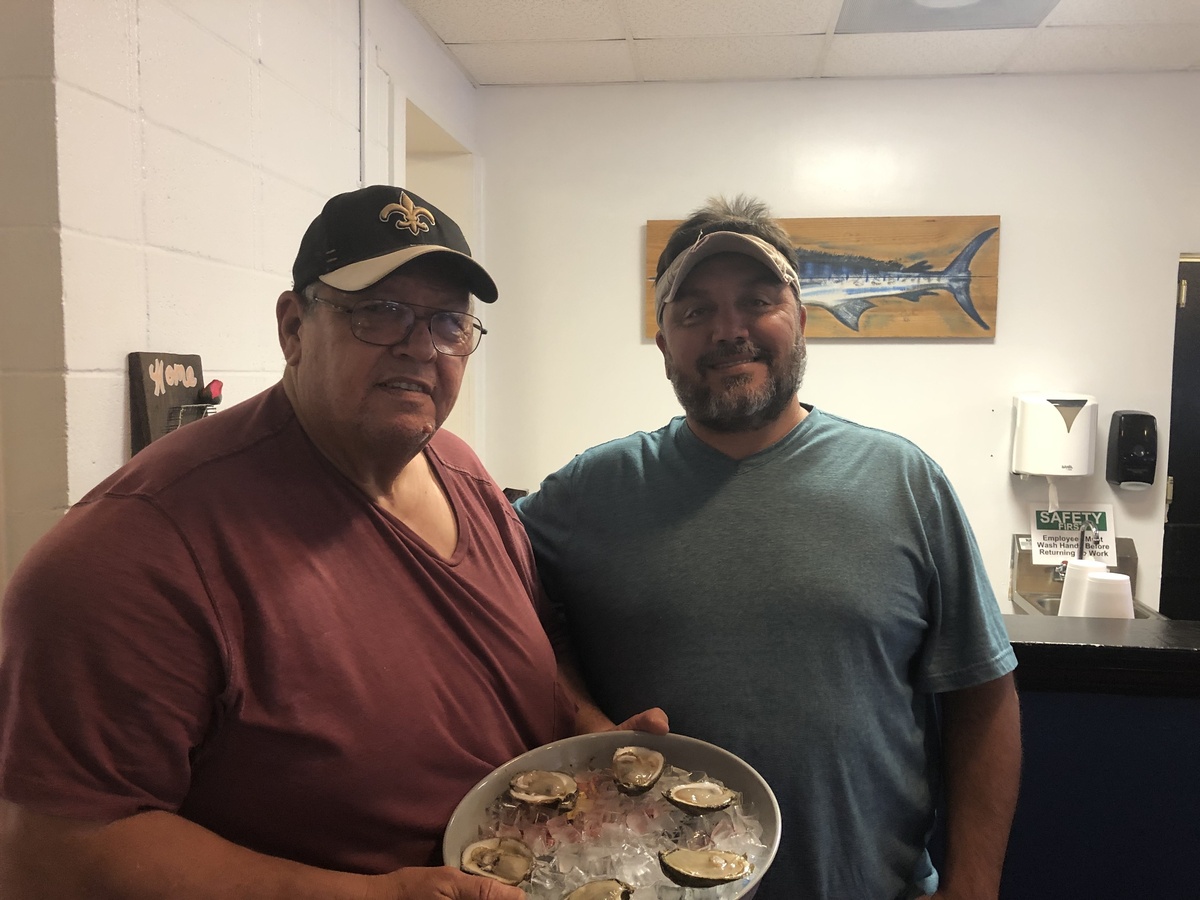 Clifford Lancon and his son Jason serve up a half-dozen on the half shell, but these came from Texas and cost 60 cents an oyster. With the Louisiana and Mississippi harvest devastated, local restaurants are turning to Texas to get their oysters and paying a premium.

Hendon says blue crab landings are down, the shrimp harvest was curtailed, and oysters were all but wiped out, with a more than 90% mortality rate.

"We won't even have a commercial oyster season this year," Hendon says. "There's just nothing out there for the guys to go harvest."

That has local restaurants turning to Texas for gulf oysters, when they can get them.

At CJ's Coastal Grill in Biloxi, Miss., Clifford Lancon instinctively jabs his oyster knife in the sweet spot where the oyster shell will pop open.

"I've been doing it a long, long time," he says. "Actually started when I was 10 at my grandfather's shop."

CJ's only has two boxes of oysters, a fraction of what he would typically serve.

"This is November. We're supposed to be wall to wall with oysters, getting ready for Thanksgiving and Christmas," says Lancon. "And there are no oysters to be had."

And what oysters are available are running about 60 cents an oyster, he says, higher than most customers are willing to pay.

Lancon is 63 and is an oysterman himself, coming from a long line of seafood harvesters. For the first time this year he was trying off bottom oyster farming – in cages a half-mile offshore. But the fresh water killed his crop – about 400,000 oysters. He's trying to start over, and put out 100,000 baby oysters last week. It's risky.

"We hope that the Army Corps of Engineers can figure a way to divert the water a different way so we don't lose our oysters every few years," says Lancon. "Hopefully doesn't happen every year for sure. You know, with global warming, who knows?"

Lancon says with more rainfall likely in the Mississippi drainage basin, it's time to share the burden.

"I'm not saying that it wasn't called for to open the spillway, but there has to be other ways," he says. "We don't want a single life to be lost in New Orleans because of flooding, but we also don't want to lose our livelihood." 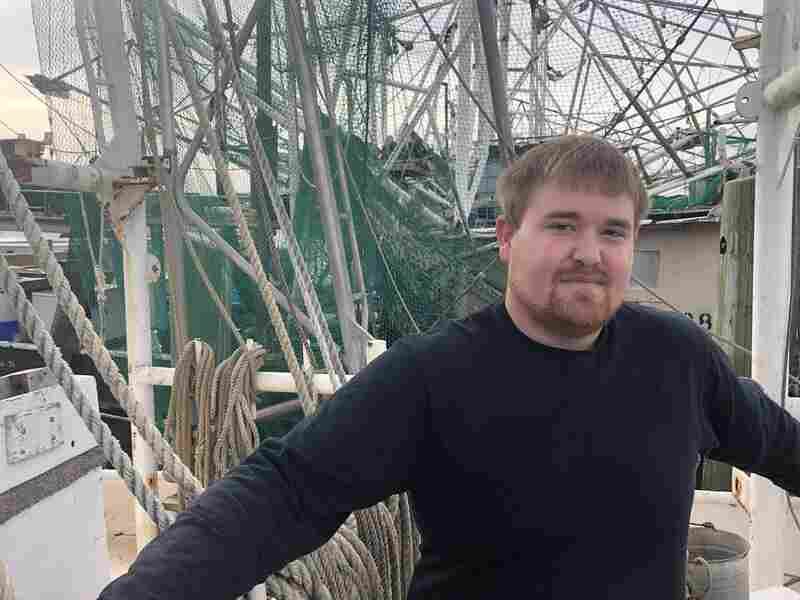 Twenty-nine-year-old Christopher Rhodes is a third-generation fisherman but doesn't think he can stay in the business. Debbie Elliott/NPR hide caption 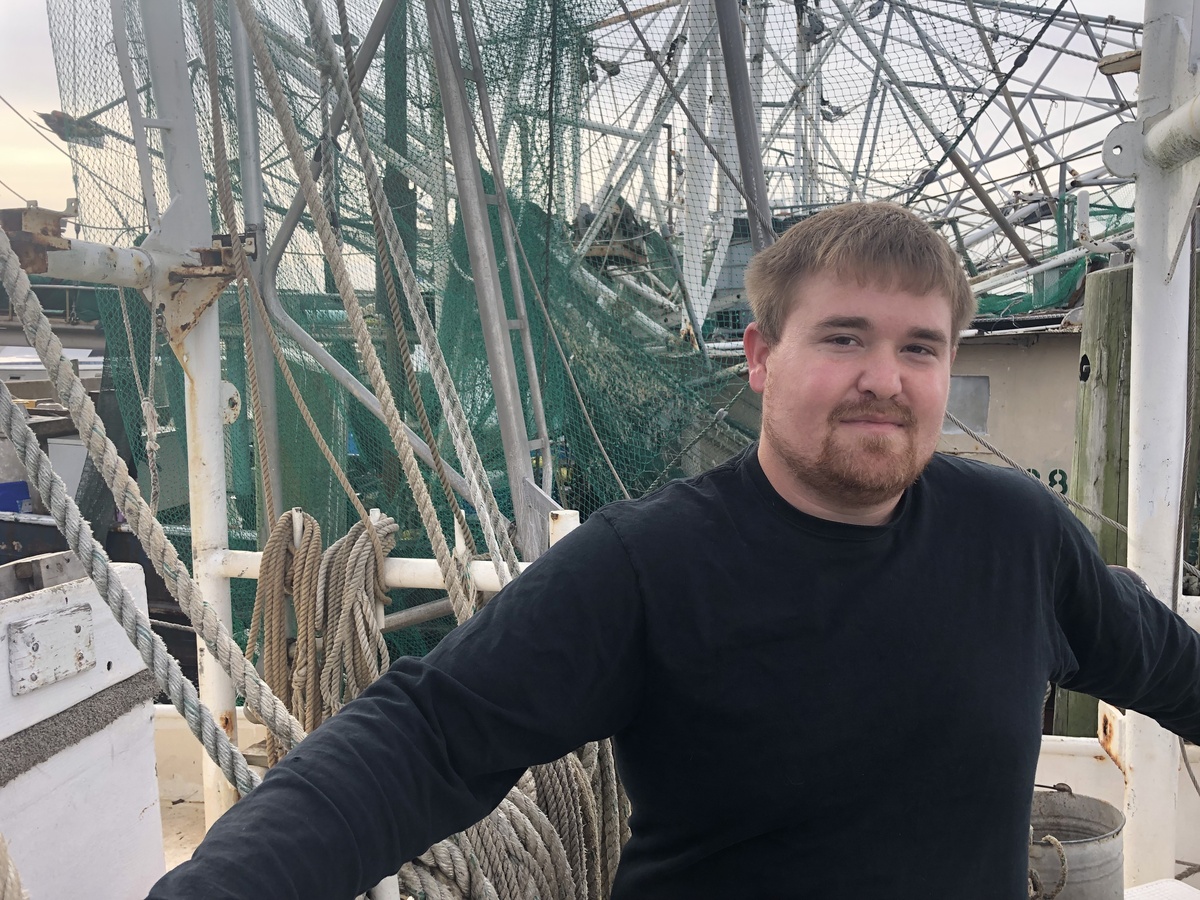 Twenty-nine-year-old Christopher Rhodes is a third-generation fisherman but doesn't think he can stay in the business.

The floodwaters affected more than just Mississippi fisheries. Hundreds of dead dolphins and sea turtles were found, and toxic algal blooms closed Mississippi beaches for much of the summer.

Mississippi Attorney General Jim Hood has given notice that he's going to sue the U.S. Army Corps of Engineers for economic damages and to force environmental impact assessments in developing flood mitigation strategy.

"If these floods keep continuing, we need to have a study that says we can at least do this to make our environment safer," Hood says.

A spokesman for the Corps of Engineers New Orleans district says the agency does not comment on pending litigation. But he says a modeling study is underway to better understand what's happening with the Mississippi River.

He says the system now in place is operating as designed to prevent "catastrophic consequences." Spillway openings are triggered when levee systems below are maxed out during high water.

Down on the docks at the Biloxi harbor, Van Pham is scooping white shrimp from a cooler to sell from the boat the April Dawn. He's one of only a handful of fishermen selling seafood from their boats. Pham says business is slow, and the shrimp are hard to come by.

"Right now in Biloxi, right now don't have no shrimp," says Pham. "I have to go all the way to Mobile to get the shrimp."

That's an eight-hour run for him, with extra fuel. And he didn't really catch enough shrimp to make a profit.

He's questioning whether there's a future on the water. And he's not alone. 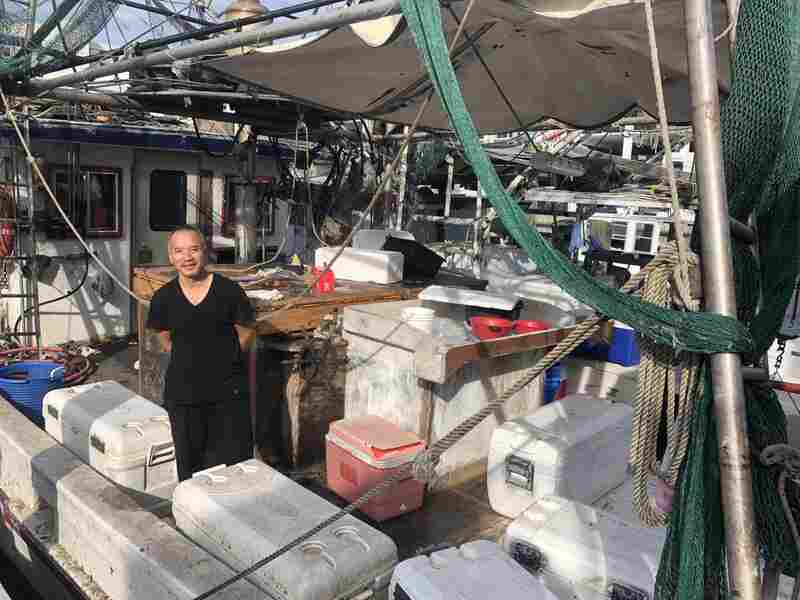 Shrimper Van Pham is selling white shrimp and questions whether there's a future on the water. Debbie Elliott/NPR hide caption 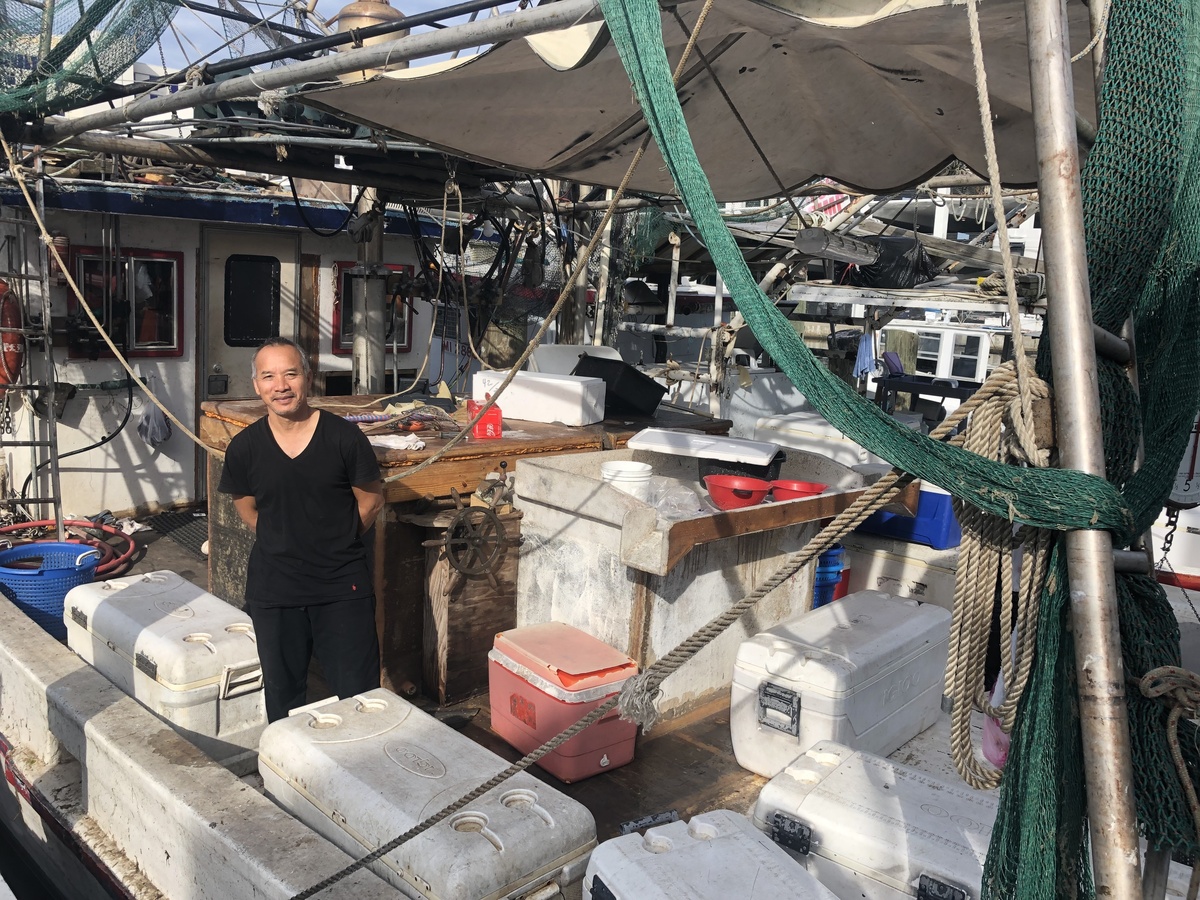 Shrimper Van Pham is selling white shrimp and questions whether there's a future on the water.

"It's already dying," says Christopher Rhodes with Mississippi Commercial Fisheries United. He's a third-generation fisherman, but at 29 he's not sure he'll stay in the business.

"The catch isn't what it used to be, and then you have something like this happens. I mean it's already hard," says Rhodes. "It just brings us down to our knees."

The group is calling for Mississippi interests to have a stronger voice in flood control policy.

Oyster farmer Anita Arguelles says they should be part of the solution.

"Our futures and our financial futures are tied to decisions that other people are making in other states," Arguelles says.

Off-bottom oyster farming is new to Mississippi this year, and Arguelles says losing the first harvest was a serious setback. But she's not ready to give up.

"If we're gonna eat oysters, we're gonna have to grow oysters," says Arguelles. "And so managing that water that's coming down those waterways and our huge watershed and the United States is critical."

She's tending to a new crop of oysters now and says she's tentative but excited that this batch will make it to market.