Accessibility links
Record 'King Tides' Mean Months-Long Flooding In Florida Keys Exceptionally high "king tides," combined with rising seas, have left some Key Largo residents surrounded by water. Getting out of the house for work and daily chores can be a challenge. 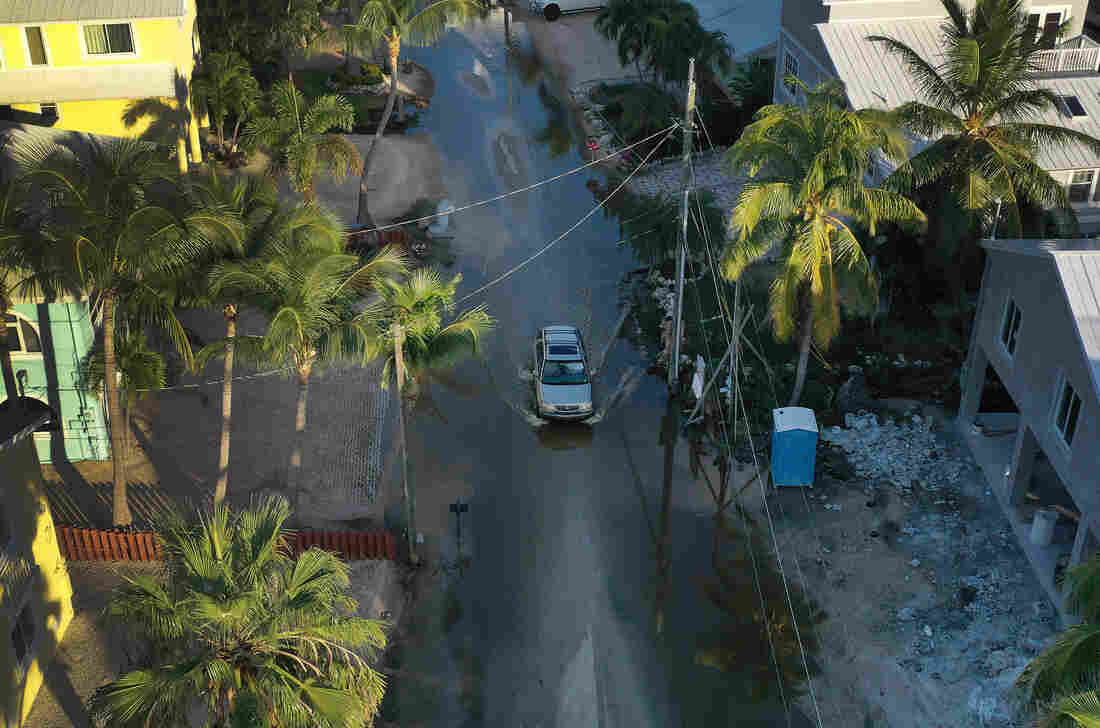 An aerial view from a drone shows a car as it drives through a street flooded with ocean water in Key Largo, Fla., on Oct. 22. Joe Raedle/Getty Images hide caption 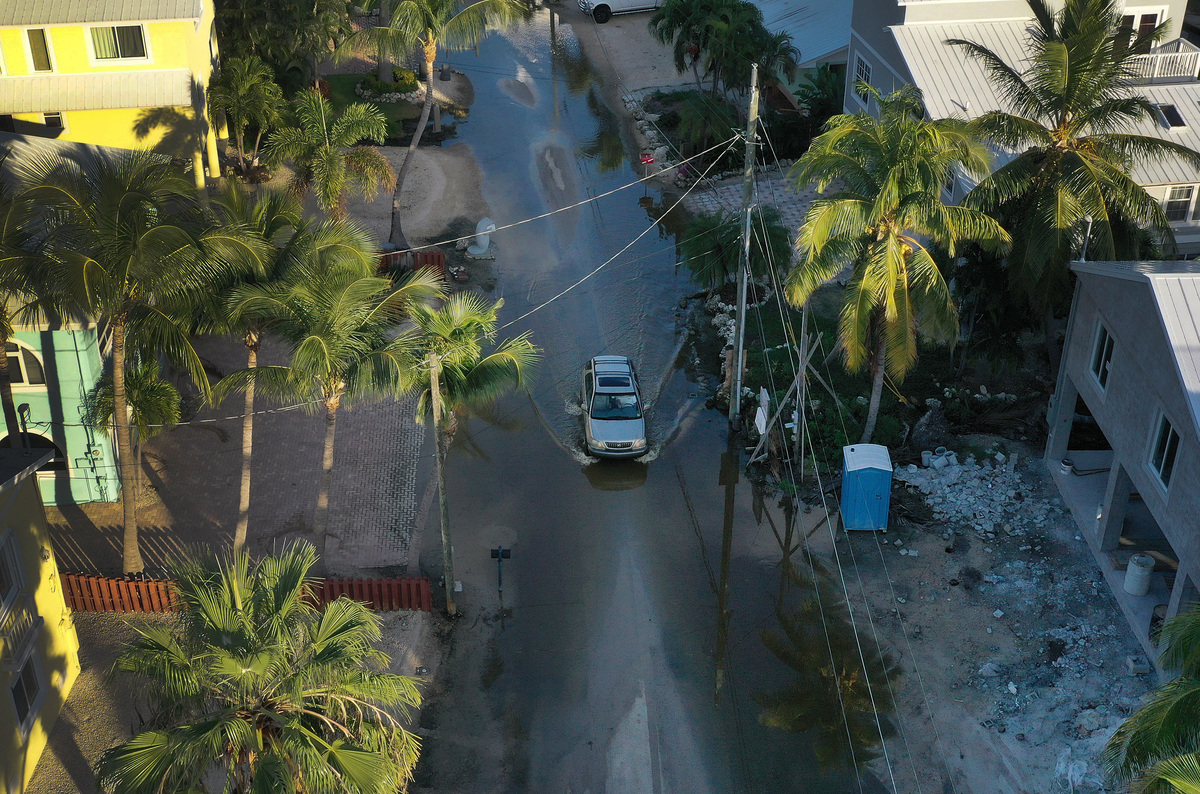 An aerial view from a drone shows a car as it drives through a street flooded with ocean water in Key Largo, Fla., on Oct. 22.

On Key Largo, to walk to Paul Butler's house it's best to wear rubber boots. "Did you see the 'No Wake' sign?" he asks. The recently installed "No Wake" signs are for drivers, not boaters.

There are several inches of water on his street and others in this low-lying neighborhood. Butler has lived here 25 years and seen this kind of flooding before.

"It used to happen once a year during king tide, but it would only last for like a week or 10 days," he says. "This year, it's been going on for about 75 days, I think." Other neighbors put it at 80 days and counting.

The flooding here and elsewhere is happening during so-called "king tides." Those are times, mostly in the fall, when the moon's gravitational pull means tides are higher than usual.

On Key Largo, the water doesn't drain, because there's nowhere for it to go. Brian Boylan says his flooded street is basically even with the bay, and during king tide the seawater overtops the canal in his backyard. "You can see it coming right out of the ground," he says. "Sometimes you can even see it bubbling."

Needless to say, Boylan and other neighbors aren't happy that they're now surrounded by water. The biggest problem? "Just driving through it," he says. "You're ruining your vehicles. My truck's all rusty underneath." Saltwater is corrosive. He says, "We wash it off, but you can't get it. The brakes will probably go."

Making things worse, the neighborhood was built on fill and residents can point to areas where the ground has settled. But another factor is the rising sea level.

"Obviously ... it's gone up, because I can tell from my dock," says Boylan, who built his house and dock 40 years ago. He says the water at the dock now is 6 inches higher than it used to be. 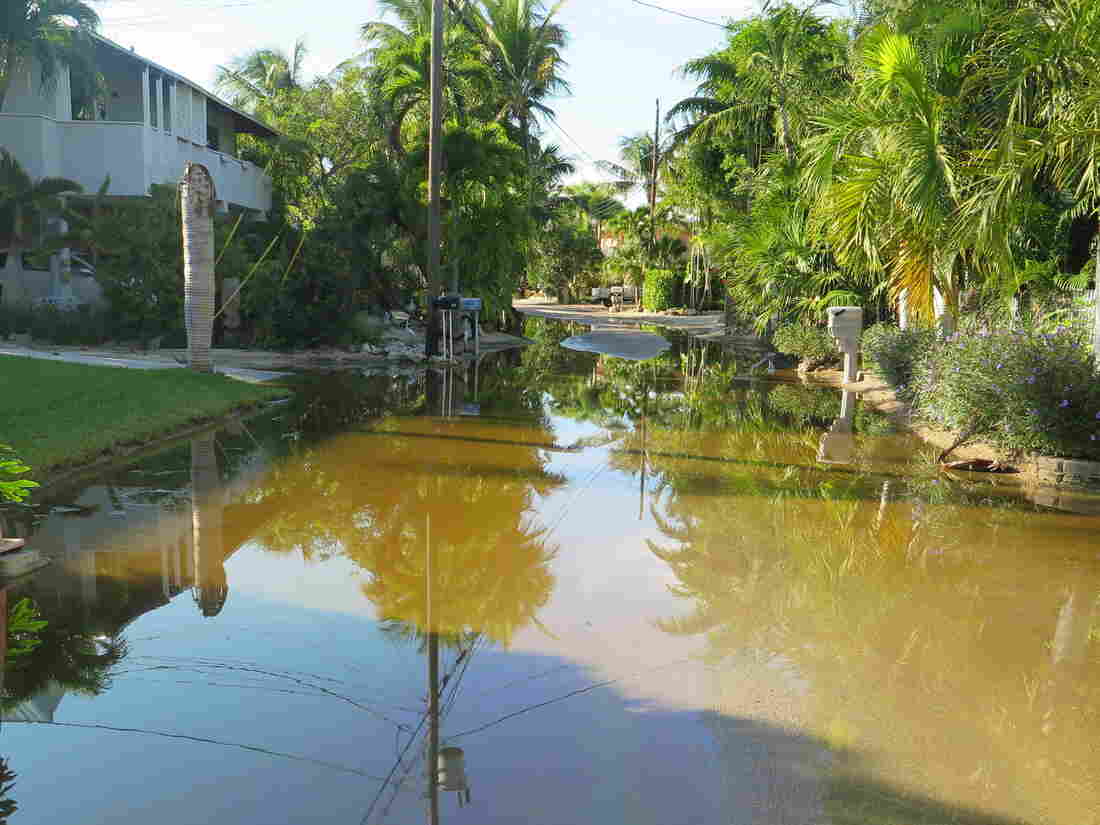 Residents in Key Largo say their streets have been flooded for more than two months from a series of king tides. Greg Allen/NPR hide caption 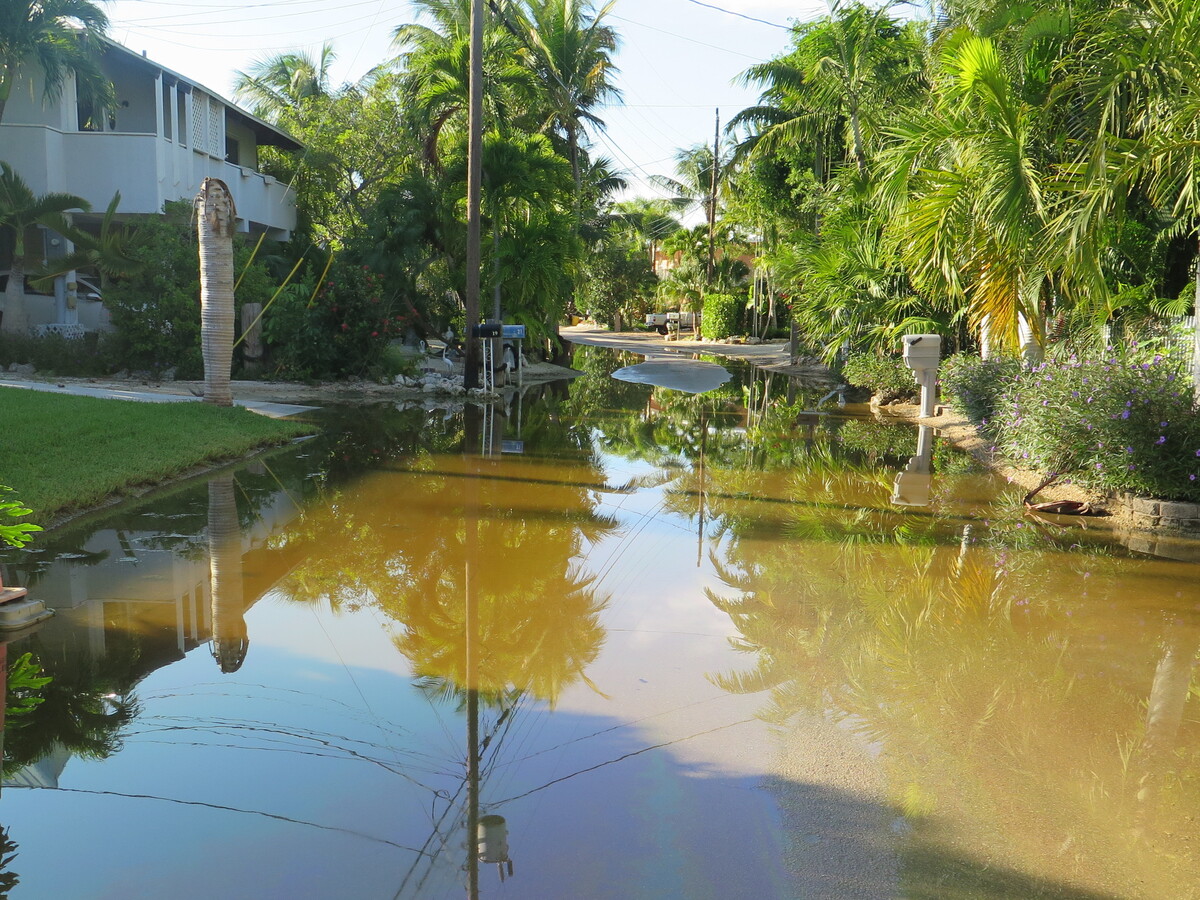 Residents in Key Largo say their streets have been flooded for more than two months from a series of king tides.

Not far away, on Virginia Key, scientists are also charting the rising sea level. Brian McNoldy is with the University of Miami's Rosenstiel School of Marine and Atmospheric Science. He's been monitoring a tidal gauge; for five months running, the average has broken tide records, he says.

"Right now, we're running about 8 to 9 inches above them," McNoldy says. "But there have been times in recent weeks when we've been up to 18 inches. And that definitely is impactful."

Increased flooding from high tides is a problem not just in Florida, but also in other low-lying coastal communities around the U.S. Boston, Charleston and Norfolk are just three cities that have seen flooding this year during exceptionally high king tides.

William Sweet, an oceanographer with NOAA, released a report earlier this year warning of the increasing threat of high-tide flooding. He says unfortunately, the predictions are already coming true.

"Sea level rise, decades' worth of it has caught up," Sweet says. "These sort of garden variety events, you know, seasonal high tides, winds blowing offshore that used to not be a problem?" Now, he says, they are a problem, causing flooding in an increasing number of coastal areas. 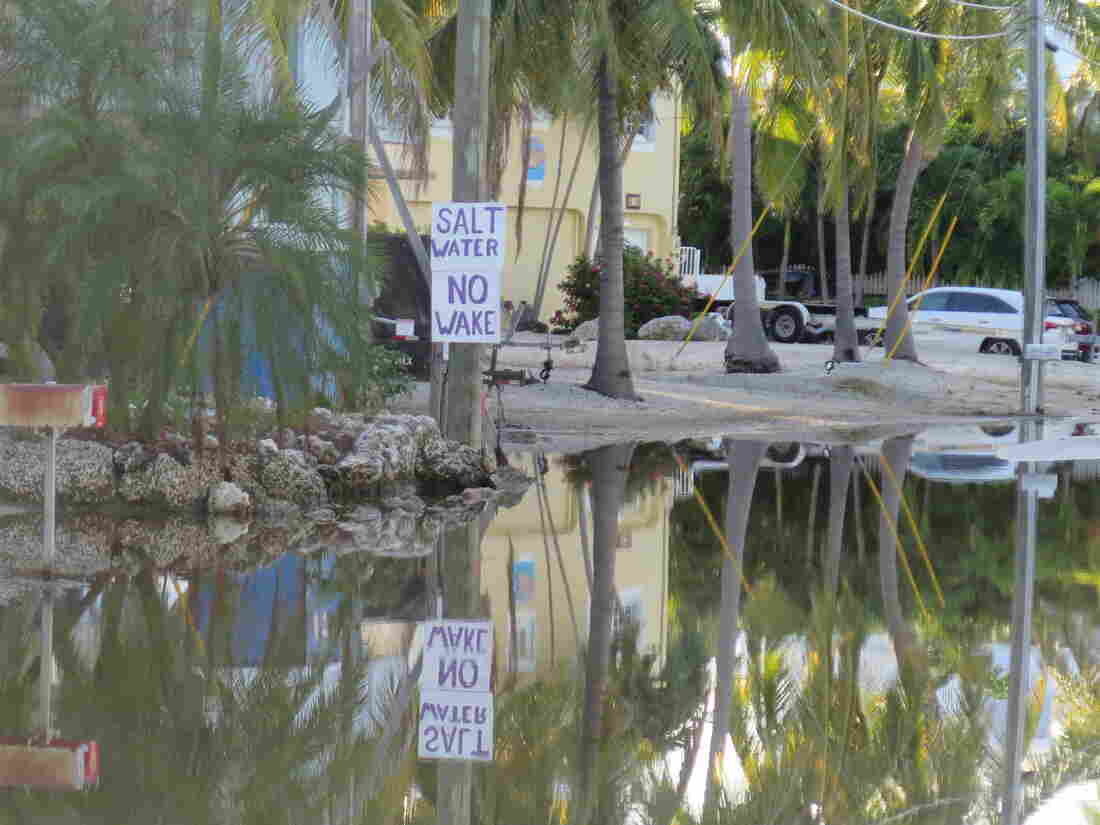 Residents say the biggest problem is the corrosive effects of seawater on their vehicles as they're forced to drive through flooded streets. Greg Allen/NPR hide caption 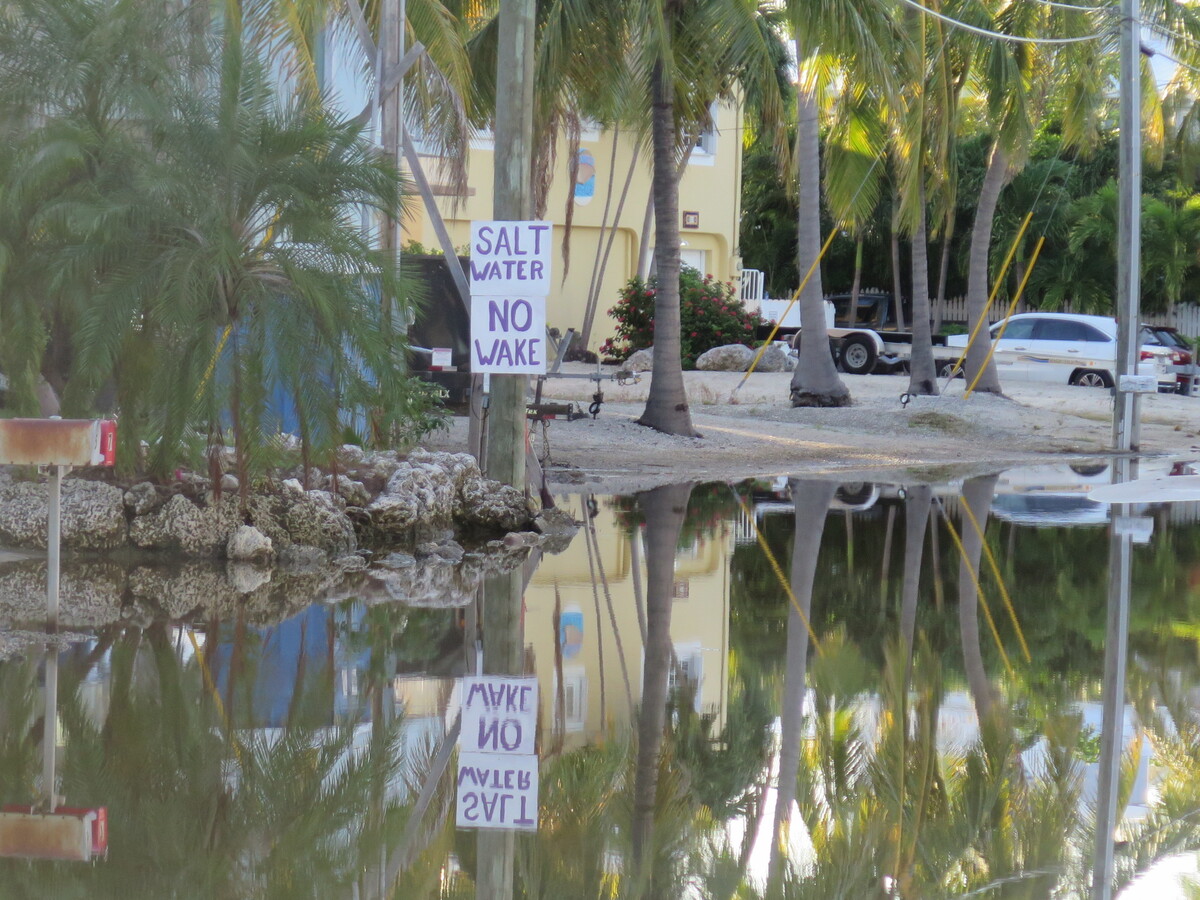 Residents say the biggest problem is the corrosive effects of seawater on their vehicles as they're forced to drive through flooded streets.

Although it's a global issue, for now it's local governments that are faced with the challenge of addressing high-tide flooding.

In Monroe County, home to the Florida Keys, local officials are hoping to get $150 million in federal funds, money allocated to help the area rebuild stronger after 2017's Hurricane Irma. Monroe County wants to use it to raise roads and buildings and improve drainage.

One of the projects would be in Paul Butler's long-flooded Key Largo neighborhood, but that will take years. In the meantime, he says, residents are being forced to make their own adjustments.

"It's kind of tough to go out and walk your dog unless you have hip boots on," he says. "There [are] people that are going to work that won't drive their vehicles through here. And they park up to the grocery store on U.S. 1 and they'll walk up."

If history is any guide, Butler says, flooding here should subside soon, at least until the next king tide.