Accessibility links
Tomi Adeyemi On 'Children Of Virtue And Vengeance,' Her 'Blood And Bone' Sequel In the sequel to author Tomi Adeyemi's West-African-inspired young adult bestseller, the maji in the land of Orïsha have their powers back — except the monarchy and military now have magic too. 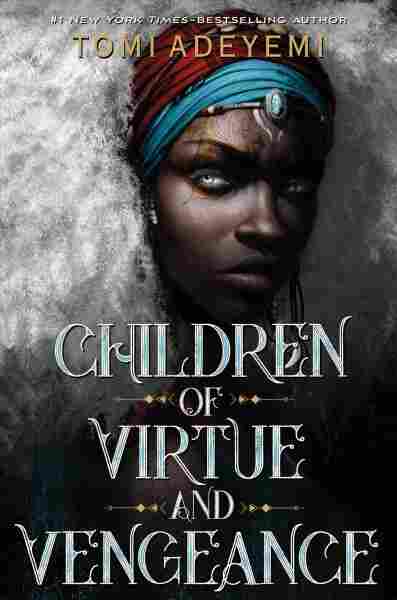 Children of Virtue and Vengeance

Children of Blood and Bone was an instant success last year.

The young adult fantasy novel by then-24-year-old author Tomi Adeyemi has so far spent 89 weeks on The New York Times bestseller list. It made countless best books lists, and it was optioned for a movie by Disney. It spoke to people.

"I always pitched it as Black Panther with magic," Adeyemi says. "It's this epic young adult fantasy about a girl fighting to bring magic back to her people."

And now there's a sequel: Children of Virtue and Vengeance. The heroine, Zélie, has succeeded in her quest to bring magic back to her people, the maji, and the land of Orïsha. But the nobility and the military now have powerful magic, too. And civil war looms.

For Zélie and her ally Amari — a runaway princess who has joined the rebellion, so to speak — the question becomes: Now what? And how will their personal traumas play out?

"I'm really mean to my characters," Adeyemi says. "And so they have a lot to both deal with personally, and in terms of like: OK, well, who am I? What am I wrestling with? What do I want? Is what I want actually what you want? Are we actually still on the same team in this? It's about kind of how complicated things is — especially with people that you love."

On the Nigerian and Yoruban roots of her fictional universe

'Children Of Blood And Bone' Is A Feast For Hungry Readers

So the Orisha [deity] that was the inspiration for this world — I didn't know at the time that that was a part of my Nigerian heritage. ... It's a religion. It's a mythology. It started in West Africa and then it was disseminated through the world through the slave trade. And so it sort of looks a little bit different everywhere you see it. So like, for example, you have Santería in Cuba, Candomblé in Brazil. And so it's this rich pot in history, and it resonated with me so strongly. So then to find out that, like, wait, this is a part of me? It was this gift and this ability to build a world based off something that I loved and something that was close to my heart.

On how the blackness of her characters has changed over time

My stories, I call them fantasy memoir fan fiction, in the sense that the common thread has always been like — the first story I ever wrote, I wanted a twin and a horse, and my parents wouldn't give me a twin and a horse, so I'm like: I will give myself a twin and a horse. And I wrote this 30-page story. I was around the age of 6, and the twins were named Tomi and Tomi. And, you know, I was like: OK, cool, now I have everything I wanted.

It kind of kept going with that — just that what I wanted became more magical.But subconsciously, what I wanted also became: Oh, in this, my fantasy, I can be white. Like, oh, I can have magic and I can be white; or I can, you know, shoot lightning out of my hands and I can be biracial. And it was like: It took a lot for me to become the type of person who could even write a story like Children of Blood and Bone.

And really, Children of Blood and Bone too also came from seeing two pieces of of art with black people in [them] — and some of the first two of my life, if not the first ever. And so I'm like: If two photos, two fantastical illustrations of black people, created that 600-page world? ... I always try and quantify representation because it's really hard to explain to someone what not seeing yourself does because it's so internal and it's so deep inside. But it's like: If two pictures equals this book, what do you think this book can mean for people? What do you think this cover can mean for people? I was like: Just a little bit of representation can be monumental. ...

Tomi Adeyemi On 'Children Of Blood And Bone'

One picture was: I was in a gift shop in Brazil; I was only there because it was raining and I didn't want my hair to get wet. And I see this postcard with the Orisha on it. I didn't know what it was at that time, but I just saw this beautiful, black goddess commanding the sea and this beautiful dark-skinned man breathing fire. And I had never, ever seen, like: Wow, that's myself; like, this is me. This person is even darker than me, and she's doing this beautiful magic. And so that was kind of instantaneous. Like, I saw that, and the world of Orïsha came to me very quickly.

And then about eight months later, I saw this picture on Pinterest. It was a digital illustration of this black girl with luminescent green hair. And I'm like: OK, what if she lived in, like, a space colony? What if she was like a fisherman or a fisherman's daughter of some sort? What if she had to go to the market one day? Oh, what if she's in the market and this girl runs up to ... what if you took this thing and put it in that world you have? Do they fit? Oh, my gosh. They fit so well. And it was two photos of people who look like me when I was, what, 23, I think? Imagine if I had had that when I was 6.

The older I get, the more I realized the power of institutions. And institutions are old. They're powerful for a reason. They have been set up a long time ago by very rich and powerful people to disenfranchise you systematically.

And so I think sometimes it's like we focus on — we can look at our political history. We focused on [electing] Obama because that's a goal — that's a battle we can try and fight, like let's try and get this person in the White House. Oh, my gosh, he's in the White House. Magic is back. It's great.

But suddenly police brutality is — I won't, I don't know if it's necessarily on the rise, and this is NPR, so I really don't want to say anything or something that might not be a true fact — but at least it became popularized, in the sense that we realized that was going on. It started with Trayvon Martin and it kind of just snowballed. That was during the Obama presidency. ...

It's like: Yes, you can focus on getting magic, but then you'll see that magic wasn't completely the problem. The entire system is against you. So what are you going to do?

Samantha Balaban and Barrie Hardymon produced and edited this interview for broadcast. Patrick Jarenwattananon adapted it for the Web.