Accessibility links
As Climate Warnings Grow, Energy Companies Face A 'New Frontier Of Threats' Natural disasters, protests and stark scientific reports are heightening concern over climate change. And companies are under pressure from banks and investors to green their corporate images. 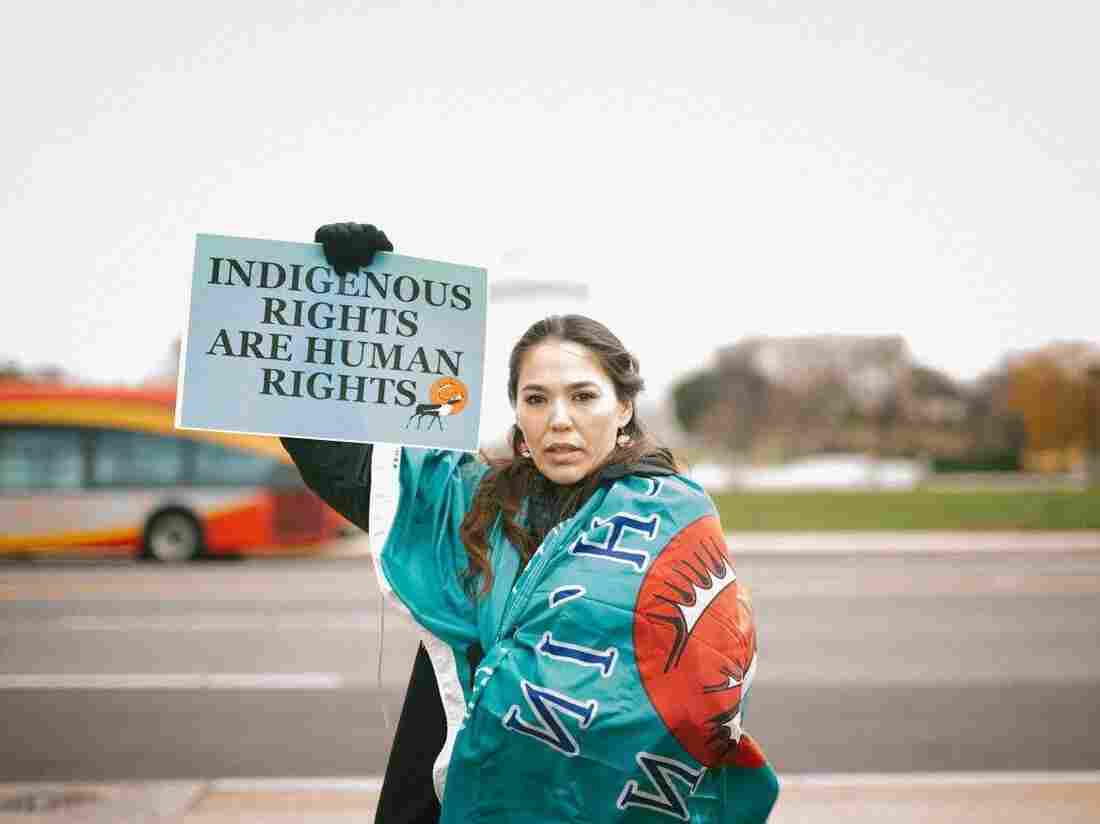 Bernadette Demientieff of the Gwich'in Steering Committee participates in a December 2017 event in Washington, D.C., at which advocates pushed Congress to protect the Arctic National Wildlife Refuge from oil development. Courtesy of Dylan McLaughlin hide caption 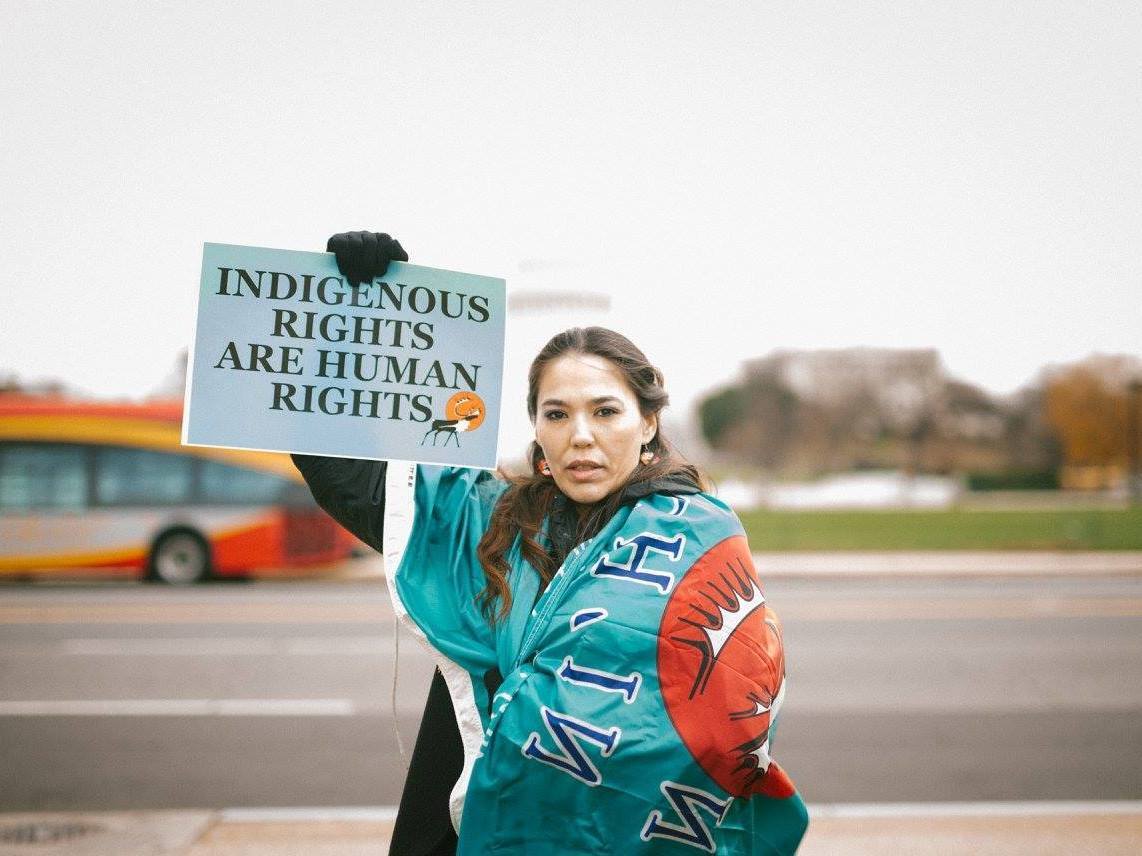 Bernadette Demientieff of the Gwich'in Steering Committee participates in a December 2017 event in Washington, D.C., at which advocates pushed Congress to protect the Arctic National Wildlife Refuge from oil development.

Bernadette Demientieff hails from a region marked by pristine panoramas, droves of Arctic wildlife and decades of controversy. For millennia, her people, the native Gwich'in Nation, have guarded the precious swath of Alaskan land today known by many as the Arctic National Wildlife Refuge.

But in the coming months, the Interior Department will sell leases to companies that intend to drill for oil and gas in the refuge's coastal plain. The sale comes two years after the Trump administration first opened the refuge to energy development, inciting widespread opposition and halting a decades-old struggle over the refuge's natural resources.

So this October, as on countless other occasions in recent years, Demientieff was far from home. Instead, she was on her way to Wall Street with one mission in mind: to convince several of the world's most powerful banks to officially — and publicly — say they won't finance oil drilling in her ancestral land.

Through the ages, Demientieff said, Gwich'in livelihood has hinged on the Porcupine caribou herds that each year birth their young on the very slab of land being put up for lease.

"As indigenous people, our identity is interconnected to the land, to the water and to the animals. And our identity is not up for negotiation — it's not for sale," Demientieff said.

"We're simply trying to survive. So we're doing everything we can — from corporate, to Congress to the United Nations," she added.

And at a time when scientists say the atmosphere can't continue accommodating rising levels of greenhouse gases, Demientieff is among opponents who argue that oil development in the Arctic refuge will cause the precious region — and those who depend on it — unnecessary harm. In turn, there's widespread uncertainty regarding which companies, if any, will take on the risk of doing business in such a remote and controversial region.

What's happening in Alaska is just one example of the challenges that companies involved in energy development face today. Corporations' bottom lines have long hinged on how their customers and the public see them. But as natural disasters, sea level rise and extreme temperatures jolt communities worldwide, those affected are looking for someone — for anyone — to blame for climate change. In turn, experts say, companies are under heightened financial pressure — including from banks and investors — to green their corporate images in response to an increasingly alarmed society.

"When you start to think about public pressure on institutions, what becomes 'right' depends on what people care about and whether or not it affects your bottom line," said Matthew Kotchen, an economics professor at the Yale School of Forestry & Environmental Studies.

But today, opposition efforts are much more "sophisticated" than they used to be, said Andrew Logan, director of oil and gas at Ceres, a nonprofit that advises investors on sustainability.

"It's not just protests in front of construction sites anymore," he said. "There is robust legal strategy around things like pipelines; there's a messaging strategy; there is pressure on banks and even on insurance companies."

Dozens of major oil and gas companies are currently entangled in a suite of court cases brought by cities and states around the U.S., said David Spence, an expert on the law and politics of energy regulation and a professor at the University of Texas at Austin.

Baltimore and San Francisco are among those that have accused the companies of knowingly hastening global warming. The suits seek billions of dollars in compensation for the weighty costs of protecting cities from sea level rise, among other effects of climate change. 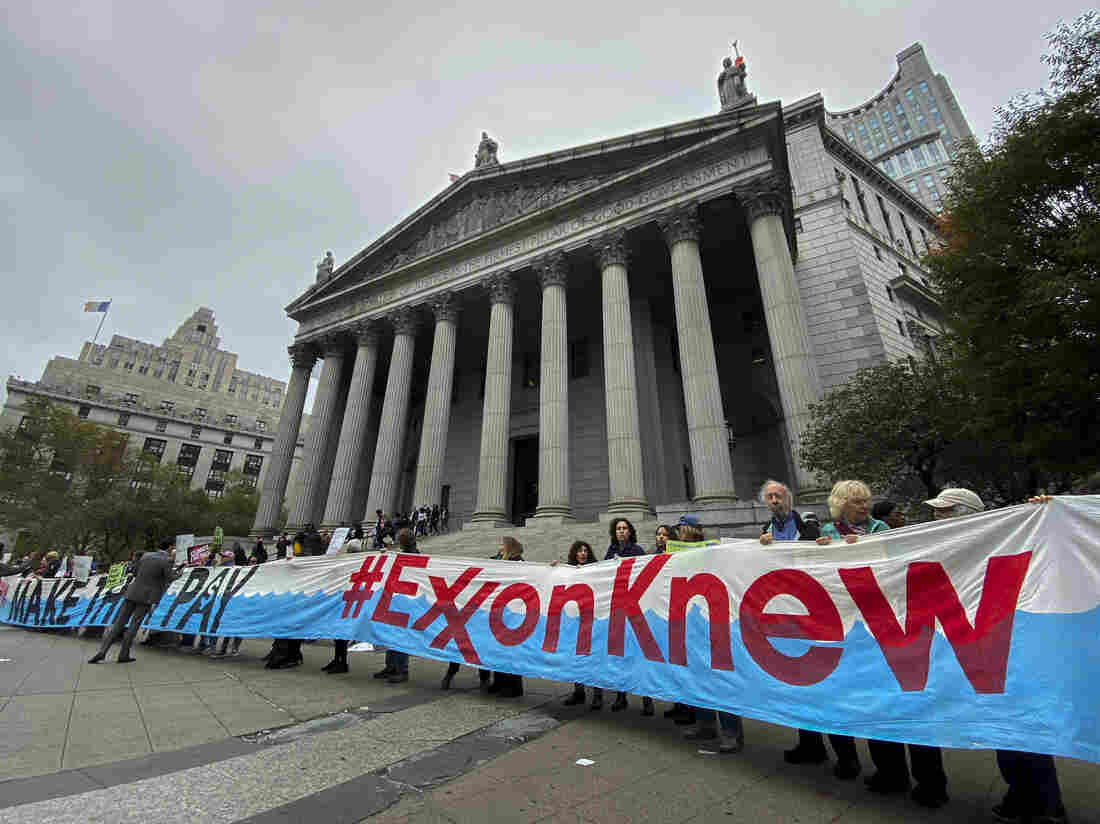 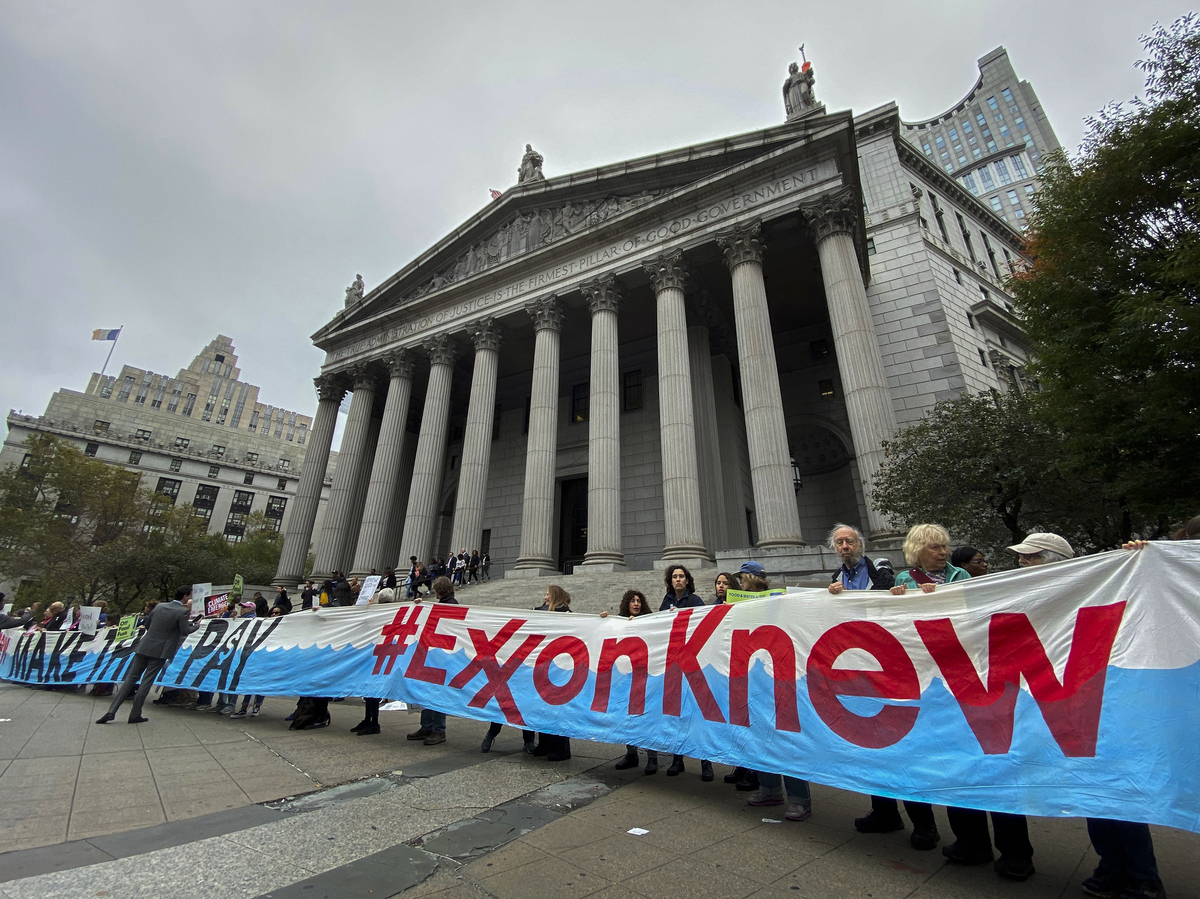 Protesters demonstrate against Exxon Mobil in New York City in October. New York state's attorney general alleged that the company misled its investors by lying about the potential impacts of climate regulation on its bottom line.

Aside from hefty litigation fees and persistent bad press, energy companies are also facing global divestment campaigns, Spence said. In recent years, powerful financial institutions have come under heightened pressure to shift their fortunes away from companies whose products are warming the planet.

Last month, during the 136th annual Harvard-Yale football game, students stormed the field at halftime and demanded that the universities divest their endowments from fossil fuels. The demonstration garnered national headlines and tweets of support from Democratic presidential candidates Sen. Elizabeth Warren and Sen. Bernie Sanders.

In September, the University of California system announced that it will divest its $70 billion pension fund from fossil fuel companies and that it has already made its $13.4 billion endowment "fossil free."

"We have been looking years, decades and centuries ahead as we place our bets that clean energy will fuel the world's future," investment managers Jagdeep Singh Bachher and Richard Sherman wrote in a Los Angeles Times op-ed announcing the news.

"We have chosen to invest for a better planet, and reap the financial rewards for UC, rather than simply divest for a headline," they continued.

UC is among countless institutions that have made similar moves.

In November, the European Investment Bank announced that it will stop financing fossil fuel energy projects after 2021. And in July, Chubb insurance company became the first U.S. insurer to announce its plans to phase out its investments in coal, joining a slew of its European counterparts.

These pressures aren't limited to industrywide opposition efforts. Opponents are also leveraging social media and legal and financial tactics to disrupt energy projects with what they say are severe environmental and human rights implications. Will Nichols, an environmental analyst at risk consultancy Verisk Maplecroft, called it a "new frontier of threats."

"The opposition to the oil and gas industry is coming from different fronts than before," he said.

The Dakota Access Pipeline was a notable example. The project incited a national outcry, months of litigation, on-site demonstrations and sweeping divestment campaigns. The Standing Rock Sioux Tribe, accompanied by droves of supporters, opposed the pipeline's proposed route, saying it would endanger the tribe's nearby reservation and the tribe's health, safety and cultural heritage. 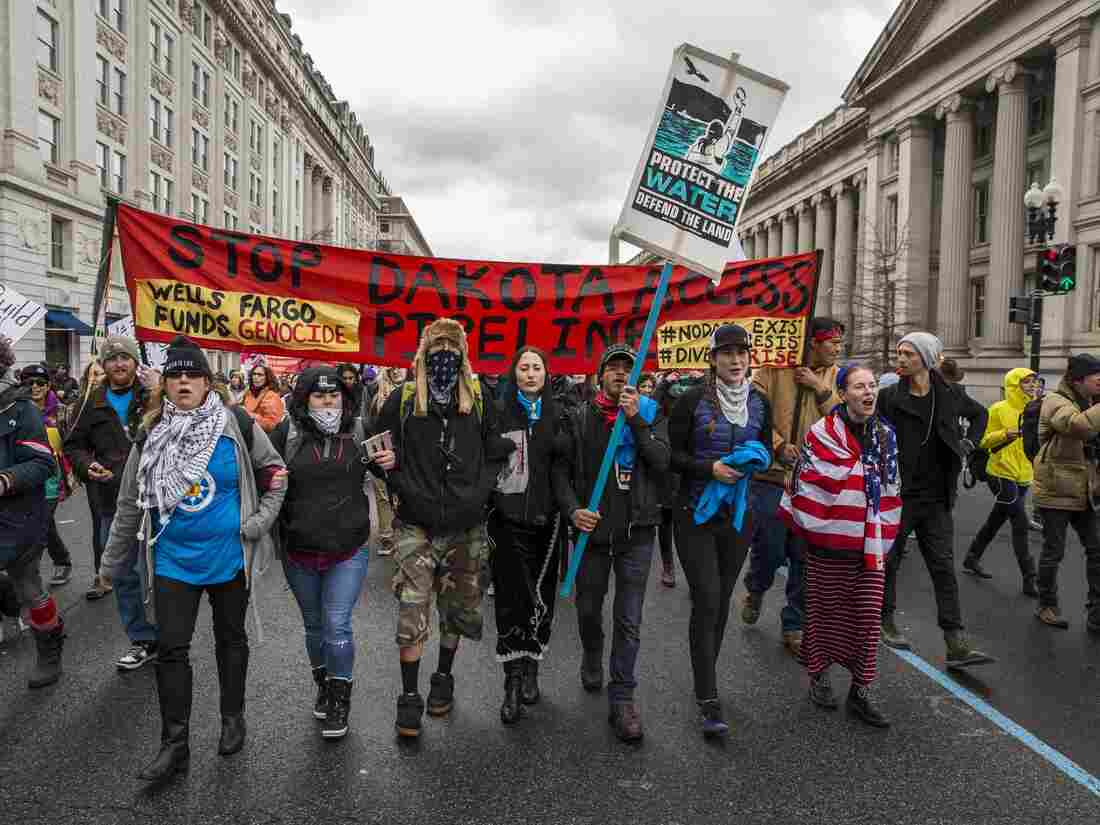 Protesters walk to the White House in Washington, D.C., during a demonstration against the Dakota Access Pipeline in March 2017. Samuel Corum/Anadolu Agency/Getty Images hide caption 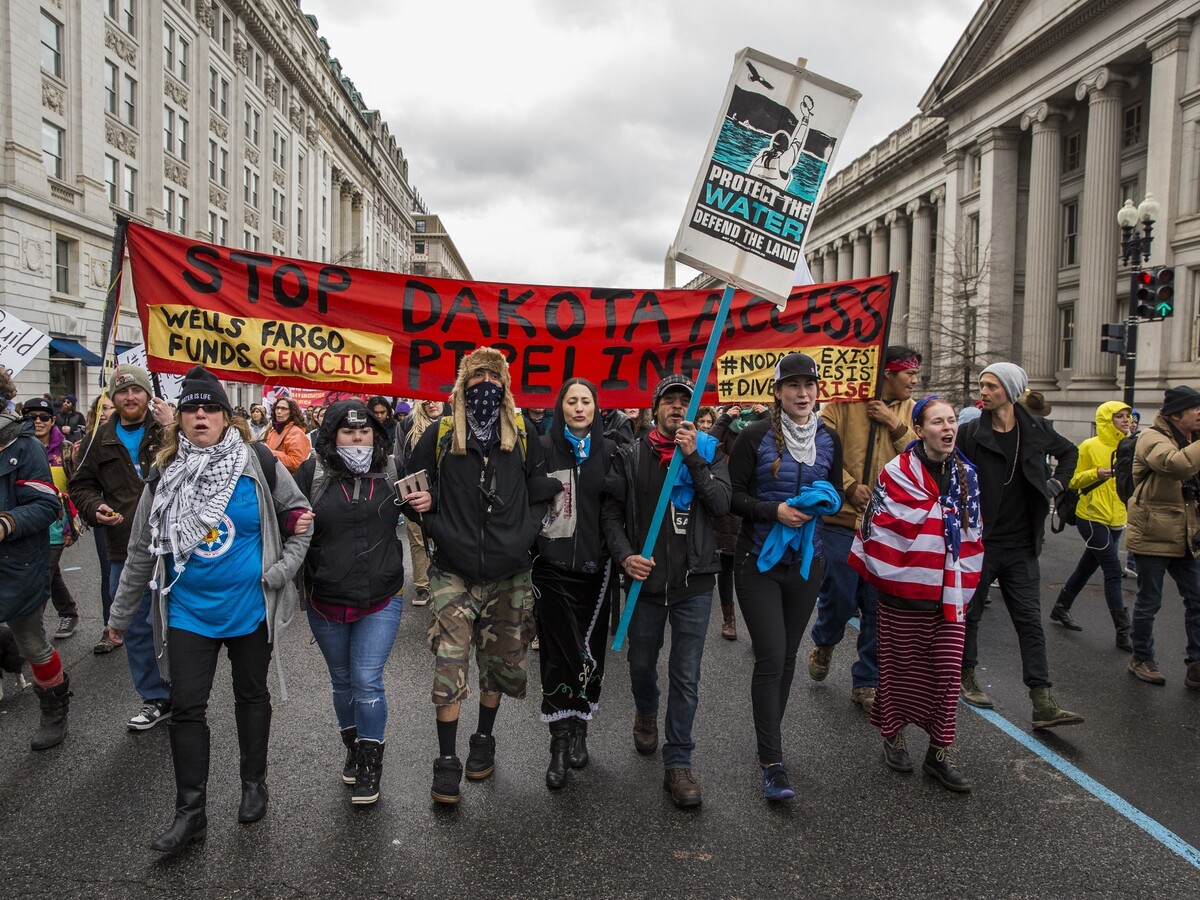 Protesters walk to the White House in Washington, D.C., during a demonstration against the Dakota Access Pipeline in March 2017.

The companies involved in the project suffered major losses in the controversy's aftermath, a 2018 analysis found. Energy Transfer Partners, the pipeline's parent company, saw its stock price drop nearly 20% between 2016 and 2018, the report says, while the S&P 500 rose nearly 35% over the same period.

The fallout also hit the 17 banks that financed the pipeline. Wells Fargo — which loaned $120 million for the project — lost over $4 billion when three cities ended their relationships with the bank in protest of its involvement with the pipeline, according to the analysis. They included Seattle, Santa Monica, Calif., and Davis, Calif.

Pipelines have become a "lightning rod for protests," Nichols said. But drilling in the Arctic National Wildlife Refuge is a "reputational minefield," he said.

"Whoever is the first mover in there, I think, is going to probably cop a lot of flak," Nichols said. "I mean, it's got all the conditions whereby it could really turn into an issue."

A dozen global banks, based largely in Europe and Australia, have already publicly promised they won't finance Arctic oil and gas development in what seems to be an acknowledgment of the risk intrinsic to drilling in the region. Several of the policies mention the Arctic refuge specifically.

Major U.S. banks haven't made explicit commitments to do the same.

Goldman Sachs, for example, outlines its human rights and environmental concerns in an overall policy framework but doesn't directly mention the Arctic or the refuge specifically. Nonetheless, a Goldman Sachs spokesperson confirmed that the bank "has not and would not expect to finance oil exploration in the Arctic National Wildlife Refuge."

According to a 2019 BP report, renewable energy will likely become the largest power source by 2040.

So while there's still "tremendous" demand for oil and gas, Spence said, energy companies — as well as the financial actors that back them — are well aware that the market is slowly beginning to shift away from fossil fuels.

So companies involved in energy development are working to "position themselves to be part of a change, whatever that change may be," he said.

In the finance sector, major banks, insurers and wealth managers aren't just divesting — they're also boosting their investments in renewable energy and brandishing bold commitments to a greener future. The world's largest institutional investors, for example, have in recent years launched droves of "sustainable" funds that purport to be financially competitive and in line with investors' personal values.

More and more investors are building portfolios with purpose. Learn more about our range of #ETFs that can help you progress towards your investment ideas and goals. https://t.co/ulj8PDEk79 pic.twitter.com/1dOJagcfcA

For instance, Norway's Equinor has built up "big business in wind power," said Logan, the sustainability adviser. And he said Shell is aiming to transition into an electric power company by midcentury.

From hours in a lab to petri dishes, find out what it takes to research the world’s next big energy source. pic.twitter.com/6dBH4FdatK

But Logan also said that while some corporate efforts seem to be major steps in the right direction, others appear more like attempts to "combat the public narrative" around the oil and gas industry. He and Nichols both cited Exxon's recent advertising campaigns, which detail the oil giant's investments in carbon-capture technology and low-carbon energy solutions.

"I mean, you switch on the TV, you can't avoid an Exxon commercial about how they're investing in technology to turn algae into biofuels," Nichols said. "They're very small investments compared to their overall portfolios. So whether it's actually translating into genuine action, I think, is kind of debatable."

An Exxon spokesperson said Exxon has spent more than $10 billion in the past two decades on developing "higher-efficiency and lower-emission energy solutions." In addition to existing energy solutions like wind and solar power, new technologies are "required" to achieve substantial greenhouse gas reductions, she added.

Nonetheless, Nichols and Logan remain skeptical that many energy companies' initiatives will amount to the dramatic emissions reductions that scientists say are necessary to stop climate change in its tracks.

"If you really believe that climate change is an existential challenge to your industry, then you would go well beyond that," Logan said. "You would make systematic and wholesale changes in your-long term strategy."