Accessibility links
His Company Makes Speakers. Now He's Speaking Out, Opposing Tariffs The trade war with China is weighing on America's manufacturers. "[The tariff burden] comes out of our bottom line," says Dan Digre, president of Misco, a speaker-maker in Minnesota. 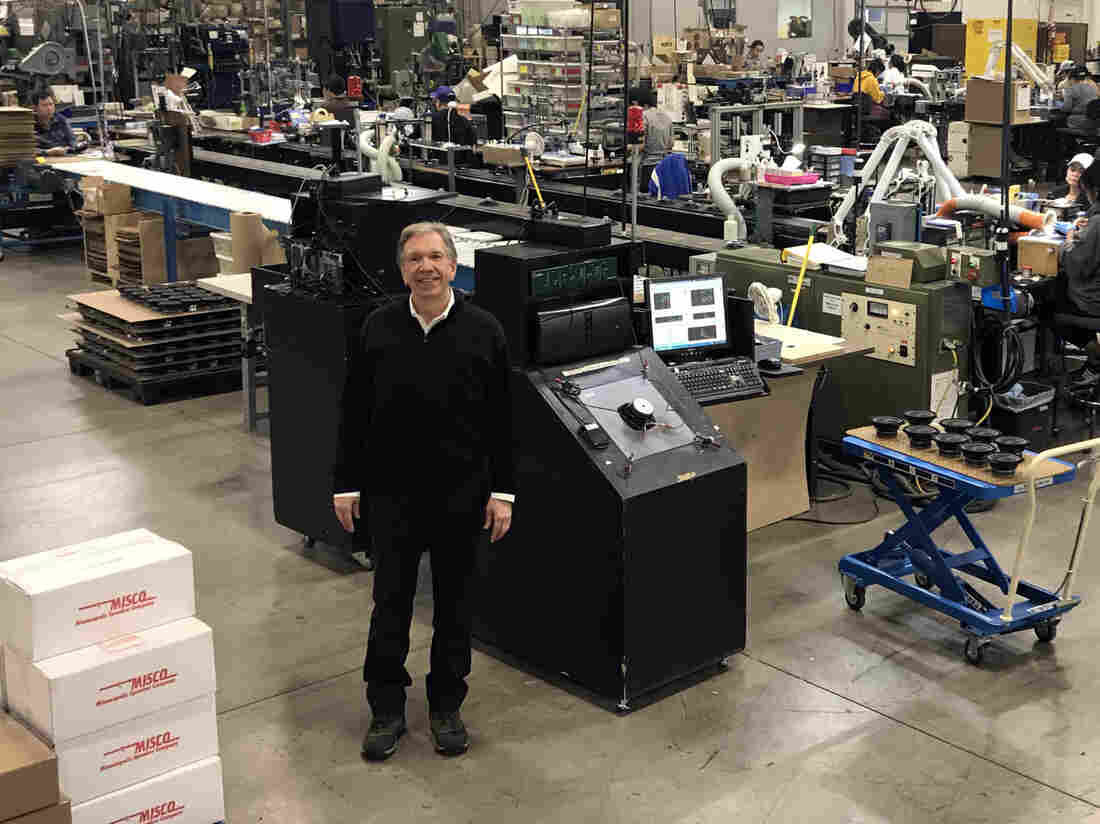 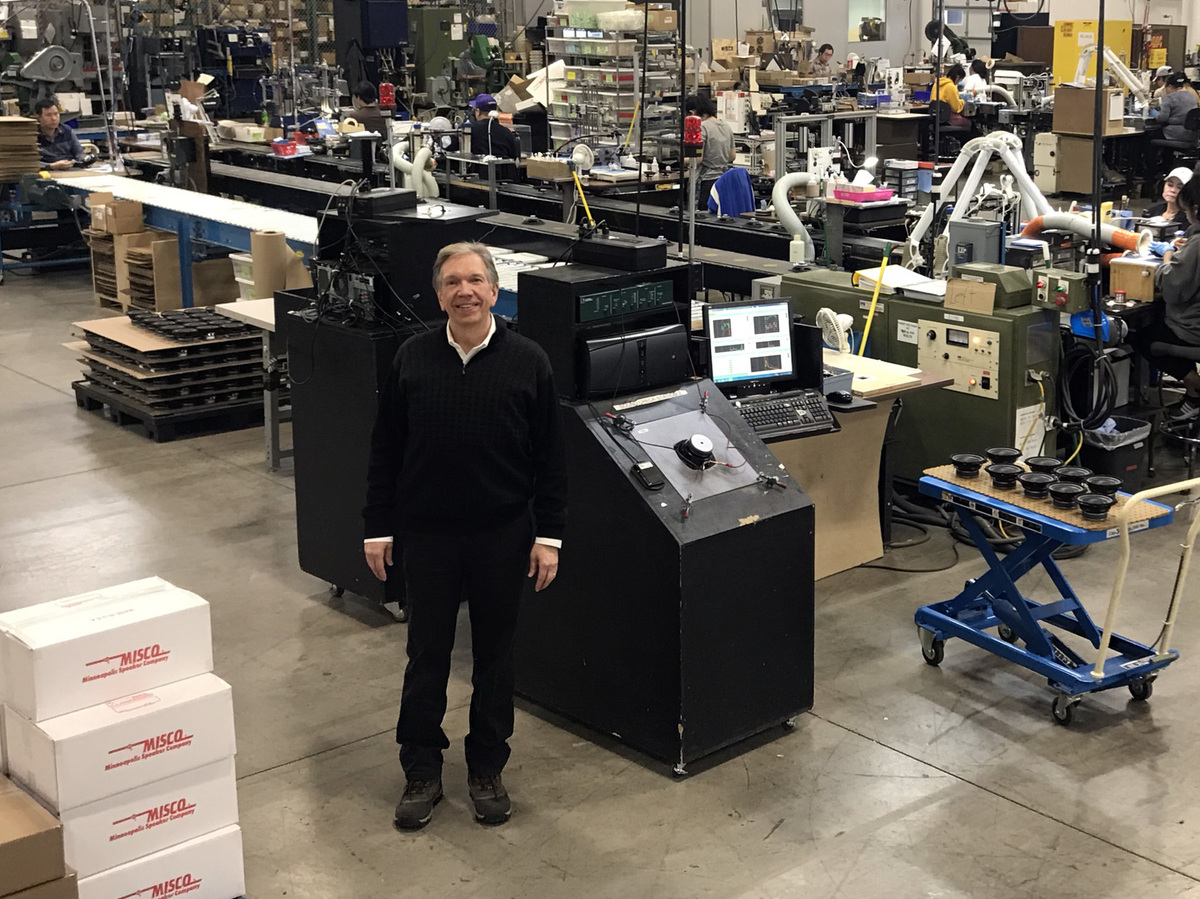 Dan Digre, who owns a Minnesota factory, Misco, that makes speakers, says tariffs are hurting his ability to compete.

The Misco speaker company in St. Paul, Minn., is celebrating its 70th anniversary this year. But the company's future is uncertain — a result of the trade war between the U.S. and China.

"He was a B-17 radio operator and came back to the United States and married a woman with a bad radio," Digre says. "Turned out the radio wasn't bad but the speaker was bad, so he started his own speaker repair business."

Today, Misco employs about 100 people in the Twin Cities and manufactures a wide variety of speakers for musicians, home theater buffs, even drive-through restaurants.

Digre, who's now the company's president, says there used to be a substantial speaker industry in the United States. But over the past two decades, most manufactures moved offshore. And their suppliers moved with them.

"Either suppliers went to China or they probably went out of business," Digre says.

His factory is still in Minnesota, but it depends on some components imported from China. Since last fall, the company has had to pay tariffs on those components — tariffs that are now 25%. Ironically, if Digre built whole speakers in China, like some of his competitors do, he'd have to pay only a 15% import tax.

Digre has tried passing some of his tariff bill on to customers, and he has asked component suppliers for a tariff discount. But the company has had to absorb most of the extra cost itself.

"It comes out of our bottom line," Digre says. "And that's the money that we need to be reinvesting in new technology, in new products — all of the things that makes your business competitive in a global economy."

Every time Digre imports components from China, he gets a bill from U.S. Customs and Border Protection saying how much he owes in tariffs.

"A surprising number of people that I talk to — you know, smart, intelligent, well-read people — think that somehow China is paying the tariffs," Digre says.

"He wants to make it much more than I want to make it," Trump said. "I'm not anxious to make it. We're taking in hundreds of billions of dollars in tariffs."

Has The Trade War Taken A Bite Out Of China's Economy? Yes — But It's Complicated

The actual tariff bill is tens of billions of dollars, not hundreds of billions. And for China to absorb that cost, researchers at the Federal Reserve Bank of New York said last week that Chinese suppliers would have to cut their prices by about 20%. So far, the price of Chinese imports has fallen just 2%.

Americans are paying the rest.

"This is a tax that is not on foreigners. This is a tax on our own people," Rep. Jim Cooper, D-Tenn., complained at a recent congressional briefing. "This is a tax unilaterally imposed by the executive branch."

The trade war has contributed to a slowdown in manufacturing in recent months. U.S. factory activity has declined for four consecutive months.

At his speaker factory in Minnesota, Digre says the higher cost of components is only part of the problem.

"A tweet could come out this afternoon that could dramatically change a tariff rate," he said.

Uncertainty over tariffs and other trade policy has left businesspeople wary of spending money in recent months. Business investment fell at a 2.7% rate in the third quarter. Digre says the longer the tariffs remain in place, the more that decisions and investments are postponed.

China Falls Out Of Fashion For Some U.S. Brands

"That's, I think, one of the drags that American businesses are feeling right now," Digre says. "None of us know what it's going to look like in a year, in two years, even two weeks."

This week, Digre is traveling to the Philippines to look for alternative components he could buy without having to pay a tariff. It's a costly and time-consuming process.

"We're trying to keep building speakers here in the U.S., but there's only a couple of us left in the country to do it," Digre says. "And if these tariffs go on a lot longer, I don't know if there will be anybody left in this country to do it."

Ultimately, Digre says, he might have to move his whole factory overseas — exactly the opposite of what the president said he wanted when he started this trade war.