Accessibility links
Schiff On Impeachment: 'Uncontested Facts' Show Trump Solicited Bribe The House intelligence chairman told NPR that President Trump should also be charged with obstruction: "It is difficult to imagine a more ironclad case of obstruction of Congress than this one." 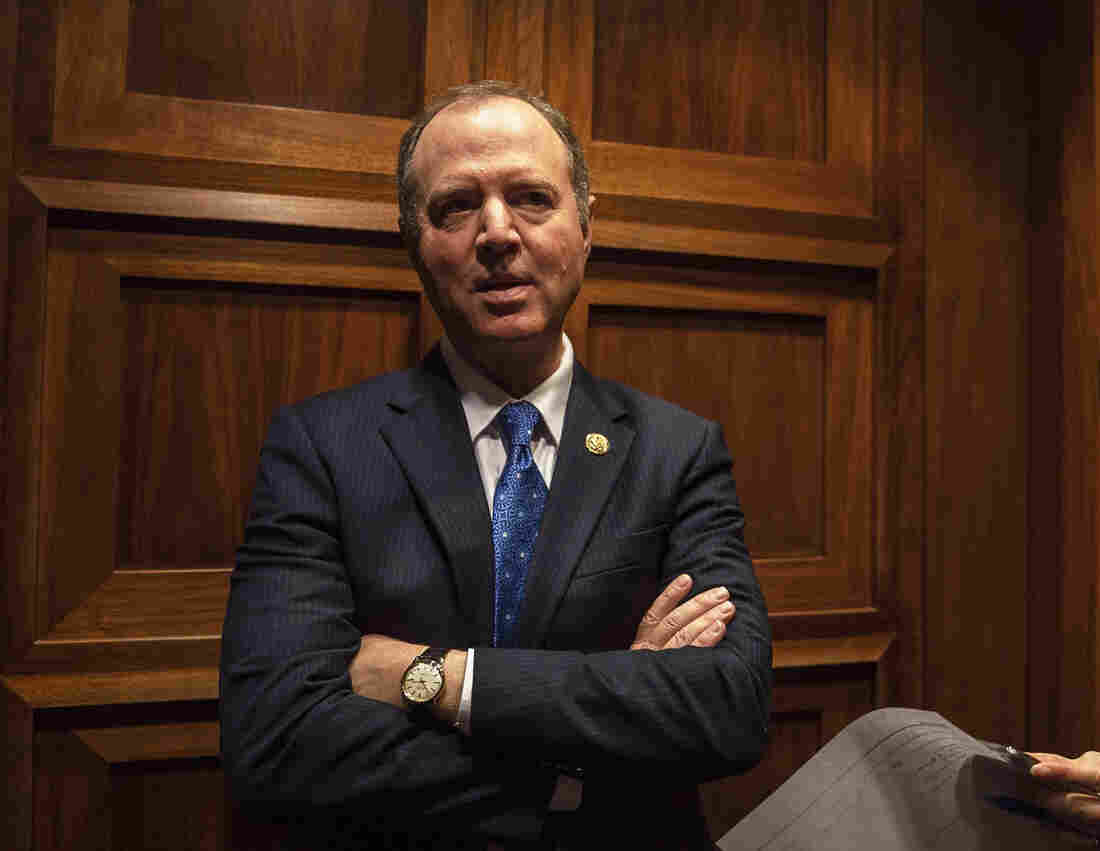 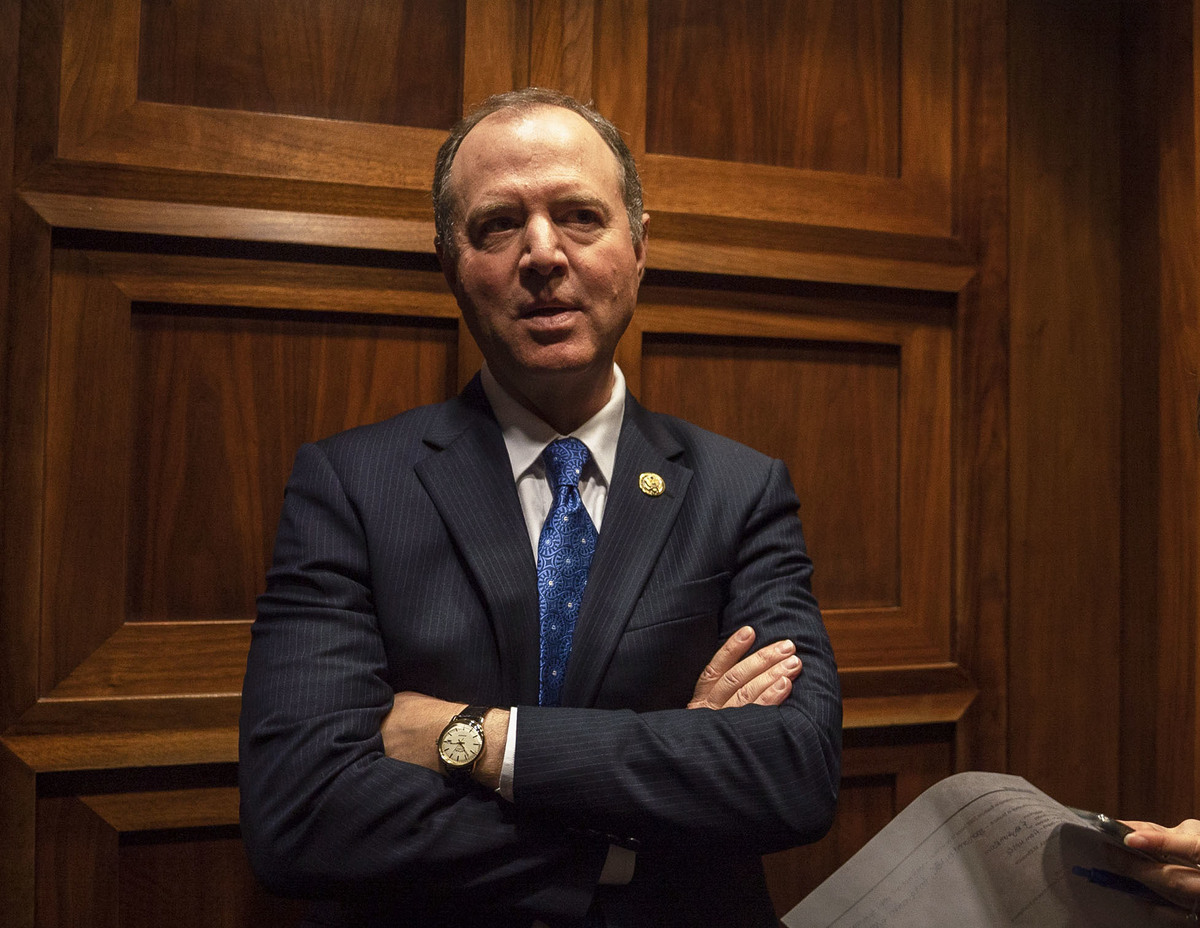 Rep. Adam Schiff, the lead investigator in the impeachment inquiry of President Trump, says the House Intelligence Committee's report "shows abundant evidence" that Trump used the power of his office to "condition official acts" in exchange for political favors.

In other words, the California Democrat says Trump met a threshold set forth in the Constitution that says a president can be impeached and removed from office for committing treason, bribery or other high crimes and misdemeanors.

"I don't think there's any question that the uncontested facts show this president solicited a bribe," Schiff told NPR's Steve Inskeep in an interview in the congressman's office on Capitol Hill Tuesday.

Schiff's comments come as House Democrats have mostly wrapped up the investigation of the president and are moving expeditiously toward a possible impeachment vote that could come ahead of Christmas.

"Bribery ... most importantly in terms of what the founders had in mind, that is conditioning an official act for something of value," Schiff said, adding, "I think this certainly meets that definition."

The interview also comes as Democrats on the House Intelligence Committee, which Schiff chairs, released a report laying out their case for drafting articles of impeachment. That report also says Trump committed "an unprecedented campaign of obstruction" in the impeachment inquiry, charges that Schiff calls "very serious."

"It is difficult to imagine a more ironclad case of obstruction of Congress than this one, where the president instructed all of his departments to refuse lawful subpoenas, not turn over a single document," Schiff says.

He added that if Republicans fail to act, "they must be willing to accept that fact that when there's a Democratic president that they believe is engaged in any presidential misconduct, they will be powerless to find out," because that future president can point to the Trump administration as precedent.

Central to Democrats' argument for impeachment is the allegation that Trump engaged in presidential misconduct when he tried to get Ukrainian President Volodymyr Zelenskiy to open investigations that were politically beneficial to Trump.

Democrats say that in exchange for investigations, which included the family of political rival and former Vice President Joe Biden, the Trump administration would release roughly $400 million in military assistance and grant Zelenskiy an Oval Office meeting with Trump, which officials in Ukraine desperately wanted.

Republicans on the committee argue the Democrats failed to produce any evidence during the impeachment inquiry that proves what Trump did was an impeachable offense.

In their own prebuttal report released Monday, House GOP members accuse Democrats of "trying to impeach a duly elected President based on the accusations and assumptions of unelected bureaucrats who disagreed with President Trump's policy initiatives and processes."

A number of polls, including one from NPR last month, show about half of Americans approve of the impeachment inquiry (50% support compared with 43% who do not). But Americans appear to be split evenly on whether they support Trump being impeached and removed from office — 45% approve to 44% oppose.

Inskeep asked Schiff whether, given that public opinion on impeachment is changing very little and that Trump is unlikely to ultimately be convicted and removed from office by the Republican-controlled Senate, he would be in favor of a less severe outcome than impeachment.

"Would censuring the president — voting to criticize him without trying to remove him from office — be something that would be more in line with public opinion?" Inskeep asked.

Schiff quickly knocked down the idea.

"I'm not a fan of the idea of censure," Schiff says.

Schiff was pushed to offer his thoughts on extending possible articles of impeachment beyond the Ukraine affair to include, for example, special counsel Robert Mueller's investigation into Russian interference in the 2016 election.

"I honestly do not want to think beyond the work we're doing at the moment and the decision that we have ahead of us," Schiff said. "But I will say this: Even as we transmit this report to the Judiciary Committee, we continue to learn on a daily basis of new facts incriminating the president and that add further context to this scheme."

Schiff pointed to reporting from the New York Times on Tuesday that indicates top officials in Ukraine first learned the U.S. was freezing military aid in July. The chairman added, "That is consistent with testimony we've had, but is further corroboration that, yes, Ukraine understood the leverage the president was using."

Inskeep also pressed Schiff on why after weeks of both public and closed-door testimony he has apparently not been able to gain Republican support for the impeachment process. For example, Texas Rep. Will Hurd, a moderate who is not seeking reelection, has said Trump's conduct was "inappropriate" but not impeachable.

Schiff replied by suggesting Hurd's response has to do with his reported ambitions to seek higher office and a "tremendous fear of antagonizing the Trump base."

"Well, in the case of Will Hurd, he's also said he wants to run for president. And I think that's really all you need to know about where he's coming from," Schiff said.

"Sadly, I think that is guiding the thinking of many of my colleagues in the GOP when I think what they really need to do is think about their oath and their duty to the Constitution. Otherwise, why are they even here, if, at a time when our democracy is deeply at risk, they're not willing to do what's necessary to protect it?"

The impeachment process now moves to the House Judiciary Committee, which is the panel that will decide whether to draft articles of impeachment that lawmakers would then vote on.

On Wednesday, that panel is scheduled to hear from four legal scholars who will share with lawmakers conditions for impeaching a president. Democrats have called Noah Feldman, a Harvard Law professor; Michael Gerhardt, a law professor at the University of North Carolina; and Pamela Karlan, who teaches law at Stanford.

Republicans have invited Jonathan Turley, a George Washington University law professor, who has written extensively about the impeachment process, including op-ed columns arguing that Democrats moved too quickly to investigate Trump and the Ukraine controversy.