Accessibility links
Burning Biomass Is A Complicated Climate Calculation In the search for alternatives to coal and gas, some European countries have turned to a very old fuel. They're importing wood from the United States. Some environmentalists say it makes no sense. 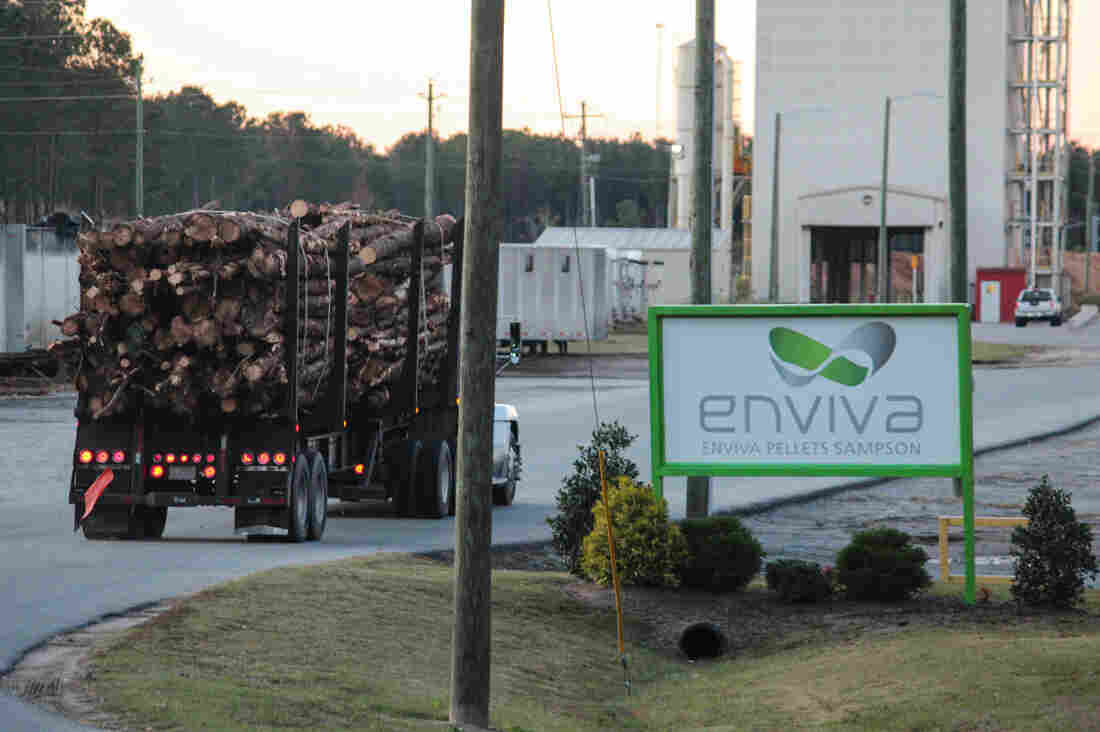 A load of wood enters a wood pellet plant operated by Enviva Partners in Sampson County, N.C. Enviva is one of the largest producers of wood pellets in the U.S. Dan Charles/NPR hide caption 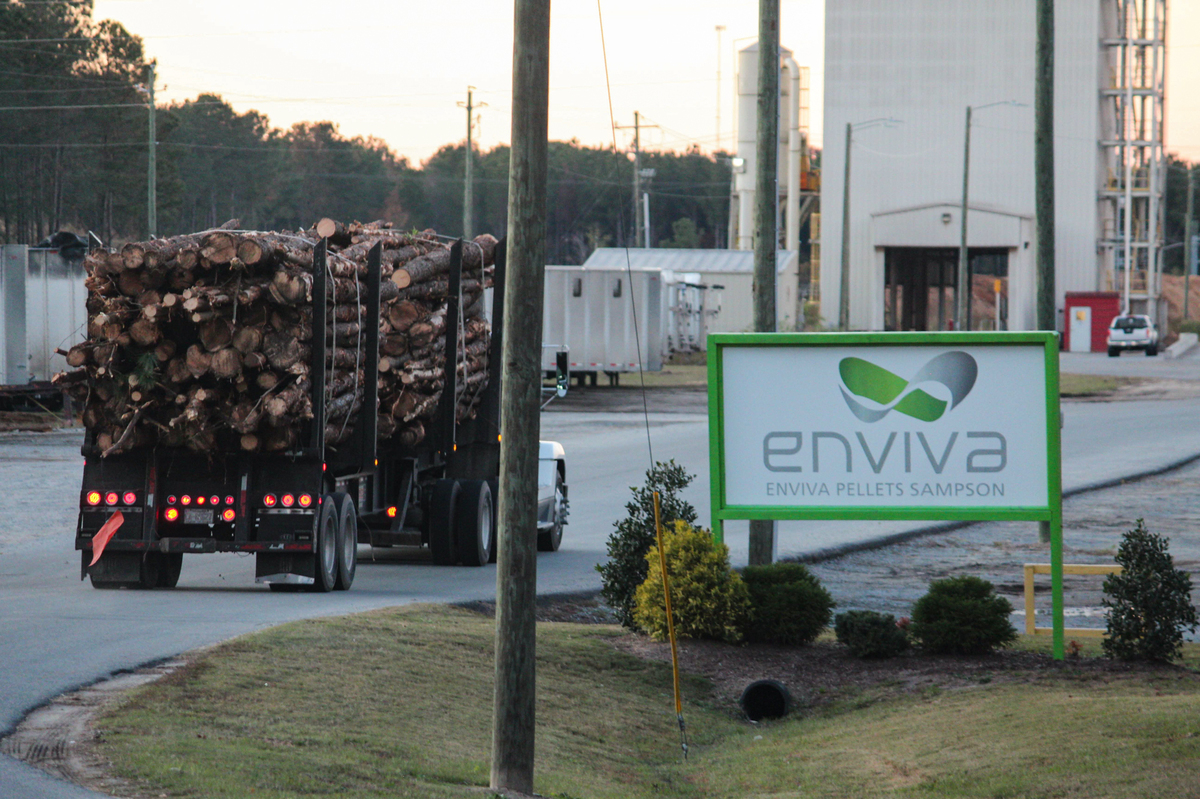 A load of wood enters a wood pellet plant operated by Enviva Partners in Sampson County, N.C. Enviva is one of the largest producers of wood pellets in the U.S.

On a soggy field in eastern North Carolina, Jason Tew and his crew of loggers are cutting trees and sorting logs into piles based on their size and the type of wood. There's a lot of pine, but also hardwoods: poplar, sweet gum, elm and oak. Some piles will go for making plywood; some will become absorbent fiber in baby diapers.

The least valuable pile is full of small hardwood tree limbs. "It's basically trash," Tew says. "We would have normally hauled that back in the woods and just left it."

In the last few years, though, new buyers for that wood have appeared. These "pellet mills" take the wood, crush it, and press it into little pellets made for burning. They've been expanding rapidly across the southeastern United States, and they're provoking heated debate over what deserves to be called "renewable fuel."

This industry relies on government subsidies, based on the idea that wood pellets are a tool in the fight against climate change. Some European governments are offering financial incentives to burn these pellets instead of, say coal. As a result, about seven million tons of wood pellets were shipped to Europe in 2018 as fuel for power plants, and these exports are growing. 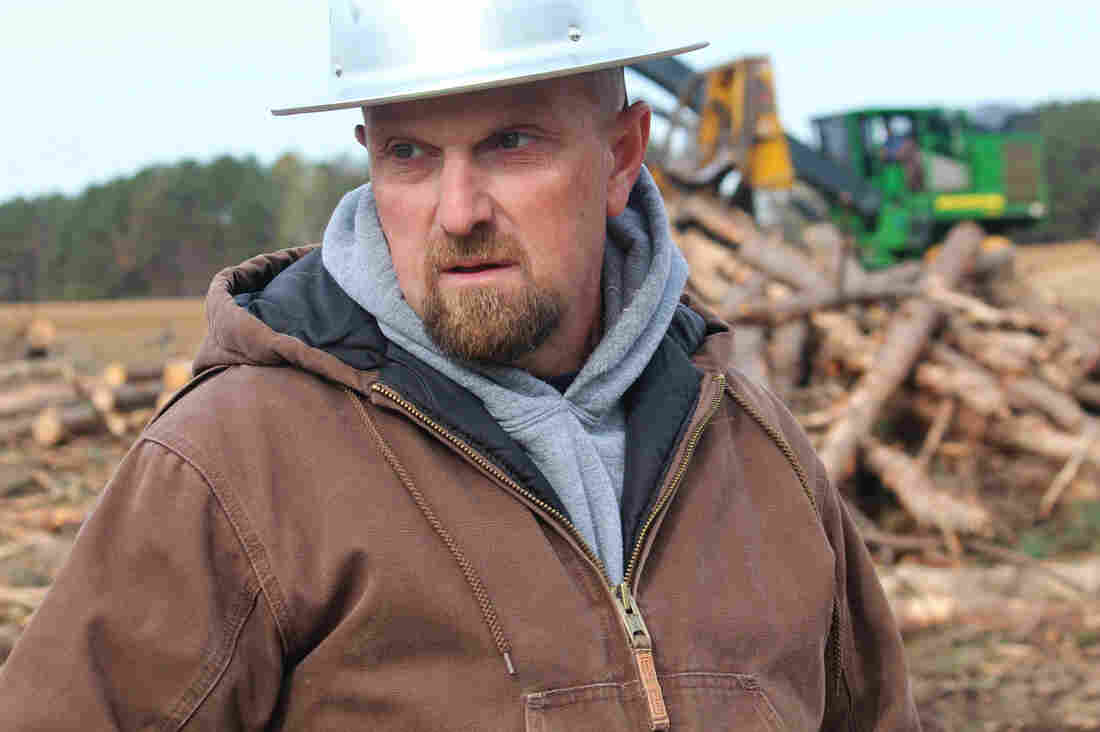 Jason Tew is a logger in eastern North Carolina. "The landowner is getting some value [from wood pellets], we're getting some production, it's just an all-round good deal," he says. Dan Charles/NPR hide caption 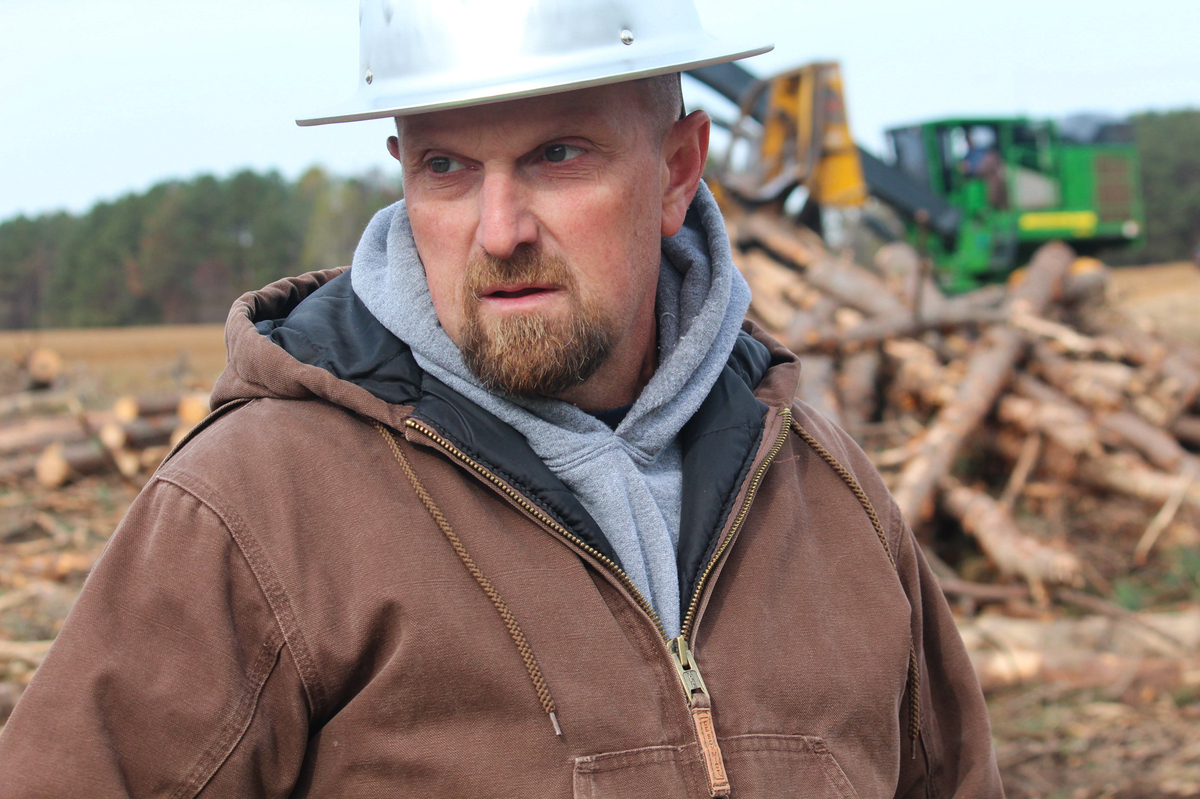 Jason Tew is a logger in eastern North Carolina. "The landowner is getting some value [from wood pellets], we're getting some production, it's just an all-round good deal," he says.

Burning wood, also called biomass, releases lots of carbon dioxide, the greenhouse gas. Supporters of biomass as an energy source, though, argue that it's a renewable resource. As the forests grow back, they'll recapture that carbon dioxide from the air and store it in their branches and roots. As a result, the EU considers it "renewable," just like wind or solar energy.

"The European Union literally just passed something known as the Renewal Energy Directive II, and sustainable biomass was unequivocally included as part of what can meet renewable energy goals," Ginther says.

Environmental groups, though, are challenging that decision in court. They argue that calling large-scale wood burning carbon-neutral is simply bad math.

To explain why, Adam Colette, from the group Dogwood Alliance, takes me to a patch of land near the town of Williamston, North Carolina. It's covered with bushes and small saplings that are perhaps ten feet tall. "In the South we call it a briar patch," Collette says. "And yet on paper, this is a forest."

Four years ago, this really was a forest, with big trees. Then it was logged. Some of the wood went to make pellets. 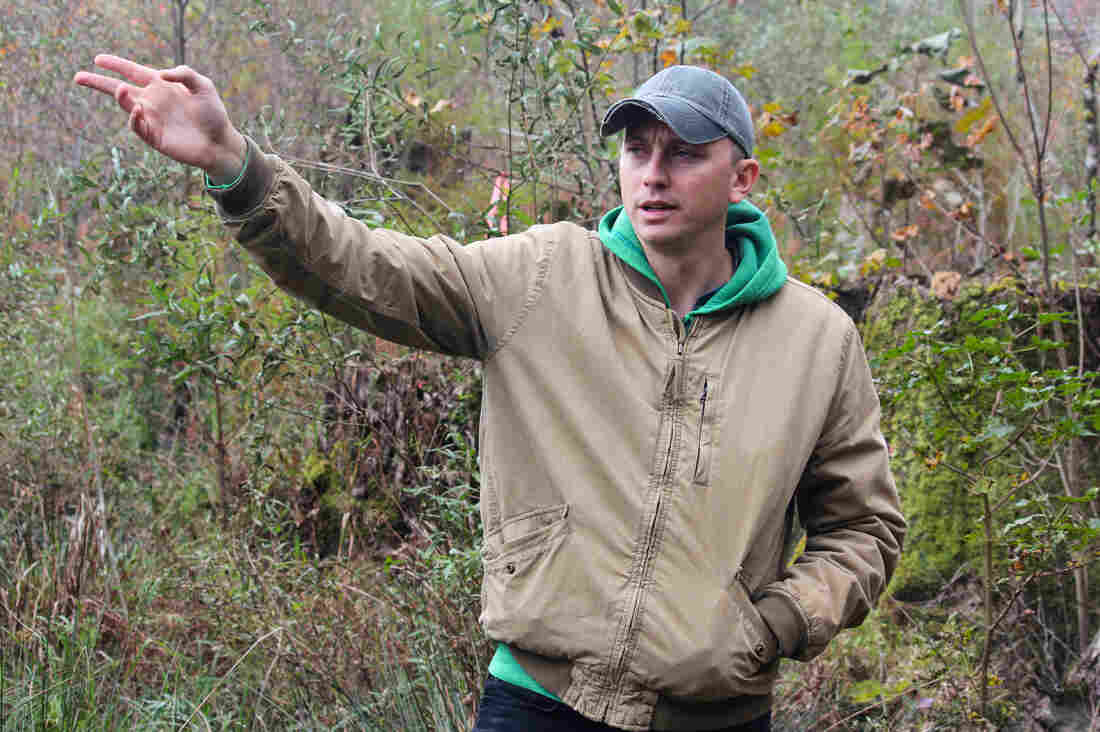 Adam Colette works for Dogwood Alliance, which is devoted to protecting forests in the South. Dan Charles/NPR hide caption 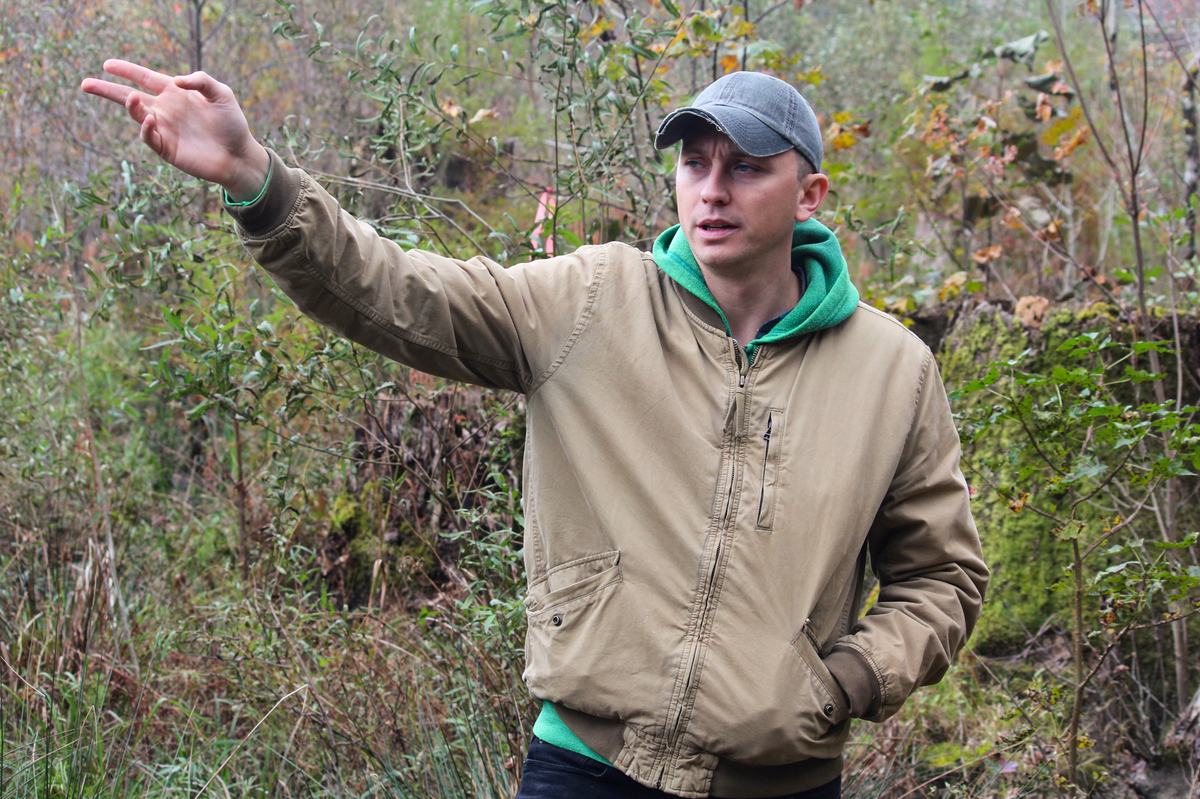 Adam Colette works for Dogwood Alliance, which is devoted to protecting forests in the South.

Colette goes through his own accounting of the greenhouse emissions that resulted. First, before they were cut, those big trees were capturing tons of carbon dioxide from the air every year. That "carbon sequestration" ended when the trees were cut, and won't return to its previous level for many years.

Second, much of the carbon that had previously been stored in this forest was released as the wood pellets were burned and as tree roots decompose. In fact, Colette says, the soil here is still probably releasing carbon four years after the forest was cleared.

But you won't see any of this in the official calculations of greenhouse emissions. "None of it's ever been counted ... either in the U.S. or in Europe," he says. That because this land is still considered a forest, and because the trees eventually will grow back, recapturing the lost carbon — even though that could take a century.

Seth Ginther, from the U.S. Industrial Pellet Association, says that his industry should not be blamed for any of these carbon emissions because wood pellets are not the reason that forests are cleared.

"These are lands that are being harvested for sawtimber, for housing, for paper and for other things," he says. "What we're taking is the byproduct of that."

Independent forestry experts, however, say that's not completely true. Their studies show that the wood pellet industry is competing for some of the same wood that might go for making paper or diapers. And it is pushing up prices for that wood.

Adam Colette, from Dogwood Alliance, thinks that this is persuading some small landowners to harvest their trees. "You have more knocks on those doors, more phone calls saying, 'I'll give you x dollars for your trees,'" he says.

Colette wants government policies to deliver a different message, encouraging landowners to maintain their woodlands or expand them. "Our forest are young. They're degraded. And what that means is, the potential of forests in the U.S. South to suck carbon out of the atmosphere is enormous," he says.

These forests are some of the most important climate solutions we have, he says — if they keep growing.