Accessibility links
Judiciary Committee Takes Up Impeachment In Hearing With Legal Scholars A panel of four constitutional law scholars put the allegations against Trump in a historical and legal context. Three of the professors supported impeachment. One opposed it. 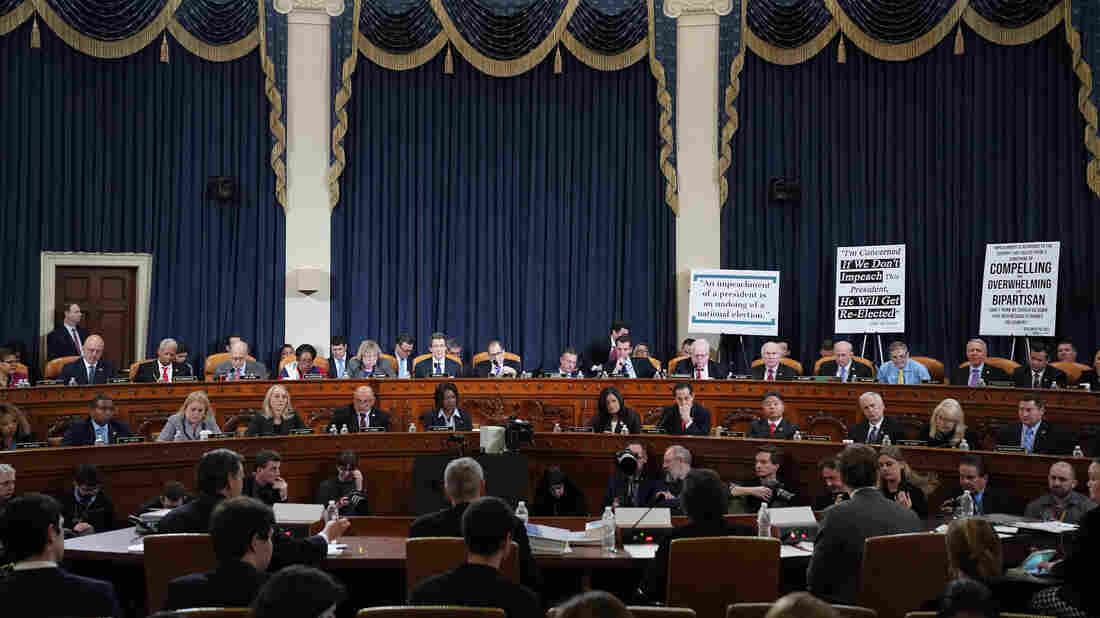 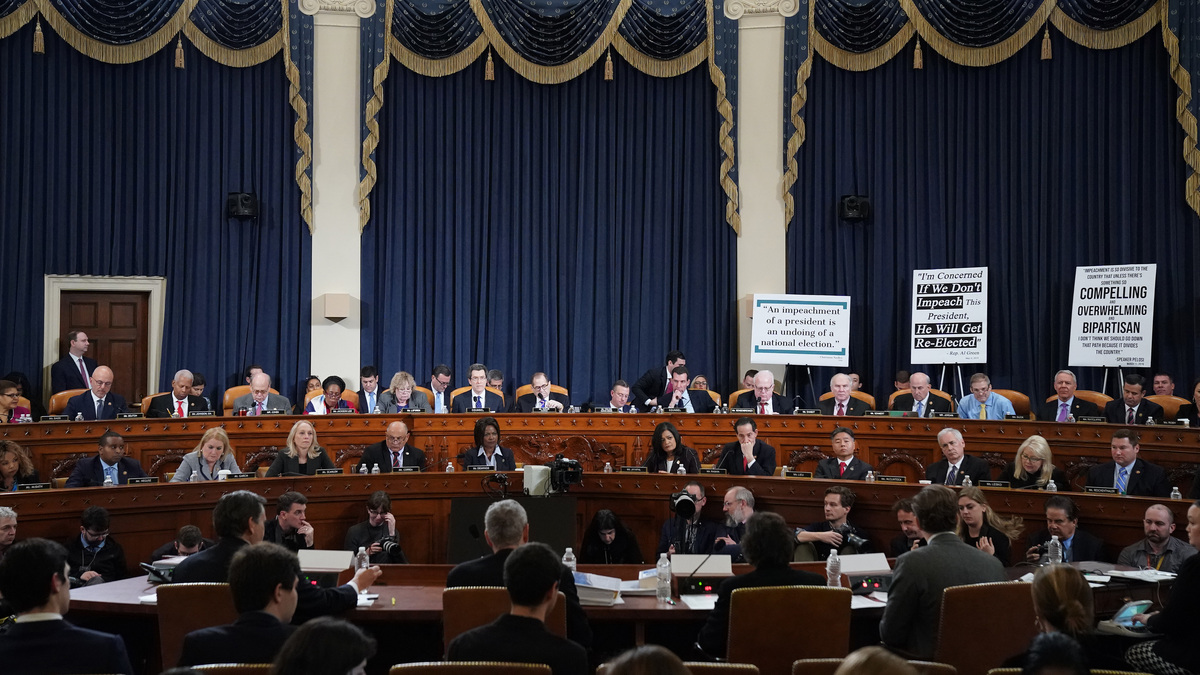 Wednesday marked the beginning of a new phase in House Democrats' efforts to impeach President Trump.

What members called the fact-finding portion of the process is complete, so the House Judiciary Committee began assessing what action to take and what articles of impeachment to draft, if it decides to draft them.

Three professors of law told the Judiciary Committee that they worried deeply about Trump's actions in the Ukraine affair — and thought they appeared to justify the power of impeachment as enshrined in the Constitution by its framers.

A fourth professor — who said he personally opposed Trump — differed, saying the factual case so far developed against Trump would cheapen impeachment and create a dangerous precedent both for Congress and for the executive branch.

Chairman Jerry Nadler, D-N.Y., invited the witnesses because he said the members of the Judiciary Committee needed to understand the historical and legal context for impeachment in deciding how to proceed.

The House Intelligence Committee released its final report about the Ukraine affair and voted to adopt it on Tuesday. Now Nadler will attempt to carry the ball forward. 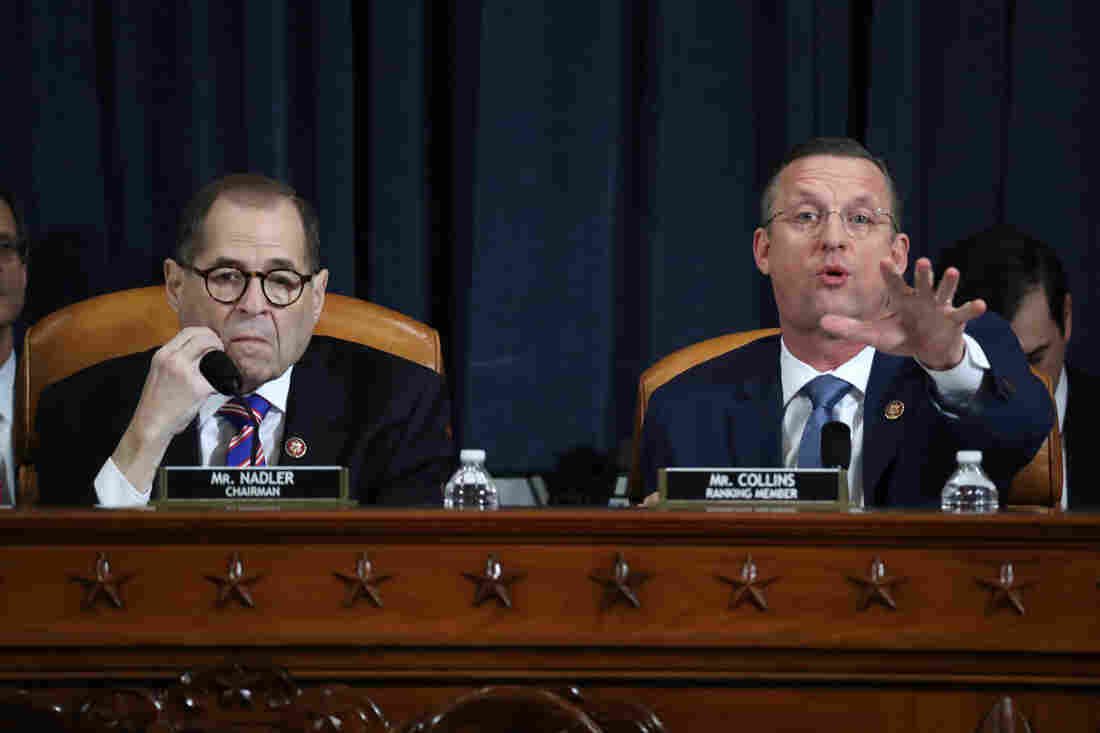 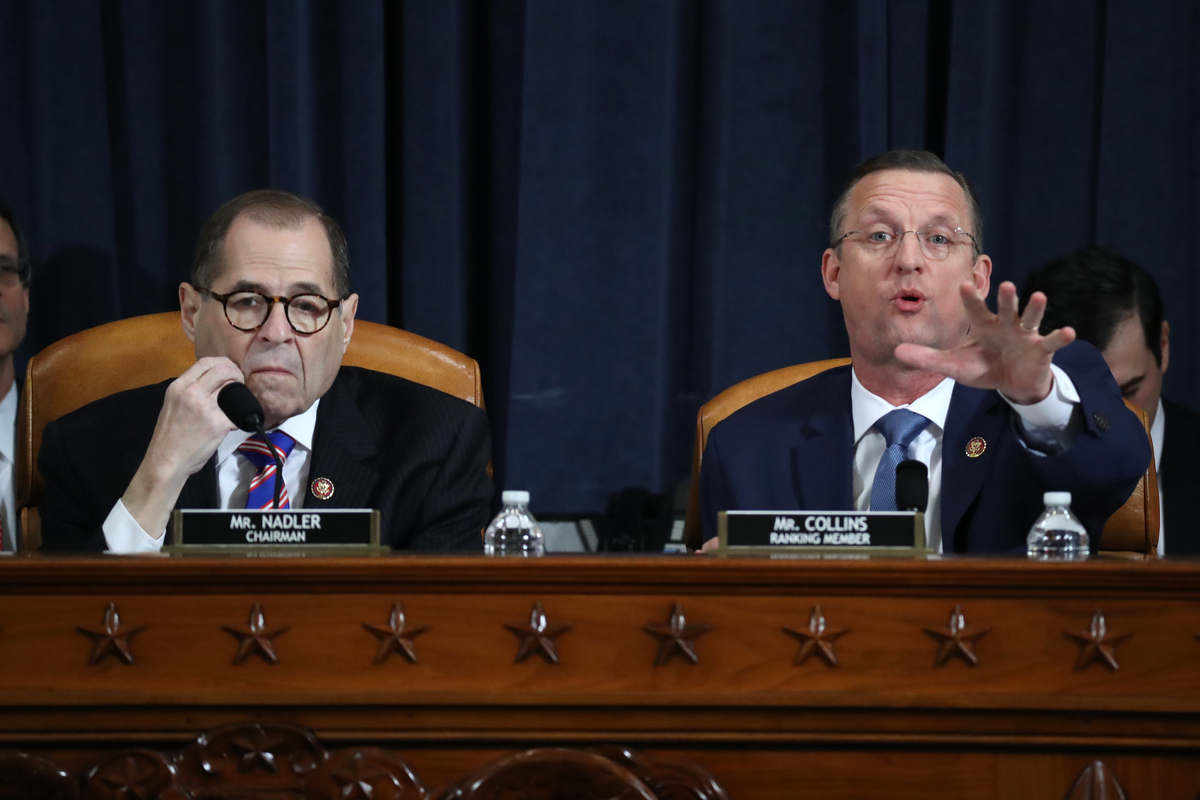 Nadler, his compatriots and their leader, House Speaker Nancy Pelosi, D-Calif., have said that impeachment isn't a foregone conclusion and that it depends on the outcome of their process.

Republicans were dubious, arguing that Democrats had decided to impeach first and then sought to find find a case that fit. 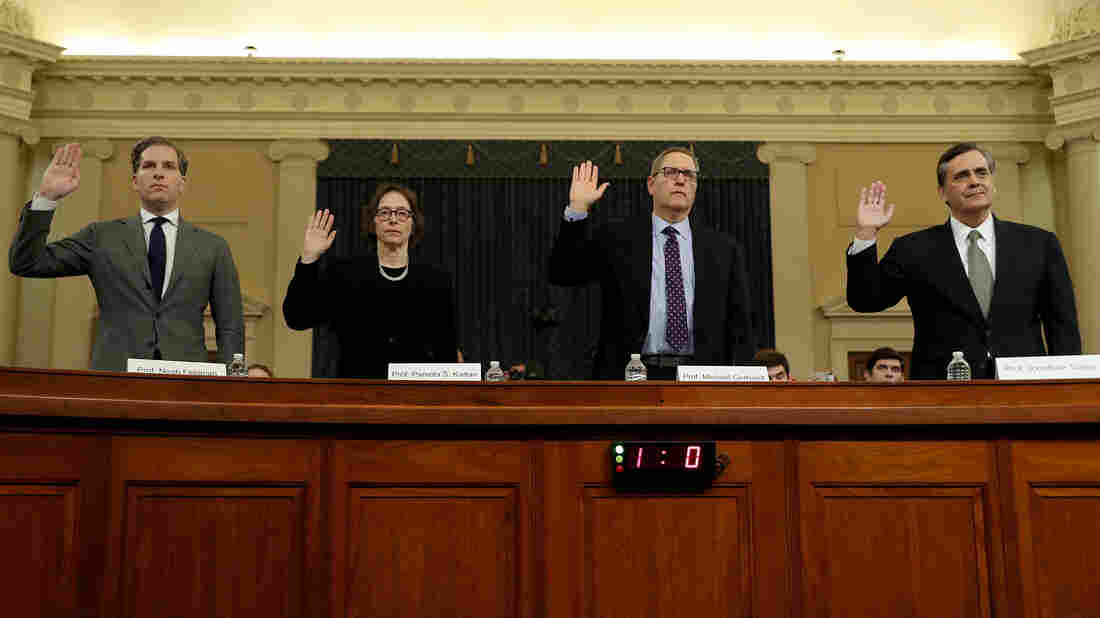 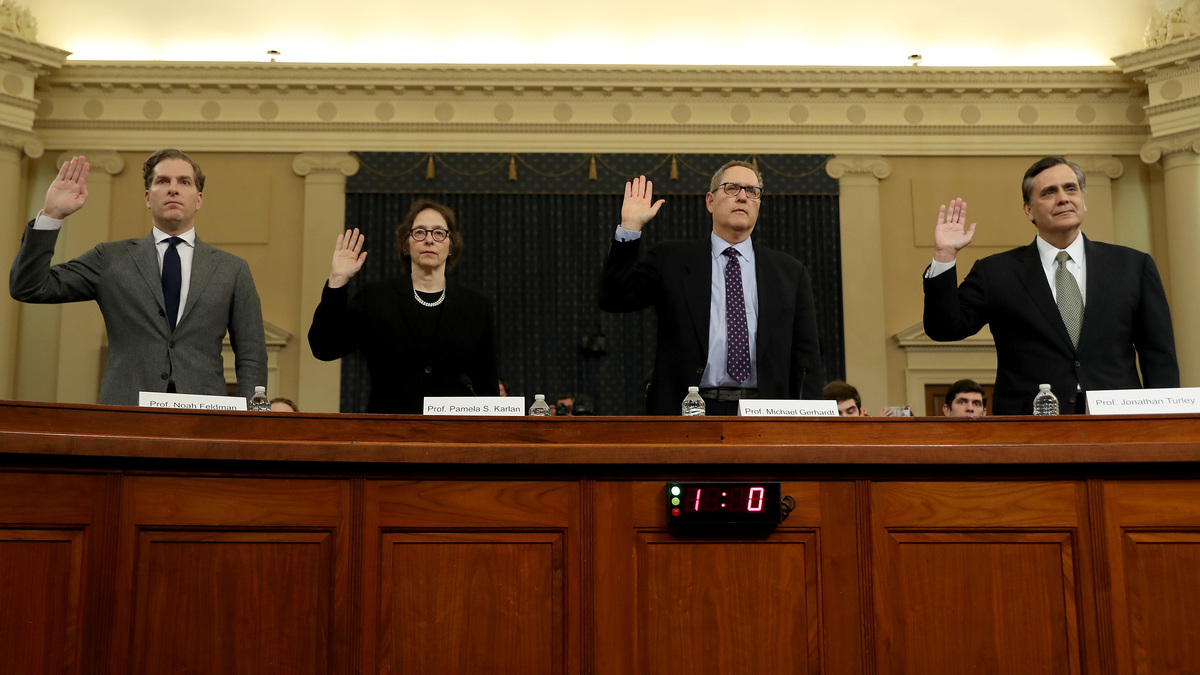 The witnesses detailed the historical context of the Constitutional Convention and vision of George Washington, Alexander Hamilton and other early U.S. luminaries as it pertained to their discussions about including impeachment in the Constitution.

Feldman, Karlan and Gerhardt agreed that the Constitution's "high crimes and misdemeanors" framework fits today in connection with Trump's actions in the Ukraine affair.

Karlan said she had reviewed the material collected by Congress and was convinced about how far outside the bounds she said Trump has strayed.

"Everything I read on those occasions tells me that when President Trump invited — indeed demanded — foreign involvement in our upcoming election, he struck at the very heart of what makes this a republic to which we pledge allegiance," she said.

The case is so clear, the first three professors said, that lawmakers can't not continue to pursue impeachment.

"If Congress fails to impeach here, then the impeachment process has lost all meaning and, along with that, our Constitution's carefully crafted safeguards against the establishment of a king on American soil," Gerhardt warned.

Turley, however, said the case remains incomplete with evidence not yet obtained and witnesses not yet deposed. He also rejected the idea that Trump had obstructed Congress by asking courts to bar witness testimony or documents.

The president has that right and the courts have that role, Turley argued, and if Congress resorts to impeachment, it will be the one to have abused its power under the Constitution, he said — not the president.

Turley also invoked the example of a few radical Republicans in the case of President Andrew Johnson — the first chief executive who was impeached — who did not vote to remove the president because they felt the case was weak, even though their compatriots were exhorting them to do so.

"To impeach a president on this record would expose every future president to the same type of inchoate impeachment," Turley said. "Principle often takes us to a place where we would prefer not to be."

Republicans step up their defenses

Collins noted that Nadler had convened Wednesday's hearing in a different room with different details for the TV coverage — but had not advanced the facts in any way.

"What's not new is this is the same sad story," he said.

Impeachment, Collins said, is a "railroad job" perpetuated by Democrats who loathe Trump and are fearful he might be reelected next year.

The administration didn't send an attorney to take part in Wednesday's hearing, and Trump's campaign said on Tuesday that Nadler's witnesses are "just left-wing liberals who have been talking about impeachment since President Trump took office."

The White House blasted Karlan after she said that Trump might be able to name his son Barron but Trump is not a king who could create a nobleman such as a baron.

A minor child deserves privacy and should be kept out of politics. Pamela Karlan, you should be ashamed of your very angry and obviously biased public pandering, and using a child to do it.

House rules give Nadler and the Judiciary Committee the responsibility of assessing what, if any, articles of impeachment to draft against Trump.

Democrats could then use their majority on the panel to advance them to the floor of the full House, where, if a sufficient number of Democrats lent their support, Trump could become just the third sitting president in history to be impeached.

That is the equivalent of an indictment by a grand jury — a statement by the House that it considers there to be enough evidence for Trump to stand trial in the Senate.

Republicans, led by Trump ally and Majority Leader Mitch McConnell, R-Ky., control the Senate and are expected to acquit the president, permitting him to retain his office.

Nadler and Democrats can see what's ahead for this process the same as anyone. But impeachment is worth doing, they have argued, because it sends a message about what Congress will not tolerate and it forces senators to go on the record defending Trump's actions in the Ukraine affair.

Impeachment is a quasi-legal but mostly political process. Pelosi, Nadler and their compatriots are balancing this as they decide the kind of case to make against Trump.

Should it be narrowly constructed around the facts of the House Ukraine investigation? Or should it be a broader case that reflects more of what Democrats argue has been improper behavior by Trump?

Given that House Democrats likely cannot remove Trump, the question they must ask themselves is what will do him the most political damage and themselves the least damage, mindful of the election next year.

Pelosi and Nadler may have answered these questions already for themselves, but the public aspect of that process, at least, is what got underway on Wednesday.

The hearing also marks Nadler's return to the spotlight after months on center stage for the House Intelligence Committee. Nadler was an early convert and insisted earlier this year that his committee was pursuing an impeachment case even before the imprimatur given by the vote of most other Democrats in November.

In that earlier phase, Nadler sought to exploit some of the findings of former Justice Department special counsel Robert Mueller, including those that Democrats have said amount to obstruction of justice by Trump.

Nadler returned to Mueller's findings on Wednesday in his opening statement.

Other members of Congress also broached the idea of incorporating Mueller material into a putative impeachment case. A few Democrats appeared intrigued, but Republicans — and Turley — also highlighted what they called the legal weakness involved with doing so.

The Mueller thread also has involved litigation by the House against Trump and the Justice Department involving evidence from Mueller and other matters. Some of those cases are ongoing.

The discussion on Wednesday may mean the question isn't settled as to whether Nadler might favor a broad indictment of Trump that takes elements from the Russia investigation — or focusing closely on Schiff's report.