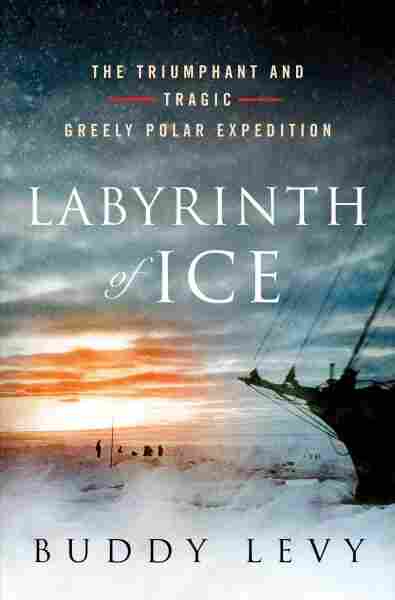 The story of the Lady Franklin Bay Expedition, which would eventually be known as the Greely Expedition, is important in terms of the areas it helped map, the wealth of scientific observations made, and the fact that the group reached the Farthest North — a record that had belonged to the British for three centuries.

However, the reason most people know about the expedition is because it became one of the most dangerous adventures in polar discovery and, by the time it was over, it had become an amazing narrative of strength, fear, danger, and survival that rivaled any other before it. In Labyrinth of Ice: The Triumphant and Tragic Greely Polar Expedition, author Buddy Levy offers an engaging, superbly written, and meticulously researched chronicle of the Greely expedition that proves it is one of the most engaging adventure narratives ever.

In July 1881, Lt. A.W. Greely put together a crew of 24 scientists and explorers and set out to reach areas of the north that had not been traversed before. The expedition carried equipment to conduct scientific research on the weather and planned to catalog the flora and fauna of the place. However, Greely's main goal was to achieve Farthest North and claim that record for the United States.

While they achieved almost everything they set out to accomplish, Greely and his men also confronted every possible challenge. The atrocious weather battered them and they had to cope with months of total darkness, isolation, bears, constant sub-zero temperatures, and even wolf attacks. In May 1882, the expedition broke the 300-year-old record of Farthest North and the men returned to camp. There, they continued to research as they waited for the resupply ship. It never came. Facing a second harsh winter without the supplies they needed, morale began to wane. When no ship came after that second winter, everything changed. What happened next, from desperation to the group leaving their camp and trying to make their way south amid hunger, insanity — and even threats of violence and cannibalism — is the stuff of legend.

Labyrinth of Ice is an outstanding true story of heroism, discovery, bravery, and survival. The Greely Expedition faced "attacks by wolves; hurricane-force winds; temperatures approaching 100º below zero; and near insanity brought on by the months of total darkness." However, they persevered. They pushed forward, driven by an unquenchable thirst for fame and, later, by an unstoppable desire to live. Levy masterfully retells their story using letters, journals, other books, and telegrams. With cinematic prose, great economy of language, and vivid descriptions, Levy places readers in the middle of the action and makes them see the snow, feel the hunger and the tension, and hear the cracking of the ice, which the men called "the Devil's symphony."

More than a nonfiction book about an expedition, Labyrinth of Ice reads like an outstanding script for an action movie. Levy's voice, knack for pacing, and the way he integrates the writing done by the men who were there add up to a narrative that is as gripping and full of danger as it is exciting and poetic:

"But in the waning light of early October, during which time Greely noted that 'the sun shines but little, and feebly,' they had their first encounters with wolves. A large band of nearly twenty — it was hard to count them in the low light against the dusky hillsides — appeared one evening very near the house. Their gaunt forms slunk nearby, moving like ghosts through the Arctic fog. Some of them, according to Greely, 'appeared to be as large as calves.' The pack came silently, then disappeared as one into the mist, the echoes of their distant howls the only trace left of them."

There are many adventure narratives in which place and the elements become important characters. In this book, they are two invincible villains that torture the men and constantly dangle them at the edge of sanity or death:

"The long night. The continuous darkness had driven some Arctic explorers to madness. Greely knew he must guard against that at all costs. He must keep the men busy to stave off boredom and depression and perhaps even insanity. Having never experienced an Arctic winter, Greely wrote: 'It is the unknown which awes and terrifies.'"

While Levy's prose is great and readers will easily envision animal attacks, arguments, and the sound of cracking ice, the photographs, taken by Sergeant George Rice, add a visual element that backs up every part of the narrative and show readers "the building of Fort Conger; the Proteus at anchor in Discovery Bay; the Eskimo with their dogs and sledges, as well as skinning seals and musk-oxen; the Eskimo relics Brainard had discovered," and much more.

Labyrinth of Ice is a riveting, engaging read packed with superhuman feats, incredible journeys, amazing discoveries, tension, heartbreak, and constant danger. It is also a true tale — and that makes it a book that demands to be read.