Accessibility links
'Secondhand' Author Adam Minter Tracks What Happens To Your Used Stuff "Your average thrift store in the United States only sells about one-third of the stuff that ends up on its shelves," Adam Minter says. His book explores what happens to the things that don't sell. 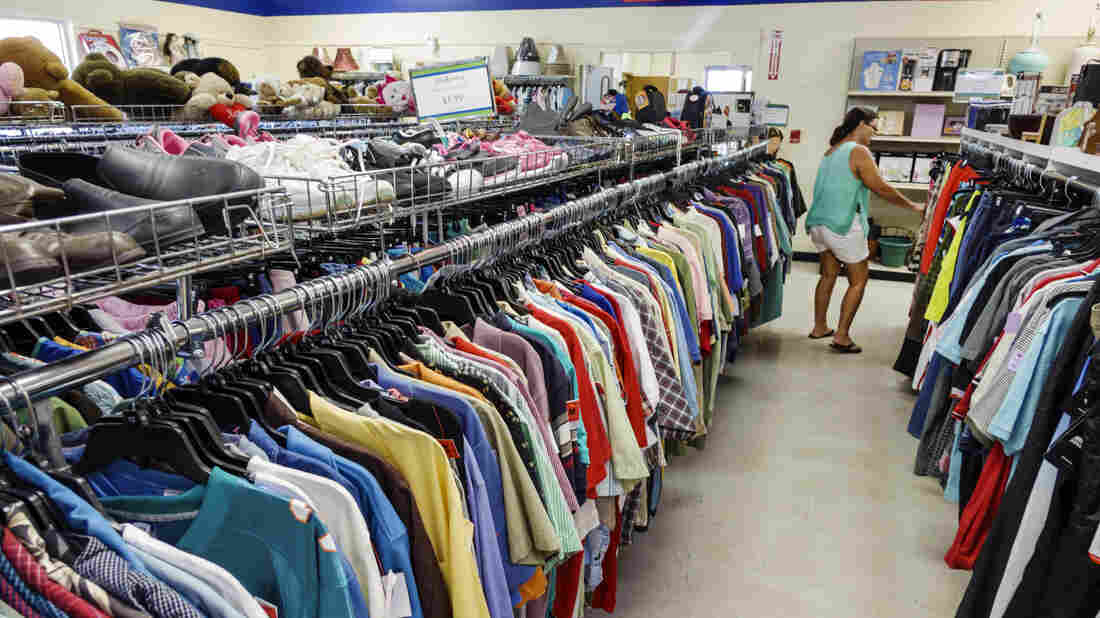 Author Adam Minter estimates that the average U.S. thrift store is able to sell only about one-third of its inventory. In his new book, Secondhand, he finds out what happens to the other two-thirds. Jeff Greenberg/Universal Images Group via Getty Images hide caption 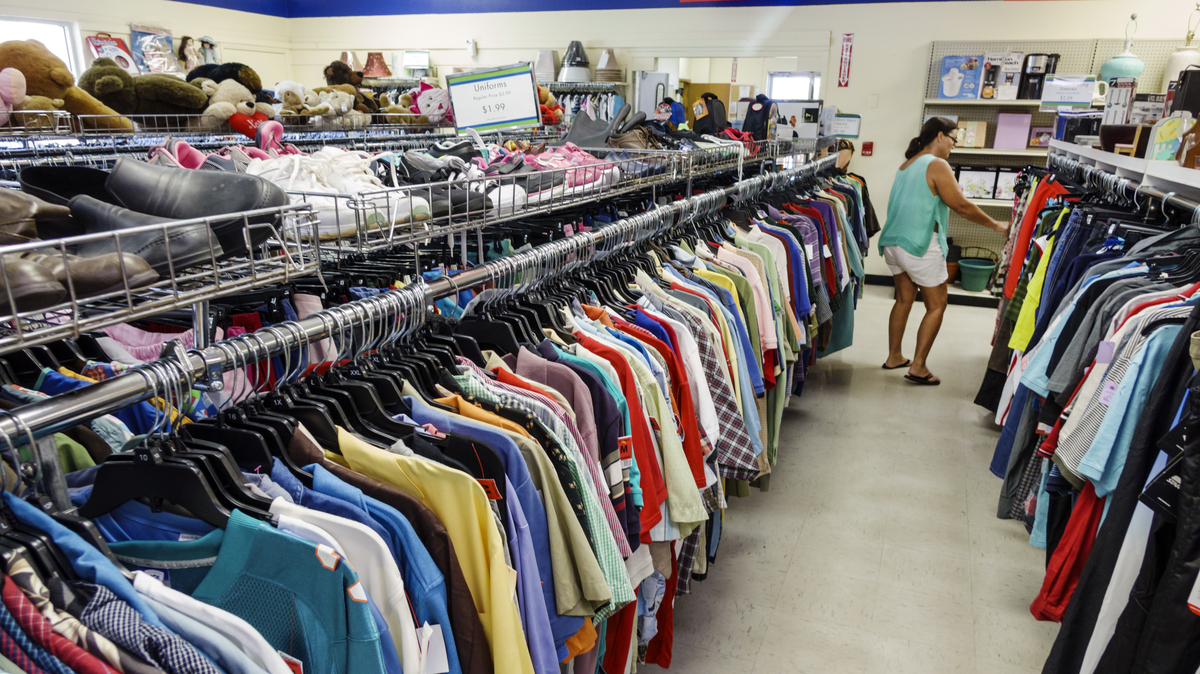 Author Adam Minter estimates that the average U.S. thrift store is able to sell only about one-third of its inventory. In his new book, Secondhand, he finds out what happens to the other two-thirds.

Author Adam Minter remembers two periods of grief after his mother died in 2015: the intense sadness of her death, followed by the challenge of sorting through what he calls "the material legacy of her life."

Over the course of a year, Minter and his sister worked through their mother's possessions until only her beloved china was left. Neither one of them wanted to take the china — but neither could bear to throw it out. Instead, they decided to donate it.

Waiting in the donation line at Goodwill, Minter began wondering what would happen to the dishes: "It occurred to me this is a very interesting subject," he says. "Nobody really knew what happened beyond the donation door at Goodwill."

Minter had spent nearly two decades reporting on the waste and recycling industries. Now he began looking into the market for secondhand goods, both domestically and in Africa and Asia.

"Your average thrift store in the United States only sells about one-third of the stuff that ends up on its shelves," he says. "The rest of the stuff ends up somewhere else."

What Happens To Your Used Stuff? 'Secondhand' Tells Of A Billion-Dollar Industry

Minter visited Goodwill donation centers in the U.S. and watched as employees engaged in a sophisticated sorting and pricing system. He noted that while designer clothes might be set aside as "boutique" items, other products — including heavy wooden furniture and outdated exercise equipment — were often destined for the dump.

"A 300-pound oak dining room table ... becomes a problem," he says. "You will see some of this very nice oak furniture, if it can't be sold, it will end up in the landfill."

Minter's new book, Secondhand, explores the afterlife of donated clothes and electronics. His previous book, Junkyard Planet, was about the recycling industry. 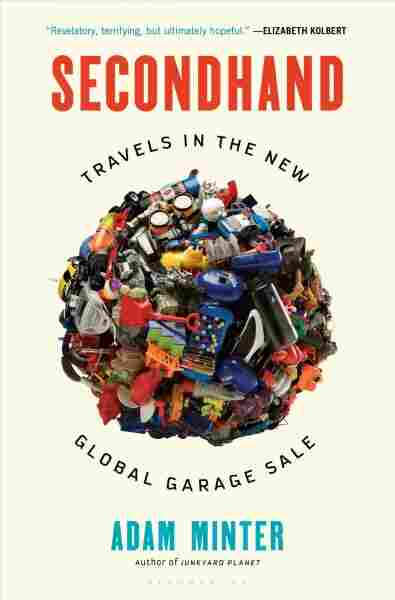 On the rise of "cleanup" companies, which help people sort through and dispose of their possessions

As populations age, and children move away from home, you have an increasingly elderly population in the United States, for example, that wants to downsize for whatever reason into retirement. ... And that means that they need to get rid of their stuff that they've accumulated for a lifetime.

This profession has existed for centuries, in a sense — there's always been scavengers going to people's homes as they leave them. But now it's taken on sort of a new tint. And what they do is they sort of counsel people on helping them get rid of the things, sometimes encourage them, sometimes nudge them, and then help them make the move. ...

The very best of the cleanup professionals that I spent time with, they kind of reminded me of therapists. Again, it was having to sit with somebody and explain to them, "You don't need this." And that person explaining to the cleanup professional, "This wedding china, when it was given to me 50, 60 years ago, I was going to keep it forever and now I'm downsizing. You're asking me to let go of this wedding china, which isn't just this material thing that I put in a cabinet and looks pretty, but it's really a part of my identity."

And what's so emotionally jarring ... [is] that you see people really taking apart their identities, because in contemporary America, [and] in Japan, where I spent a bunch of time, I mean, we increasingly sort of build up who we are on the basis of the things that we have owned and acquired over the years.

On how the proliferation of storage units affects the reuse industry

It's really troubling in some ways, because depending on where you are, people can actually pay more per square foot for a storage unit than they would for residential rental space. So we're actually paying more to store our stuff than we are to store ourselves.

So all that stuff that's filling up these storage units isn't necessarily what my grandmother would call "merchandise." It's stuff that's going to go in the donation door at a thrift store — and ultimately going to find its way into a dumpster or a recycling bin. It's not going to be reused.

On the declining quality of electronic goods

If you think back say, 20, 25 years ago, a television that was 10 years old was something that could be reused. It could be refurbished and reused. ... They were very heavy, but they were also very robust. But these days, you can go and you can buy yourself a flat-panel television at an electronics retailer. I saw it over the recent Black Friday period and you can buy that flat panel for $150. But in a sense, you get what you pay for. You get a cheap television that maybe will last three years.

When you go to storage units and see these flat-panel TVs sitting in them, somebody may have [thought], "I'm just going to store it here for a couple of years." By the time it's opened up and people say it's time to donate the stuff, that's not merchandise. That's something that's going to go to an electronics recycler. And that kind of phenomenon is increasing. The volume of stuff is increasing, but the volume of good stuff among the stuff, if you will, is declining.

On observing the sorting process at a Goodwill donation center

It's amazing the things that come through the door at Goodwill. I would literally follow it, walk with it to the sorting areas. It was really surprising to me. I didn't know what I was expecting, but I didn't expect the level of sophistication of sorting that you find at a Goodwill. ...

There'll be large carts full of clothing and they will go to sorters who, first of all, ... have almost like a flowchart. ... I think it's around 85 to 90 brands on there. And they will tell the sorters how to price those. But on top of that, they go through and they feel the fabric. Is it thin? Does it feel like something that's gonna fall apart after one to five washes? ...

And then you will go through there and you will find garments that simply don't even belong going to the rag-makers. ... That may be something that's just so badly soiled that you couldn't in good conscience send it to anybody, so it would go into the trash bin.

There's an objective side to it. But there's also sort of the subjective side that requires the sorters in these rooms — just talking about apparel — to use their subjective knowledge that they've acquired as they spend time with thousands and thousands of garments over periods of time to make that call.

A "life cycle assessment" is basically where somebody goes and looks at the full environmental impact of a product — say a smartphone — from manufacturing to disposal and looks at what the air pollution impacts are, the mining impacts, the carbon impacts. The one thing we do know is that the biggest impact of most products is the manufacturing side. So if you want to reduce the environmental impact of your consumption, the best way to do that is to not manufacture more stuff. In that sense, the best thing you can do is not buy more stuff.

If you want to reduce the environmental impact of your consumption, the best way to do that is to not manufacture more stuff. In that sense, the best thing you can do is not buy more stuff.

The longer that your product lasts, the longer that you use that smartphone, the less likely it is that you're going to be buying a new one. So the goal really should be to keep your stuff in use for as long as possible, whether it's by you or somebody in Ghana or somebody in Cambodia. So in that sense, it's a really good thing, because if somebody in Cambodia is using your phone, they're probably not buying a new cheap handset there.

On where goods go to die

They end up in the landfill or the incinerator. I mean, there is no green heaven, if you will. Everything wears out eventually and everything gets tossed out. ... That's the fate of stuff. That's the fate of our consumerist societies. If we spend our time thinking this is going to be used perpetually, forever, even the best-made garment, the most robust smartphone, we're deluding ourselves a bit. Eventually, everything does have to die. ... It's sort of the ultimate story of consumerism and it's the dark side. We can't really delude ourselves into thinking everything lasts forever.

Sam Briger and Seth Kelley produced and edited the audio of this interview. Bridget Bentz, Molly Seavy-Nesper and Beth Novey adapted it for the Web.