Accessibility links
All For One And One For Four: Turner Prize Finalists Decide To Split Honor The award is typically given to just one visual artist born or based in the U.K. But this year, its four politically committed finalists asked to make a "collective statement" — and got their wish.

All For One And One For Four: Turner Prize Finalists Decide To Split Honor

All For One And One For Four: Turner Prize Finalists Decide To Split Honor 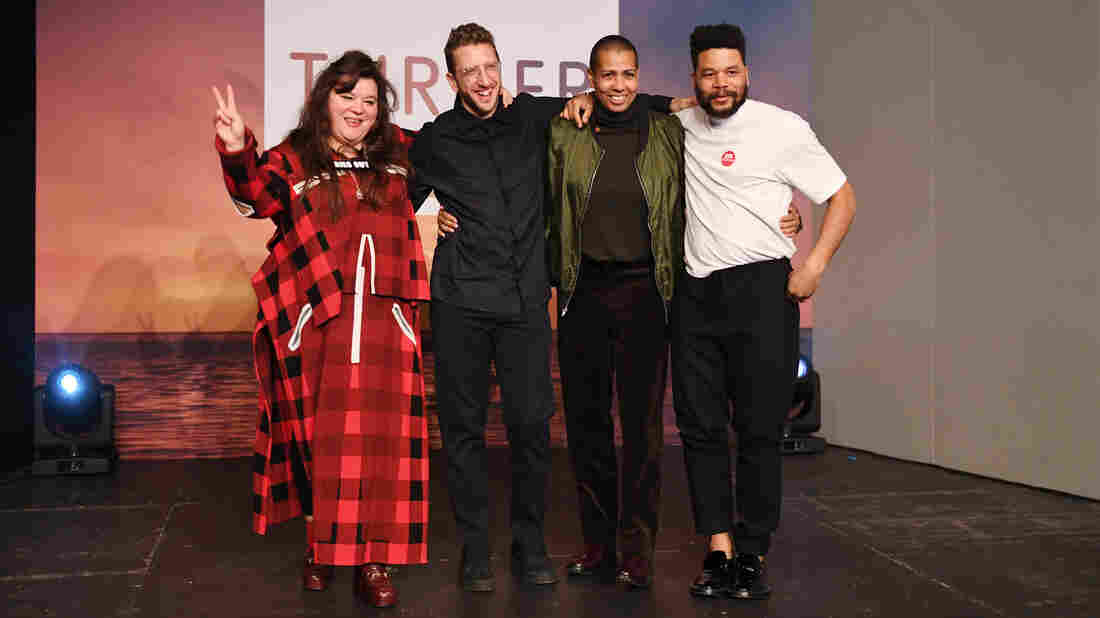 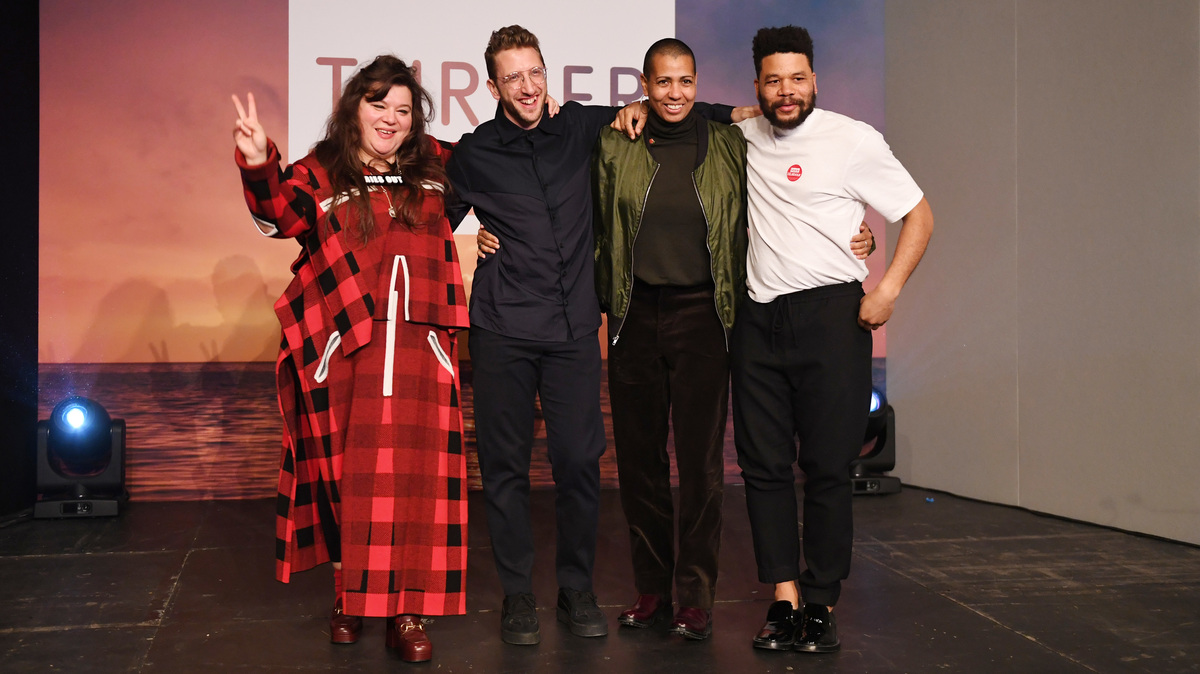 Tai Shani, Lawrence Abu Hamdan, Helen Cammock and Oscar Murillo pose for photographs after their names were announced as joint winners of the 2019 Turner Prize.

On Tuesday night, four young artists had a chance to join a pantheon of Turner Prize winners, a list studded with a slew of marquee names. Like many of the awards handed out in the arts community, from the National Book Awards to the Oscars, the judges were expected to pluck just one winner from the crop of finalists — just as the prize named for painter J.M.W. Turner had been doing for some three and a half decades.

It didn't exactly go that way.

"Here's something quite extraordinary," Edward Enninful, editor-in-chief of British Vogue and the televised ceremony's emcee, said after opening the envelop containing the name of the winner. Well, actually — make that names.

The card within explained that, in a surprising turn of events, the judges had unanimously accepted a joint request lodged that same day by all four finalists — Lawrence Abu Hamdan, Helen Cammock, Tai Shani and Oscar Murillo — to receive the prize as a collective, rather than singling out just one artist for the honor.

"At this time of political crisis in Britain and much of the world, when there is already so much that divides and isolates people and communities," the finalists said in their joint letter to judges, "we feel strongly motivated to use the occasion of the Prize to make a collective statement in the name of commonality, multiplicity and solidarity — in art as in society."

In a word, they all won the prize. Usually, it goes to just one artist born or primarily based in Britain; instead, the quartet agreed to split the $52,000 purse.

"In coming together and presenting themselves as a group, this year's nominated artists certainly gave the jury a lot to think about. But it is very much in the spirit of these artists' work to challenge convention, to resist polarized world views, and to champion other voices," Alex Farquharson, director of the Tate Britain museum and chair of the judges' panel, said in a statement released Tuesday.

"The jury all felt that this made the collective a worthy winner of the Turner Prize." 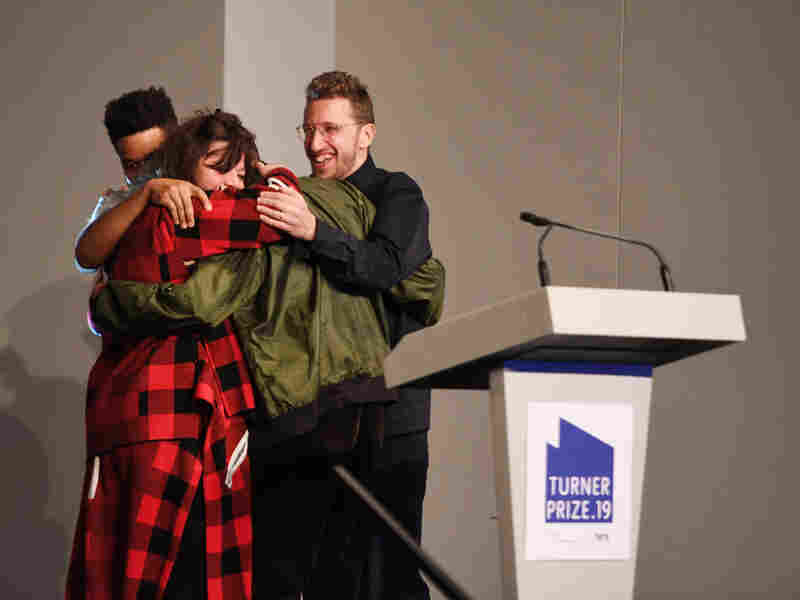 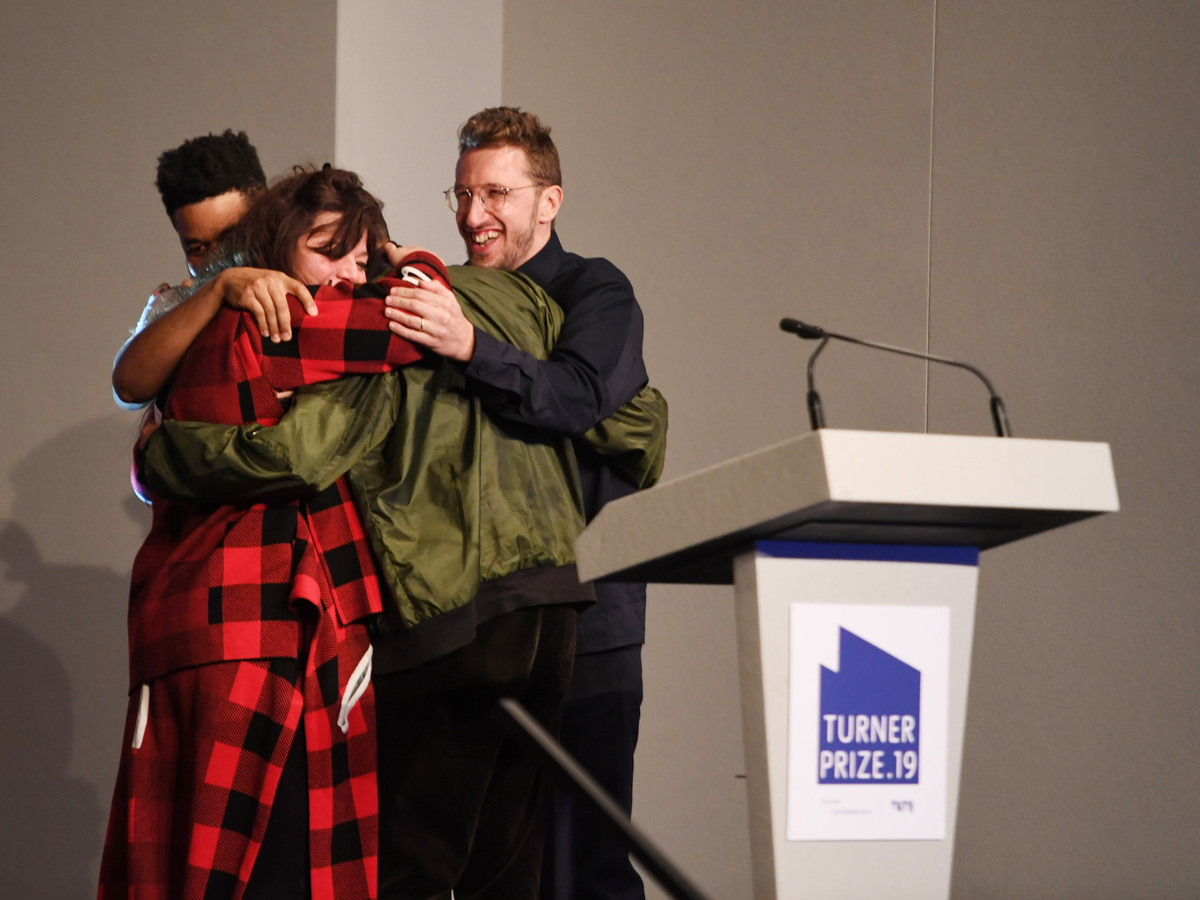 Tai Shani, Lawrence Abu Hamdan, Helen Cammock and Oscar Murillo go in for a group hug after learning their request to be considered joint winners was honored by Turner Prize judges.

All four artists are known for work intimately entwined with political and social statements.

For Abu Hamdan, an audio specialist, that often means a focus on human rights. The projects for which he was nominated feature the stories of survivors of a notorious Syrian prison known as Saydnaya, where international monitors have accused the Assad regime of torturing prisoners, committing mass atrocities and burning victims' remains en masse.

In Cammock's nominated mixed-media project, she focused on the role of women in the civil rights movement in Northern Ireland in the late 1960s, using archival footage and interviews to expand on the history of the early years of The Troubles. Shani's nominated project is a loose performance adaptation of The Book of the City of Ladies, a 15th-century book by Christine de Pizan that's considered an early work of feminism.

And in Murillo's nominated work themes emerge of migration, oppression and squalid labor conditions, some drawn from his own personal history.

In other words, despite their shared commitment to tackling difficult contemporary social issues, the issues they tackle vary widely. That would pose a problem if only one of them were to win, as the four finalists saw it.

"The politics we deal with differ greatly," they said in their letter, "and for us it would feel problematic if they were pitted against each other, with the implication that one was more important, significant or more worthy of attention than the others."

Unprecedented though the move may have been — at least when it comes to the history of the Turner Prize — this is only the second time in as many months that a major British cultural award has surprised observers by honoring more than one winner. The Booker Prize, the preeminent literary award for fiction written in English and published in the U.K., also bucked tradition in mid-October to recognize both Margaret Atwood's The Testaments and Bernardine Everisto's Girl Woman, Other.

That's not to say the result Tuesday night was universally celebrated. Plenty of observers lamented what some described as a "total devaluation" of the prize and arts criticism, and what others called proof that "now, everyone has to be a winner." In a piece for The Independent, one critic said the prize had simply "put itself out of business."

Still, criticism was set to the side during the ceremony, which saw a standing ovation among attendees in the town of Margate.

"Placing in contention the issues in our work would undermine our individual artistic efforts to show a world entangled. The issues we each deal with are as inseparable as climate chaos is from capitalism," Cammock said in the acceptance speech she delivered on behalf of all four.

"We each seek to use art to push the edges of our issues, mapping the bleed of one into another — across time, across sectionalities, across the realm of the real and the imagined and through walls and borders."