Accessibility links
Review: Horror Flowers In 'Little Joe' A plant scientist (Emily Beechum) breeds a flower that makes people happy in this "effectively creepy indie" that gets its tendrils in you. 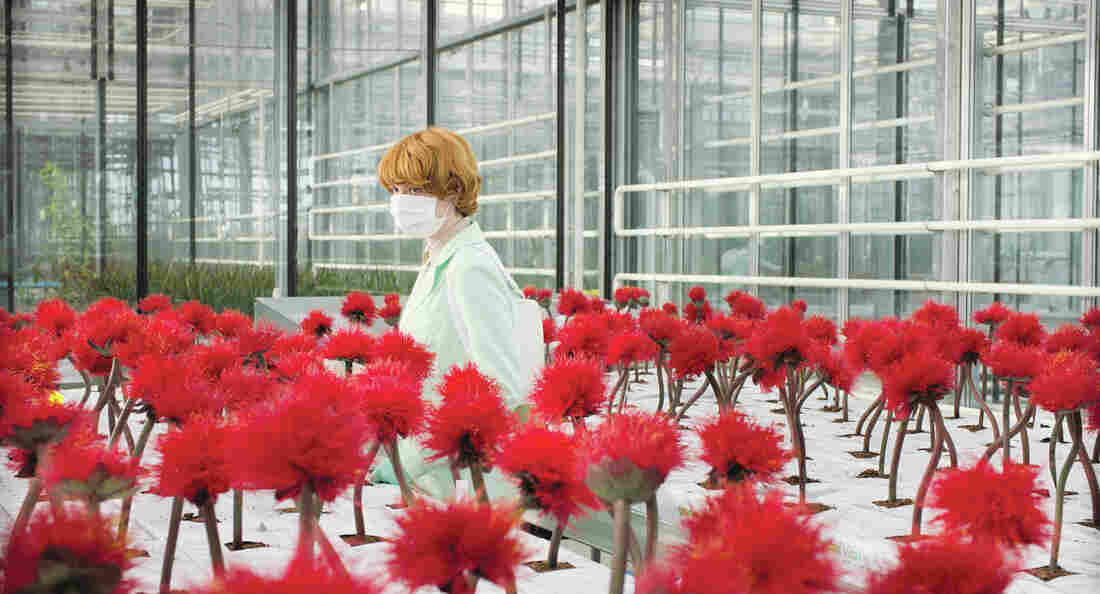 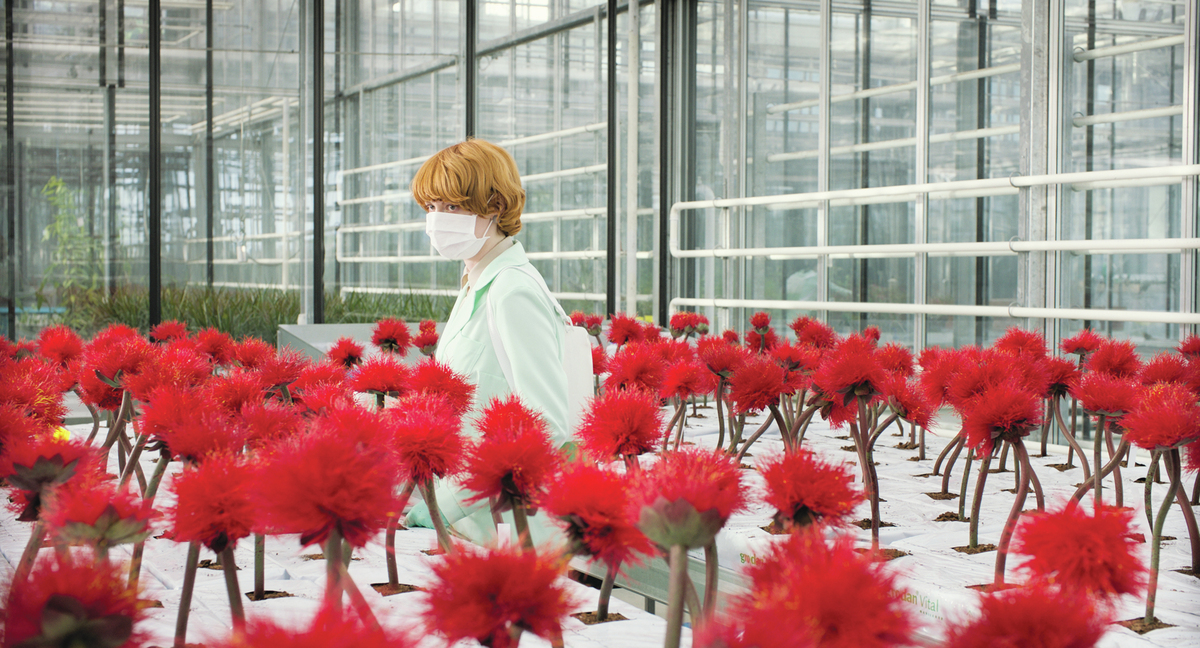 When we meet Alice (Emily Beecham), a single mother and bio-engineer devoted to her work in the effectively creepy indie Little Joe, she's busy propagating a plant whose smell will make all interested smellers happy. So far so plausible: Tampering with nature in the name of the public good — or because we can — is all the rage in life and in movies. Around Alice, apparently normal workplace stuff is going on. A pompous boss (David Wilmot) asserts his authority just because. An ostentatiously diplomatic young assistant with big hair (Phénix Brossard) lurks. A seemingly timid older worker, Bella (played by the terrific New Zealand actress Kerry Fox, who's most famous for her role as Janet Frame in Jane Campion's An Angel at My Table), brings her beloved dog Bello to work. For now, the only irritant in Alice's workaholic routine is the crush her colleague Chris (Ben Whishaw) nurses on her. She swats him away and comes to work in stiff shirts buttoned to the neck.

But Austrian director Jessica Hausner (Lourdes, Amour Fou) is a sly one with signaling. She wants you to notice Alice's coiffure, which looks like an inverted bronze buttercup and doesn't move much when she does. The flowers blooming nicely in the lab, whose clinical pastels deepen at critical plot points into livid reds and purples, look shiny and hyper-real and emit a crimson pollen that makes people sneeze, and more. A jarring whine buzzes on the soundtrack like a chorus of electronic crickets, cunningly blended with a soothing flute from Japanese composer Teiji Ito. Workers move about slowly in their crisp, mint-green lab coats, murmuring to one another in incrementally menacing undertones.

Zombie time? Not exactly: Multiple possible realities seethe on and below the surface of Alice's everyday world, and like all the best Alices on page and screen, this one is about to fall down a deep rabbit hole. In fact, though she energetically suppresses a vague unease she speaks of only to her forbearing therapist (Lindsay Duncan), Alice is already on a slow but steady slide downhill.

A single parent, Alice is torn between her devotion to her cherubic adolescent son Joe (Kit Connor) and her need for time to perfect the cultivation of a plant that will oblige with perfume so long as its owners nurture it as they would a child. Flouting lab rules, she brings a bright red new plant home for Joe to care for, naming it Little Joe. That makes two little Joes to worry about, and on one level Alice's inner conflict echoes that of a multi-tasking young widow and single mom whose home is invaded by a monster in Jennifer Kent's domestic horror movie The Babadook.

As in The Babadook, the question before us is whether a mother's growing doubt and distress are the result of her inner conflict or of the increasingly aggressive behavior of her plants? Does that shirt Joe is wearing have a bull's-eye target in the chest area, or is it just an innocent tie-dye? Are her son's growing distance and passive resistance just the normal struggles for autonomy of an incipient teenager, a subtle bad seed, or a smart kid who knows his mother better than she does? To add to Alice's troubles, her male colleagues start to gang up on her and on Bella, whose history of mental illness they cunningly exploit.

Like many heavily designed films that speak from a conceptual great height, Little Joe allows us only a narrow field of emotional engagement moving between discomfort to dread with a side of mordant comedy. But that leaves us free to toggle between a fairy tale of the Grimm variety and a hyper-realist story of science, nature and the contemporary female psyche. Is the Viennese director calling our attention to what Freud called our everyday miseries, with all our attendant strategies of denial and hysteria? Or, as the flowering and fizzing red plant now sitting innocently in her therapist's hallway hints, have the gung-ho scientists been defeated by the imperatives of nature?

"We only ever find what we're looking for," a wised-up Bella tries to warn Alice. Whether or not she heeds that advice, in the end our heroine makes a choice, or a "choice," that everyone seems happy with. At the end of Little Joe Hausner slips in an audacious validation of women's ambition that's sure to ruffle feathers both male and female. Whichever malign source of her anguish you chose to take on board at the outset of this clever thriller, Alice doesn't live there any more.