Accessibility links
Navigating The Fallout Of Alleged Abuse And Betrayal In A Sacred Muslim Space An American Muslim organization severed ties with its founder over allegations of abuse. It reignited a conversation among American Muslims about how to hold faith leaders accountable.

Listen · 5:19 5:19
Navigating The Fallout Of Alleged Abuse And Betrayal In A Sacred Muslim Space 5:19 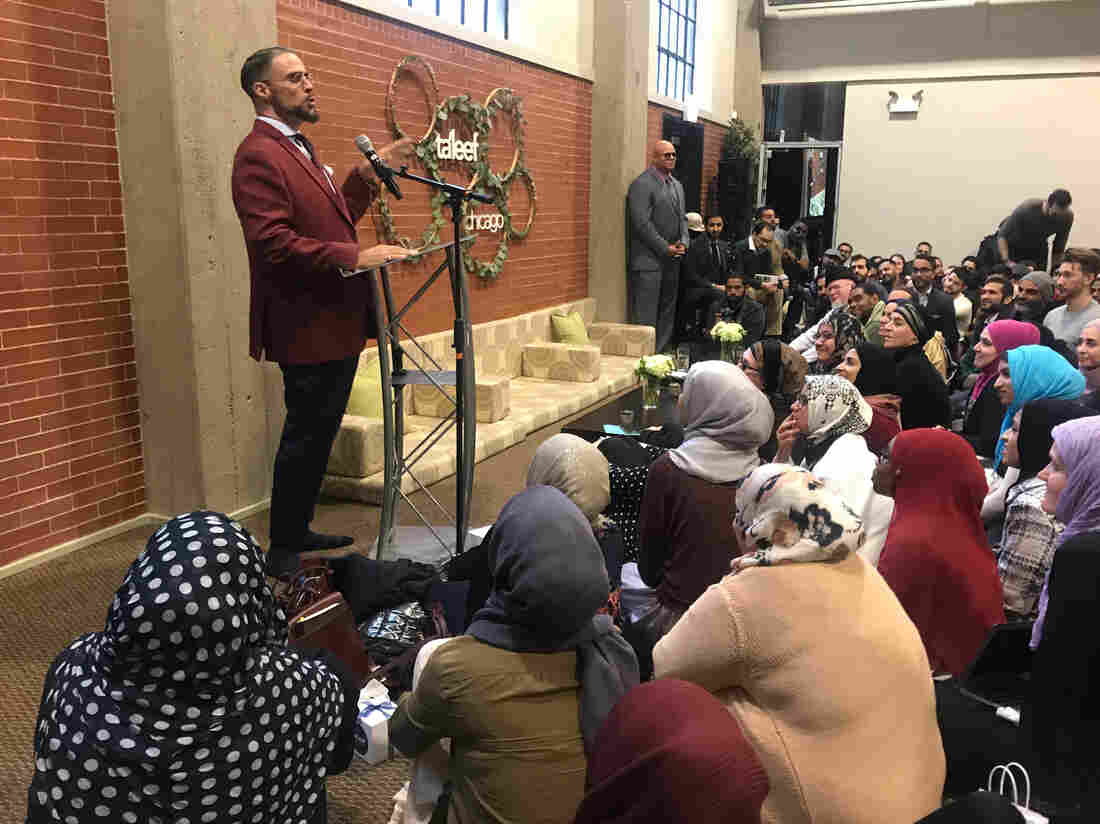 In one of his last talks before taking a leave of absence, Usama Canon addresses a crowd at Ta'leef Chicago's campus. Today his legacy is in jeopardy. Leila Fadel/NPR hide caption 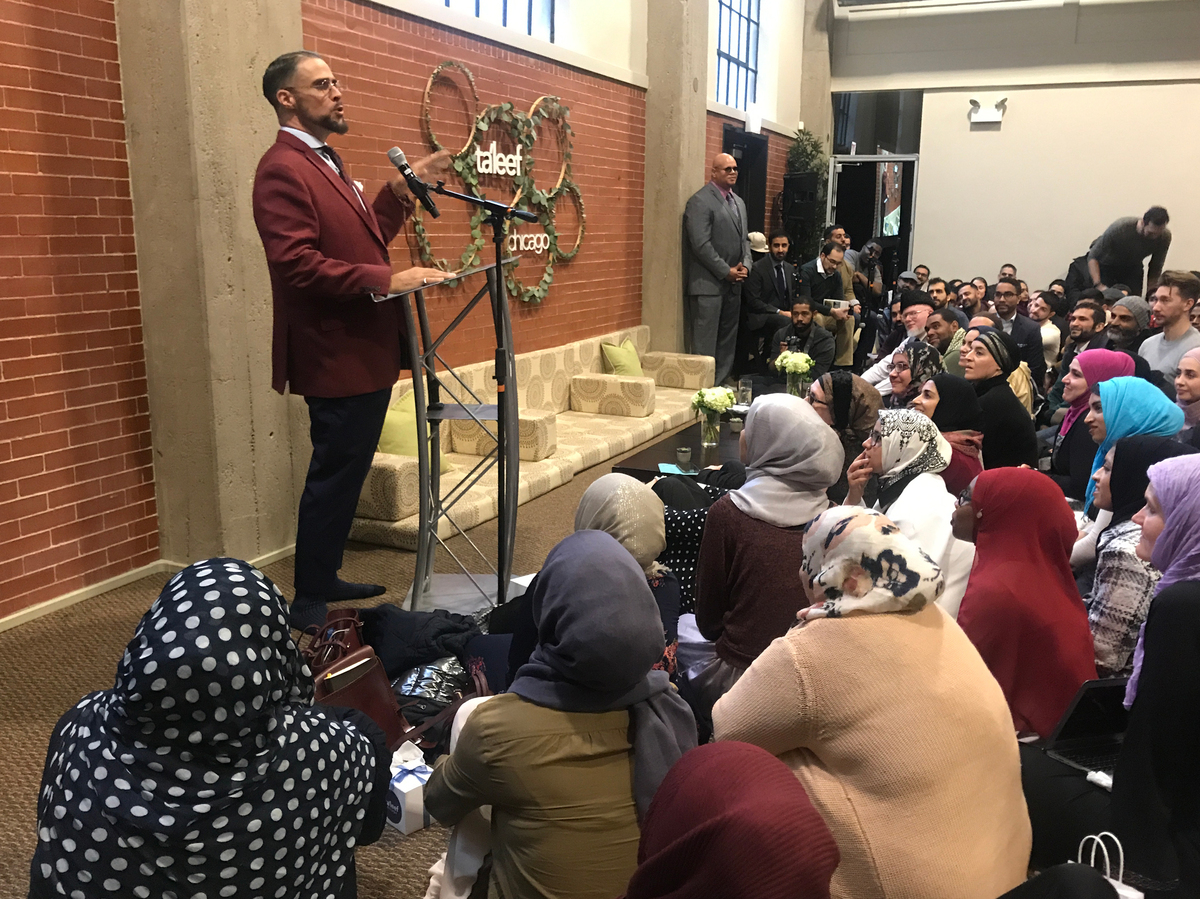 In one of his last talks before taking a leave of absence, Usama Canon addresses a crowd at Ta'leef Chicago's campus. Today his legacy is in jeopardy.

Nearly two years ago NPR profiled Usama Canon, a celebrated Muslim preacher facing his own mortality. He'd been public about his diagnosis of Lou Gehrig's disease, or ALS, a degenerative neurologic condition that robs people of their ability to move, to speak. Eventually it takes your life. The reaction to the news, an outpouring of grief from thousands of American Muslims that looked to Canon as a spiritual guide and to his nontraditional Muslim space, Ta'leef, as a place that felt welcoming without judgment. It's in the motto "come as you are, to Islam as it is."

At that time Canon reflected on his legacy.

"It's only as lasting as the women and men that have hopefully benefited and learned," he said.

An American Muslim Preacher Faces His Own Mortality

Today that legacy is in jeopardy. The organization he founded with spiritual gathering spaces in Northern California and Chicago, publicly severed ties with him last month in a statement. It announced "he has deeply betrayed the sanctity of the position of spiritual teacher." It went on to describe allegations that included "verbal abuse and abuse of authority" and accusations of a "more serious nature." Allegations, the statement said, Canon "remorsefully admitted to."

People inside and outside of the organization say those more serious accusations are him allegedly using his position to engage in secret and "pleasure" marriages. Pleasure or temporary marriages are a controversial practice among some Muslims that have no U.S. legal standing, the religious justification for the marriages is fiercely debated and the practice is sometimes used to exploit women.

The reaction to the statement from Ta'leef was swift, public and messy in a long thread on the organization's Facebook page that has since been taken down. The comments, a window into the way these scandals divide, confuse and bereave communities as they grapple with a beloved figure being accused of abuse.

One Canon supporter wrote, "Burden of proof lies on the accusers." Another wrote, "You as a Muslim should be ashamed of yourself that you are willing to jump the gun and automatically believe an accusation without ample proof."

Other comments were filled with questions about what the nature of the abuse was, still others asking why Ta'leef went public when Canon was so sick. And then there were the expressions of grief, pain and disbelief. Through the hundreds of online posts someone wrote, "I hope the survivors aren't reading these comments. I am very ashamed and saddened of the ummah [Muslim community] thinking more of the abuser than the abused."

It's the latest public scandal involving a respected figure to roil Muslims in the west over the past few years. In 2017, it was a sexting scandal from a rigidly conservative American Muslim celebrity preacher, Nouman Ali Khan, accused of using his position to lure women into sexual relationships under the guise of a secret marriage. In another, a prominent Swiss scholar of Islam, Tariq Ramadan, is facing charges in France for the alleged rape of at least two women. He denies the accusations. It's reignited a conversation around how to deal with abuse by Muslim community and faith leaders.

While Muslim victim advocates commended Ta'leef for the rare public stance it took, they also worried the statement was too vague and left people to fill in the blanks themselves.

"You have this lack of clarity that doesn't do justice to what these victims experienced," said Alia Salem, the founder and executive director of a Muslim organization called FACE. It provides resources for victims and investigates abuse allegations against spiritual and community leaders. "But you also have a really difficult position that the administration found them self in because of his health condition."

In the weeks since the statement, Canon's organization has tried to figure out how to navigate the fallout of alleged abuse and betrayal in a sacred space. In a post on their Facebook page asking for donations on Giving Tuesday, they expressed "uncertainty around the future of Ta'leef." Meanwhile the man in question is in the late stages of ALS, unable to speak or text, according to his wife. She answered a message requesting comment on Canon's behalf. No further comment was given. Canon is communicating though, with a computer that reads eye movements. Some say they've received texted apologies from him.

In the wake of the accusations, at least three people have gone to Salem's organization, FACE, which stands for Facing Abuse in Community Environments, for help. She also observed a healing circle at Ta'leef's Northern California campus.

"They fell short once again, because in that healing circle, which is for the community that's left to deal with what has just happened. They went to extreme lengths to talk about how much they loved this person, even though he was a violator, and how their actions were only to protect the institution," she said.

It took over an hour before a mention of any possible victims came up and only in response to Salem's question.

"[They were] extolling all of these praises for this individual who had violations that were so severe they had to completely cut ties with him. All I'm thinking about in that moment is, 'oh my God I know that there are victims in this room,'" she said. "What are they going through in this moment? This is the furthest thing from healing."

And that focus Salem said, is how abusers get away with financial, sexual, physical or spiritual abuse. There's also the issue of people conflating the Islamic practice of not gossiping about people's sins with the real need to root out and warn of abuse.

These manifests themselves almost identically in other religious groups. But minorities, like American Muslims, have the added burden of being scrutinized and demonized.

In order to create a cultural shift, she said, Muslim organizations need to focus on victims rather than accused leaders like Canon and other popular figures.

And in the era of #TimesUp and #MeToo there are some breaking the silence. More Muslims, specifically women, are speaking up. An American Muslim rapper, Mona Haydar, released a song a couple years ago, Dogs, calling out lascivious religious leaders.

Muslim groups such as Salem's aimed at preventing abuse by powerful leaders, are popping up across the United States. There's the northern California-based In Shaykh's Clothing, it focuses on spiritual abuse. There's also the Chicago-based Heart Women and Girls focused on sexual health and sexual violence. Salem started her Dallas-based organization, FACE, because she didn't know where to turn when a mother came to her for help. The woman's daughter was allegedly manipulated into sex with a married Texas-based cleric, three times her age. She says the cleric met the woman at 13. He was the imam at her mosque. He then allegedly groomed her for years before luring her to a Motel 6 to have sex with her at 18.

"I was trying to figure out how to help and realized we had no mechanism in the community to authoritatively deal with this," she said.

So she created the mechanism. In some cases, her organization releases public misconduct reports to warn Muslim communities, like in the Texas case. The victim sued the accused cleric Zia Ul-Haq Sheikh and won. The judge ordered him to pay his accuser more than two and half million dollars for mental anguish and other damages. Haq denied any wrong doing in an email to NPR and has begun the appeals process. This month, FACE released its second report — this time documenting the alleged abuse of a Phoenix-based imam.

Salem's work, she says, is driven by her Muslim faith.

"I take the work that I do as a commandment. When we talk about leadership and accountability and trying to purify our communities from abuse and corruption. That is a is a huge responsibility," she said. "And if we don't do it, somebody else will. So we might as well clean house ourselves because we're obligated to, from a religious perspective anyways."

She references a passage from the Q'uran that translates "O you who believe. Stand out firmly for justice, as witnesses to God, even as against yourselves, or your parents, or your kin."

Some of the abuse is a result of absolute negligence by institutions, said Ingrid Mattson, the London and Windsor Community Chair in Islamic Studies at Huron University College at the University of Western Ontario in London, Canada. She's a leading Muslim figure and her work focuses on how to solve societal problems.

But, she said, it also often stems from a lack of oversight and understanding about how to handle allegations of abuse when they're brought forward. Most mosques and other American Muslim institutions are small, operate independently and don't have procedures in place to institute background checks or investigate complaints.

"Up to now, most communities are doing that in-house, if at all, if they even understand the need to have something, a grievance committee," she said. "So that's really where research into best practices, protocols and investigative functions need to be gathered together collectively by the community, in order to really meet the requirements of due diligence and accountability. And allowing these spaces to be known to operate as they are supposed to operate, which is a space for learning and community."

Her work is based on her area of scholarship, Islamic ethics.

"This is very much an ethical problem and it's a pressing one," Mattson said. "Spiritual abuse is something that is harmful at the deepest level of the person. It can end up creating a barrier to the very things that person might find healing: prayer and community, their own sense of dignity in the relationship with God."