Accessibility links
Comet 2I/Borisov Came From Another Star, But It Looks Oddly Familiar The comet, 2I/Borisov, looks surprisingly like comets closer to home. It's a sign that the processes that formed the sun and planets are at work elsewhere in the universe. 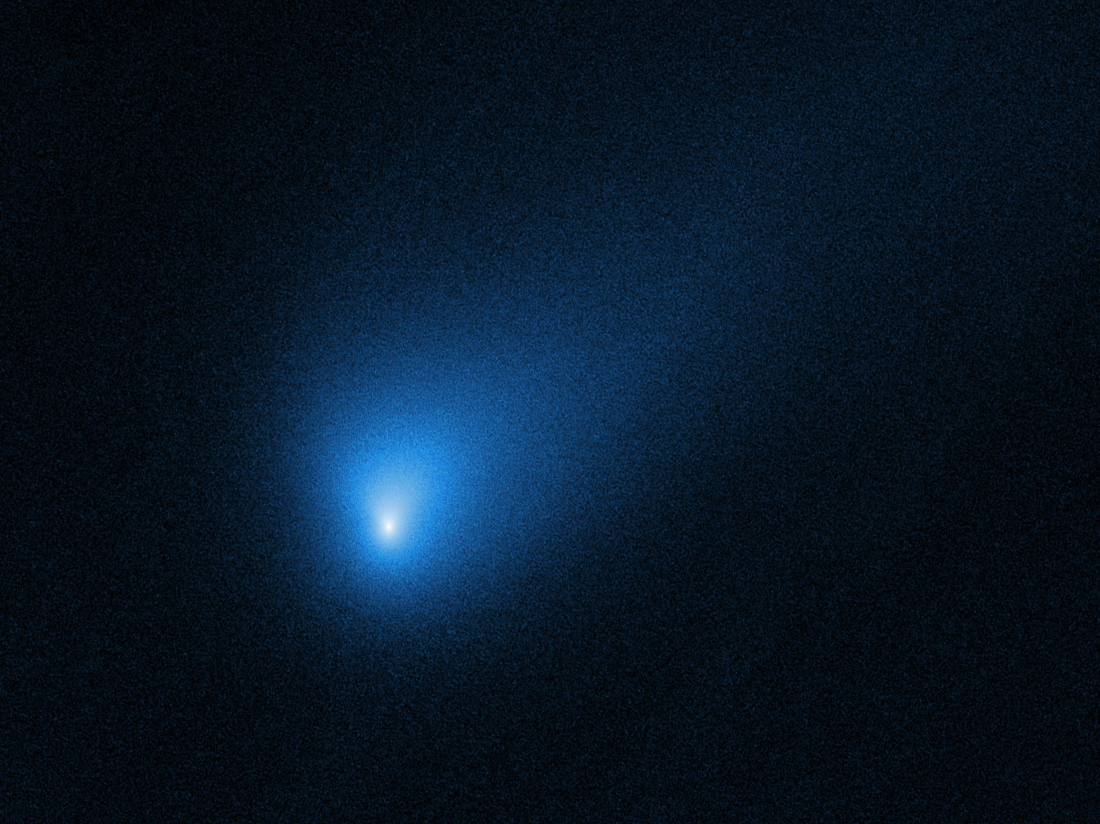 The comet 2I/Borisov as imaged by the Hubble Space Telescope on October 12. Borisov will swing by the sun and then head back into deep space. NASA, ESA and D. Jewitt (UCLA) hide caption 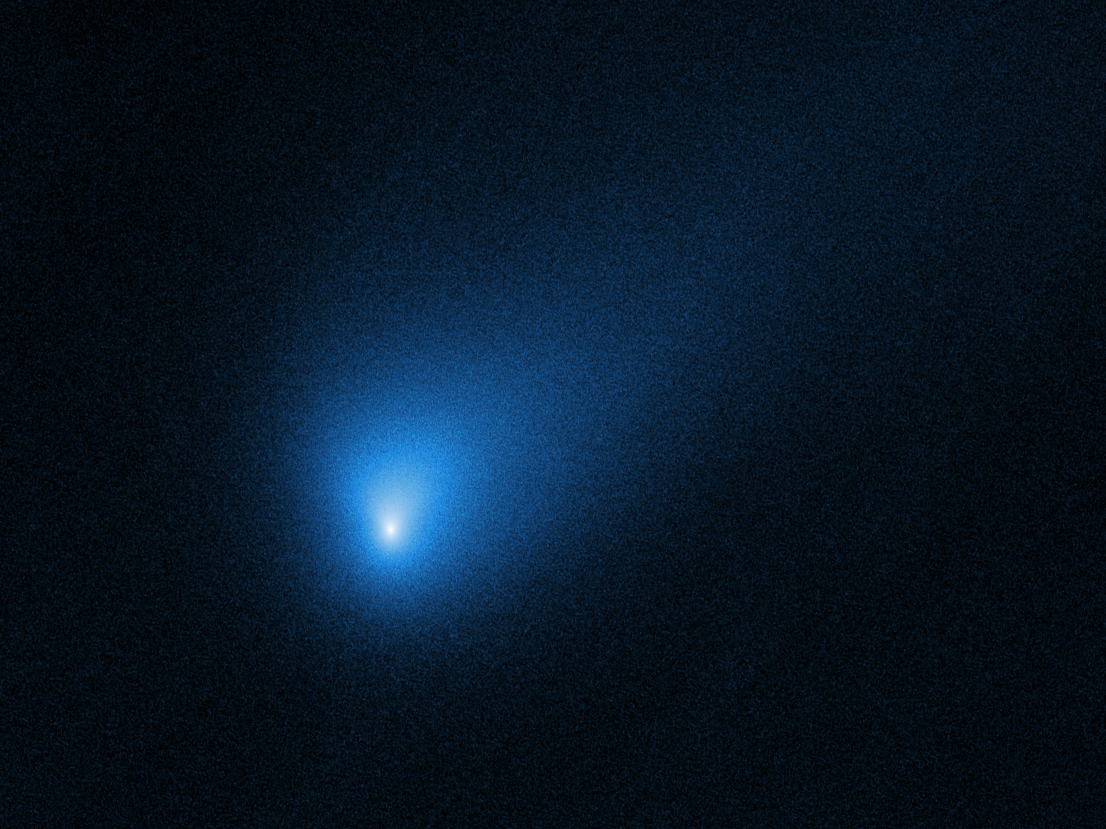 The comet 2I/Borisov as imaged by the Hubble Space Telescope on October 12. Borisov will swing by the sun and then head back into deep space.

A comet from another star will swing by our sun Dec. 8.

Known as 2I/Borisov, it is the first comet to ever be seen coming from interstellar space. But despite its alien origins, astronomers say it actually looks pretty familiar.

"Borisov is a comet very like what we have in our own solar system," says Michele Bannister, a planetary astronomer at Queen's University Belfast told NPR's Short Wave. Whatever planetary system it formed in, "it's a lot like our own."

New discoveries, everyday mysteries, and the science behind the headlines — all in about 10 minutes, every weekday. Short Wave is science for everyone, using a lot of creativity and a little humor. Subscribe to the podcast and follow @NPRScience on Twitter. 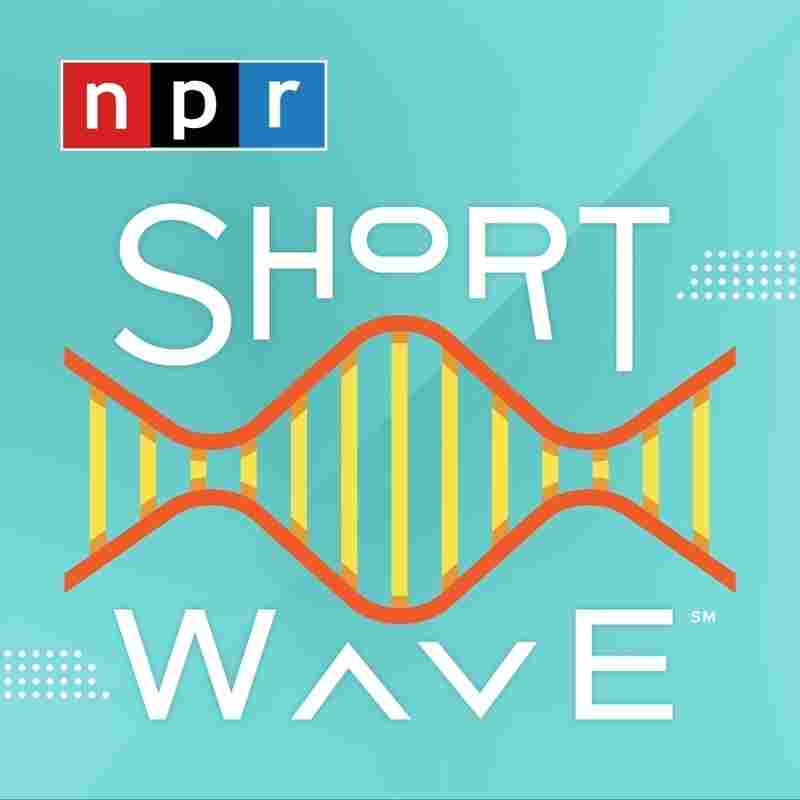 Borisov was first spotted by an amateur astronomer named Gennady Borisov back in August. Professionals quickly followed up and established that the comet was not from our neighborhood. Many of the solar system's comets reside in the so-called Oort Cloud, a region many thousands of times farther out from the sun than Earth's orbit. Borisov, by contrast, is coming in from deep space.

Ye Quanzhi of the University of Maryland is one of many astronomers trying to figure out where the heck it came from. He and his colleagues have been looking at photos of the comet, trying to trace its trajectory, and thus work out the last star it visited.

"The Universe is big, so we can only speculate," Ye says.

Bannister says that Borisov likely formed around another star in a system far, far away.

Although exactly how comets form is still a bit of a mystery, they are thought to be made around stars in the same primordial clouds that make planets and asteroids, Bannister says.

"You can think of [a comet] as either a dusty ice ball or an icy dust ball," she says. Star systems can make trillions of comets, some of which get ejected into deep space as planets and other objects in a planetary system move around and congeal. Bannister says Borisov is likely one of those wanderers.

But for something that's traveled for potentially eons across the galaxy, this comet appears to have the same water ice and other chemical constituents of comets closer to home. "That means there's something universal in the universe," Ye says.

The same cosmic forces that formed our solar system, and all the comets in it, seem to be at work elsewhere. Of course, there's no way to know if those forces have also made other Earths, or life, or little green people with telescopes of their own. But Borisov is one data point to suggest that our solar system is, perhaps, not unique.

After Borisov passes near the sun, it will shoot back out into the icy void, on to the next star.

"It's gone," Ye says. "It's just like you meet someone and you're pretty sure you're never going to see her again."

Even though our paths crossed only briefly, it seems that astronomers have found something in common with comet Borisov. "The chemistry that's going on in at least one star, somewhere in the night sky, in our galaxy, is like what we have here at home," Bannister says. "It's telling us we have a great commonality across the galaxy."

A previous Web version of this story incorrectly stated that the Oort Cloud is a region 30 to 50 times farther from the sun than Earth's orbit. In fact, it is thousands of times farther.