Accessibility links
Book Review: '1973: Rock At The Crossroads' Acts As A Mirror For One Moment In Time Via popular music, Andrew Grant Jackson paints a vivid portrait of a year that was the last gasp of an age of possibility, when idealism gave way to economic recession and cynical disillusionment.

'1973: Rock At The Crossroads' Acts As A Mirror For One Moment In Time

'1973: Rock At The Crossroads' Acts As A Mirror For One Moment In Time 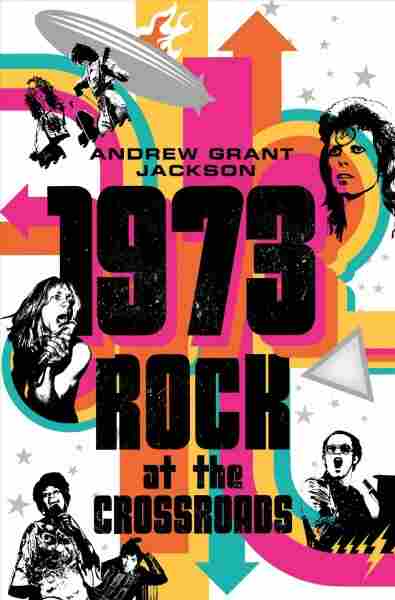 Rock at the Crossroads

"Your everlasting summer, you can see it fading fast," sang Steely Dan in their 1973 hit "Reelin' in the Years," "So you grab a piece of something that you think is going to last."

If you believe that 1973 marked the real end of the 1960s as a cultural era, it's a fitting sentiment — the year was the last gasp of an age of possibility, when sunny idealism gave way to economic recession and cynical disillusionment.

Or as Andrew Grant Jackson writes in his fascinating new book, 1973: Rock at the Crossroads:

"If the cultural reformation of 1965-72 was a bomb, 1973 was the aftermath. The debris rained down. The sun streaked through the smoke onto the road ahead. Like everyone else, the musicians tried to process what had just happened and figure out what was next. They did so through a series of albums and singles that represent the zenith of classic rock."

Jackson's book paints a vivid portrait of the year through the lens of popular music — mostly rock, but also country and hip-hop, the latter of which was essentially invented in 1973 in New York. The music of that year still remains present in today's culture; citing the website FiveThirtyEight, Jackson points out that "classic rock stations today play more songs from 1973 than any other year."

The book is structured chronologically, beginning with the winter releases of such still-legendary albums as Dream On by Aerosmith, Greetings From Asbury Park, N.J. by Bruce Springsteen, and Aladdin Sane by David Bowie, who gets more ink than any other musician in the book. That's no surprise — Bowie was responsible for some of rock's greatest innovations, and 1973 was the year he retired his Ziggy Stardust persona, which helped bring glam rock into the mainstream.

Bowie was also, as Jackson writes, "possibly the first rocker" to come out as gay (although he would later identify variously as bisexual and "closet heterosexual"). Throughout the book, Jackson writes about the social trends and historical events of the 1970s, and his analysis of sexuality and rock music is particularly interesting — he writes movingly about Lou Reed's "Walk on the Wild Side," released just weeks before 1973, which he notes "became the theme song for New York after midnight in the era between Stonewall and AIDS."

Jackson also takes a fascinating look at gender and rock music. It was 1973 when the Supreme Court handed down their landmark decision in Roe v. Wade, and also the year Helen Reddy memorably won a Grammy for her feminist anthem "I Am Woman." (Reddy's producer, Jackson writes, insisted that Reddy appear on television shows while pregnant to demonstrate to the world that she could "get a man," so it wasn't all good news for women.) Jackson intersperses his writing about woman musicians like Suzi Quatro, Joan Jett, Dolly Parton and members of the rock band Fanny with history of the feminist movement during the early '70s, providing useful context for readers curious about the rise of women in rock.

While 1973 is chiefly concerned with rock, Jackson also includes well-researched chapters about the year in other genres, writing beautifully about Stevie Wonder's landmark R&B album Innervisions and Gram Parsons' progressive-country record GP. He deftly discusses the sea change in country music that occurred around 1973, when the genre's Nudie-suited old guard gave way to "outlaw" songwriters like Kris Kristofferson and a newly long-haired Willie Nelson.

Jackson also proves to have a real talent for evoking the places that made 1973 such a consequential year in music. He writes about such legendary venues as L.A.'s short-lived Rodney Bingenheimer's English Disco, Austin's late lamented Armadillo World Headquarters and New York's iconic Max's Kansas City. (The latter bar was particularly important to popular music, as Jackson writes, playing host to acts as diverse as Waylon Jennings, Billy Joel, Tom Waits and Charlie Mingus.)

It's clear that the intended audience for 1973 is rock aficionados, and they'll absolutely find much to admire in its pages — the book is the product of a tremendous amount of research, and Jackson writes with an enthusiasm that any music fan will find instantly contagious. He's as comfortable explaining the rise of new radio formats as he is dissecting the lyrics of some of the year's most famous songs, and he clearly loves the subject matter.

But it's also a book that will appeal to anyone with an abiding interest in (relatively) recent American history. Rock music has never existed in a vacuum, and in Jackson's hands it proves to be a fascinating mirror of society as a whole — particularly in an America when the Age of Aquarius was transitioning, awkwardly, to the Age of Watergate. Jackson is a wonderful writer and a knowledgeable guide to the America of the early 1970s, and 1973 is an engaging look at the music that changed our culture forever.