Accessibility links
White House Names Controversial Pick To Head Homelessness Office Advocates for the homeless worry that Robert Marbut, a consultant who has been hired by many cities, will roll back the successes of arranging housing for the homeless. 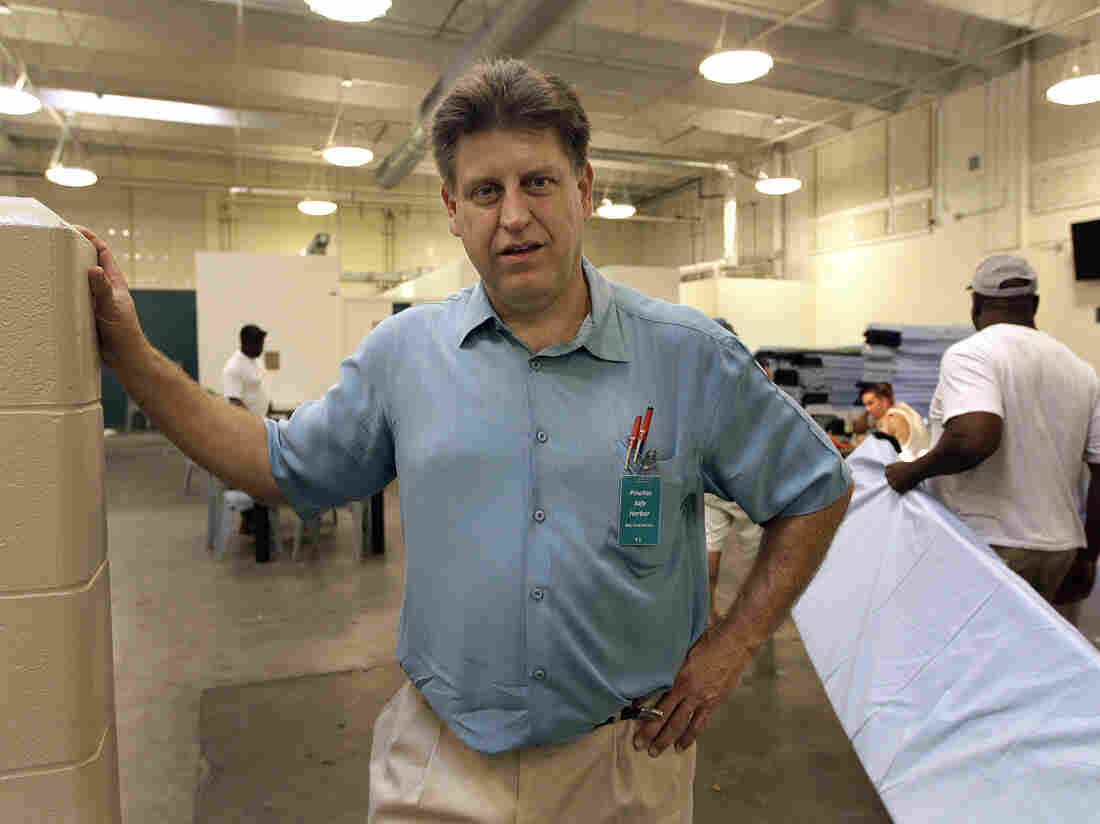 Robert Marbut has been tapped to lead the federal office on homelessness. Marbut is seen here in 2011 in a shelter in Clearwater, Fla. Chris O'Meara/AP hide caption Robert Marbut has been tapped to lead the federal office on homelessness. Marbut is seen here in 2011 in a shelter in Clearwater, Fla.

The Trump Administration has named its choice to lead the federal office on homelessness: Robert Marbut, a well-known consultant to cities trying to tackle the issue.

As the executive director of the U.S. Interagency Council on Homelessness, it will be Marbut's job to coordinate the 19 federal agencies and departments that have some responsibility for the issue -- including Housing, Health and Human Services, Justice, and Veterans Affairs. The office also works with state and local officials, conveying the administration's philosophy on the best ways to combat homelessness.

But advocates for the homeless worry that Marbut's appointment signals a turn away from the approaches that have worked over the last 20 years, getting more people into housing.

Marbut's strategies, they say, are more like those that prevailed in the 1990s, such as attaching services and housing to good behavior. Critics say his work has shifted taxpayer money away from proven strategies such as permanent and affordable housing, and funneled it instead into large shelters that some have compared to prisons.

Homelessness in the U.S. actually decreased by 15 percent from 2007 to 2018, but it remains a huge issue: more than a half million people were experiencing homelessness on a single night last year. California, in particular, is struggling with a large population of unsheltered homeless people.

Marbut made his name as a consultant to cities from Fresno, Calif., to St. Petersburg, Fla., that were working to solve their homelessness problems — often a population of homeless people living on sidewalks or in parks. For each city, Marbut would make a customized plan, generally focused more on services than creating affordable housing. His plans often call for large-scale shelters that provide onsite treatment facilities for various issues.

Nan Roman, who is the head of the National Alliance to End Homelessness, says Marbut's appointment shows is a change from a Housing First strategy to a focus on services.

Housing First is the idea that you need to get people into housing before you can effectively solve the other problems that they may be having.

"Having a home makes it easier to take on these very difficult problems around mental health issues and substance abuse issues," Roman says. "Raising your kids, getting a job — it's really hard to do that when you're staying at a shelter."

So, if people are in crisis and need a place to live, a Housing First approach means that agencies will try to get people into a stable home, without first requiring them to prove they're sober or drug-free.

And research has shown that it works. Utah, for example, reduced its chronically homeless population by 91%.

The George W. Bush administration worked to spread the philosophy as a best practice, and it's now understood as the most effective way to actually reduce the homeless population, as opposed to simply clearing unsheltered people from the sidewalks.

As Eric Tars, an attorney with the National Law Center on Homelessness and Poverty has put it, "In the end, only housing solves homelessness."

But Marbut is not a Housing First proponent, unlike his predecessor, Matthew Doherty, the Obama appointee who was pushed from the post last month.

"I believe in Housing Fourth," Marbut told HuffPost in 2014.

Homeless advocates expressed alarm at the news that Marbut was tapped to lead the office.

"Robert Marbut's approach goes against two decades of research and best practice," wrote Diane Yentel, president of the National Low Income Housing Coalition. She pointed to his opposition to Housing First and an interview in which Marbut says, "Having a home is not the problem for the homeless."

One of the tactics Marbut has recommended to cities is preventing meals from being served to the homeless anywhere but shelters. "Street feeding is one of the worst things to do, because it keeps people in homeless status," he told NPR in 2014. "I think it's very unproductive, very enabling, and it keeps people out of recovery programs."

Many cities don't have enough shelter beds to house their homeless populations, and many shelters close during the day or prohibit bringing pets or belongings.

In Clearwater, Fla., Marbut recommended "preventing the homeless from lying down on sidewalks, banning bathing in fountains and sleeping in public places, expanding rules about panhandling and 'hoarding' in backpacks or shopping carts, and expanding police arrest authority for what are now minor offenses that now just result in a ticket," the Tampa Bay Times reported.

With A Series Of Small Bans, Cities Turn Homelessness Into A Crime

As USICH director, Marbut won't control much in the way of resources. Instead, his influence will come by way of coordinating the White House's strategy on the issue.

And homelessness has been a recurring topic of interest for President Trump, particularly the problems in California. "We can't let Los Angeles, San Francisco and numerous other cities destroy themselves by allowing what's happening," he said on a visit to the state in September.

"We have people living in our ... best highways, our best streets, our best entrances to buildings ... where people in those buildings pay tremendous taxes, where they went to those locations because of the prestige," he said. "And all of a sudden they have tents."

The administration is expected to release its plan to tackle homelessness soon.