Accessibility links
Biologists Investigate Mass Die-Off Of Freshwater Mussels A mysterious die-off of freshwater mussels has scientists scrambling to find a cause. Freshwater mussels clean water and provide habitat to countless other species. 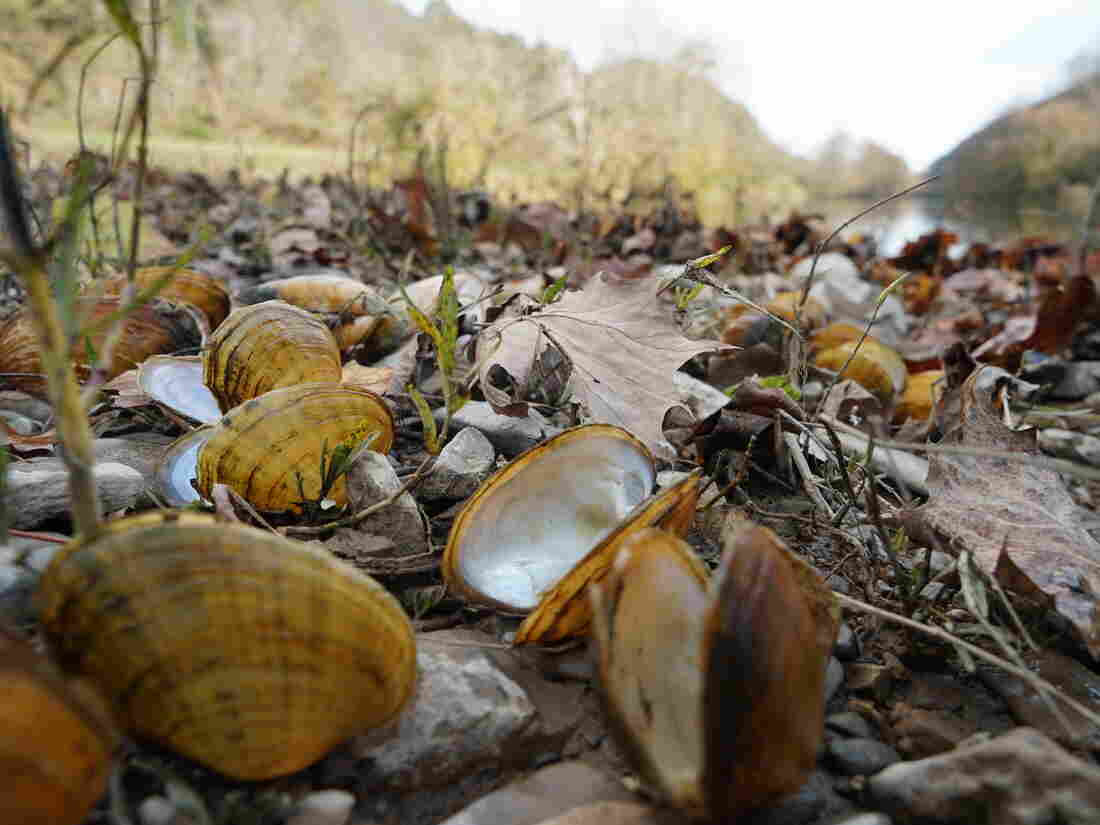 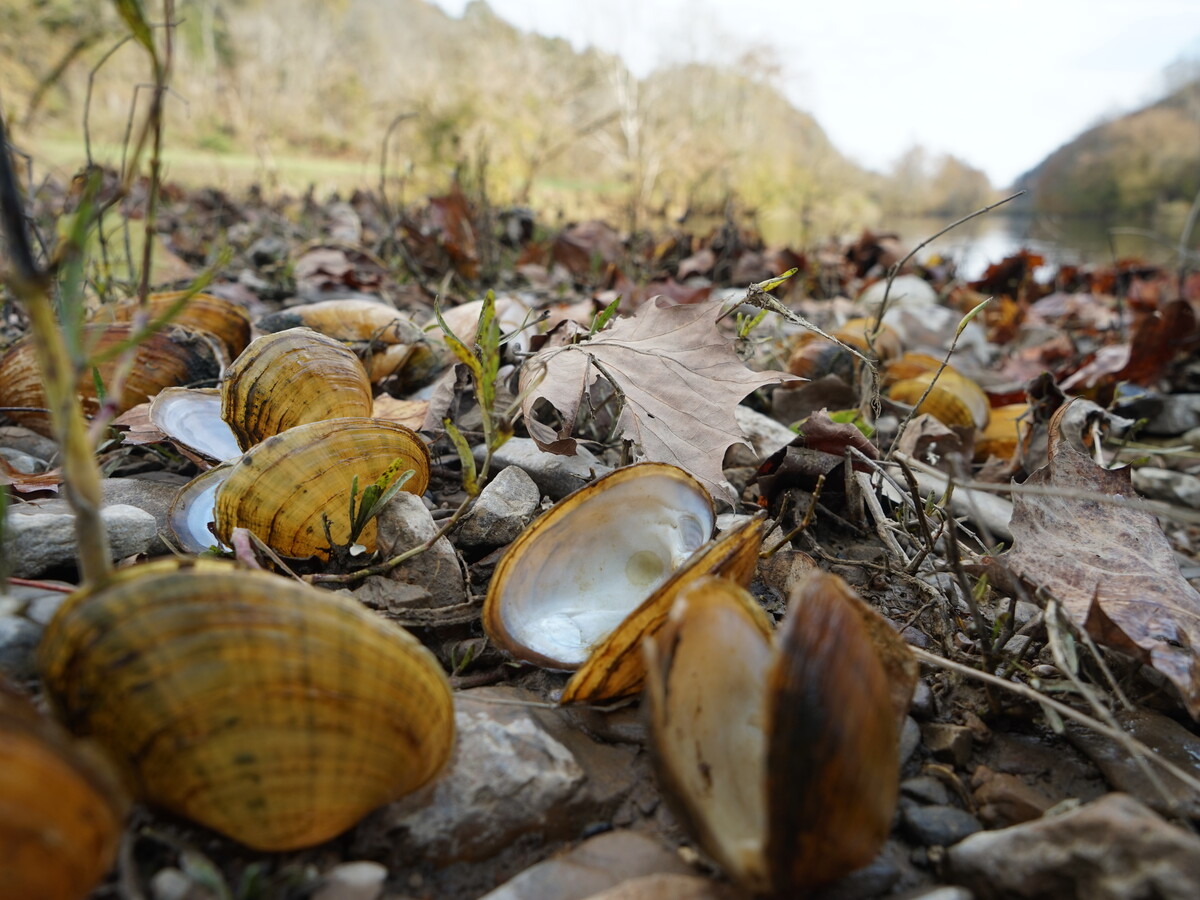 Biologists pile recently dead mussel shells on the edge of the Clinch River after documenting the species' number and type. The smell can get "real bad," says biologist Rose Agbalog.

On "good" bad days, the shells lie open at the bottom of the river, shimmering in the refracted sunlight. Their insides, pearl white and picked clean of flesh, flicker against the dark riverbed like a beacon, alerting the world above to a problem below.

"That's what we look for in die-offs," says biologist Jordan Richard, standing knee-deep in the slow-flowing waters of the Clinch River in southwest Virginia. He points at a faint shape submerged about 10 feet upstream. "I can tell from here that's a pheasantshell, it's dead and it died recently. The algae development is really light."

The pheasantshell is a freshwater mussel, a less-edible version of its saltwater cousin that spends most of its inconspicuous life part-buried in riverbeds, blending in with the rocks and filtering the water around them.

In recent years, though, biologists and fishermen noticed something was wrong. On sections of the Clinch and other waterways in the Pacific Northwest and Midwest, dead mussels were turning up on shores and could be seen glinting from the river bottom. Surveys revealed more recently dead or dying mussels half-buried and rotting in still-clasped shells. 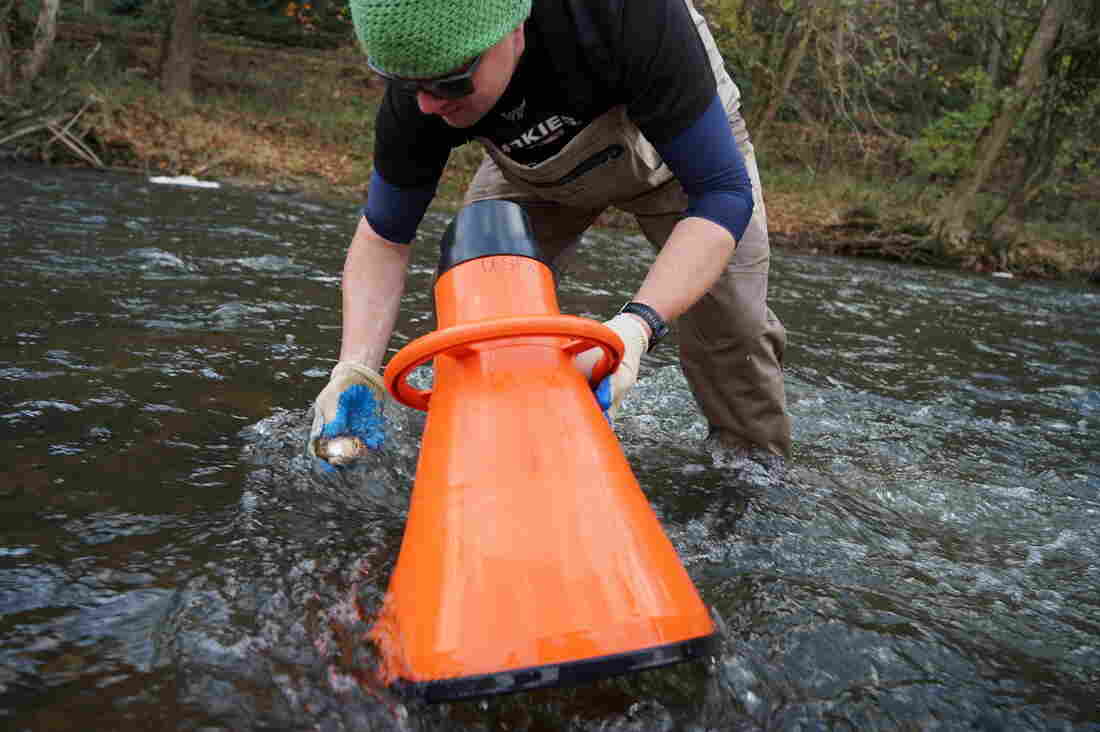 Biologist Jordan Richard pulls a freshwater mussel off the bottom of the Clinch River to see if it's alive. Hundreds of thousands of mussels have perished in the ongoing die-off. Nathan Rott/NPR hide caption

"It would take you 20 to 30 seconds to go from one dead one to another to another," says Richard, who works with the U.S. Fish and Wildlife Service USFWS in Virginia. "And it's been like that week after week after week [every fall] since September 2016."

On the Clinch River alone, hundreds of thousands are believed to have perished, a mass mortality event that has baffled scientists and alarmed ecologists. 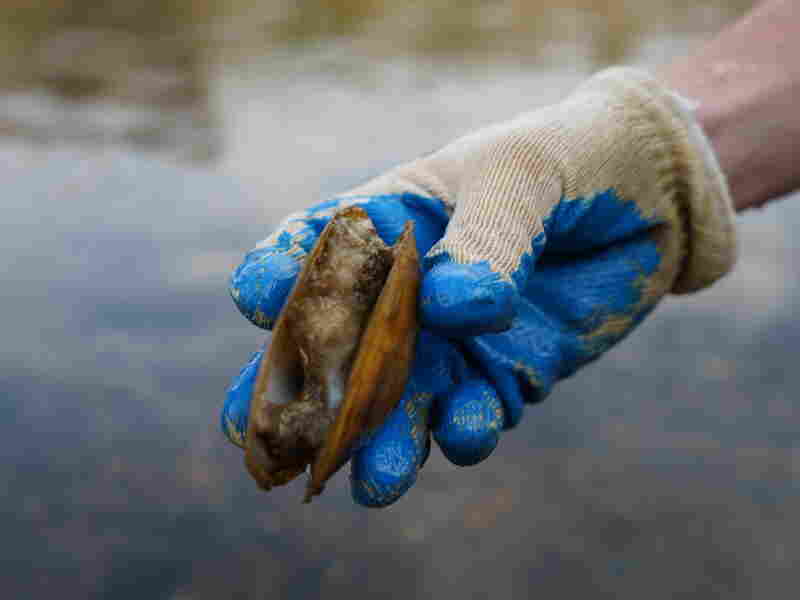 A recently dead pheasantshell mussel is rotting in its shell. Snails, crawfish and other river inhabitants will eat the flesh. "Nothing goes to waste," says Virginia biologist Tim Lane. Nathan Rott/NPR hide caption 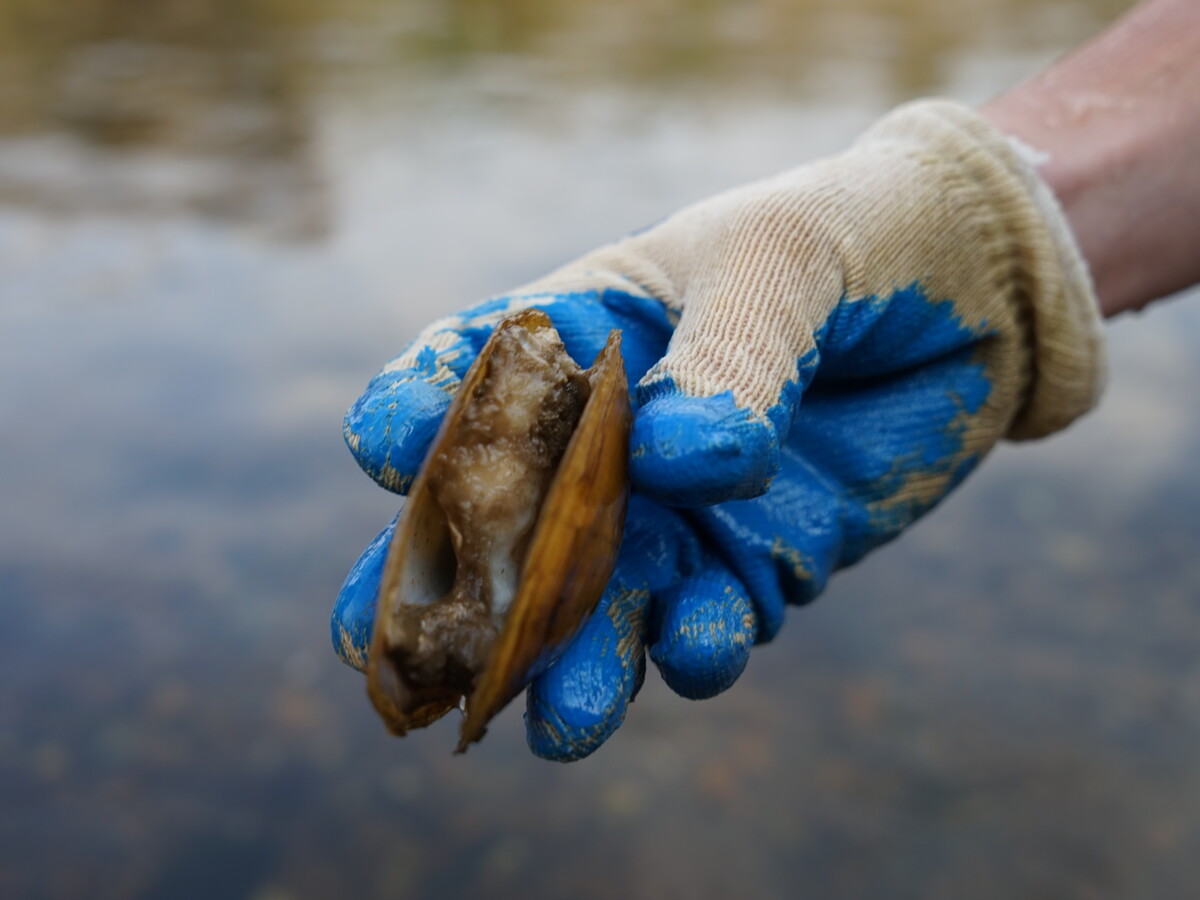 A recently dead pheasantshell mussel is rotting in its shell. Snails, crawfish and other river inhabitants will eat the flesh. "Nothing goes to waste," says Virginia biologist Tim Lane.

Freshwater mussels, like pollinators and trees, are critical to their larger ecosystems and the world around them. They create habitat for other species, like freshwater coral reefs, and help maintain the structure and rigidity of the waterways they call home. They scoop up algae and nutrients, processing and concentrating them for others to eat.

But perhaps most importantly, these soft-bodied invertebrates improve the water quality around them (check out this video.) They filter out sediment and agricultural runoff, limiting the size and impacts of dead zones. They reduce fecal bacteria from water, lowering the risk of E. coli. They sequester carbon, phosphorous and heavy metals. There's even evidence they can remove man-made contaminants from water such as pharmaceuticals, flame retardants and personal care products.

A single freshwater mussel can filter more than 15 gallons of water in a day.

They're like nature's "Brita filter," says Emilie Blevins, a conservation biologist with the Xerces Society for Invertebrate Conservation, an Oregon-based nonprofit that's monitoring and studying the recent die-offs.

"The loss is really huge and it's happening really quickly," Blevins says. "It's a major concern for the future and for the future of our fresh water." 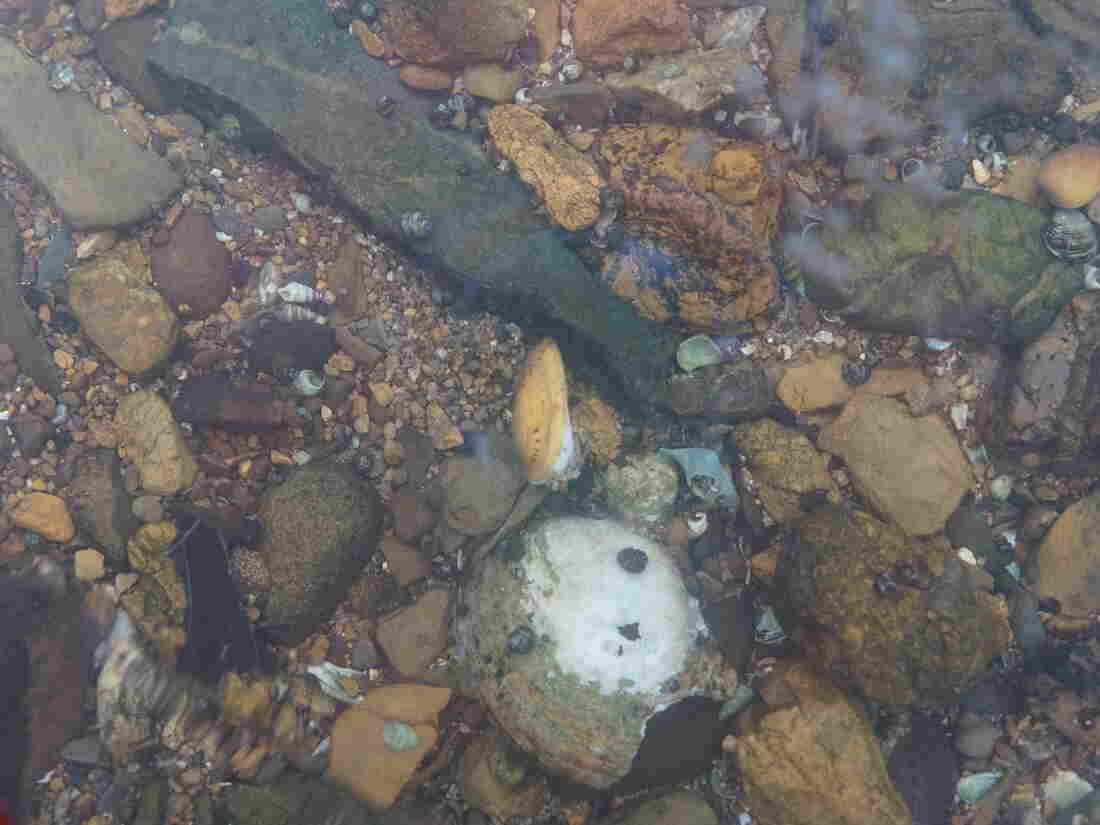 A healthy freshwater mussel is half-buried between rocks in the Clinch River. Mussels are filter feeders that remove algae, sediment and other materials from passing water. Nathan Rott/NPR hide caption 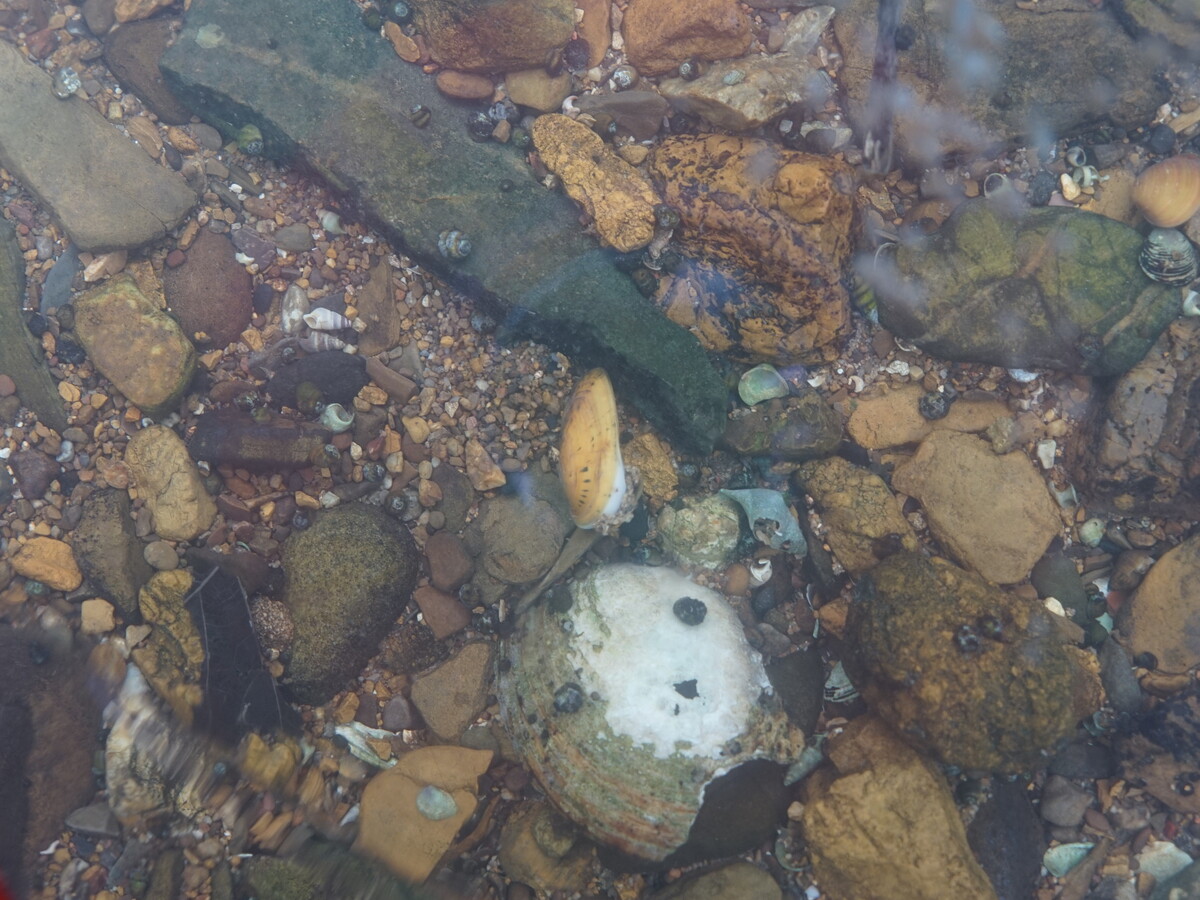 A healthy freshwater mussel is half-buried between rocks in the Clinch River. Mussels are filter feeders that remove algae, sediment and other materials from passing water.

Mussels on the brink

Freshwater mussels are one of most imperiled species on the planet. Nearly three-quarters of North America's roughly 300 native mussel species are endangered, at risk, or of concern. Dozens are already extinct. Humans are the primary cause.

For decades, freshwater mussels were overharvested for their shells. Before the era of plastic, they were collected and cultivated by the millions to satisfy a commercial demand for buttons. Even more damaging was the spread of human development and environmental degradation. Rivers were dammed for power. Streams were diverted for agriculture. Wetlands were paved for housing. All this continues today, imperiling far more than freshwater mussels.

A recent report by the United Nations found that human practices have put roughly 1 million species at risk of extinction, many within decades.

1 Million Animal And Plant Species Are At Risk Of Extinction, U.N. Report Says

"The essential, interconnected web of life on Earth is getting smaller and increasingly frayed," wrote Josef Settele, a German biologist and co-chair of the report. "This loss is a direct result of human activity and constitutes a direct threat to human well-being in all regions of the world."

Richard, who says the report should be a wake-up call, says there are worrisome similarities between the plight of the freshwater mussel and the greater global extinction crisis.

"It's just subtle enough that species are slipping away without anyone really noticing. A species here and a species there," he says. "But over time that becomes 10, and 100, and 1,000 species here and there until you're left with this husk of the biodiversity you had before." 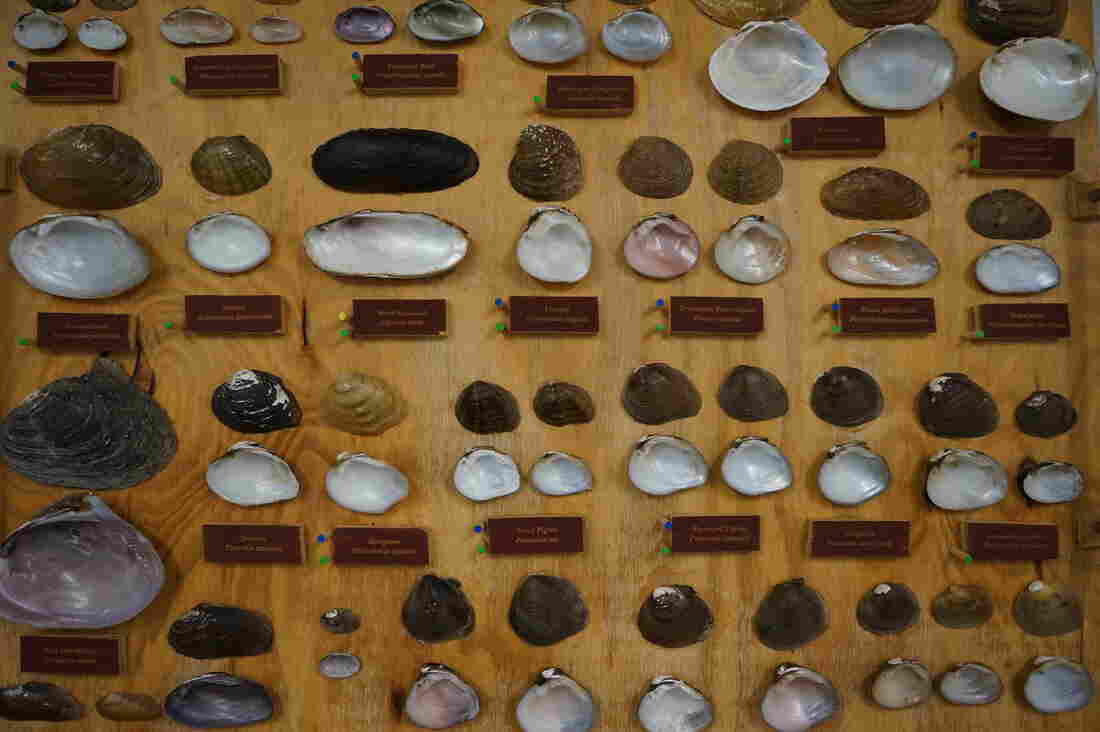 At first, biologists investigating the cause of the freshwater mussel die-off suspected human activity — contamination or pollution. Rivers and streams in the coal seam-striped southern Appalachian Mountains have a long history of environmental degradation. But pollution tends to be indiscriminate, and not every species is being affected.

In the Clinch River, it's the most abundant mussel species, Actinonaias pectorosa — the large, gold-brown colored pheasantshell — that's hardest hit. At one monitoring site, almost 90% of the population was lost in the year after the die-off was first discovered.

"It is weird to keep finding dozens or hundreds of dead pectorosa and other species look like they're doing just fine," says Rose Agbalog, another Virginia-based biologist with the USFWS. 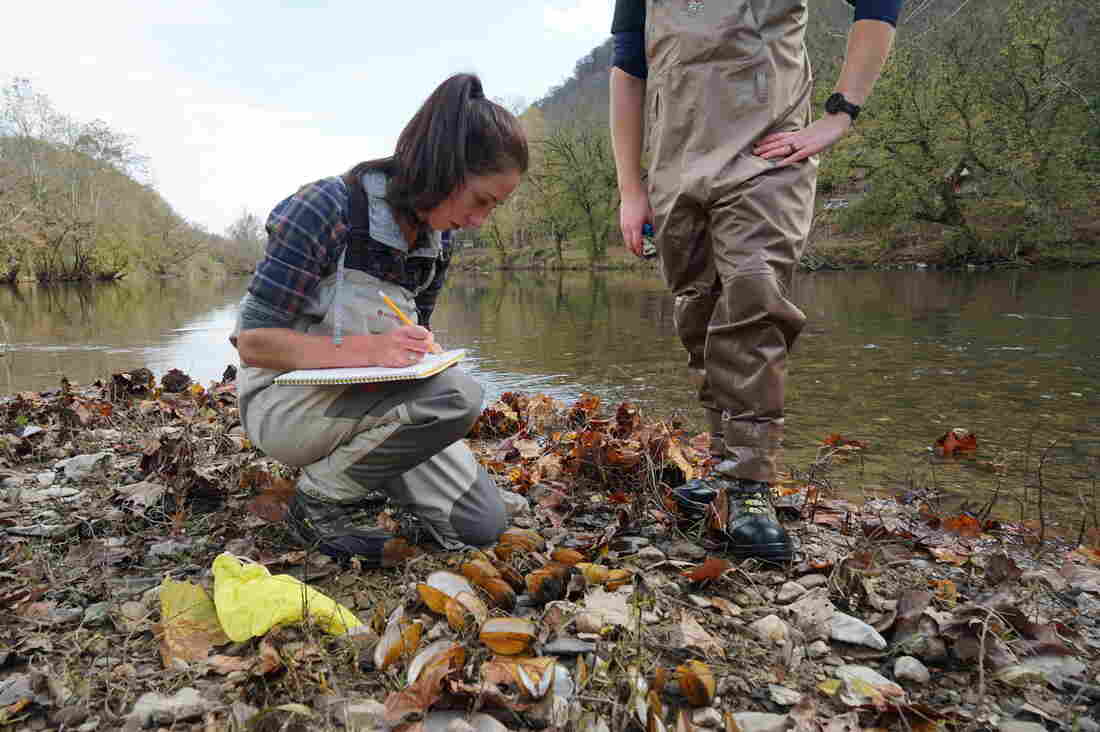 Agbalog documents the number and types of dead mussel species she finds during a brief survey on the Clinch River. On particularly bad days, hundreds of shells line the banks. Nathan Rott/NPR hide caption

To some researchers, the species-specific nature of the die-off suggests another cause: disease.

A human-spread pathogen is responsible for the ongoing "amphibian apocalypse," which has hurt more than 500 species. Scientists are looking at a virus and gut parasite that have been associated with bee colony collapse. White-nose syndrome, which has decimated North America's bats, is caused by a fungus.

Epidemiologists and other researchers from the University of Wisconsin and the U.S. Geological Survey have been testing mussel samples, sent in from the Clinch and other affected sites, for genetic, viral and bacterial irregularities — a challenge made more difficult by a dearth of information on regular mussel pathology.

The scientists have found a novel virus and a bacterium that are "statistically associated" with the dying mussels compared with control groups, but nobody is willing yet to label either the culprit. There's still too much uncertainty.

"That's the hard part," Richard says. "There's a million things it could be, and we only have so much money and time to find out." 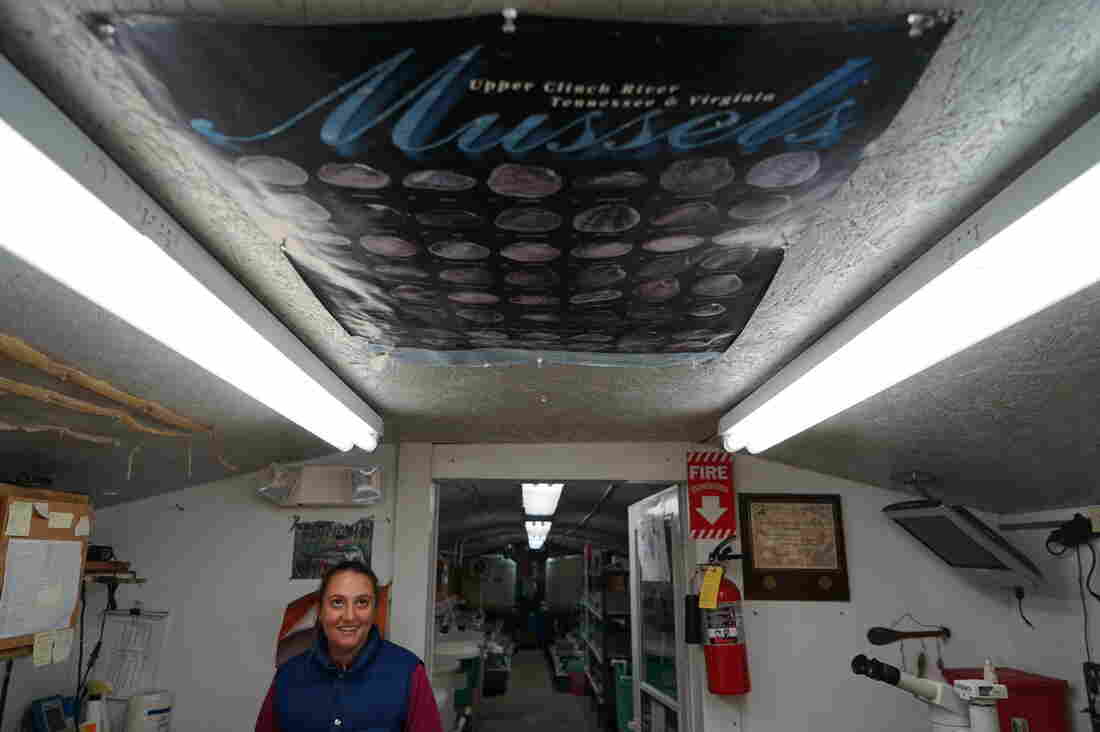 Mussel recovery specialist Sarah Colletti says the diversity of freshwater mussel species on the Clinch River is special. "It's like having the last rhino in your backyard," she says. Nathan Rott/NPR hide caption

Given those challenges, the team is leaning into a contingency plan that nobody wants to depend on. Nestled in a shallow Appalachian valley, near the banks of the South Fork Holston River, a fish hatchery now serves as a nursery for freshwater mussels. It's home to some of the rarest species in North America.

In two long buildings, humming with running water and pumps, biologists with the Virginia Department of Game and Inland Fisheries are raising thousands of freshwater mussels in sand-filled pans — mussels that, when mature, will be brought out to supplement the sputtering populations that still exist in the wild.

One pan of the federally protected golden riffleshell "probably holds more than naturally still live in the creek," says Tim Lane, Virginia's southwest region mussel recovery coordinator. "It makes me nervous even looking at it." 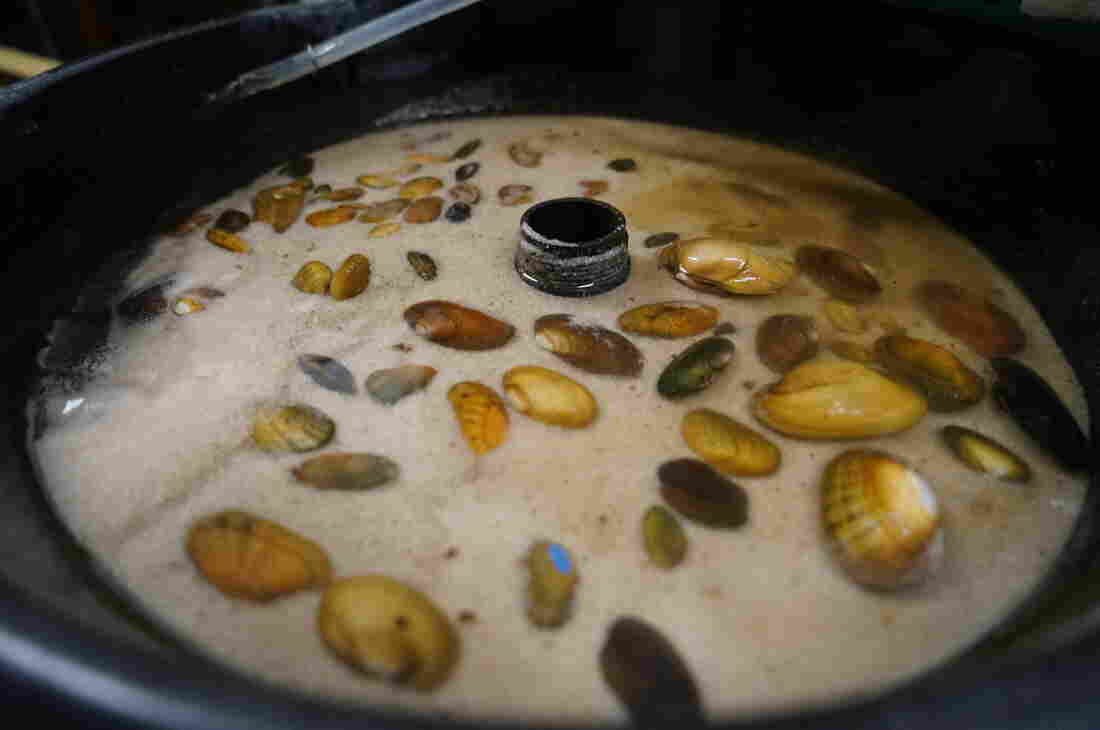 When the recent die-off was first detected, Lane and other mussel specialists raced to the upper stretches of the Clinch River to collect healthy adult pheasantshells. Those mussels are now serving as a baseline, normal specimens to compare to the sick, but they're also being seen as a backup.

"If this thing continues, at least we've got this other basket of eggs upstream so it's not all a loss," Lane says. 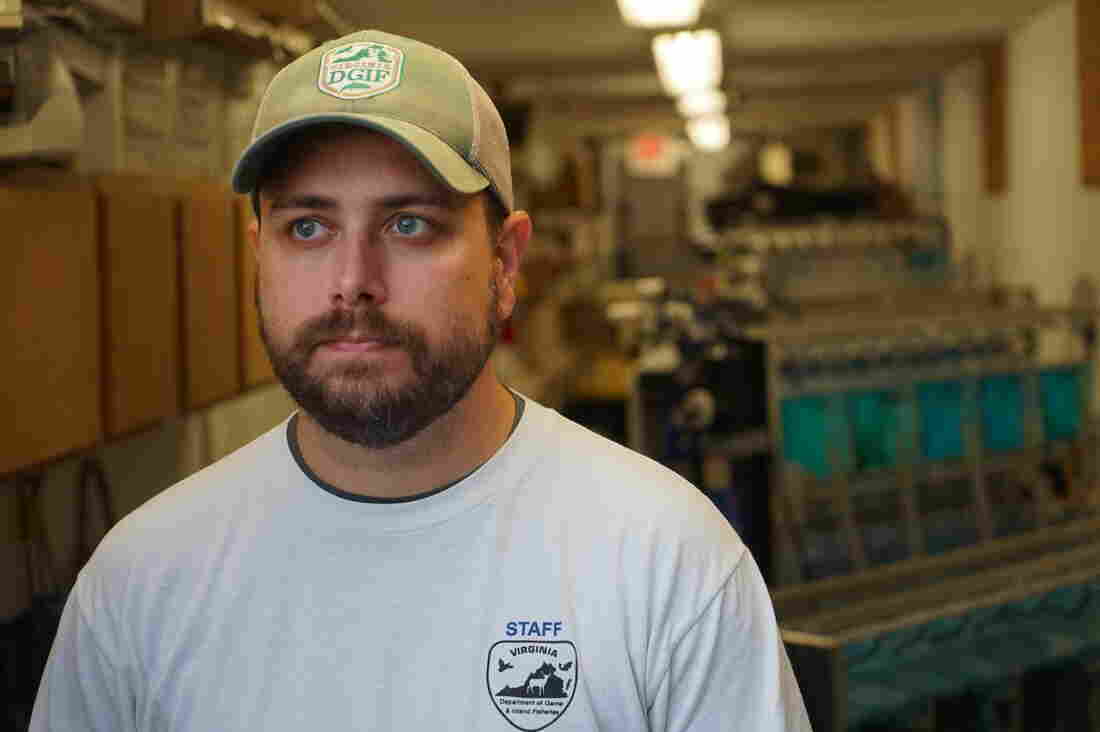 The idea is that someday biologists could repopulate parts of the Clinch River with pheasantshells.

It's an imperfect solution. Freshwater mussels have existed in these ecosystems for thousands of years, evolving to mimic intricate fish. They are the ultimate angler, Lane says, perfectly adapted to an ecosystem that humans could never re-create.

"Nature is so complex. Biology is so complex," he says. "We do not understand how important some things are until they're gone." 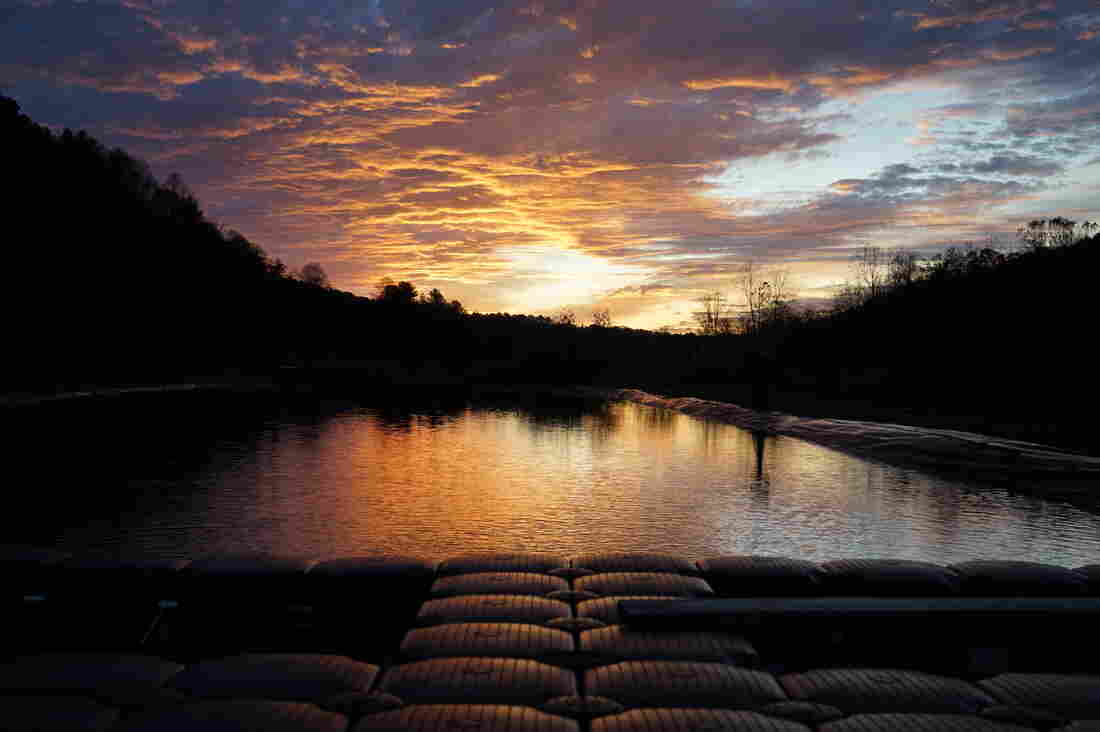 The sun sets over a pool of water at Virginia Department of Game and Inland Fisheries' freshwater mussel hatchery. More mature mussels are being raised in these exposed waters. Nathan Rott/NPR hide caption