Accessibility links
Who Should Get Free College? Buttigieg Ad Inflames Key Divide Among Democrats Buttigieg has criticized plans that make public college "free for even the kids of millionaires," opening up an argument in the Democratic primary campaign over the role of government.

Who Should Get Free College? Buttigieg Ad Inflames Key Divide Among Democrats

Who Should Get Free College? Buttigieg Ad Inflames Key Divide Among Democrats 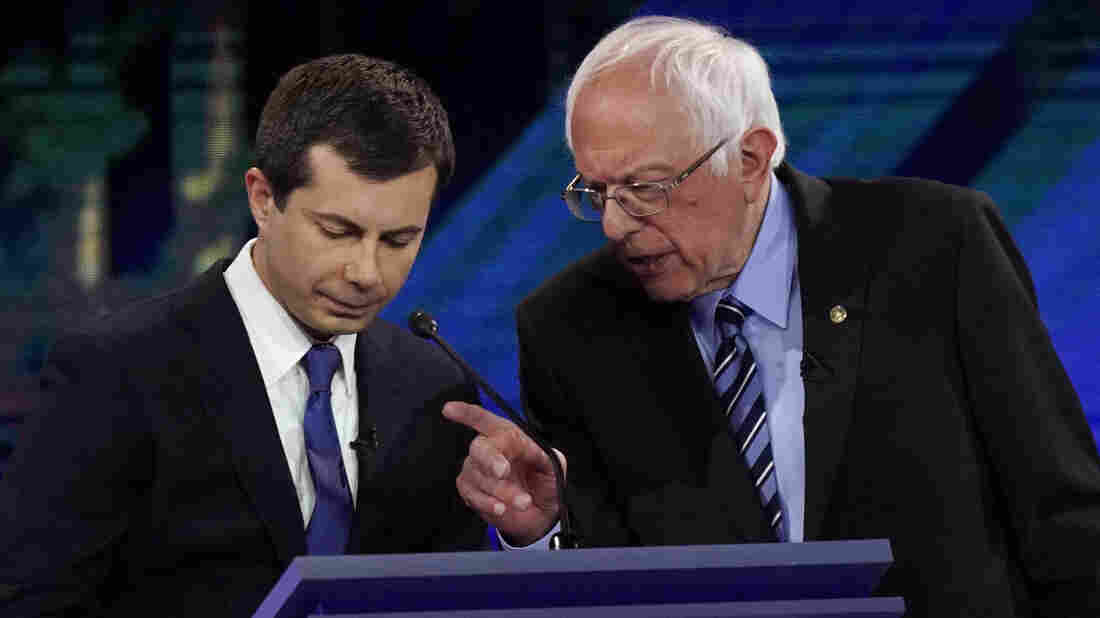 Democratic presidential candidates Pete Buttigieg (left) and Bernie Sanders have taken differing positions on how comprehensive free college plans should be, which gets at a philosophical difference over the role of government assistance. David J. Phillip/AP hide caption 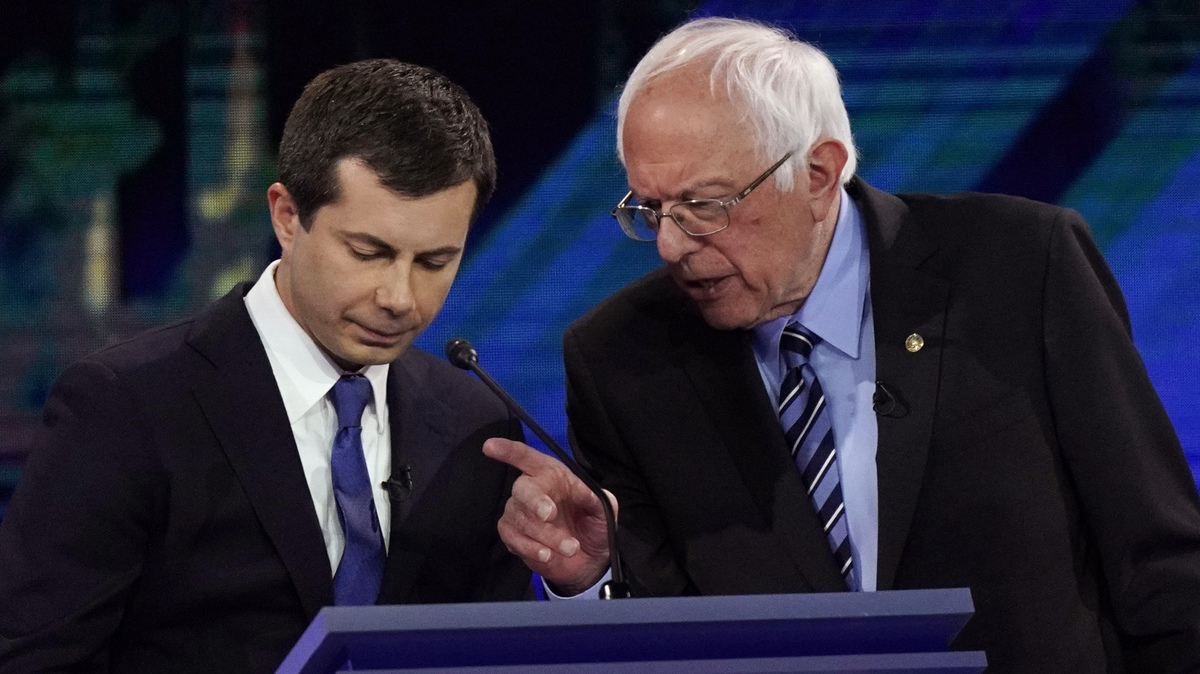 Democratic presidential candidates Pete Buttigieg (left) and Bernie Sanders have taken differing positions on how comprehensive free college plans should be, which gets at a philosophical difference over the role of government assistance.

The divide among Democrats over "Medicare for All" has dominated the policy conversation in the 2020 Democratic primary. But another rift has opened among Democrats, this one about college affordability. The question: Who should get to go to college for free?

New Pete ad in Iowa taking aim at Warren and Bernie over college affordability/debt (but not by name), arguing they’d alienate half the country by insisting it be “free even for the kids of millionaires”. H/t @McCormickJohn
pic.twitter.com/SEAcOdHcAq

Buttigieg's ad amplified a point he has made before. And Rep. Alexandria Ocasio Cortez, D-N.Y., who recently endorsed Sanders, responded in a Twitter thread assailing Buttigieg for, as she put it, repeating a "GOP talking point used to dismantle public systems."

"Universal public systems are designed to benefit EVERYBODY!" she wrote. "Everyone contributes & everyone enjoys. We don't ban the rich from public schools, firefighters, or libraries bc they are public goods."

This is a GOP talking point used to dismantle public systems, & it’s sad to see a Dem candidate adopt it.

Let’s talk about why Republicans are wrong on this.

Just like rich kids can attend public school, they should be able to attend tuition-free public college.

Buttigieg's plan would offer tuition-free college to most students at public four-year colleges, but it would taper off those benefits for people from higher-earning families.

That kind of means-testing is a selling point to Buttigieg and his supporters. But for proponents of free public college for all, like Ocasio-Cortez, it is a sign that he has a fundamentally different idea from them of what governing should look like.

What The U.S. Can Learn From Free College In Chile

All of the top-tier presidential candidates agree that college affordability is a problem. And they all offer some form of free higher education that is more generous than what is currently offered.

Broadly speaking, Sanders and Warren have similar (but by no means identical) plans: Both proposed free public college and community college, along with more Pell Grants, to help students pay for other college-related expenses. In addition, they both want to cancel massive amounts of student debt — all of it in Sanders' case, and much of it in Warren's case.

Meanwhile, former Vice President Joe Biden and Minnesota Sen. Amy Klobuchar have (again, somewhat similar but not identical) more moderate plans. They both propose tuition-free community college. In addition, they both want to beef up Pell Grants and strengthen or expand programs to help people repay their student loan debt.

Even When College Is Free, It Can Be Hard For Adults To Stay In School

Buttigieg's plan stakes out a middle position between those two wings. It would make public college free for all students from families earning up to $100,000 annually. It would also offer assistance for families earning more than that, phasing out at $150,000. In addition, he would take steps to help people deal with debt, like automatically enrolling debtors in income-based repayment programs and expanding public service loan forgiveness programs.

There are a few main points of the argument against free college, as voiced by Buttigieg and Klobuchar in particular.

Buttigieg also has emphasized, both in his ad and on the campaign trail, that he doesn't believe in making college "free for even the kids of millionaires."

The argument here is simple: that government funds should be targeted at people who need them most.

Relatedly, Klobuchar has long cast free college as impractical and as an unwise use of money.

"If I was a magic genie and could give that to everyone and we could afford it, I would," she said at a February CNN town hall. "I'm just trying to find a mix of incentives and make sure kids that are in need — that's why I talked about expanding Pell Grants — can go to college and be able to afford it, and make sure that people that can afford it are able to pay."

Buttigieg highlights another point in pitching his college plan. "We can gather the majority to drive those big ideas through without turning off half the country before we even get into office," he says in his recent ad.

This makes the fight over free public college a microcosm of a central Democratic argument over electability: whether it's better to propose sweeping, progressive plans that might electrify some voters or to stick to less ambitious plans, for fear of turning off more moderate voters.

Finally, Buttigieg has stressed that college isn't necessary for everyone.

Who would benefit from free college?

A big part of the debate over free public college for all is about who exactly would benefit from any of these programs.

Buttigieg, for example, has derided free college for all as a giveaway to the children of "millionaires."

But then, Roosevelt Institute Senior Fellow Mike Konczal (in a blog post highlighted by Slate's Jordan Weissmann) tried to approximate how much of a giveaway it would be and found that people in the top 1% would receive roughly 1.4% of the benefit of the plan. That's because the rich are more likely to send their kids to private schools, which are not covered under the Warren and Sanders plans.

Konczal wrote that he considers that a "worthwhile trade off," given that under Warren and Sanders' plans, the rich would also be financing free college.

But then — and perhaps more to the point — the difference between Buttigieg's plan, which would benefit kids from families earning up to $150,000, and free college for all, is not at all just about the hyper-rich. After all, many people earning over $150,000 may be comfortable, but are nowhere close to millionaires.

"I think where the distributional debate really is is about the middle, upper-middle class," said Matthew Chingos, vice president for education data and policy at the Urban Institute. "There's a real debate over a family of four making $125,000 — should they have to pay something? And that's obviously more of a philosophical question than a policy question."

Indeed, Chingos' Urban Institute colleagues Sandy Baum and Alexandra Tilsley have found that, compared to the status quo, free public-college tuition would give more of a benefit to higher-income students. That's because lower-income students currently pay less for college. (That said, the Pell Grant expansions some candidates propose would pay for expenses beyond tuition to further reduce costs for lower-income students.)

One more criticism of means-testing college by income is that income alone often doesn't paint a full picture of a family's financial situation.

A debate over what government should do

While Huelsman is a proponent of free college for all, he points out that practically, there may be less distance between Buttigieg and Sanders or Warren's free-college plans than many of their supporters may realize.

"We are at the point in the debate where people are trying hard to highlight the differences in what are some similar plans," he says.

'A Game Changer': Andrew Yang Explains How He'd Give Every American $1,000 Per Month

For example, Buttigieg's team estimates that his plan would offer free public four-year college to 80% of students, and assistance to an additional 10%.

"You're arguing about whether to cover most families or all families, not whether free college is a worthy concept," Huelsman said.

But the debate over free college is not just about practicalities; it's about a philosophical divide that Ocasio-Cortez's tweets highlight (and that Weissmann also highlighted): What should government's role in people's lives be?

Warren also emphasized this point in rolling out her free-college plan.

"We must ensure that we never have another student debt crisis again," she wrote in a blog post. "We can do that by recognizing that a public college education is like a public K-12 education — a basic public good that should be available to everyone with free tuition and zero debt at graduation."

Could it even pass?

All of this debate elides the fundamental questions of how feasible such sweeping programs might be.

On the one hand, free public college is much less of a fiscal burden than other sweeping plans being debated in this primary. For example, Warren's team estimates that her free-public-college plan would cost about $610 billion over 10 years. Compare that to her Medicare for All plan, which her team thinks would require $20.5 trillion in new spending over 10 years.

Still, that doesn't really say much about its chances of getting through Congress and to a president's desk, said Beth Akers, a senior fellow at the right-leaning Manhattan Institute.

"I think it's important to remember that this is a conversation happening in a Democratic primary, but once we get back to national politics, it's very unlikely that any plan like this would be able to pass the Senate," she said.

A previous version of this story misspelled Alexandra Tilsley's last name as Tisley.