Accessibility links
Why Did Trump Delay Security Aid To Ukraine? There are lots of reasons U.S. foreign aid can be held up or frozen. There's even a law that governs the issue. But many experts say what happened over the summer with Ukraine is highly irregular. 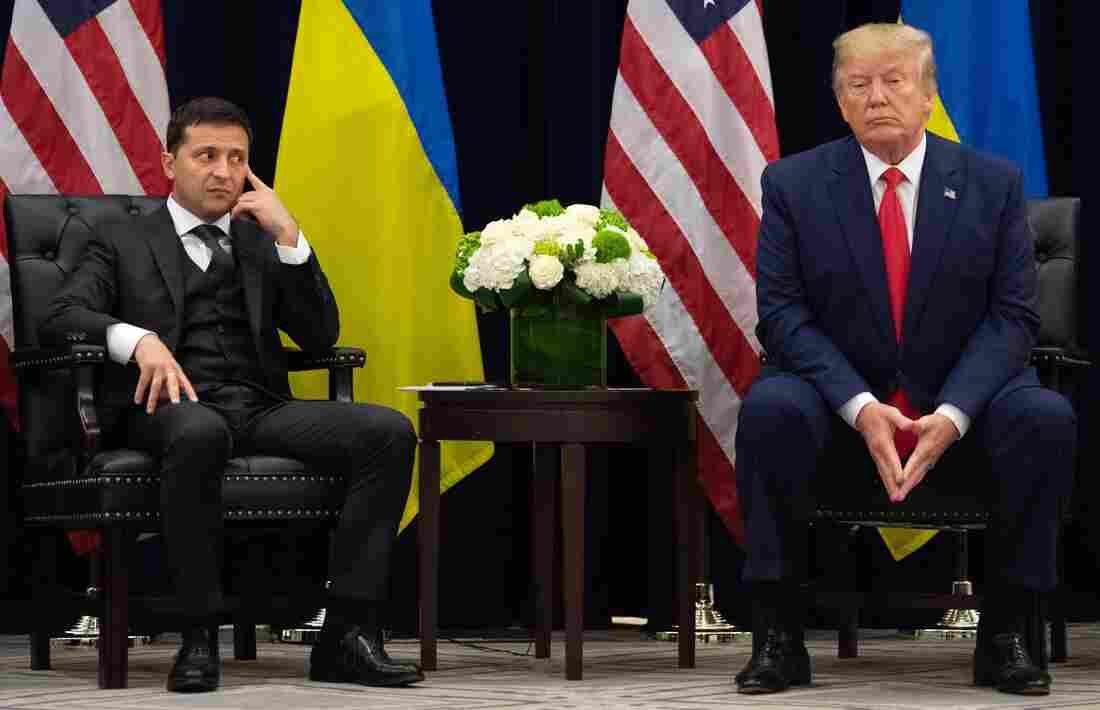 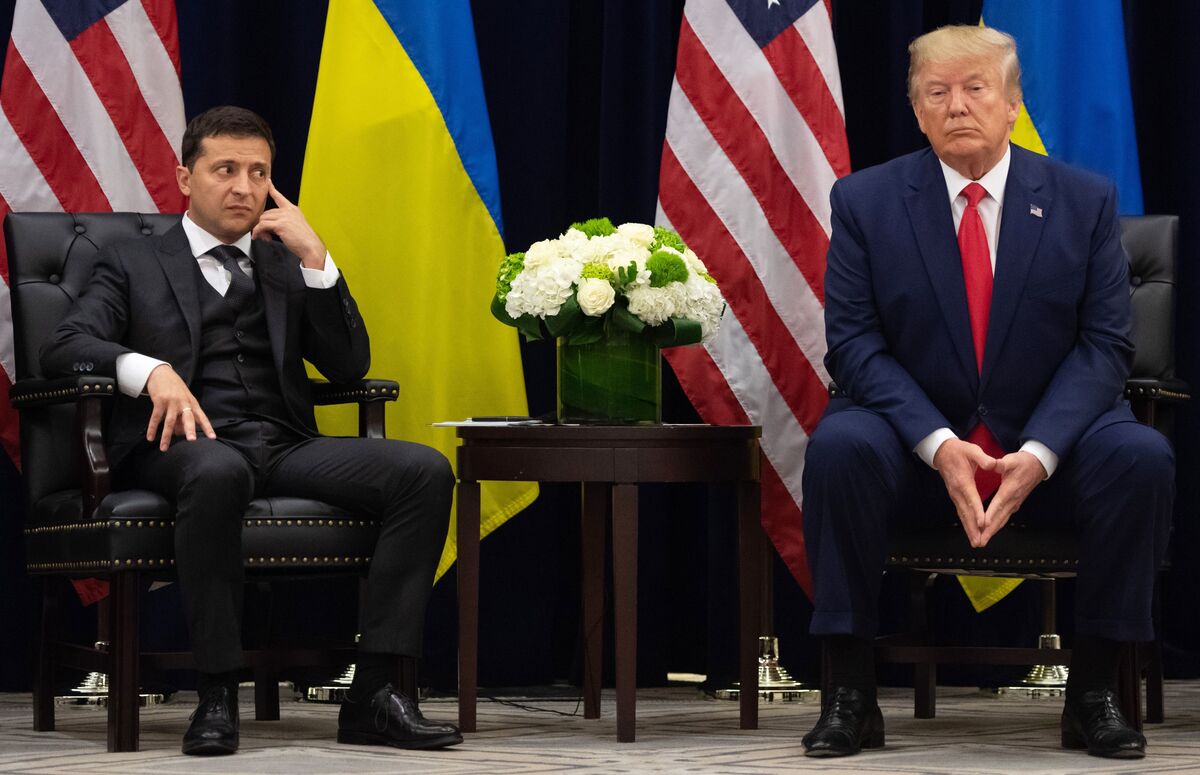 Why the Trump administration delayed nearly $400 millions of dollars in security aid to Ukraine is the question at the heart of the impeachment inquiry into President Trump.

Democrats say the president tried to coerce an ally to help him take down a political opponent. Republicans argue it's a routine use of presidential power.

Interviews with current and former officials show how the Trump administration's hold-up of aid to Ukraine was irregular and likely violated U.S. law, and has far-reaching consequences at home and overseas.

Tim Rieser, who has decades of experience with foreign aid, had a front row seat to the process that unfolded this summer. He is a staff director of the Senate subcommittee that handles funding for State Department programs. He also serves as senior foreign policy adviser to Democratic Sen. Pat Leahy of Vermont.

Rieser usually works behind the scenes advising lawmakers. His Republican counterparts on the House and Senate committees declined to speak with NPR.

"They can't just simply decide even though Congress appropriated money for X, we're going to spend it for Y," he explains.

The way the process typically works, Rieser says, the White House can ask for a delay or to halt funding altogether — but it has to tell Congress.

"We recognize that things do change. Elections happen, governments are overthrown. Policies fail, and it makes sense to revisit them," Rieser says. 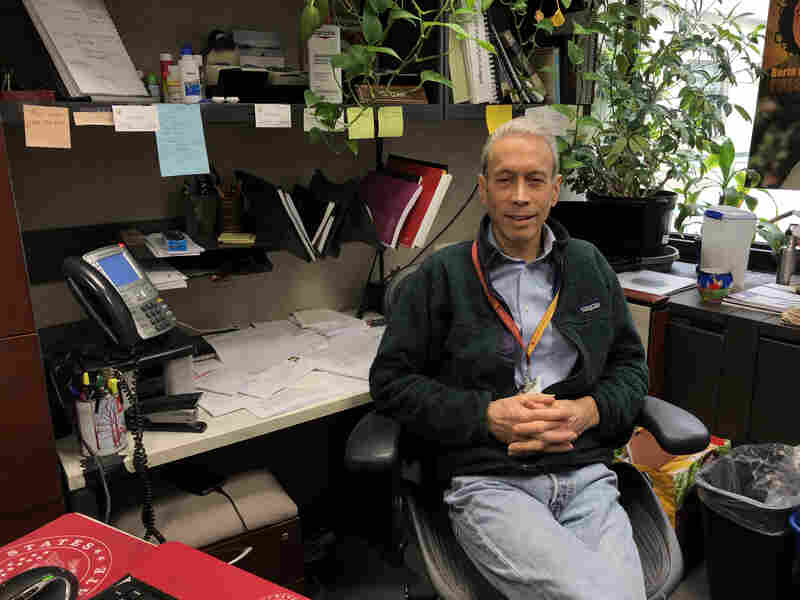 Tim Rieser is the Democratic clerk for the Senate Appropriations Subcommittee on the Department of State and Foreign Operations. The White House "never expressed concerns to us about corruption in Ukraine, or frankly anywhere," he says. Sam Gringlas/NPR hide caption 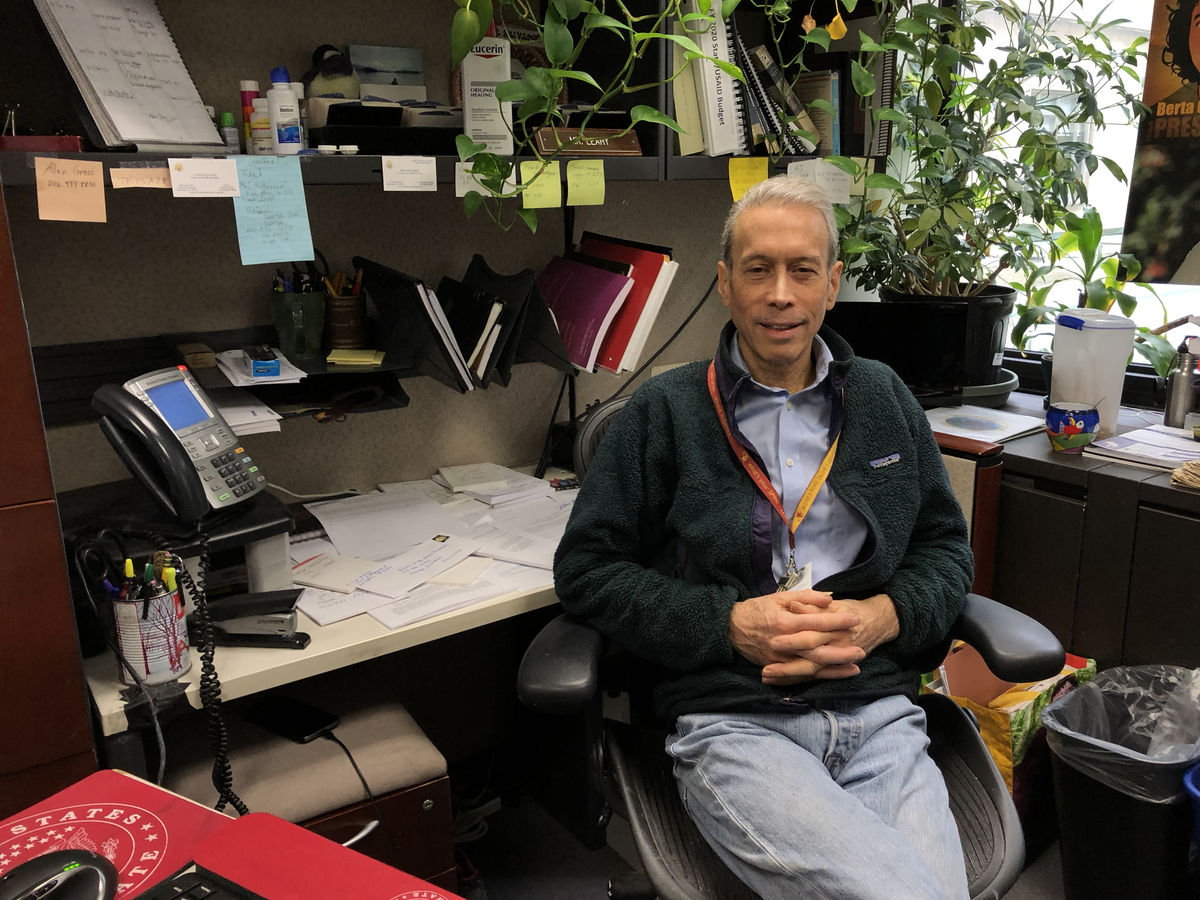 Tim Rieser is the Democratic clerk for the Senate Appropriations Subcommittee on the Department of State and Foreign Operations. The White House "never expressed concerns to us about corruption in Ukraine, or frankly anywhere," he says.

Meanwhile, although the Defense Department had certified that the country was making good on anti-corruption benchmarks, the some $250 million in security assistance the Pentagon had slated for Ukraine hadn't gone through.

Rieser wondered if that meant State Department aid to Ukraine — another $140 million or so — might be frozen as well. Turns out, it was.

When it comes to congressional funds, it's "use it or lose it." So when September arrived, the White House was skirting close to the deadline by which they were legally required to alert Congress to an official reason for the freeze.

Then, someone filed a whistleblower complaint.

The White House released the funds shortly after, on Sept. 11. And by the end of the month, that complaint was public.

In October, Trump explained the delay this way: "We have an obligation to investigate corruption. And that's what it was."

Rieser says this is actually part of a broader trend with the current administration. Trump White House budgets consistently tried and failed to slash foreign aid. And the president is not afraid to use diplomatic assistance as leverage.

For instance, when the president worried about migrant caravans at the border, he stopped payment to Honduras, Guatemala and El Salvador earlier this year.

"We were paying them tremendous amounts of money," Trump said in April. "And we're not paying them anymore. Because they haven't done a thing for us."

But Rieser says the delay on aid to Ukraine was unusual because it involved military assistance that had bipartisan support.

And after seeing the notes from President Trump's phone call in which he asked Ukrainian President Volodymyr Zelenskiy for a "favor," Rieser says it was clearly "fundamentally different" from other situations.

"It was to try to obtain information that could be advantageous in a political campaign, which has nothing to do with U.S. foreign policy or national security," Rieser says.

The Hold On Ukraine Aid: A Timeline Emerges From Impeachment Probe

He doesn't buy the idea that Trump's team was essentially vetting the new Ukrainian leader.

"It was laughable. They've never expressed concerns to us about corruption in Ukraine, or frankly anywhere," Rieser says. "To the contrary, we've watched as they've welcomed to the White House, leaders who are known to be corrupt and ruthlessly repressive."

There are ways for a White House to express concerns about corruption. And Trump's isn't the first Republican administration skeptical of how foreign aid is spent.

In 2002, President George W. Bush announced the Millennium Challenge Account, an initiative to monitor and score countries who received special grant funding from the U.S.

"We documented over 200 instances of anti-corruption reforms that were encouraged or otherwise incentivized by the U.S. government," he says. "And I'm not aware of a single instance in which the U.S. government made an ask for a government to investigate or prosecute a particular politician for abuse of power."

Today, Parks runs AidData — a research lab at the College of William and Mary that tracks foreign aid more broadly.

Over the last 15 years, he says, the U.S. has developed a framework for withholding foreign aid — especially those struggling with corruption.

In 2005, for instance, the U.S. withheld aid from Yemen when the country appeared to be backsliding on reforms. But everyone — Congress and the White House — was in agreement.

"And they would ensure that all the different parts of the U.S. government are singing from the same sheet of music," Parks says, "trying to reinforce the importance of funding anti-corruption agencies and safeguarding the independence to investigate abuses of power without fear or favor." 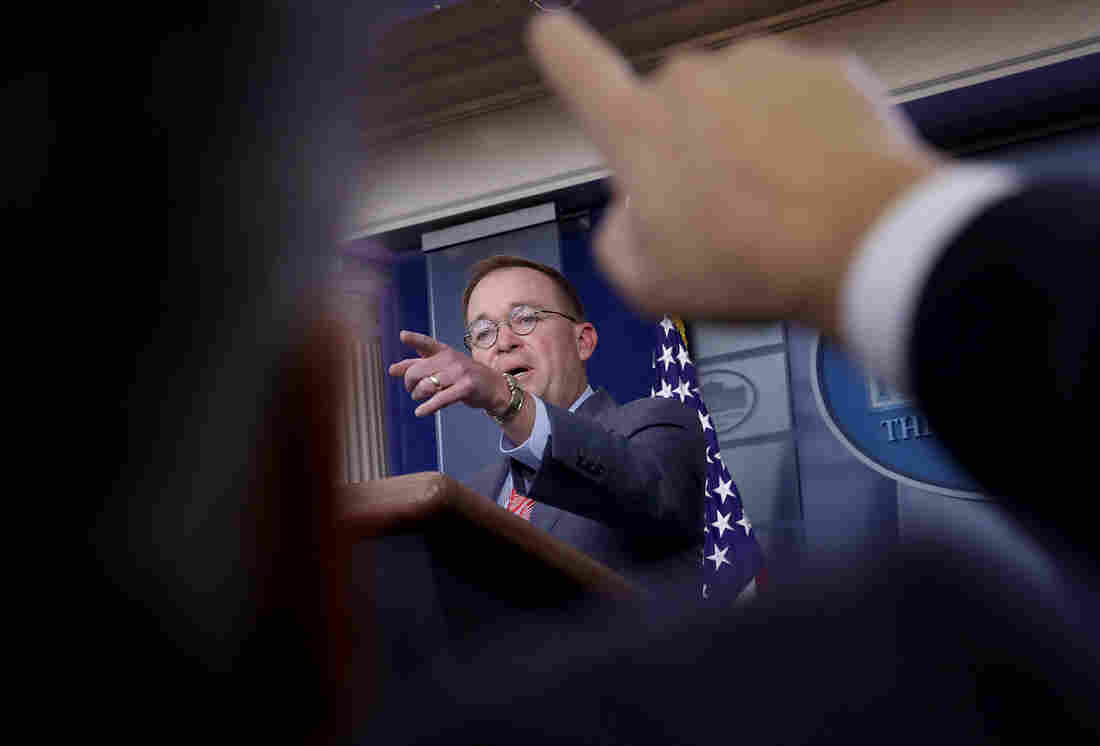 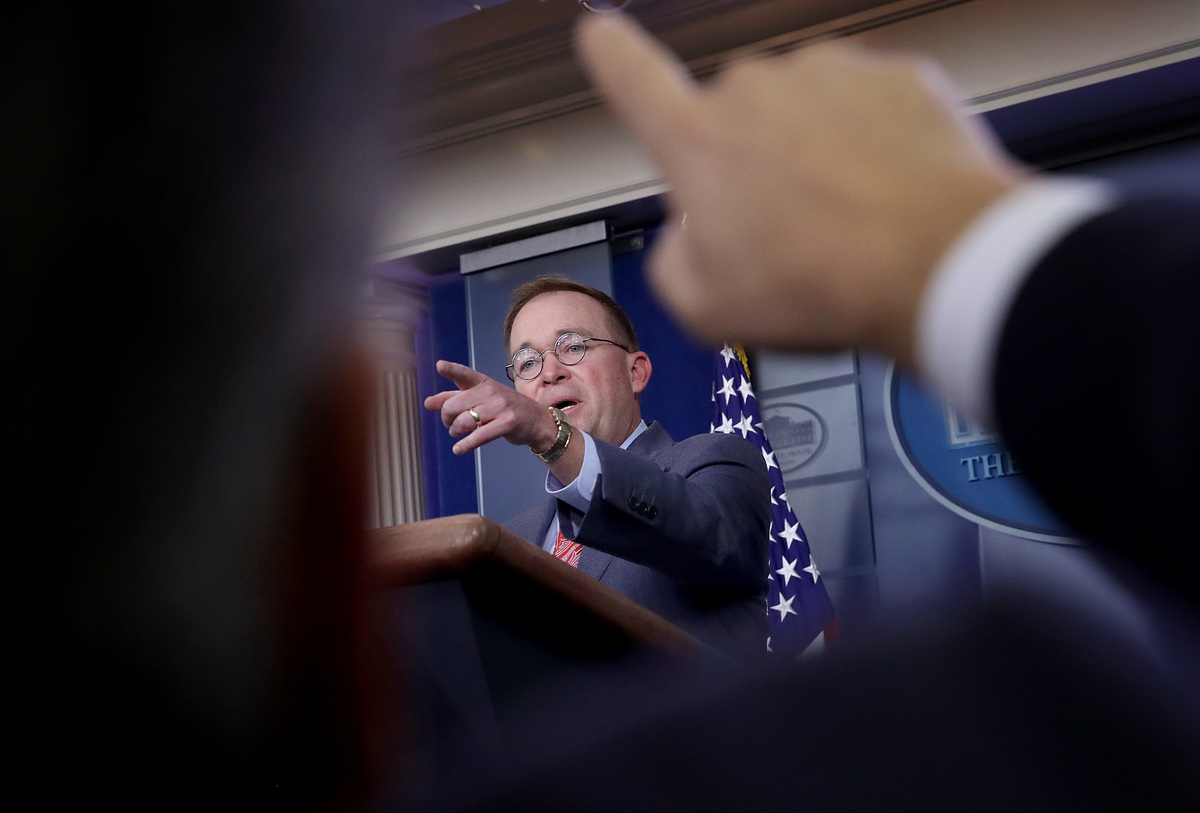 "One of the things I'm paying close attention to, is whether the signal that other countries around the world will get, is that the U.S. is principally concerned with strength of anti-corruption policies, or if parts of the U.S. government use anti-corruption institutions as tools to be used for very specific political purposes — which could undermine efforts underway for better part of the last decade to encourage clean government."

That's why a press conference held in October by Mick Mulvaney, the acting White House chief of staff and director of the Office of Management and Budget, raised alarms.

When asked whether it was a quid pro quo for the White House to hold up aid unless Ukraine agreed to launch an investigation that might help Trump politically, Mulvaney replied: "We do that all the time with foreign policy. ... Get over it. There's going to be political influence in foreign policy."

Sam Berger was among those who were shocked by Mulvaney's comments.

Berger used to work as a lawyer for OMB under the Obama administration.

From his perspective, the White House did violate the budget law by delaying assistance to Ukraine. (OMB did not respond to NPR's request for comment.)

Berger says if you look at the testimony from OMB officials during the impeachment inquiry, they say staffers raised concerns about the freeze on Ukraine aid. Two quit, in part because of it.

What Did OMB Know About Trump's Order To Freeze Ukraine Aid?

What Did OMB Know About Trump's Order To Freeze Ukraine Aid?

As for the White House, Berger says, it had a political appointee sign off on the Ukraine aid delay through the summer.

For Berger, this shows the "irregular process" undertaken to "route around career officials."

"It's not that the violation of the budget law itself is an impeachable offense. But it's what it was used for," he continues. "It was used to extort a foreign power to interfere in our elections."

Extortion. Bribery. These are the terms that can land a president under threat of impeachment.

But Andrew Natsios, a Republican who headed USAID during the George W. Bush administration, says he does not think that is what Trump has done.

Now at Texas A&M University, Natsios says there are plenty of times he's disagreed with how Trump handles foreign aid — like withholding support for those Central American countries over migrant policies.

"Did he have the right to do it? Absolutely," Natsios says. "Was it wise policy? Absolutely not."

When it comes to the Ukraine aid, Natsios says a crucial factor is the president's intent. Was the hold on assistance used to personally benefit him?

"You can't just say you think he did that for this purpose. He can argue, which is what he's been doing, that he was worried about the level of corruption in the Ukrainian government. You can be skeptical about his reasoning," he says. "But that is a legitimate question. Whether he had other motives for doing it is a debatable question. Is it impeachable? I don't think so."

Ultimately, though, that's for the Senate to decide.

Sam Gringlas produced and Courtney Dorning edited this story for broadcast. Maureen Pao edited the story for the web.