Accessibility links
UPS Truck Hijacking: 4 Dead, Including 2 Innocent Civilians Police officers in South Florida exchanged gunfire with two armed robbers Thursday. The resulting skirmish ended with both suspects dead, along with a hostage and a bystander. 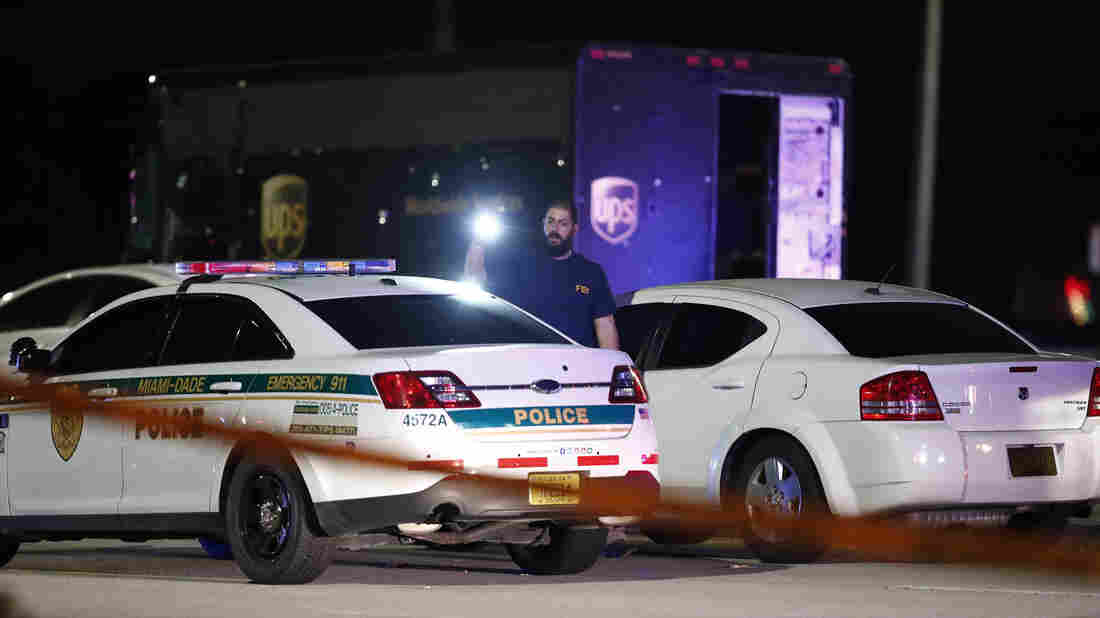 An FBI official at the scene of a shooting, Thursday in Miramar, Fla. Four people, including a UPS driver, were killed in the shootout between the armed robbers and police authorities. Brynn Anderson/AP hide caption 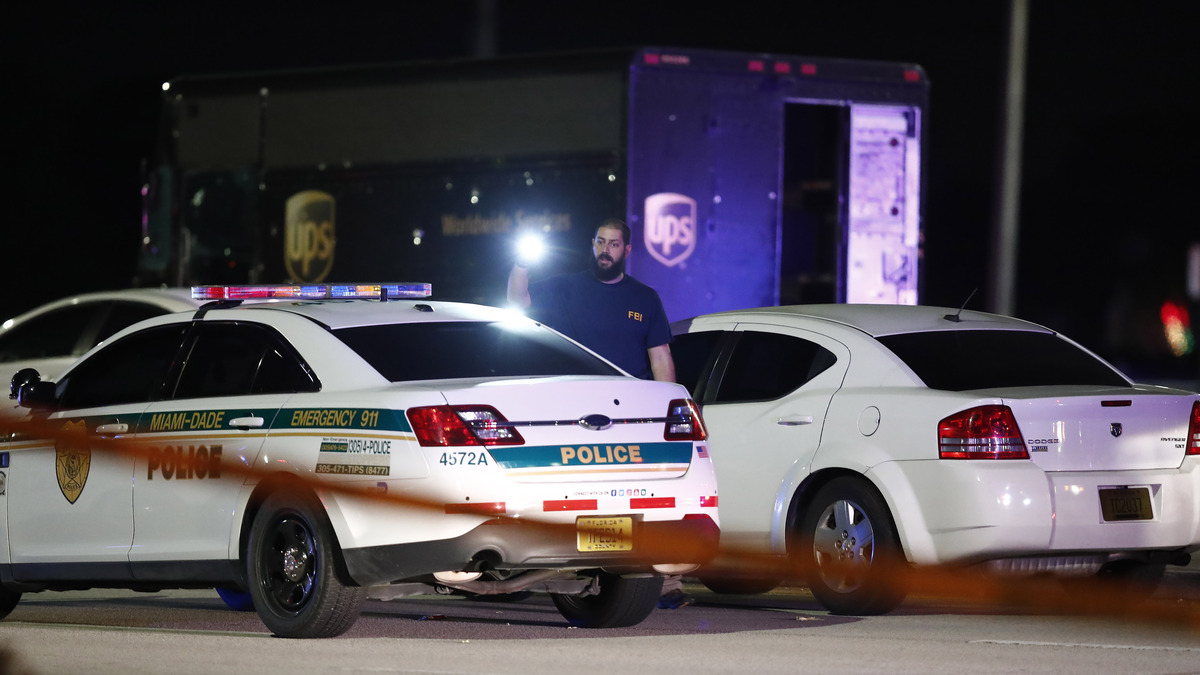 An FBI official at the scene of a shooting, Thursday in Miramar, Fla. Four people, including a UPS driver, were killed in the shootout between the armed robbers and police authorities.

A pair of armed robbers and two others, including the driver of a hijacked UPS truck, were killed in an exchange of gunfire with South Florida police officers after the suspects led authorities on a high-speed chase.

The robbers held up a jewelry store on Thursday before commandeering the UPS truck and holding its driver hostage, according to Coral Gables Police. After fleeing the scene and evading police for dozens of miles, the truck stopped in the middle of rush-hour traffic as armed officers surrounded it.

"There was exchanged fire between law enforcement and the suspects, and unfortunately, the suspects are now deceased," George Piro, the special agent in charge of the FBI's Miami office, said. "But two additional innocent civilians were also deceased."

The FBI identified the slain robbers and hijackers as Lamar Alexander, 41, and Ronnie Jerome Hill, 41, both of Miami-Dade County.

Also killed were UPS driver Frank Ordonez, who was taken hostage, according to a tweet from the company, and Richard Cutshaw, who was driving home from work, according to the CNN, citing the Broward County medical examiner office.

A total of 19 officers fired at the truck, according to NBC Miami. In one video, a person caught between the UPS truck and law enforcement captured recorded the shootout from inside their vehicle.

"We are deeply saddened to learn a UPS service provider was a victim of this senseless act of violence," the package delivery company said. "We extend our condolences to the family and friends of our employee and the other innocent victims involved in the incident. We appreciate law enforcement's service and will cooperate with the authorities as they continue the investigation."

The incident quickly sparked criticism of law enforcement's handling of the situation.

This hurts my heart so bad. They seemed to have killed an innocent UPS driver. Why in the world are you shooting up the whole vehicle on both sides if you know there’s a hostage inside!? https://t.co/fJReapstSY

Former Department of Housing and Urban Development official Brandon Friedman described the shootout as "appalling." He said the police department should be held accountable for "choosing to assault the vehicle in the middle of stopped rush hour traffic" and using occupied vehicles as "human shields."

The Coral Gables Police Department declined to comment, and the FBI has not responded to NPR's inquiries.

A previous version of this story incorrectly said the bystander killed in the shootout was a woman. Richard Cutshaw was the man fatally shot in the crossfire. Earlier, a woman who worked in the jewelry store was injured by a bullet.