Accessibility links
Review: 'Dead Astronauts,' By Jeff Vandermeer Jeff Vandermeer's new novel, set on a far-future, post-apocalyptic earth, follows a trio of only vaguely human astronauts through a shifting, allegorical story that jumps back and forth across time. 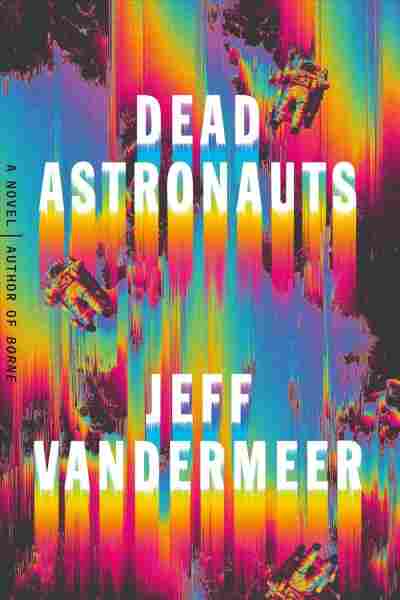 Jeff Vandermeer's latest novel, Dead Astronauts, is a kaleidoscopic and fractured mosaic: In a long-changed, post-climate-apocalypse world, a trio of saboteurs — or escapees — or simply survivors — attempt over and over again to dismantle the work of the Company, an entity which may have once been a biotech corporation but now churns out broken and altered-beyond-recognition monstrosities in an endless stream. The three — who are the closest the reader gets to protagonists in the first half of the book — are only nominally human, and only nominally astronauts. Like nearly everything else Vandermeer has created in Dead Astronauts, they are allegories, figments, fables for a dissolving world where narrative and language are as subject to corruption as modified flesh.

Their leader is Grayson, an astronaut returned to Earth who can see futures and truths out of her blinded eye. With her are Chen, who sees the world in equations and probabilities, constantly on the verge of ego-dissolution into mathematics and emotional trauma; a man who might once have been a salamander, or many salamanders, but who definitely once worked intimately for the Company — and Moss, whom Grayson loves. Moss is sometimes a woman, sometimes a person — when she wants to be, for Grayson — and always a sentient moss, splittable into many selves, charged with (or choosing) to use herself to reseed the broken world with viable life.

Grayson, Chen, and Moss traverse timestreams and world-versions, looking for an opportunity to damage the Company and the City it roosts within. They are haunted by other fabulist figures that have emerged from the shattered world's mythology: A timeskipping blue fox, sometimes an ally, never at all human; Charlie X, a scientist cursed with the face of a bat, who is both mad, an abused child, and the creator of most of the monstrosities of the book (including Chen and Moss); and most terribly of all, the dark bird, "a duck with one broken wing." This bird is a creature made for destruction, murder, and pain, born out of Charlie X's manipulation of his childhood pet, both his greatest weapon and greatest victim.

Dead Astronauts moves in shutterclicks, shifting points of view and moments in time. The experience of reading it is a compulsively absorbing confusion. Straightforward answers are not forthcoming. The reader assembles what remains of the history of Vandermeer's world by gestalt, layering snatches of imagery one on top of another. Yet the book is profoundly emotional. Each character voice is compelling, brutal, rooted in emotional experience. Dead Astronauts is capable of making a reader grieve a kaleidoscope — or a sentient moss. Or, for that matter, an enormous leviathan fish trapped in a mudflat, a tortured murderous duck, a messianic fox which refuses to countenance human wants or needs — and even Charlie X, broken and breaking.

... clarity is not the point of 'Dead Astronauts.' Ecology is, and fragmentation; connection across species, times, mentalities.

Some clarity of story does emerge in the second half of the book, where a woman named Sarah, living somewhere in the broken world's past, discovers Charlie X's journal. It has been thrown to her — or someone like her — down the timestream by Chen, in his escape from the Company. Through the journal and Sarah's less-fractured narration — she does, after all, come from a less-fractured place in the timestream — some of how Charlie X happened, and how the dead astronauts became the dead astronauts, emerges from the mosaic of the book like a fossil being carved out of the earth.

But clarity is not the point of Dead Astronauts. Ecology is, and fragmentation; connection across species, times, mentalities. For Grayson, Moss, and Chen, what will survive of us is love; for the dark bird and Charlie X, enough understanding to obtain release; and for Sarah and the blue fox, a sort of future, a new narrative form, a world not remade but begun again.