Accessibility links
Opinion: This Art Is Bananas A banana taped to a wall was sold for $120,000 as a piece of art. NPR's Scott Simon wonders how it makes people think about the passage of time. 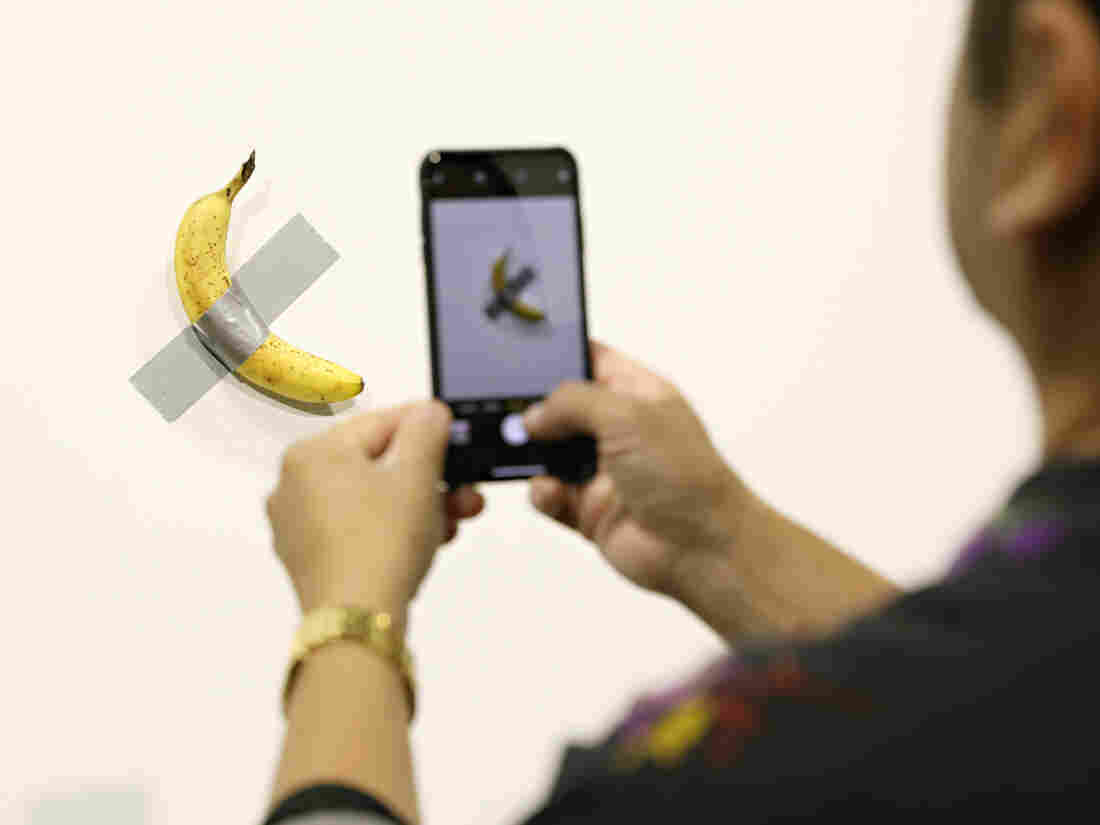 Two editions of Maurizio Cattelan's Comedian, a banana duct-taped to a wall, have reportedly sold for more than $100,000. Cindy Ord/Getty Images hide caption Two editions of Maurizio Cattelan's Comedian, a banana duct-taped to a wall, have reportedly sold for more than $100,000.

If it has been put there by the right artist.

This banana was duct-taped to a wall by Maurizio Cattelan, the Italian artist, and it's on display this week at Art Basel in Miami Beach.

The banana is real, by the way, not a sculpture. It will soon go brown, slimy, and may already be ... fragrant.

The Perrotin art gallery of Paris has already sold this piece of produce, and it turns out that $120,000 is practically a bargain. Another banana the artist taped to a wall is going for $150,000.

The artwork is titled Comedian. Emmanuel Perrotin, the art gallery's owner, told CNN that bananas are "a symbol of global trade, a double entendre, as well as a classic device for humor." Though slipping on a $120,000 banana peel doesn't sound all that amusing.

Maurizio Cattelan is a kind of art satirist. He makes artworks, not arguments. As he mused in a rare phone interview with The Washington Post a couple of years ago, "What's the point of our life? Everything seems absurd until we die and then it makes sense."

One of his sculptures, The Ninth Hour, shows Pope John Paul II holding onto his pastoral staff, being struck by a meteor. His best-known work is a probably an 18-karat gold working toilet, valued at more than a million dollars, called America — which, yes — is supposed to be a contemporary political comment. It was stolen this fall from Blenheim Palace in England.

This work may remind banana-art appreciators of Andy Warhol, who composed a gently browning banana for the cover of the 1967 album The Velvet Underground & Nico. Fans could pull back a banana-skin sticker to reveal a fleshy fruit below, which was famously suggestive for the times.

I doubt Paul Cezanne earned anything near the 19th-century equivalent of $120,000 for his masterful 1895 painting, The Basket of Apples, in which he turned spilled fruit into a picture of life's bounty.

But I don't want to sound like some finicky curmudgeon who thinks there hasn't been a truly great artist since Norman Rockwell. A banana duct-taped to a wall may not be everyone's idea of art, craft or inspiration.

But there is something absurd — and maybe delightfully so — about a banana on a wall, now turning brown, making people stop, stare, smell and wonder about the fragile passage of time.

What makes anything worthwhile is the use, joy or simple giggles that it gives us.

In the audio of this story, as well as in a previous Web version, we incorrectly say a version of this artwork had been sold for $150,000. That is the asking price for a third possible sale; the first two editions of Comedian reportedly sold for $120,000 each.