Accessibility links
American Student Accused Of Being A Spy By Iran Freed In U.S.-Iran Prisoner Swap The Princeton graduate student held by Iran for three years was released Saturday in exchange for Iranian scientist Massoud Soleimani, who had been held in the United States. 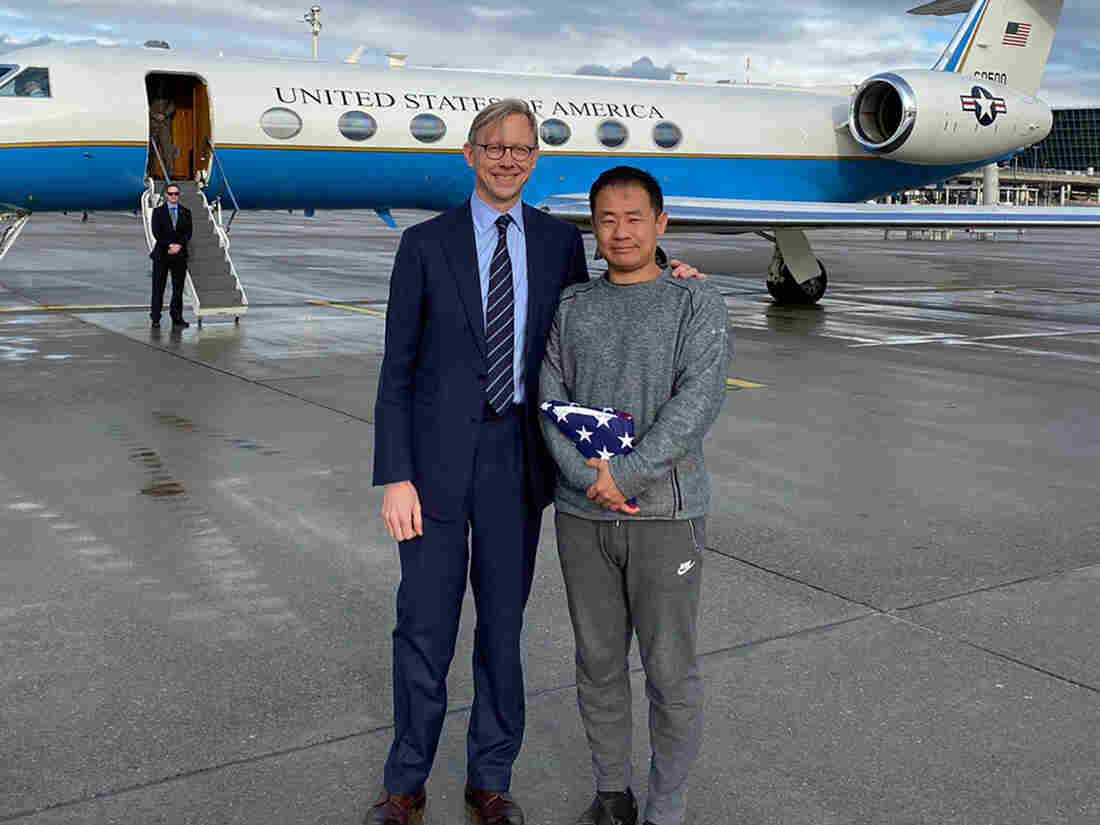 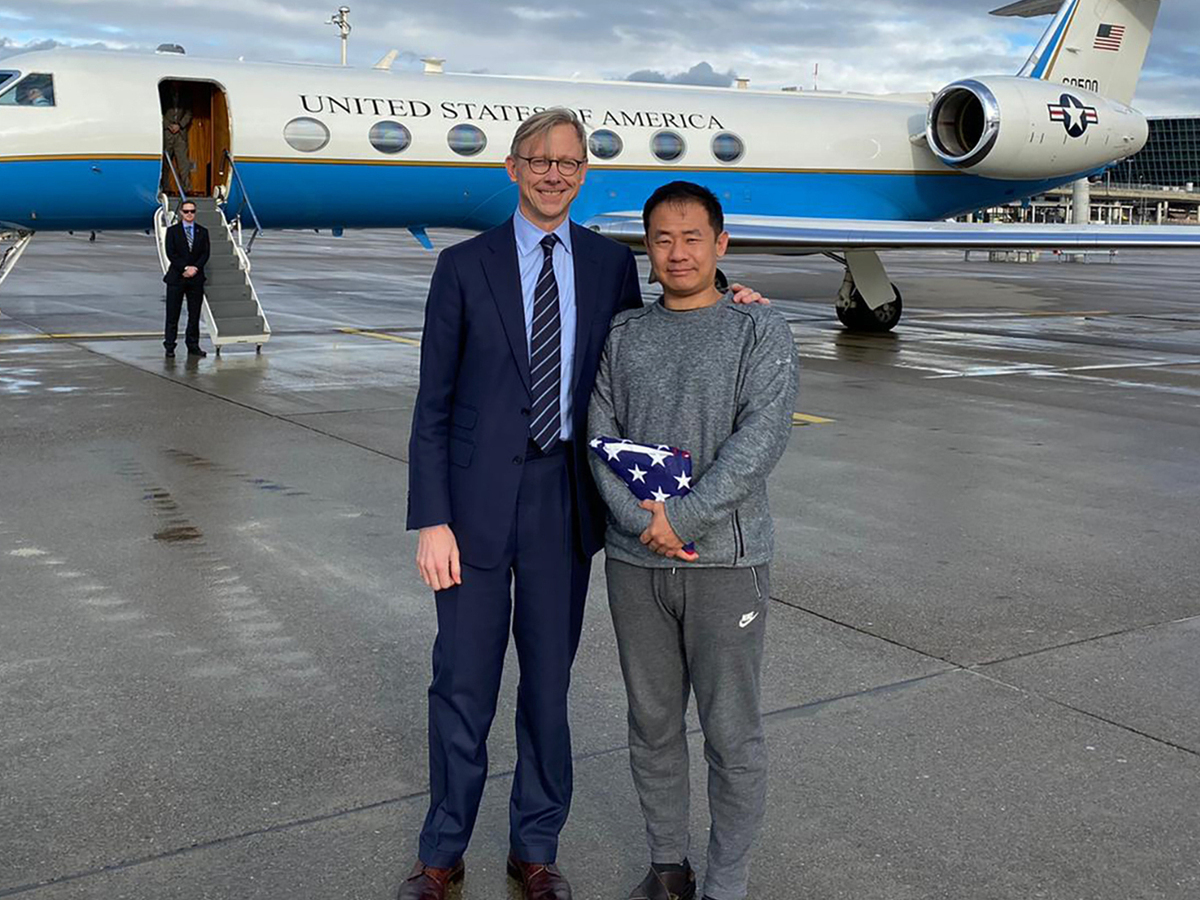 In a photo provided by the U.S. State Department, U.S. special representative for Iran Brian Hook stands with Xiyue Wang in Zurich, Switzerland on Saturday.

Iran freed an American held prisoner for the past three years, the White House said Saturday, while Iran confirmed the U.S. was freeing an Iranian scientist held in America in return.

The prisoner swap involves Xiyue Wang, a naturalized U.S. citizen and graduate student at Princeton University, who had been in an Iranian prison on espionage charges. Meanwhile, the U.S. released an Iranian scientist named Massoud Soleimani, who had been accused by American officials of violating trade sanctions.

"After more than three years of being held prisoner in Iran, Xiyue Wang is returning to the United States. A Princeton University graduate student, Mr. Wang had been held under the pretense of espionage since August 2016."

The White House also praised "our Swiss partners" for help brokering the release with the Iranian government. The administration's statement did not acknowledge the U.S. release of the Iranian scientist.

Wang was sentenced to 10 years in prison in Iran for spying for American and British intelligence agencies. Princeton said Wang was arrested while doing research on "the administrative and cultural history of the late Qajar dynasty in connection with his Ph.D. dissertation."

Thank you to the Swiss (@SwissMFA) for helping President Trump (@POTUS) deliver on his commitment to bringing all Americans home. @freeXiyueWang (1/2) pic.twitter.com/0h16ESfmRF

On a Saturday background call with reporters discussing the rare diplomatic breakthrough, a senior White House official said that Wang "appears to be in good health" and was receiving a medical evaluation in Germany. He is expected to return home soon.

"He was not a spy, he was not involved in espionage and was wrongly detained from the start," the official said.

The White House said negotiations of the release had been going on for some time, but picked up "intensely" over the past three to four weeks. Asked if this is a sign that talks stalled between the two countries could resume, the official said he was optimistic.

"I'm hopeful that the release of Mr. Wang is a sign that the Iranians are realizing that the practice of hostage-taking diplomacy really should come to an end if Iran wants to rejoin the international community," the official said.

Glad that Professor Massoud Soleimani and Mr. Xiyue Wang will be joining their families shortly. Many thanks to all engaged, particularly the Swiss government. pic.twitter.com/1TeZUL0CDG

Meanwhile, Iran's Foreign Minister Javad Zarif, in addition to thanking the Swiss government, acknowledged both prisoners in a tweet: "Glad that Professor Massoud Soleimani and Mr. Xiyue Wang will be joining their families shortly."

Included in the foreign minister's tweet were pictures of Soleimani and Zarif talking and posing in front of a plane with an Iranian flag painted near the cabin door.

Zarif had earlier floated the possibility of a prisoner exchange in a September interview with NPR's Steve Inskeep ahead of a gathering of the United Nations General Assembly.

He said of Wang, "I would love to see him go back to his family," but told NPR he had no authority to do that unless the U.S. agreed to exchange Wang for Soleimani.

"I have offered to exchange them because as foreign minister, I cannot go to our court and simply tell them 'release this man,' " Zarif said. "I can go to the court and tell them, 'I can exchange this man for an Iranian' and then have a standing, have a legal standing in the court."

In an interview with NPR on Saturday, national security adviser Robert O'Brien said that despite Iran's public posture, behind the scenes, Tehran was less serious about negotiations.

He said he hoped the prisoner exchange "portends well for the release of other Americans held hostage in Iran," and insisted that the swap would not incentivize the taking of other American hostages.

"We didn't give up anything," said O'Brien.

"There's no question the prisoner swap stands in huge contrast to the generally negative bilateral relations the U.S. and Iran have had," Kenyon said. "There are also other people ... other Americans being held" in Iran.

They include Baquer Namazi and his adult son, Siamak, who have been detained since 2015.

In a statement Saturday, Babak Namazi, the son and brother of the American prisoners said a statement he's "thrilled" for Wang and his family.

"At the same time, I am beyond devastated that a second President has left my ailing father Baquer Namazi and brother Siamak Namazi behind as American hostages in Iran in a second swap deal," the statement read.

"I hope, pray, and expect that this is not a one-time trade but the beginning of an expedited process that will bring my family home soon."

The family of Robert Levinson, another American prisoner being held in Iran, echoed similar sentiments.

"Our husband and father, has been held hostage for nearly 13 years — longer than any other American," the relatives said in a statement.

"We can't help but be extremely disappointed that, despite all its efforts, the United States government was unable to secure his release as well."

O'Brien said he understood "the frustration" and "disappointment" of the families and promised that the U.S. would continue to work toward bringing home other prisoners.

"When we have opportunities to get someone home, we do that," O'Brien said. "No one has been left behind and the president is fully committed to bringing all captive Americans home."

In a tweet, Secretary of State Mike Pompeo vowed the U.S. government's commitment to the release of Americans held captive overseas.

"We will not rest until we bring every American detained in Iran and around the world back home to their loved ones," Pompeo worte. "We thank the Swiss government for facilitating the return of Mr. Wang, and are pleased the Iranian government has been constructive in this matter."

We will not rest until we bring every American detained in Iran and around the world back home to their loved ones. We thank the Swiss government for facilitating the return of Mr. Wang, and are pleased the Iranian government has been constructive in this matter. (2/2)

Soleimani was hoping to complete a visiting scientist position at the Mayo Clinic in Minnesota, according to The Guardian, but after his arrest, "prosecutors in Atlanta have accused him and two of his former students of conspiring and attempting to export biological materials from the US to Iran without authorization, in violation of US sanctions. The two counts each carry a maximum penalty of 20 years in prison."

The Associated Press reports both Soleimani and his lawyers maintained his innocence, adding the scientist "seized on a former student's plans to travel from the U.S. to Iran in September 2016 as a chance to get recombinant proteins used in his research for a fraction of the price he'd pay at home."

For his part, Wang had been pursuing a doctorate in Eurasian history and was studying historical local government in predominantly Muslim regions.

In a 2017 interview with NPR, Wang's academic adviser at Princeton, Stephen Kotkin, said Wang "had tremendous background, life experiences, linguistic capabilities, and so he entered the program and hit the ground running and developed his interests even more."

Princeton said it had been working behind the scenes to free Wang.

In September 2018, a United Nations committee said Iran had "no legal basis" for Wang's arrest and detention.