Accessibility links
Victim In Pensacola Naval Base Shooting Dreamed Of Being A Navy Jet Pilot The Navy has named the three sailors killed in an attack at Naval Air Station Pensacola on Friday. The brother of one of the victims said that "he died a hero." 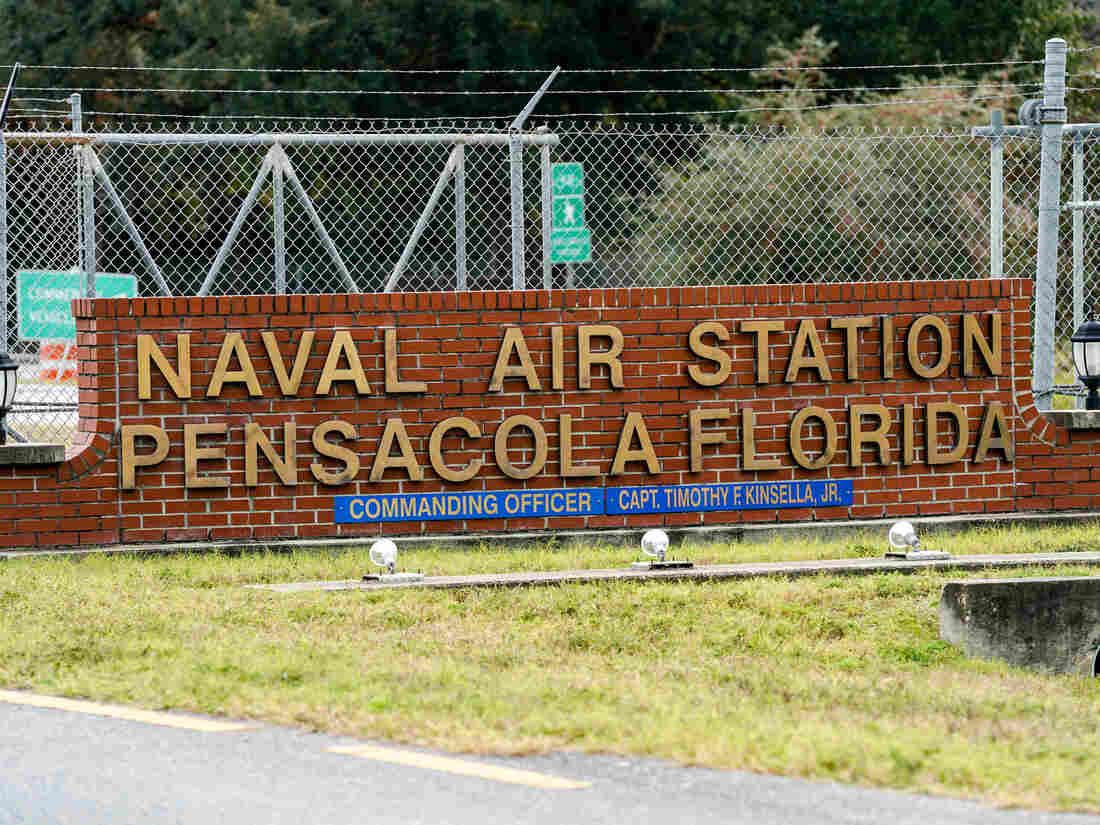 A gunman killed three people and injured eight others at Pensacola Naval Air Station on Friday. It was the second shooting on a U.S. Naval Base in a week. Josh Brasted/Getty Images hide caption 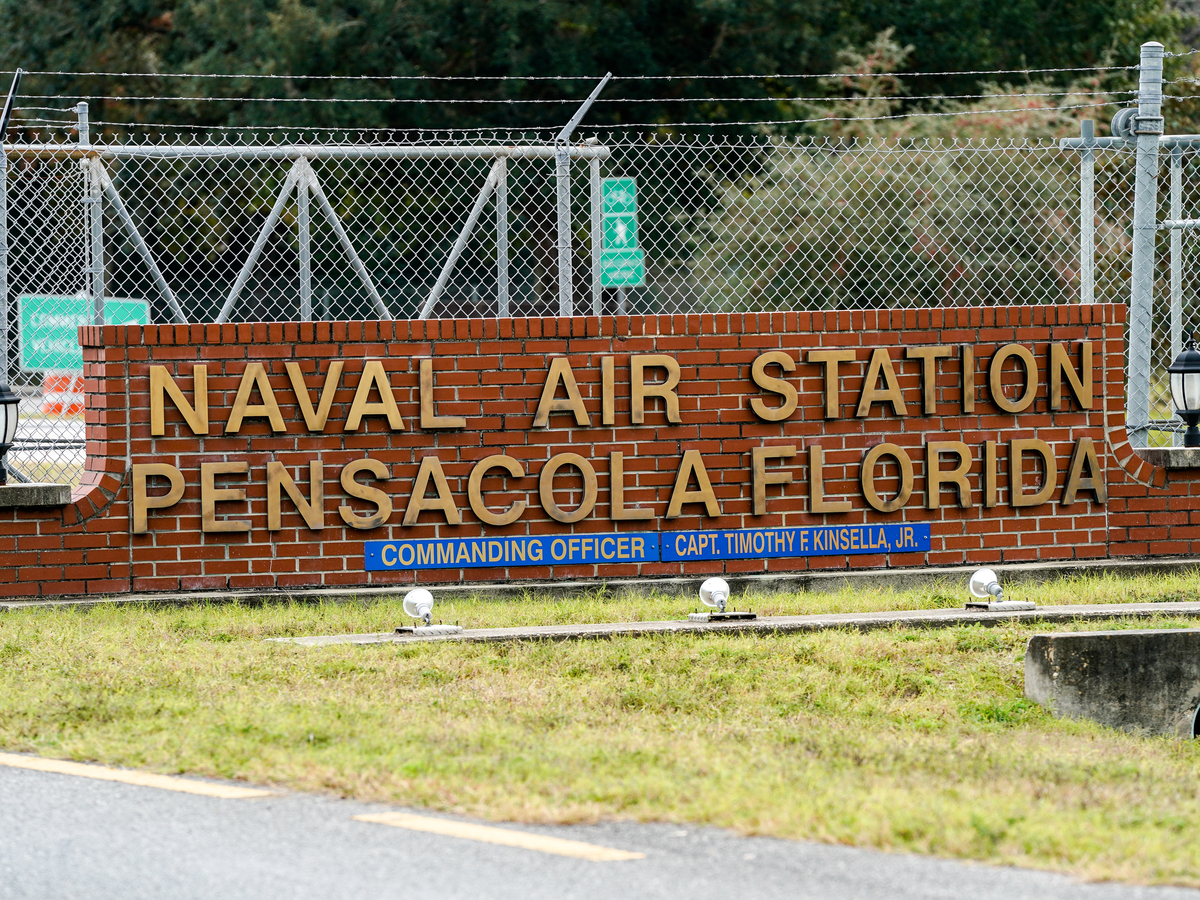 A gunman killed three people and injured eight others at Pensacola Naval Air Station on Friday. It was the second shooting on a U.S. Naval Base in a week.

The U.S. Navy has identified the three sailors killed by a shooter in an attack at Naval Air Station Pensacola Friday as Ensign Joshua Kaleb Watson, 23, from Coffee Ala.; Airman Mohammed Sameh Haitham, 19, from St. Petersburg, Fla.; and Airman Apprentice Cameron Scott Walters, 21, from Richmond Hill, Ga. All three were students at Naval Aviation Schools Command.

Earlier Saturday, the family of Joshua Kaleb Watson identified him as one of the three people killed Friday. Authorities say the gunman, a Saudi aviation student, also injured eight others before a sheriff's deputy killed him.

The FBI identified the shooter as Mohammed Alshamrani, a 21-year-old second lieutenant in the Royal Saudi Air Force. He was a student naval flight officer of Naval Aviation Schools Command.

Late Friday, several hours after the shooting took place, Adam Watson of Anniston, Ala., confirmed the death of his youngest brother in a Facebook post, calling him "a hero."

"Joshua Kaleb Watson saved countless lives today with his own," Watson writes. "After being shot multiple times he made it outside and told the first response team where the shooter was and those details were invaluable."

He adds: "He died a hero and we are beyond proud but there is a hole in our hearts that can never be filled."

In an interview with the Pensacola News Journal, Watson's father told the paper his 23-year-old son was shot at least five times.

Benjamin Watson said it was his son's dream to one day become a Navy pilot and he reported to flight training in Pensacola two weeks ago. He told the paper, "He died serving his country."

Joshua Kaleb Watson grew up in Enterprise, Ala. He became a captain on the rifle team while at the Naval Academy, according to a Navy bio page, which says "he competed 13 times during his senior season and started 13 times in smallbore and twice in air rifle."

Asked his preference between the two, he replied "smallbore for sure" in a interview with Navy Sports Magazine posted to YouTube in January.

Smallbore competition requires the shooter to fire a series of 20 rifle rounds from three separate positions — lying down, standing and kneeling.

Watson said growing up in Alabama, he handled firearms all the time, but says he was surprised the Navy had a rifle team.

"Wow, the Naval Academy has a shooting team, maybe this is a great way to get there," Watson said.

He was later asked about his goals and plans following graduation.

"I was selected for Navy pilot," Watson said. "So hopefully heading down to Pensacola ... right now I'm slated for November."

He had a clear focus on his trajectory once he arrived.

In another Facebook post on Saturday, Watson's sister-in-law, Jennifer LeAnn Watson, thanked those offering condolences and asked for prayers for the family, who are "hurting deeply."

"My brother in law did not die in vain he was and has always been a hero amongst everyone he touched and loved!" She continued, "His accomplishments and dedication to this country will never be forgotten!"

An entry on the Enterprise High School Facebook page called Watson's death "tragic" and described him "an incredible young man."

According to WTVY, a CBS affiliate in Dothan, William Cooper, the mayor of Enterprise, asked Alabama Gov. Kay Ivey to lower flags to half-staff until Watson is laid to rest.

Questions about the shooter's motive and about the foreign national being on a military base continue to go unanswered.

NPR's Debbie Elliott, reporting from Pensacola, told Weekend Edition Saturday, "the base commander and state officials did confirm that the gunman was an aviation student from Saudi Arabia — one of about 200 foreign students — part of allied forces who regularly train at Naval Air Station Pensacola."

Elliott said authorities confirmed the Saudi aviation student possessed a handgun, even though firearms are prohibited on base.

Some media outlets have reported the shooting may have been terrorism-related.

"No, I can't stay it's terrorism at this time," Secretary of Defense Mark Esper said Saturday when asked about the incident at the Reagan National Defense Forum in Simi Valley, Calif.

"I think we need to let the investigators, the FBI, do its work ... get us the facts and we'll move out from there," Esper said.

In an earlier version of this story, Alabama Gov. Kay Ivey's last name was misspelled as Ivy.