Accessibility links
Review: 'Blitzed,' By Alexa Martin The third book in Alexa Martin's Playbook series of football romances picks up with Brynn, owner of the bar where all the characters gather — and Maxwell, a defensive back for the Denver Mustangs.

'Blitzed' Will Leave You Feeling Warm And Tipsy

'Blitzed' Will Leave You Feeling Warm And Tipsy 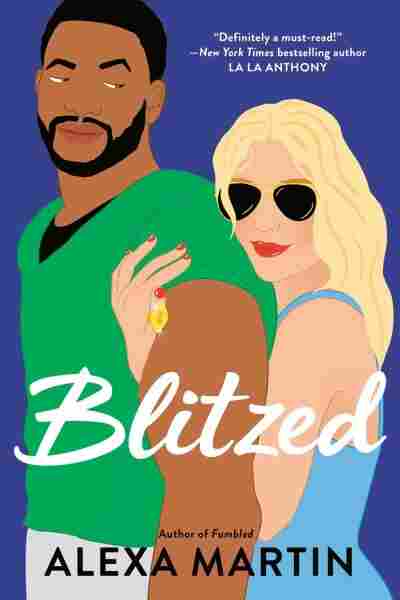 Alexa Martin's Playbook series is addictive enough to convert a non-sports fan into a football junkie, and her new novel Blitzed — the third in the series — is an electrifying cocktail of girl power, adorable romance, and enough drama to rival a reality show (which the series incidentally introduces in its universe).

Set in the same world as Martin's other two books, this installment hones in on Brynn Larson, who owns a bar called HERS, the unofficial go-to place for the Denver Mustangs, their wives and girlfriends, and fans. Brynn and defensive linebacker Maxwell Lewis have had the hots for each other for a while. But after a temper-induced mishap at her bar, Maxwell has to fight to get back into Brynn's good graces. Their meddling friends aside, he's always nearby for moral support — he rushes over to pick her up when her car breaks down, and before we know it, they're binge-watching Parks and Recreation at her place, having dinner with her dad, and generally hanging out more outside the bar.

Their laughs over Leslie Knope's antics and shared 7-Eleven meals signal the growth of a genuine friendship, one that flourishes alongside their romantic feelings and provides a solid foundation. Martin tosses out the playbook to the friends-to-lovers trope here by putting just as much narrative weight on Brynn and Maxwell's friendship as she does their romance.

Maxwell keeps his backstory close to his chest, but from the start, he's a sensitive sweetheart who undermines stereotypes about football players — instead of looking to score, he's content with Brynn's company however he can have it (even when that means nursing her through stomach flu). "You make me forget about football and remind me of who I am outside of it and that sometimes, the best part of life is sitting on the couch and laughing with your best friend," he admits at one point. (Awww!)

And even though Brynn feels the same way about him, she's still wary of his glamorous world — and she knows he's keeping a few secrets from her. Needless to say, those secrets become a sticking point in their relationship, and our all-star couple grapples to find their way back to each other. The conflicts in the novel would have benefited from more of a walk-through and explanation. For one, Maxwell's creepy older brother shows up to stir the pot about his past, but he immediately fades into the background, and it's unclear why he and Maxwell are estranged until the end. Despite her better judgment (and Maxwell's countless warnings), Brynn gives him the benefit of the doubt, but fortunately for Brynn and Maxwell, her squad steps in at the nick of time to lend their support.

At times, 'Blitzed' feels more like a "womance" than a romance, but given how masculine sports culture can be, it's fun to see the WAGS leading the charge without the cliched cattiness.

At times, Blitzed feels more like a "womance" than a romance, but given how masculine sports culture can be, it's fun to see the WAGS leading the charge without the cliched cattiness. For Brynn, the power comes twofold, both as a business owner who has broken into the masculine world of booze and bars, and as a partner setting the pace of her relationship. It's no surprise that Maxwell calls her "Boss."

By spotlighting Brynn instead of Maxwell (who gets his own share of media attention, mind you), Martin dismantles the "behind every successful man" adage and levels the playing field between them. Blitzed glitters with as much charm and fun as the bedazzled jerseys the WAGS wear to the games, and despite the title, it'll leave readers feeling warm and tipsy.