Accessibility links
Golden Globe Nominations: Netflix Leads — In Both Movies And Television The Golden Globe nominations are always odd, but this year they may be even odder than usual, particularly on the TV side. But it must be said: The Globes love a star, and now they love Netflix. 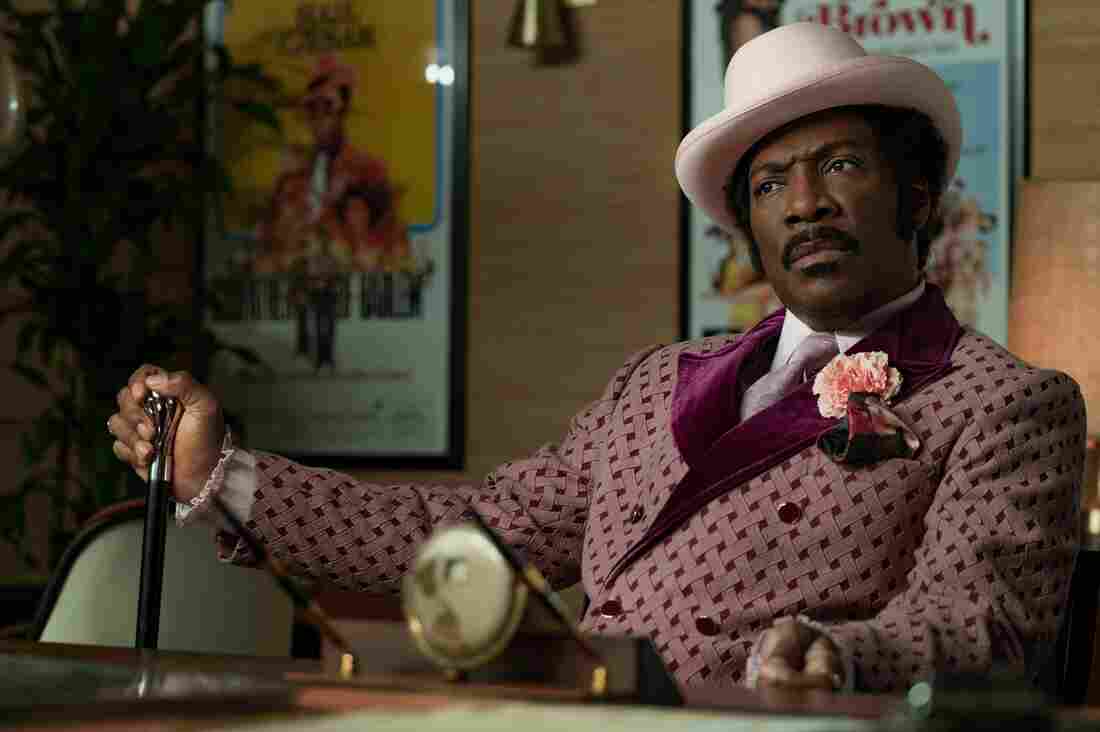 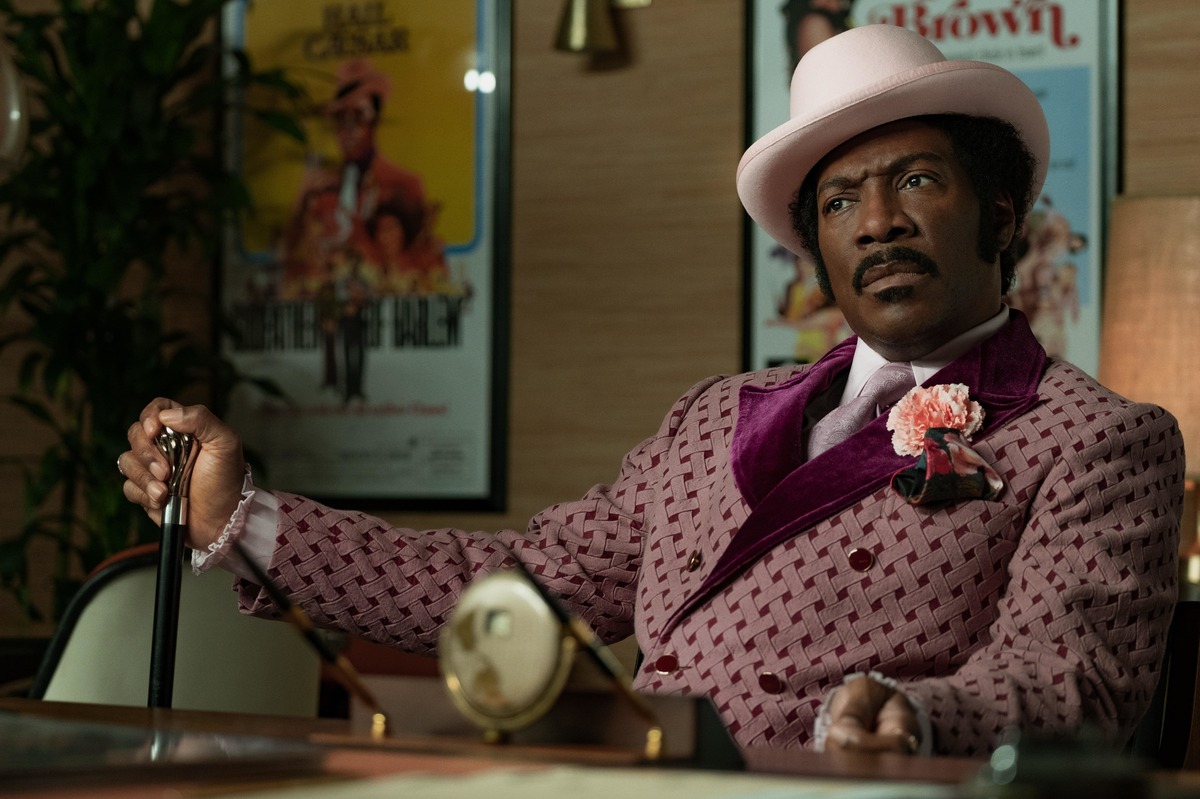 In Dolemite Is My Name, Eddie Murphy leads the star-studded biopic about Rudy Ray Moore, whose iconic alter ego became a blaxploitation legend.

The rapid ascent of Netflix as a creator of film and television continued Monday morning as the streaming service placed four films in the Golden Globes' 10 best motion picture contenders in comedy and drama. But the Hollywood Foreign Press Association rewarded established directors like Quentin Tarantino, too, while continuing its legendarily wacky devotion to some of its favorite celebrities.

As wise observers will remind you every year, the Golden Globes are, in a word, weird. Handed out by only about 90 members of the HFPA, they only kind of track with other awards, and they're much less useful as Oscar predictors than things like the Screen Actors Guild or Producers Guild of America — awards handed out by subgroups of Oscar voters. The Globes also have a reputation for rewarding the very most A-list people possible, a habit that coincidentally (?) helps populate the ceremony with stars. Still, the Globes can nudge some projects toward a higher profile, and for good or for ill, it's one of the flashier (and drunker) ceremonies of the season.

But even for the Globes, this was a set of nominations that can be most generously described as "whimsical." The HFPA's tendency to lend television nominations to what you might call the superfamous — people so established that even now, they are asked why they might dabble in television — may be at its height. (There are more categories than we can possibly get to; you'll see what we mean when you review the entire list.)

As for Netflix, only three years ago it was pushing its first real scripted awards contender, Beasts Of No Nation, starring Idris Elba. Now, with Dolemite Is My Name, The Two Popes, Marriage Story and The Irishman, it's presenting four of the leading candidates of the season in multiple categories. Netflix had more than twice as many nominations in the motion picture categories as Sony Pictures, the second-place distributor. All four films had theatrical openings, but only for a few weeks and only in certain places. All four seem sure to find their primary audiences — even prior to the Globes and the Oscars — on Netflix, in subscriber homes. All four seem like Oscar contenders.

Marriage Story, written and directed by Noah Baumbach, stars Adam Driver and Scarlett Johansson as divorcing parents of a young son. The Irishman is Martin Scorsese's three-and-a-half-hour mob drama in which Robert De Niro, Al Pacino and Joe Pesci lead a sprawling cast through a story that spans years. The Two Popes is a fictionalized account of a meeting between Pope Benedict and future Pope Francis. And Dolemite Is My Name stars Eddie Murphy in the true story of Rudy Ray Moore, whose Dolemite character became a sensation in the 1970s. 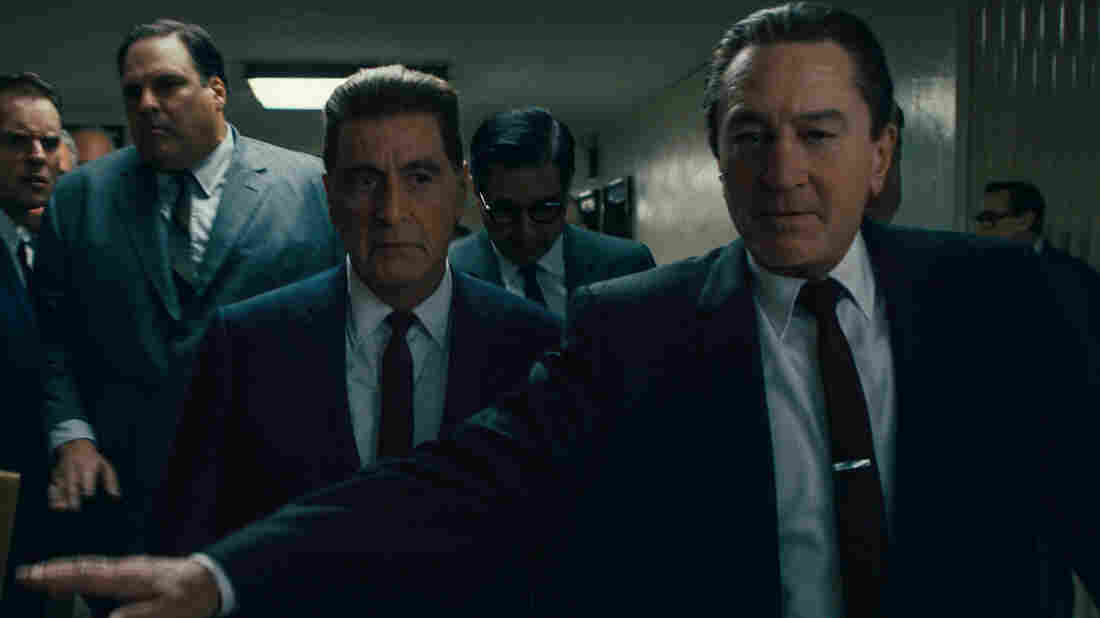 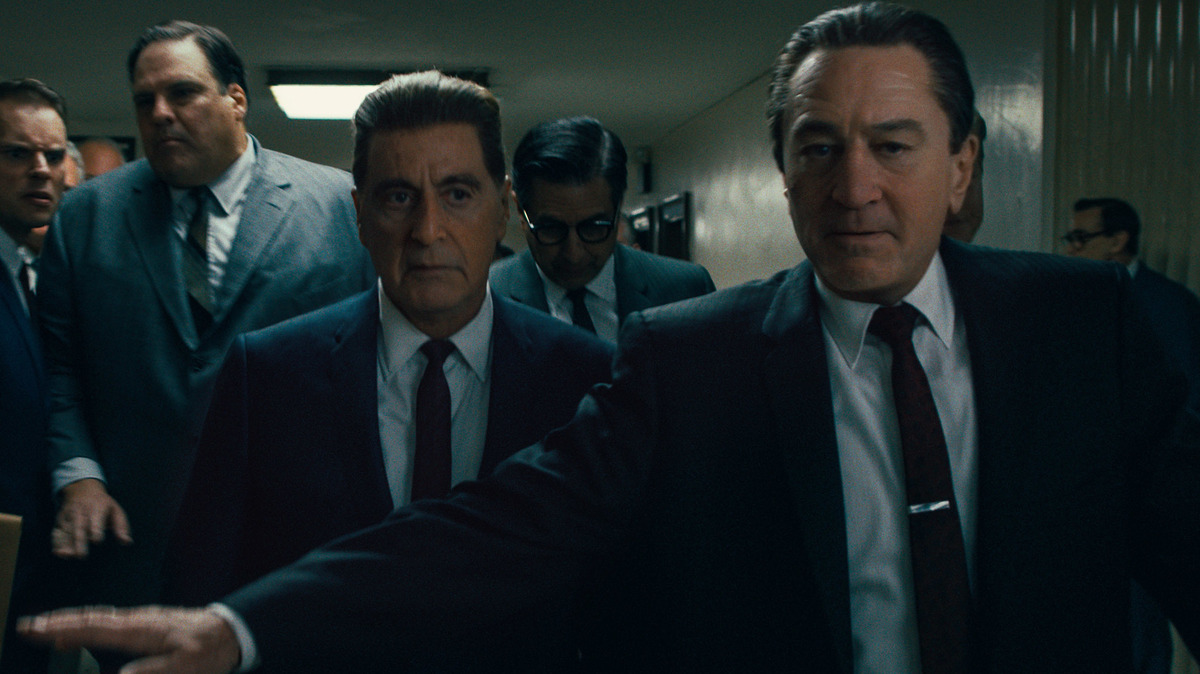 Nominated in the outstanding drama category alongside Marriage Story, The Two Popes and The Irishman is Joker, the Scorsese-inspired but Todd Phillips-directed film about a sad clown. And that category is rounded out by 1917, Sam Mendes' war drama shot to resemble a single unbroken take. One perhaps surprising absence in that category and some others is Uncut Gems, starring Adam Sandler as a desperate jeweler trying to get through a particularly bad day. Directed by the Safdie brothers, it's been racking up wins and nominations from groups including the National Board of Review, the Independent Spirit Awards and the Gotham Awards. It didn't show up on the Globes' radar.

On the comedy/musical side, Dolemite is joined by Tarantino's Once Upon A Time ... In Hollywood, a truth-adjacent tale of an actor and a stuntman (Leonardo DiCaprio and Brad Pitt) who cross paths with history in Los Angeles in 1969. Representing musicals is Rocketman, the Elton John biopic; representing "it's a comedy, but about Hitler" is Taika Waititi's Jojo Rabbit; and representing comedies not based on actual history is Rian Johnson's Knives Out.

Nominated TV dramas included Big Little Lies, The Crown, Killing Eve, The Morning Show and Succession. The miss on HBO's Watchmen is glaring, and in the dramatic acting category, the miss of Regina King as that show's lead is equally regrettable, particularly since Jennifer Aniston and Reese Witherspoon were both nominated for The Morning Show, which asks far less of both of them than Watchmen does of King. Despite its middling reviews, The Morning Show is perhaps the biggest Golden Globes bait ever assembled, with the superfamous Aniston, Witherspoon and Steve Carell all involved, and it's amusing but not surprising that the show's best performance — Billy Crudup as a slippery but transfixing television executive — was skipped.

We Break The Fourth Wall To Talk 'Fleabag'

The nominated TV comedies are Barry, Fleabag, The Kominsky Method, The Marvelous Mrs. Maisel and The Politician — with the surprise being The Politician, a Ryan Murphy Netflix project that, it should be noted, has a superfamous cast member in Gwyneth Paltrow.

But perhaps no superfamous person seems more directly responsible for a nomination than George Clooney. Clooney's supporting performance in, and position as an executive producer and director for, Hulu's mostly overlooked miniseries adaptation of Catch-22 seems like the only possible reason the show was nominated in the limited series category. That smarts in particular because the category — and the nominations in their entirety — snubbed Ava DuVernay's When They See Us, a project packed with deservedly lauded performances.

The best use to which the Globes' sense of whimsy has been put in the past has been the periodic boosting of new talent, and it's not that it didn't happen at all this year. It was lovely to see comedy/musical acting nominations for Ana de Armas in Knives Out, Awkwafina in The Farewell and Beanie Feldstein in Booksmart (along with Cate Blanchett in Where'd You Go, Bernadette [really!] and Emma Thompson in Late Night). All three are exciting and interesting actors with massive upside, and de Armas would have been easy to overlook in Knives Out's huge cast.

And what a treat — albeit not really a surprise — to see Jennifer Lopez justly nominated for her supporting performance in Hustlers. It seemed at one time like Lopez might not ever have a role as good as the one she had in Out of Sight. But here she was again, demonstrating that in the right role, she is like no one else.

But there are no female directors nominated this year, and no female screenwriters either. Little of this Netflix juice — so often lauded as a chance for people who can't find homes elsewhere to shine — inured to the benefit of women. Who are the big names in streaming, quoth the Globes? A lot of them are the same names who have been kicking around in Hollywood for a long time — Scorsese, Baumbach, Clooney. Powerhouse women in streaming, for the moment, are onscreen: Aniston, Witherspoon, Johansson. Not that theatrical releases were better: There was no nomination for Greta Gerwig for her directing or writing of the fabulous Little Women adaptation that's soon to arrive, although Saoirse Ronan was nominated for playing Jo March and Alexandre Desplat for his score.

Artists of color are mostly left out as well. While Bong Joon-Ho's Parasite was recognized in the foreign film, directing and screenplay categories, all five motion picture dramas are stories of white protagonists, told largely by white storytellers. Across movies and television, across 70 acting nominations, there are three black nominees: Billy Porter for the TV series Pose, Cynthia Erivo for playing Harriet Tubman in Harriet, and Eddie Murphy for Dolemite. That makes omissions like the work of artists like DuVernay and King all the more jarring.

It's good not to get all wound up about the Golden Globe nominations, because they're always somewhat ridiculous. But this year, they do seem a little extra ridiculous.