Accessibility links
Myanmar's Suu Kyi In Hague To Defend Against Rohingya Genocide Charges The de facto leader of Myanmar will testify in front of the International Court of Justice to answer charges that her country carried out genocide against the Muslim minority group. 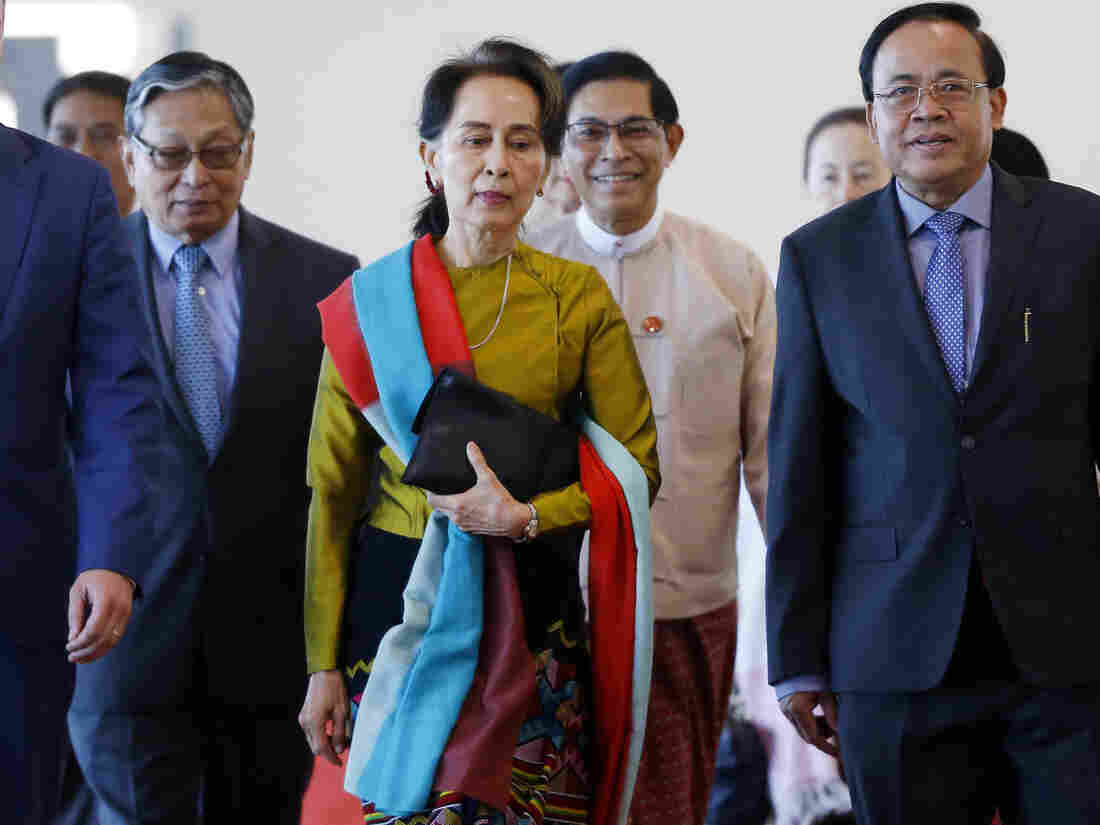 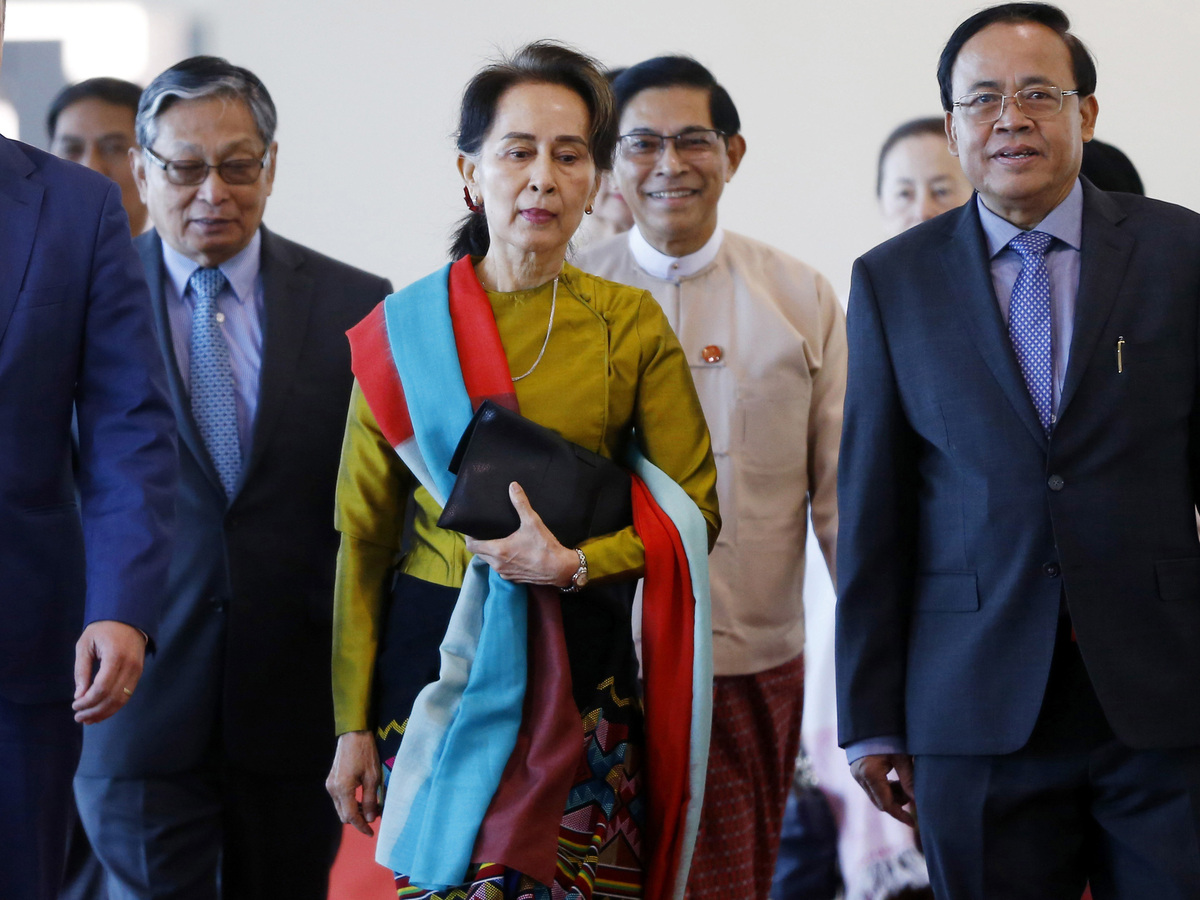 Aung San Suu Kyi, the de facto leader of Myanmar, will testify in front of the International Court of Justice on Wednesday, where she's set to mount a defense on behalf of her country to charges of genocide against minority Muslim Rohingya.

Suu Kyi, a Nobel Peace Prize laureate and former longtime political prisoner, was once viewed globally as a champion of democracy and human rights. However, she is accused of standing by as Myanmar's military carried out a brutal crackdown on the Rohingya beginning in 2016, causing an estimated 700,000 people to flee to neighboring Bangladesh. The organizers of a 2018 fact-finding mission told the United Nations that 10,000 Rohingya deaths would be a "conservative estimate."

Despite Myanmar's transition to civilian leadership, the military still holds significant power. Suu Kyi led her National League for Democracy party to a landslide victory in 2015. Her formal title is "state counsellor," a position she created to skirt a provision in Myanmar's constitution that bars anyone with foreign children or a foreign spouse from holding the presidency. The constitution also dictates a power-sharing agreement that ensures Myanmar's armed forces control a quarter of the seats in parliament and three top cabinet posts.

At The Hague this week, Suu Kyi will lead a delegation aimed at countering allegations of genocide against her country's military. It's a rare appearance of a national leader before the United Nations' principal judicial organ, but one that analysts say plays well for Suu Kyi in Myanmar, where she faces an election next year and needs to solidify domestic support.

Thousands gathered in Myanmar on Sunday to cheer Suu Kyi as she prepared to leave for the Netherlands. Throngs of people waved flags and hoisted colorful Suu Kyi portraits and signs saying, "We stand with our leader."

David Mathieson, an independent analyst in Yangon, says for much of Myanmar, the reaction to Suu Kyi's decision to personally appear at The Hague was one of "shock."

"I think it was one of 'good on Mother Suu for sticking up for our country and confronting what many see as these unjust charges,'" Mathieson says. 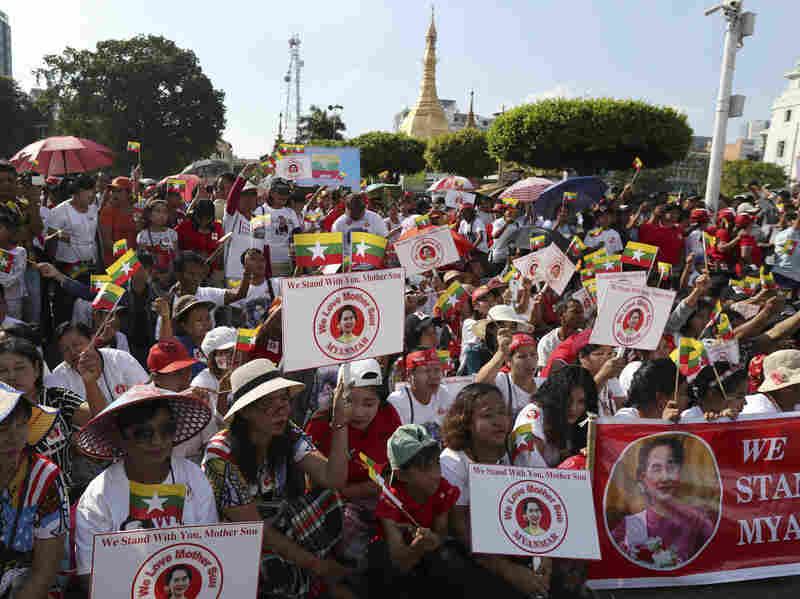 About 700 people rallied Dec. 1 in Yangon to show support for Myanmar's leader, Aung San Suu Kyi, as she prepares to defend the country against charges of genocide at the U.N.'s highest court. Thein Zaw/AP hide caption 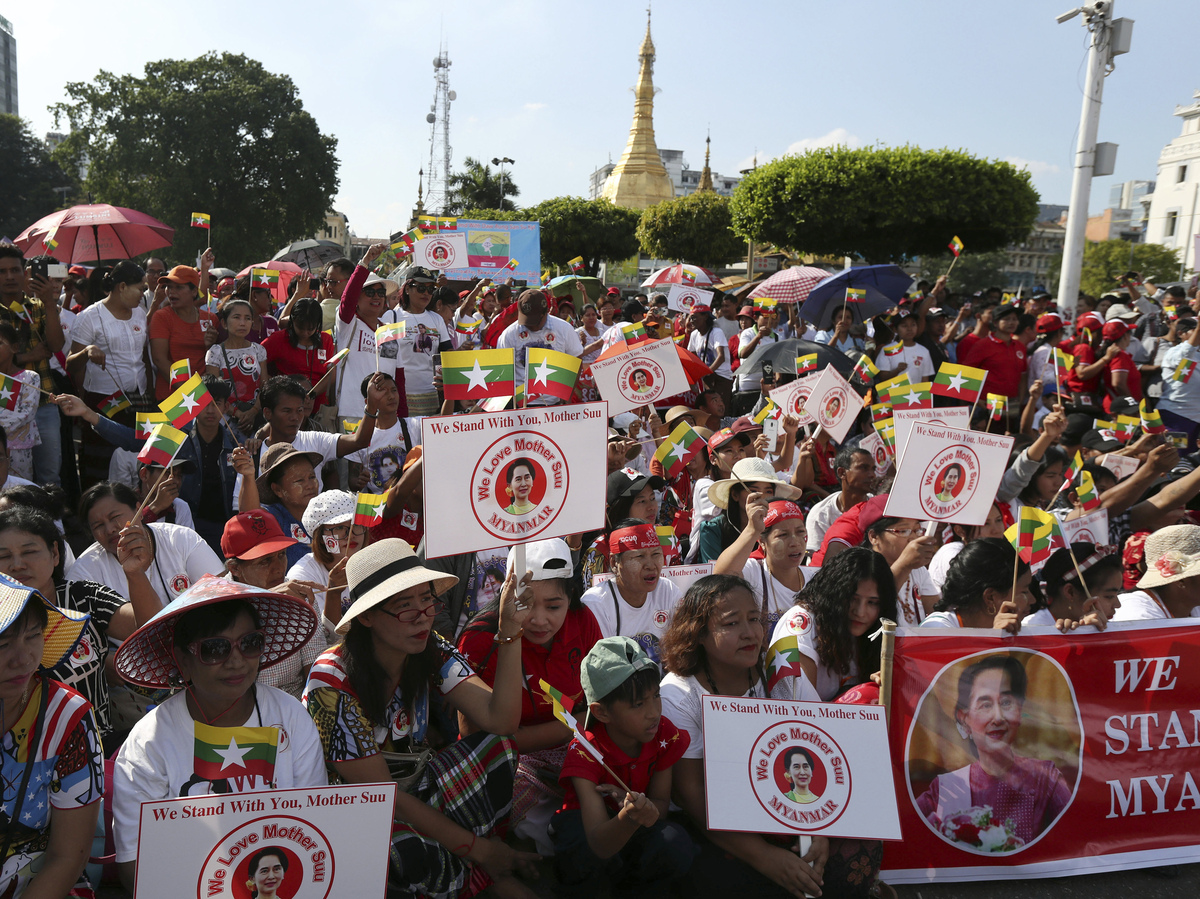 About 700 people rallied Dec. 1 in Yangon to show support for Myanmar's leader, Aung San Suu Kyi, as she prepares to defend the country against charges of genocide at the U.N.'s highest court.

The case against Myanmar was filed by Gambia, backed by the 57-member Organization of Islamic Cooperation. Gambia claims that Myanmar's military carried out rape, torture and killing in Rohingya communities — a violation of the 1948 Convention on the Prevention and Punishment of the Crime of Genocide.

Back in November, a three-judge panel of the International Criminal Court, which prosecutes individuals, concluded that there is "reasonable basis to believe widespread and/or systematic acts of violence may have been committed that could qualify as the crimes against humanity of deportation across the Myanmar-Bangladesh border and persecution on grounds of ethnicity and/or religion against the Rohingya population."

As NPR's Jason Beaubien has reported:

In 2017, after an armed Rohingya separatist group attacked a police station, Myanmar soldiers and pro-government militias launched what the U.N. and human rights groups have denounced as a campaign of ethnic cleansing against the Rohingya. Entire villages were burned to the ground. Thousands were killed.

Myanmar officials say the violence was a security operation targeting terrorists, and the Rohingya refugees are welcome to come home. Myanmar has refused to allow United Nations investigators or international journalists into the country to investigate the alleged massacres. It has jailed two Myanmar reporters who were investigating the killing of Rohingya Muslims for Reuters.

Suu Kyi, he says, "genuinely wants to have literally her day in court and I think she genuinely believes that there can be no one better to represent the country at this time."

Matthew Smith, executive director of the human rights organization Fortify Rights, tells NPR that he expects Suu Kyi to make the same defense she's been making for months now: "Denying that the crime of genocide took place, alleging or pointing, trying to shift attention to crimes that were perpetrated by Rohingya militants. And really trying to paint a picture of a situation in which it is the state dealing with Islamic terrorist threats."

Mathieson, the Yangon-based independent analyst, says that will be a difficult case to make, given extensive documentation by a U.N. fact-finding mission and research by groups like Amnesty International.

But Human Rights Watch Deputy Asia Director Phil Robertson says he's hopeful about the prospect of accountability in Myanmar, as long as accountability for the alleged atrocities reaches Suu Kyi.

"The reality is, she's thrown in with the generals, she's part and parcel of the atrocities against the Rohingya and nothing's going to change that," he tells NPR. "If she's going to be leader of the cover-up, certainly there needs to be some action taken against her on that."