Accessibility links
Saudi Gunman Legally Purchased Pistol Used In Pensacola Air Station Attack Calling for a review of federal gun laws, Florida Gov. Ron DeSantis says, "The Second Amendment is so that we the American people can keep and bear arms. It does not apply to Saudi Arabians." 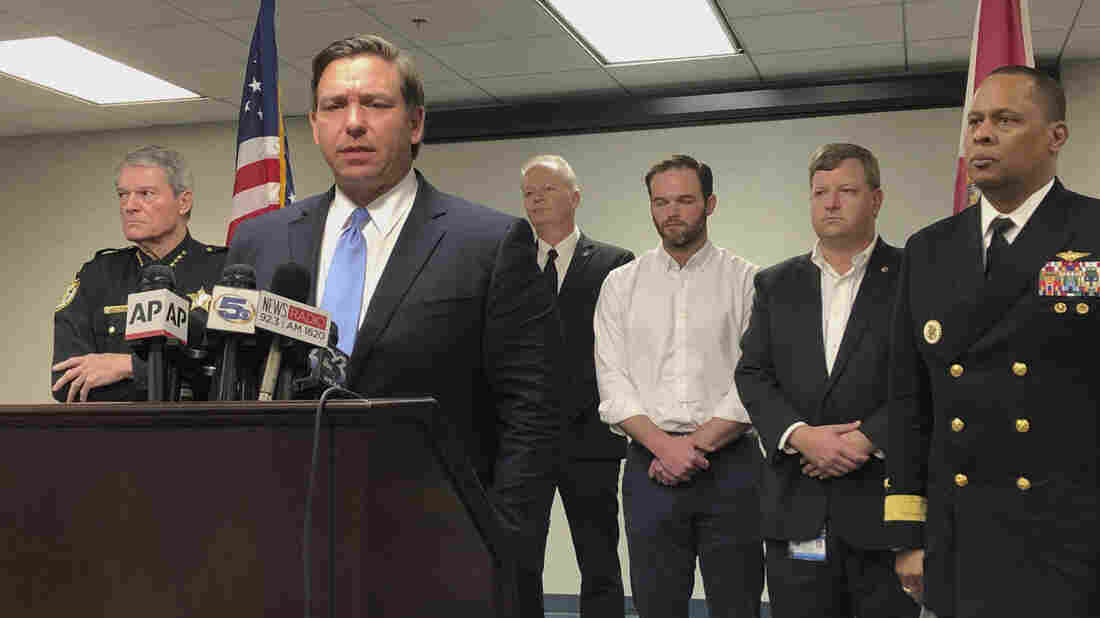 Florida Gov. Ron DeSantis says federal laws that allow foreign nationals to buy guns in the U.S. should be reviewed after a Saudi gunman carried out a mass shooting in Pensacola, Fla. DeSantis says, "The Second Amendment is so that we the American people can keep and bear arms. It does not apply to Saudi Arabians." Brendan Farrington/AP hide caption 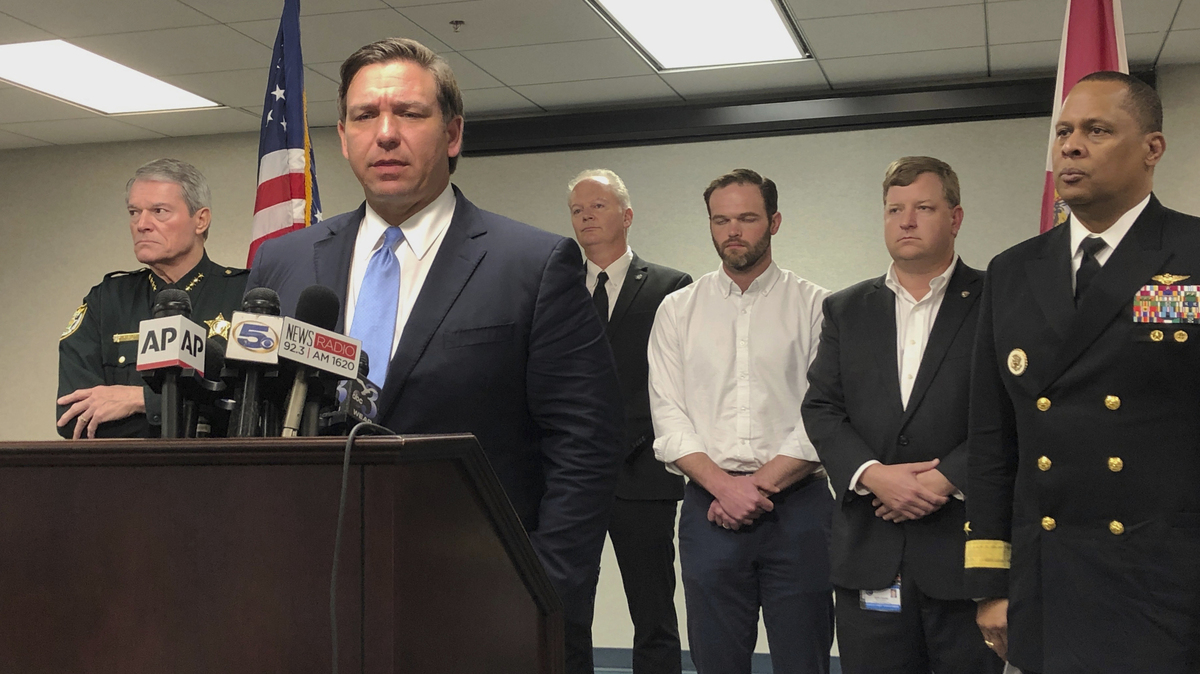 Florida Gov. Ron DeSantis says federal laws that allow foreign nationals to buy guns in the U.S. should be reviewed after a Saudi gunman carried out a mass shooting in Pensacola, Fla. DeSantis says, "The Second Amendment is so that we the American people can keep and bear arms. It does not apply to Saudi Arabians."

The Glock handgun that was used in Friday's shooting at Naval Air Station Pensacola was purchased legally in the U.S., the FBI says. Mohammed Alshamrani, a Saudi national, used the weapon to kill three sailors and wound eight more people.

Alshamrani was "a 21-year-old second lieutenant in the Royal Saudi Air Force who was a student naval flight officer at Naval Aviation Schools Command" in Pensacola, according to Rachel Rojas, special agent in charge of the Jacksonville Field Office.

The FBI is investigating the case as an act of terrorism. The agency says Alshamrani bought the 9mm Glock model 45 pistol in Florida.

"He did purchase it legally and lawfully," Rojas said at a news conference on Sunday. Of the legal process Alshamrani used to acquire the weapon, she added, "It's not just him, but any foreign national."

The FBI has been tight-lipped about the high-profile case, even as Florida politicians have spoken out publicly about it.

Florida Gov. Ron DeSantis has repeatedly called for better vetting of military personnel who come to the U.S. for training, saying on Sunday, "they should not be doing that if they hate our country."

Of Alshamrani's gun purchase, DeSantis said, "That's a federal loophole he took advantage of. I'm a big supporter of the Second Amendment – but the Second Amendment is so that we the American people can keep and bear arms. It does not apply to Saudi Arabians. He had no constitutional right to do that, for sure."

DeSantis said he was surprised to learn foreign nationals can buy guns in the U.S., adding, "I think that they should definitely look at that."

When Rojas was pressed for details about the pistol, including when the Saudi student bought it, she declined to divulge that information.

"We're not going to go into the specifics of the investigation at this time," she said, adding, "It was purchased lawfully, and that's the information we're sharing."

Joseph Vince, a former special agent with the ATF who now works as a gun crime consultant, says it doesn't surprise him that Alshamrani was able to buy a gun as a foreigner visiting the U.S.

"Aliens legally in the country can buy a gun," he said. "A lot of times if they're going to take it back, they have to have something written from their embassies to do it — but they can purchase it legally."

Vince added, "I would venture to say that for a lot of these military people that come over here to train, that taking back a weapon [to their home country] would be something that would be a common thing that would occur."

According to the Bureau of Alcohol, Tobacco, Firearms and Explosives, foreign nationals who are in the U.S. on a nonimmigrant visa are forbidden from possessing a gun or ammunition unless they meet one of several exceptions. Those exceptions allow for someone with "a valid hunting license or permit, admitted for lawful hunting or sporting purposes, certain official representatives of a foreign government, or a foreign law enforcement officer of a friendly foreign government entering the United States on official law enforcement business."

In response to a request for information about the Alshamrani case, the ATF cited the relevant federal law, which is posted on its website. The agency's statement to NPR also adds some details about how gun sales between foreign nationals and U.S. sellers can take place:

"A nonimmigrant alien who falls within an exception and has established residency in a State may purchase and take possession of a firearm from an unlicensed person, provided the buyer and seller are residents of the same State, and no other State or local law prohibits the transaction. A nonimmigrant alien with residency in a State may purchase a firearm from a licensee, provided the sale complies with all applicable laws and regulations."

The Glock 45 pistol's magazine normally holds 17 rounds; a 10-round magazine is also available, for customers who live in the small number of states with that restriction. On Glock's online store, the weapon is currently listed for sale at from $539 to $649.

There have been media reports that the Saudi gunman may have bought the pistol after obtaining a hunting license. When asked about that on Monday, the ATF declined to comment.

As for why Alshamrani's purchase of a Glock pistol on the strength of a hunting license might not have raised any alarms, the former ATF agent Vince said, "People do take handguns when they do hunt — especially if you're hunting wild boar or something. That's not uncommon."

NPR has been in touch with the Florida Fish and Wildlife Conservation Commission about what type of hunting license the Saudi military service member might have obtained. We'll update our reporting when the agency responds to that inquiry.