Accessibility links
Why European Countries Are Reluctant To Repatriate Citizens Who Are ISIS Fighters Hundreds of ISIS fighters from Europe are in prison facilities in Syria. The prospect of repatriating them is deeply unpopular in much of Europe, and some countries have stripped them of citizenship. 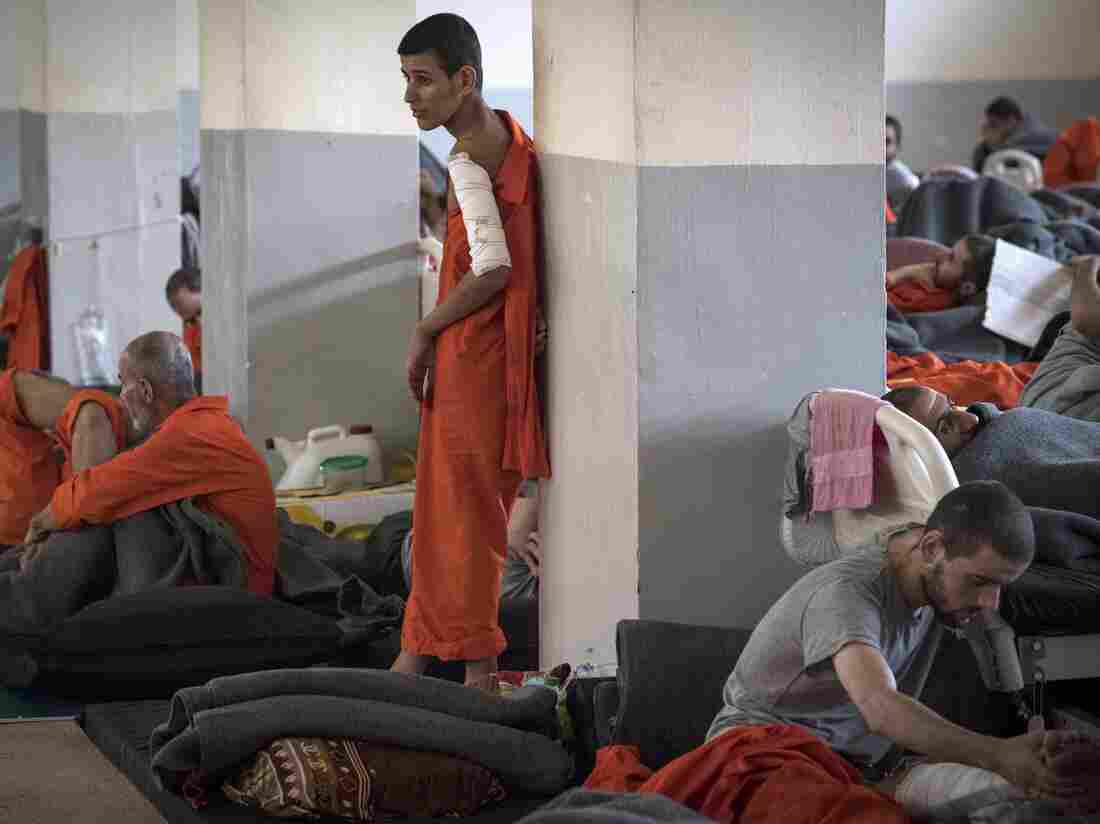 Suspected Islamic State militants languish in a prison cell in northeastern Syria in October. The Pentagon has reported about 10,000 ISIS fighters are being held in prison facilities in northeastern Syria. Some 2,000 are said to be foreign fighters, with the rest identified as Iraqi and Syrian nationals. Of the 2,000 foreign fighters, an estimated 800 are from European nations. Fadel Senna/AFP via Getty Images hide caption 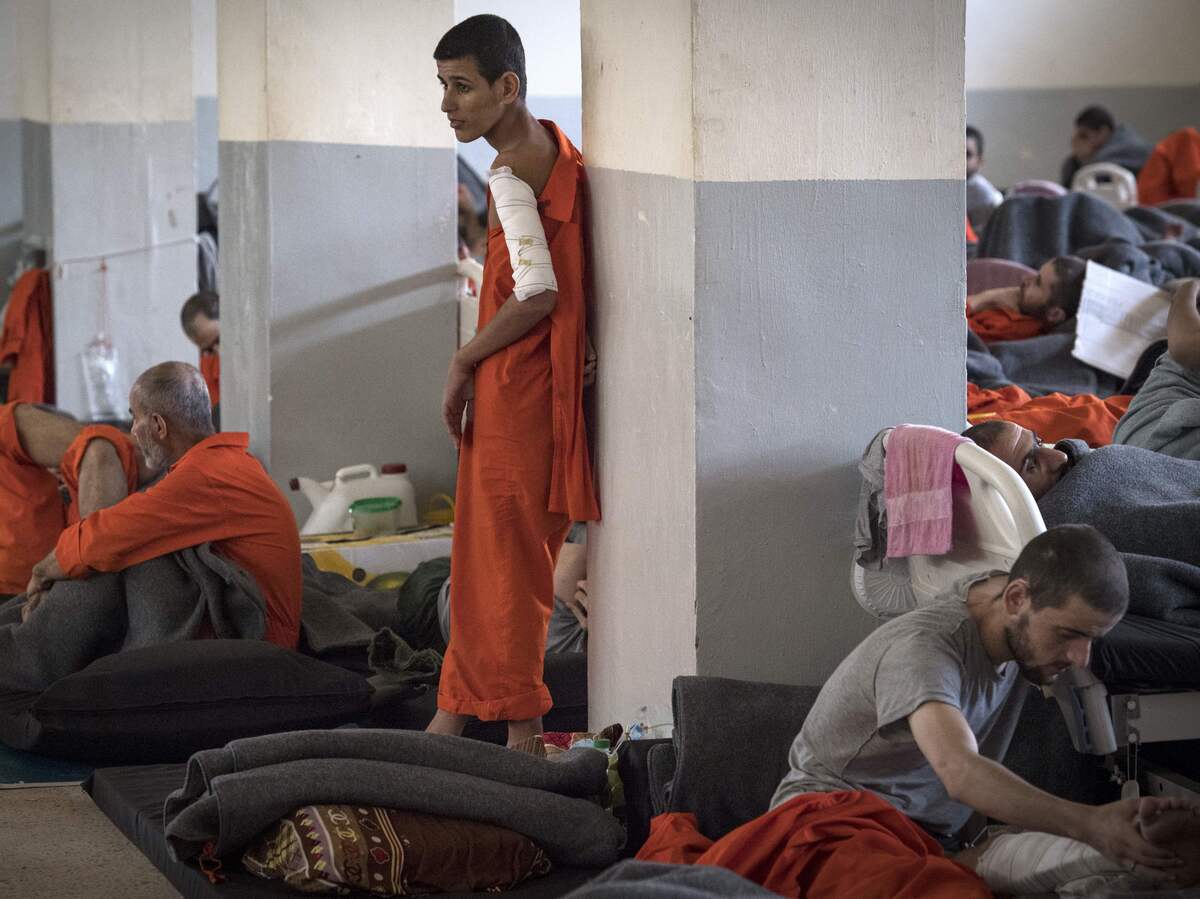 Suspected Islamic State militants languish in a prison cell in northeastern Syria in October. The Pentagon has reported about 10,000 ISIS fighters are being held in prison facilities in northeastern Syria. Some 2,000 are said to be foreign fighters, with the rest identified as Iraqi and Syrian nationals. Of the 2,000 foreign fighters, an estimated 800 are from European nations.

President Trump is continuing to put pressure on European governments to repatriate their ISIS fighters, who the Pentagon says are being held in "pop-up prisons" in northeastern Syria.

"Would you like some nice ISIS fighters?" Trump asked French President Emmanuel Macron on the sidelines of last week's NATO leaders meeting in London. "I can give them to you." To which Macron replied, "Let's be serious."

The awkward exchange between the two world leaders was emblematic of the wider issue at hand. The Trump administration wants Europe to take back its terrorist fighters, but European leaders have brushed away the idea.

Trump previously threatened to drop "thousands" of ISIS fighters into Europe should the various countries continue to shy away from taking them back.

"We're holding thousands of ISIS fighters right now, and Europe has to take them," he told reporters in August. "If Europe doesn't take them, I'll have no choice but to release them into the countries from which they came, which is Germany and France and other places."

The Pentagon earlier this year reported that an estimated 10,000 ISIS fighters are being held in prison facilities scattered across northeastern Syria. About 2,000 of the detainees are said to be foreign fighters, with the rest identified as Iraqi and Syrian nationals. Of the 2,000 foreign fighters held in Syria, an estimated 800 are from European nations.

U.S. military officials have warned that Kurdish-led Syrian Democratic Forces do not have the capacity to detain thousands of ISIS fighters. Washington has repeatedly called on European countries to repatriate their citizens and try them in their home countries.

"We need countries to repatriate their citizens now more than ever because of the possibly grave consequences of foreign terrorist fighters returning to their home countries on their own and unchecked," a State Department official told NPR.

The prospect of repatriating ISIS fighters is deeply unpopular in most European countries. A recent poll in France found 89% of respondents opposed the return of adult fighters.

In Britain, where voters will elect a new parliament on Thursday, politicians are treading especially carefully.

"We certainly want to see those responsible for atrocities and crimes given justice in the region, so far as that is practical," Britain's Foreign Secretary Dominic Raab said in October. "In relation to the question of returns, we do not want to see foreign fighters returning to this country."

Public opinion and memories of recent terrorist attacks in Belgium, France, Germany and the U.K. have put politicians in a bind. Even though most politicians and experts agree that repatriating ISIS fighters would be far safer than leaving them in badly protected prisons, advocating for such an approach is tantamount to political suicide, said Thomas Renard, a senior research fellow at the Egmont Institute in Brussels.

"If European countries do set in place repatriation campaigns, it possibly is going to cost them in terms of votes, and it's going to make these governments a relatively easy target for far-right political parties and populist parties," he said.

The U.K. and Denmark have taken some of the most drastic measures thus far by stripping alleged ISIS fighters and their family members of their citizenship in certain instances. Other countries, such as Germany and Sweden, have considered similar plans of their own.

Many European countries have argued it will be difficult to prosecute or convict alleged ISIS fighters for their crimes due to a lack of evidence. Countries might have to settle for minimal sentences, meaning convicted terrorists could be back on Europe's streets in a few short years.

So far, critics say, efforts to rehabilitate former and would-be extremists across Europe have not produced encouraging results. Usman Khan, the London Bridge attacker, served only half of his 16-year sentence and was considered a success story for his rehabilitation program. British Prime Minister Boris Johnson was quick to blame his country's previous administration for the system of early release for convicted terrorists.

"If you are convicted of a serious terrorist offense, there should be a mandatory minimum sentence of 14 years — and some should never be released," Johnson said last week.

In France, an attempt to establish deradicalization centers ended after only five months in 2017. French politician Philippe Bas, a senator from the center-right Republicans party, called the government's plan a "total fiasco."

But Renard argues that doing nothing is far riskier.

"If you leave these foreign fighters in the [Middle East] region, there's a risk that they will further continue radicalizing," he said. "There is also the risk that they may be released by the Kurds, the Turks or the Iraqis at some point and make their way back to Europe in an uncontrolled manner. That's kind of the worst-case scenario."

If fighters stay in the Middle East, they might rejoin ISIS or other terrorist groups, Renard added.

Several nations, including Germany and France, have transferred some of their nationals to Iraq for prosecution. Between May 26 and June 3, 11 French defendants were sentenced to death by hanging in an Iraqi court.

Repatriating adult male fighters is not the only question vexing Europe — there is also the question of what to do with their family members. The U.N. Office of the High Commissioner for Human Rights estimates that 11,000 of the roughly 70,000 residents of Syria's al-Hol camp are relatives of foreign ISIS fighters. Most are women and children. U.S. Central Command described the residents of al Hol and other, smaller refugee camps as potentially susceptible to ISIS messaging, coercion and enticement.

Most European governments have said they would consider repatriating children, at least up to a certain age. "However, in reality, it has not resulted in a proactive repatriation campaign for children in the region," Renard said.

An official from the German Federal Foreign Office with knowledge of the situation told NPR the country has been working for several months to facilitate the transfer of German children from northern Syria. Four children arrived in Germany in August, the spokesperson said. The U.K. has repatriated a small number of orphaned children of British ISIS fighters. France has also repatriated several children this year. But a poll in France found two-thirds of people favored leaving the children of jihadists in Iraq and Syria.

Gilles de Kerchove, the European Union's counterterrorism coordinator, warned in May that some of the children of ISIS fighters are at risk of becoming "the next generation of suicide bombers." He described the situation as a "ticking time bomb."

Finding a common European approach to repatriating militants is complicated by the fact that not all nations on the continent share the same concerns. The European Parliament has not adopted an official position on the repatriation of ISIS fighters, as it falls under the jurisdiction of individual EU member states.

"Some countries are not even concerned at all because they have no citizen in Syria and Iraq, so it only concerns only a minority of the member states," Renard said.

However, he proposes that countries facing the same issues develop a shared strategy to ease logistical and legal burdens of repatriation.

In addition, a number of European nations currently don't have consular services in Damascus, Syria's capital, and rely on the help and support of humanitarian organizations and Syrian Kurds.

Turkey's recent incursion into parts of northern Syria, anti-government protests in Iraq and the ongoing civil war in Syria all make an already-complicated situation more so. Turkey recently deported captured fighters hailing from the United States, Denmark and Germany back to their native countries, and threatened to send more in the future.

"These gates will open and these IS members who have started to be sent to you will continue to be sent. Then you can take care of your own problem," Turkish President Recep Tayyip Erdogan warned last month.

Stavros Lambrinidis, the European Union ambassador to the United States, told NPR that Turkey's invasion of northern Syria resulted in the escape of many foreign fighters.

"That is the real danger. If we're going to be serious about the business of ensuring that ISIS does not find a way to rear its ugly head again and to be a real threat, we must be able to address this issue looking at the totality of the risks of people escaping and destabilizing Syria again in a way that creates new radicalization," he said. "This is a classic example of a case that we ought to be much better coordinated together, Americans and Europeans."

Despite the risks of leaving Western-born fighters in Syria and Iraq, Renard believes European countries' reluctance to repatriate their citizens will continue.