Accessibility links
CHART: Democratic Governors Make A Big Comeback Under Trump With Kentucky's gubernatorial inauguration on Tuesday, Democrats are nearing parity with the GOP after a historic low point in 2016. That could have a big impact on redistricting and other key issues. 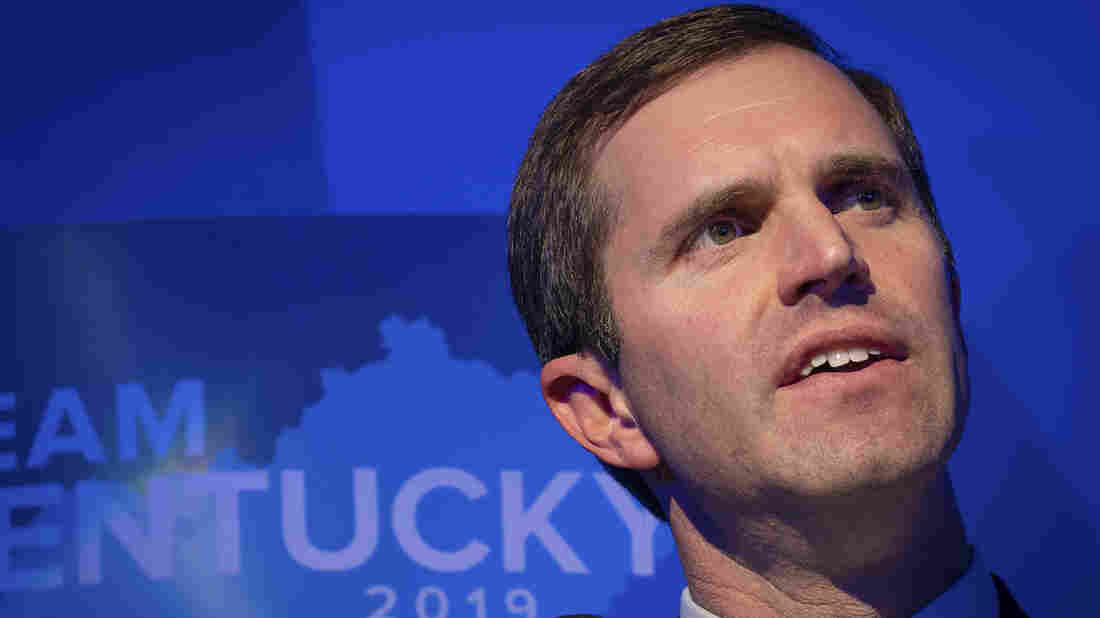 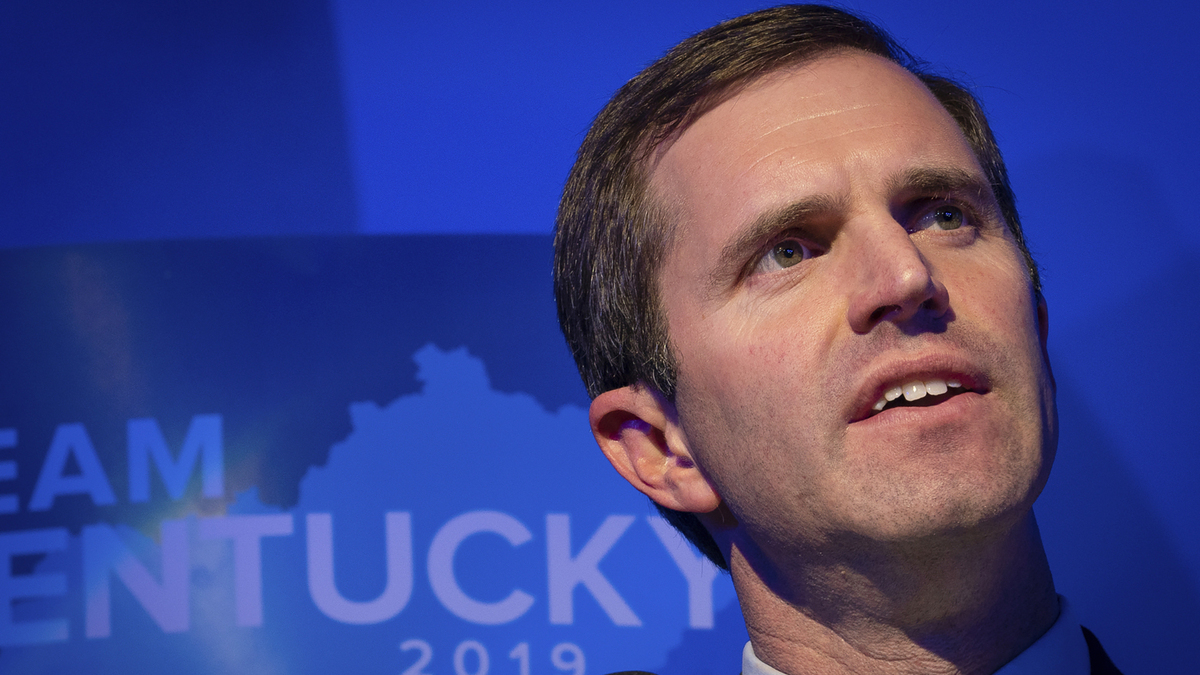 At the start of President Trump's term, Republicans had solidified control in Washington and their hold on state governments across the country, with 33 GOP governors in power. Democrats were at their lowest numbers in nearly a century — down to just 16 Democratic governors and having control of only 13 state legislatures.

But now Democrats are seeing their fates flip across the country in a rebuke to Trump. Last month, Democrat Andy Beshear defeated Kentucky Republican Gov. Matt Bevin in a state Trump carried by 30 points. With Beshear's inauguration on Tuesday, Democrats are returning to near-parity with their GOP counterparts when it comes to gubernatorial control — 26 Republicans and 24 Democrats.

It's a similar pattern to what happened during the last administration. At the start of President Barack Obama's term, Democrats held 28 governors' offices and controlled both chambers of 27 state legislatures. By the time Obama left office, Democrats were at a nadir and had full control of just 13 state legislatures. According to Quorum, it was the biggest loss suffered under a president since Dwight Eisenhower.

The first big shift came during the 2010 GOP wave. After that electoral backlash to Obama and the Affordable Care Act, 29 governors were Republicans, compared with just 20 Democrats — a drop of eight governorships from just two years prior.

The advantage Republicans claimed during those midterms resonated throughout the decade.

Historically, incumbent presidents lose congressional seats in their first midterm election. But following the ACA backlash, Obama got "shellacked," as he put it — a loss of 63 House seats that would cement their minority status for eight more years. The state-level losses in 2010 were especially devastating for Democrats because they allowed Republicans to wrest control of redistricting in many states and shore up their wins.

But by 2018, even the aggressive gerrymanders Republicans had drawn after 2010 couldn't completely withstand the electoral shifts happening as a response to Trump and the regular diminishing impact of redistricting because of population shifts over the course of a decade. While GOP gains got more pronounced in rural areas, Democrats were winning not just in urban centers but in suburban areas that were once GOP strongholds.

In 2017, Democrats held just 16 governors' mansions. But after Trump's first midterm, the numbers were more balanced — 23 Democrats to 27 Republicans. With the flip in Kentucky this year and holding on to Louisiana in the off-year gubernatorial elections, Democrats are close to catching back up to Republicans. Even states that were critical to Trump's Electoral College victory have transformed since he took office, with Democrats flipping governors' races in Michigan and Wisconsin in 2018.

Ultimately, the 2019 elections showed that candidates and campaigns still matter. Beshear's victory in Kentucky was largely a referendum on unpopular incumbent Bevin, especially since other GOP statewide candidates won. Still, Trump couldn't transfer his popularity down the ballot to rescue Bevin.

And it didn't work a few weeks later in Louisiana, where conservative Democrat John Bel Edwards was thought to be an "accidental governor" after his upset win in 2015. But he remained popular in the state, and weak Republican nominee Eddie Rispone couldn't be dragged across the finish line by Trump despite holding multiple state rallies to help him. 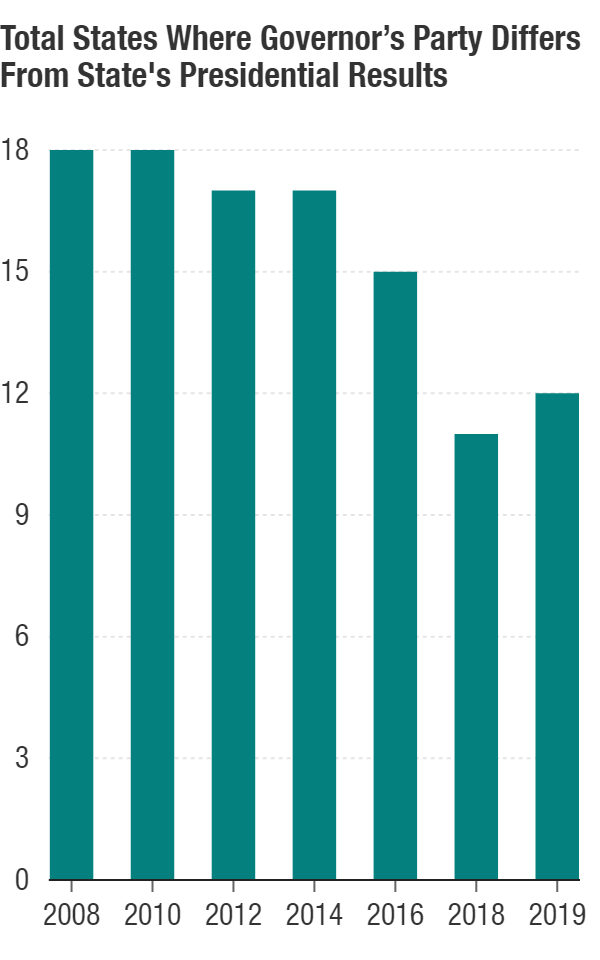 The presidential results refer to the most recent presidential election to that year. Jessica Taylor/NPR hide caption

While states have seen a decrease in split voting between governors and presidents, it's still not unheard of to split on federal versus state elections. In 2008, there were 16 states that voted differently for governor than they did in the 2008 presidential election. In 2010, 18 states elected governors from a different party than how they had voted just two years before.

Now, just 12 states have a chief executive of a different party than how they voted in 2016 for president. And that's true for both Democrats and Republicans. Maryland, Massachusetts and Vermont are reliably Democratic at the federal level, but in 2018 their popular GOP incumbents easily won reelection.

The big question now is whether Democrats can take back a majority among governors again in 2020, along with the White House. It's a critical redistricting year, so having your own party's governors in place, along with control of state legislatures, is paramount.

Among the 11 races for governor next year, Republicans are eyeing a takeover in Montana, where Democrats have held the governorship there for 15 years, and hoping to defeat North Carolina's Democratic Gov. Roy Cooper. Meanwhile, Democrats have their sights set on flipping control in New Hampshire and Vermont, where governors are elected every two years instead of four. But they have had trouble winning those gubernatorial races, despite both states' Democratic tilt.