Accessibility links
House Democrats Unveil 2 Impeachment Articles Against Trump Judiciary Committee Chairman Jerry Nadler, D-N.Y., and his colleagues announced on Tuesday they're charging the president with abuse of power and obstruction of Congress. 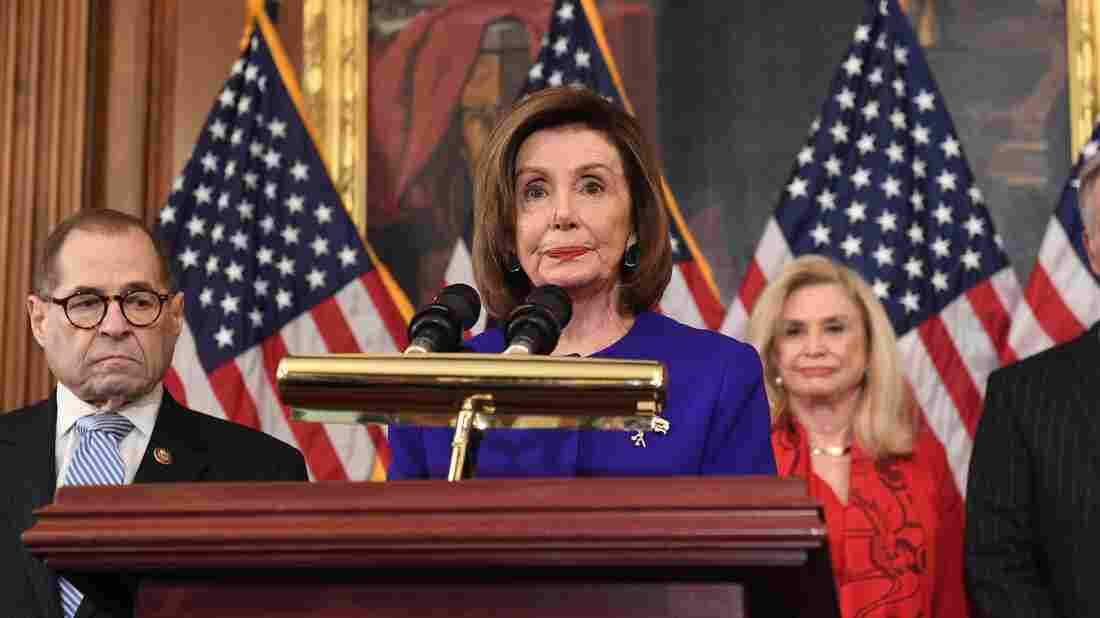 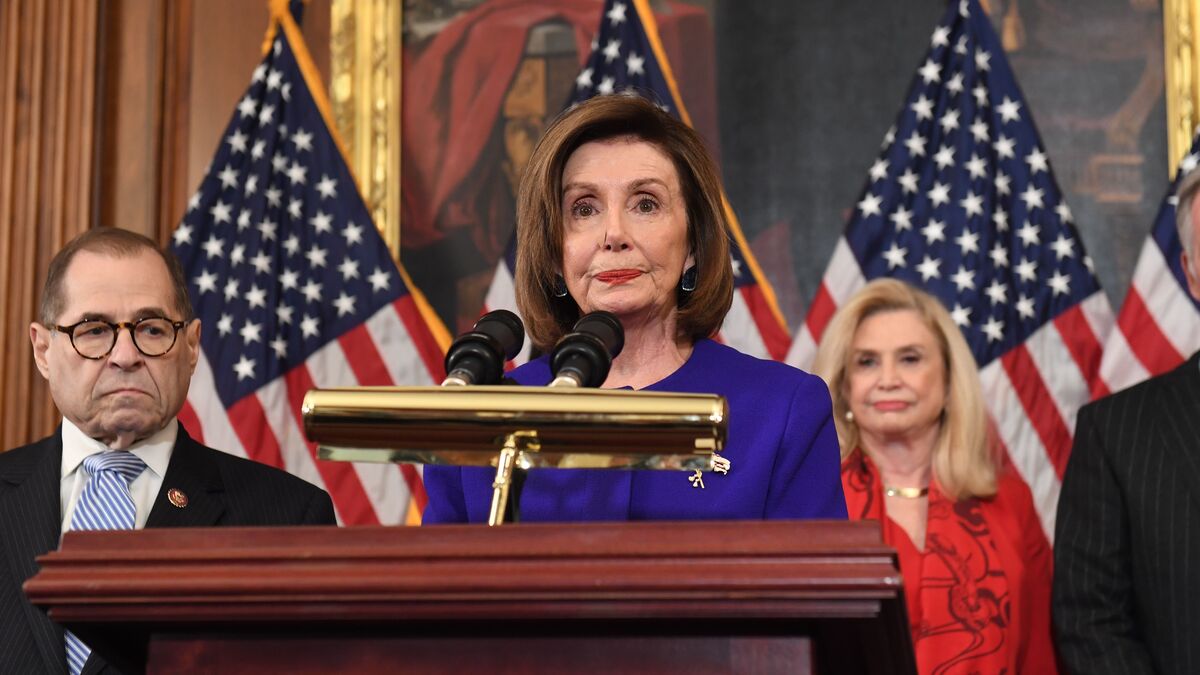 House Speaker Nancy Pelosi and the chairs of investigative committees announce the articles of impeachment against President Trump on Tuesday.

House Democrats unveiled two articles of impeachment against President Trump on Tuesday morning, charging him with abuse of power in the Ukraine affair and obstruction of Congress.

Read the articles of impeachment here.

The text recounts the findings of the House's investigation into Trump's dealings this year with Ukraine and, among other charges, says Trump "has betrayed the nation by abusing his high office to enlist a foreign power in corrupting democratic elections."

Those actions, the document says, "were consistent with President Trump's previous invitations of foreign interference in United States elections" — an allusion to the earlier imbroglio over Russia's attack on the 2016 election.

Democrats evidently decided to reference what they called this pattern of behavior and relevant prior events without making them the focus of the charges.

Instead the impeachment case centers on Trump's desire for concessions by Ukraine and what Democrats call his stonewalling in response to Congress' investigation.

The articles appeared 77 days after the House launched a formal inquiry into Trump's freezing of assistance to Ukraine and request to investigate his political rival. It marked only the fourth time in U.S. history that articles of impeachment have been introduced against a president.

Judiciary Committee Chairman Jerry Nadler, D-N.Y., said Trump "consistently puts himself above the country" and the president's actions in the Ukraine affair left the House with no choice but to resort to the remedy prescribed in the Constitution for the most egregious wrongdoing by a president.

"We must be clear: No one — not even the president — is above the law," he said.

After it completes work on amending the articles, the Judiciary Committee is expected to send them to the full House for a vote on whether to impeach the president. Democrats control the majority.

If the chamber votes to impeach Trump, that would trigger a trial in the Senate — which is controlled by Trump's allies. Republicans in the upper chamber are expected to acquit Trump and permit him to keep his office.

Senate Majority Leader Mitch McConnell, R-Ky., suggested on Tuesday that irrespective of when Democrats complete their impeachment process in the House, a trial for Trump would not get underway until January.

The president wrote on Twitter that he rejected the premise of Democrats' case — he did not "pressure" his Ukrainian counterpart, Trump argued.

Nadler just said that I “pressured Ukraine to interfere in our 2020 Election.” Ridiculous, and he knows that is not true. Both the President & Foreign Minister of Ukraine said, many times, that there “WAS NO PRESSURE.” Nadler and the Dems know this, but refuse to acknowledge!

Trump also spent a large portion of a campaign rally Tuesday night slamming Democrats for what he called their "flimsy, pathetic, ridiculous" articles of impeachment.

"They're impeaching me, and there are no crimes ..." he said. "You know why? Because they want to win an election and that's the only way they can do it."

Trump's campaign said separately on Tuesday that impeachment represented a craven attempt by Democrats to sabotage the election because House Speaker Nancy Pelosi and her members are worried that none of their presidential candidates can defeat Trump in the election next year.

In announcing the articles, House Intelligence Committee Chairman Adam Schiff, D-Calif., said Trump's actions have imperiled the integrity of the 2020 election and Trump's continued tenure in the White House continues to do so.

In view of Congress' need to ensure that the election can run fairly and the legislature's need to preserve its status as a coequal branch of government, the House must impeach Trump, Schiff said.

He rejected the idea that Congress should wait for Election Day to let voters decide whether to reelect or remove Trump.

"'Why don't you let him cheat in one more election?'" Schiff asked rhetorically. "That is what that argument amounts to."

In announcing the articles Tuesday, Democratic leaders emphasized that they were not taking the matter lightly. Pelosi and her lieutenants did not take questions from reporters.

But the speaker and members of Congress did convene an unrelated press conference not long after their announcement to hail what they called the good changes they'd made to the proposed North American free trade agreement they'd received from Trump.

Pelosi, in short, continued the political push-and-pull with the very administration that her members also are trying to end. And Trump, for his part, welcomed the support of the very Democrats who would remove him.

Looking like very good Democrat support for USMCA. That would be great for our Country!

Articles of impeachment were previously introduced against Presidents Andrew Johnson, Richard Nixon and Bill Clinton. Johnson and Clinton were impeached but acquitted by the Senate. Nixon resigned before he was impeached by the House.

The drafting of articles of impeachment followed lengthy testimony before the House Intelligence Committee — first behind closed doors, then in public — from current and former government officials.

In its 300-page report released last week, the committee argued that Trump abused his office and pressured Ukraine to open investigations against former Vice President Joe Biden and his son Hunter for Trump's own political benefit.

In a House Judiciary Committee hearing Monday, lawyers for House Democrats presented evidence they say shows the president has abused his power, obstructed Congress and should be removed from office.

"President Trump's persistent and continuing effort to coerce a foreign country to help him cheat to win an election is a clear and present danger to our free and fair elections and to our national security," committee lawyer Daniel Goldman said.

Meanwhile, House Republicans have dismissed the inquiry as purely partisan and criticized its process.

"At the end of the day, all this is about is a clock and a calendar," said Rep. Doug Collins, the lead Republican on the panel, "and they can't get over the fact that Donald J. Trump is president of the United States, and they don't think they have a candidate who can beat him."

The White House has rejected offers from Democrats to participate in the inquiry, blocked some officials from testifying and refused to turn over documents.

The dispute over testimony from key administration figures — including Vice President Mike Pence and Secretary of State Mike Pompeo — is the basis for Democrats' allegation that Trump has obstructed Congress and violated the Constitution's requirement that the legislature provide a check and balance on the executive.

But White House lawyer Pat Cipollone has called the inquiry "completely baseless" and unfair and not a process the administration is bound to respect.