Accessibility links
Now Playing: The Investigation Into The Russia Investigation A watchdog report has reinvigorated the debate over the 2016 Trump campaign and its links to Russia. Another report is in the works and looks likely to reach different conclusions. 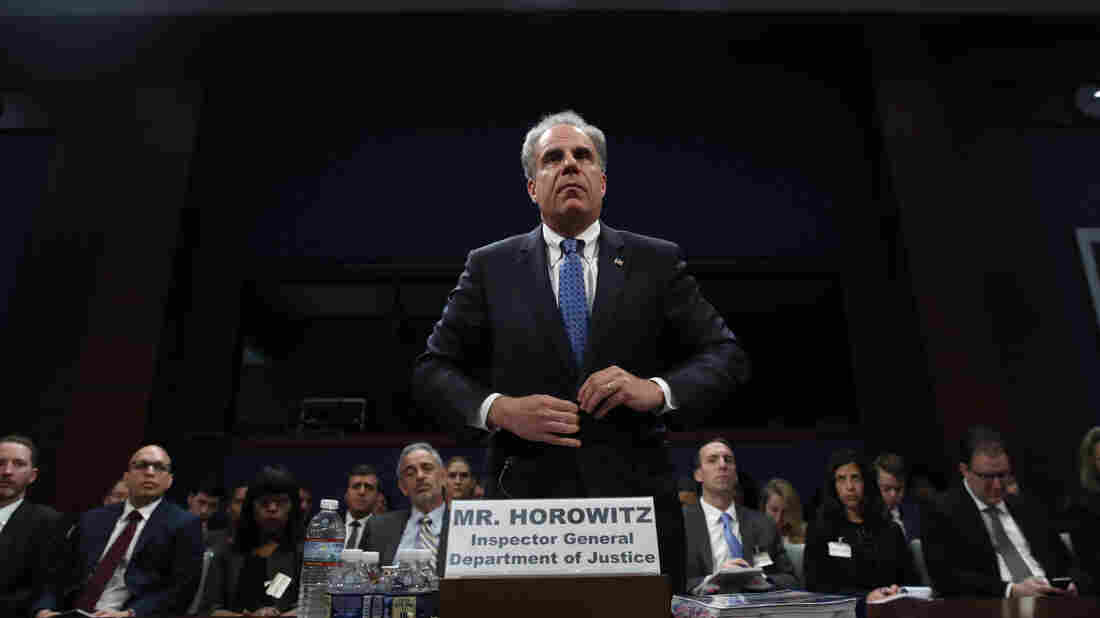 Justice Department Inspector General Michael Horowitz, shown here in 2018, released a report Monday on the 2016 Trump campaign and its links to Russia. He found the FBI was justified in opening the investigation but sharply criticized the way the bureau pursued surveillance warrants against Trump campaign adviser Carter Page. Jacquelyn Martin/AP hide caption 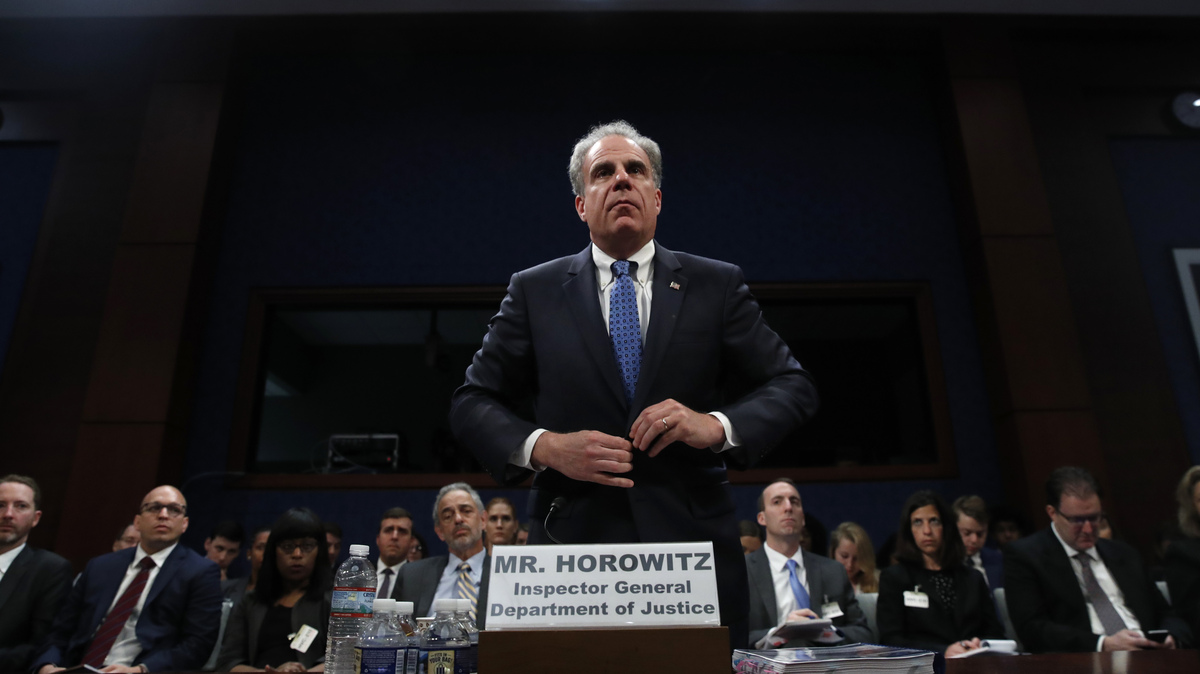 Justice Department Inspector General Michael Horowitz, shown here in 2018, released a report Monday on the 2016 Trump campaign and its links to Russia. He found the FBI was justified in opening the investigation but sharply criticized the way the bureau pursued surveillance warrants against Trump campaign adviser Carter Page.

A newly released watchdog report on how the FBI carried out the Russia investigation offers something for everyone.

The report, the work of Justice Department Inspector General Michael Horowitz, found that the FBI had ample evidence to open the investigation into the 2016 Trump campaign and its links to Russia. For Democrats, that was long-awaited vindication.

Republicans seized on the report's sharp criticism of the FBI, which suffered from "serious performance failures" as it pursued surveillance warrants against one of Trump's campaign advisers, Carter Page.

In addition, FBI directors, past and present, accepted the findings released Monday and said the bureau needed to learn from the multiple mistakes spelled out by Horowitz in a report that runs more than 400 pages.

But there's one thing this report was not: the final word on the Russia investigation.

Shortly after the release of the Horowitz report Monday, Attorney General William Barr lambasted the FBI, saying it conducted "an intrusive investigation of a U.S. presidential campaign on the thinnest of suspicions."

The Horowitz report actually says that the bar for opening such an investigation is relatively low and concludes that the initial information "was sufficient to satisfy the low threshold established by the [Justice] Department and the FBI."

Barr kept up his criticism Tuesday, telling NBC News that he did not believe there were sufficient grounds "to open a full-blown counterintelligence investigation, specifically using the techniques that they did to collect intelligence about the Trump campaign."

"I think our nation was turned on its head for three years based on a completely bogus narrative that was largely fanned and hyped by a completely irresponsible press," Barr added.

This one is being carried out by the U.S. attorney for Connecticut, John Durham, and has a broader scope that will also examine the CIA's role.

While Durham's investigation is still underway, he took the unusual step of commenting publicly and suggesting he was heading toward different conclusions from Horowitz's.

"Based on the evidence collected to date, and while our investigation is ongoing, last month we advised the inspector general that we do not agree with some of the report's conclusions as to predication and how the FBI case was opened," Durham said.

There's no word on when Durham's report will be completed.

As Democrats formally call for President Trump's removal from office over his "corruptly soliciting" help from Ukraine in an attempt to smear Democratic rivals, the president and Republicans are pushing a counternarrative that focuses on the way the Russia investigation was carried out.

"It's a disgrace what's happened with the things that were done to our country," Trump said in response to the Horowitz findings. "It's incredible, far worse than what I ever thought possible."

Horowitz is scheduled to testify about his report before the Senate Judiciary Committee on Wednesday.

Meanwhile, Democrats stressed that the report validated many of their arguments about the Russia investigation.

"This report conclusively debunks the baseless conspiracy that the investigation into Mr. Trump's campaign and its ties to Russia originated with political bias," said Sen. Chuck Schumer, a Democrat from New York.

Horowitz began working on the report in March 2018 following requests from the Justice Department and lawmakers. He focused on the FBI's warrant, obtained from the Foreign Intelligence Surveillance Court, that looked into Carter Page, who played a minor role as a foreign policy adviser in the Trump campaign from March to September in 2016.

Investigators found 17 significant errors and omissions in the initial application and the three renewals to surveil Page from October 2016 until September 2017.

Page has a long history of working in and traveling to Russia and met with at least one senior Russian government official during a July 2016 trip. He has not been charged with any crime and has always insisted he did nothing wrong.

The Horowitz report found, among other shortcomings, that the FBI relied on uncorroborated information provided by British ex-intelligence officer Christopher Steele. The report said the bureau also failed to pass on information that could have weakened its case as it sought to renew the surveillance warrants for Page.

Former FBI Director James Comey, who was in charge of the bureau when the Russia investigation began in July 2016, told NPR on Monday that he accepted responsibility for the findings.

"As the leader, you have to take responsibility when there are mistakes in your organization, no matter how far down they are. It's your responsibility. And if I were still director, I'd be doing what Chris Wray is doing, which is figuring out how we make sure they don't happen again," he said.