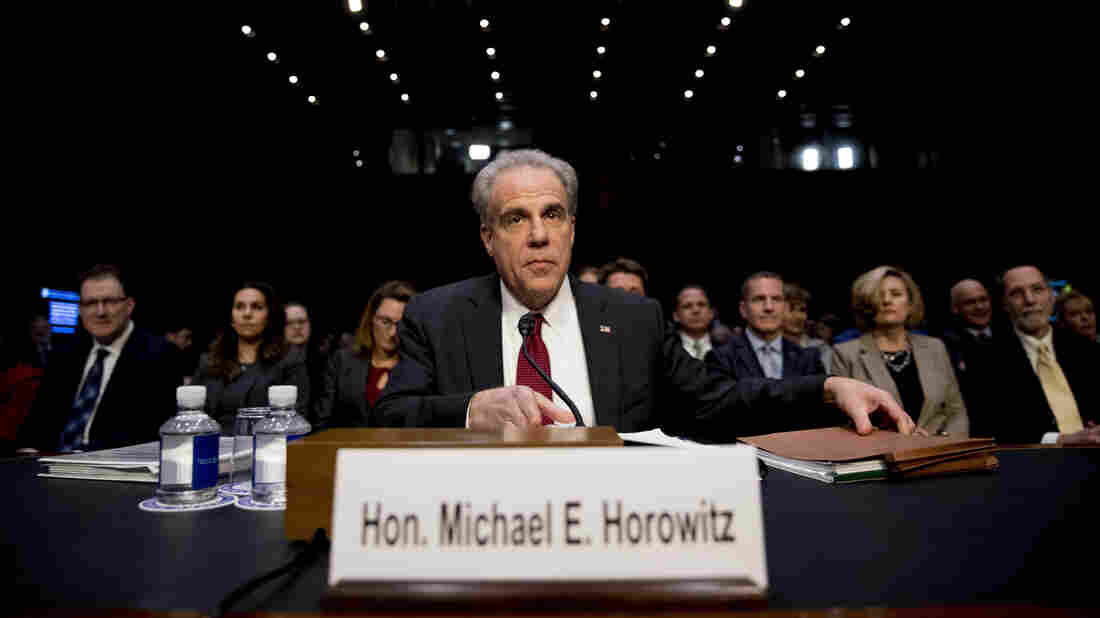 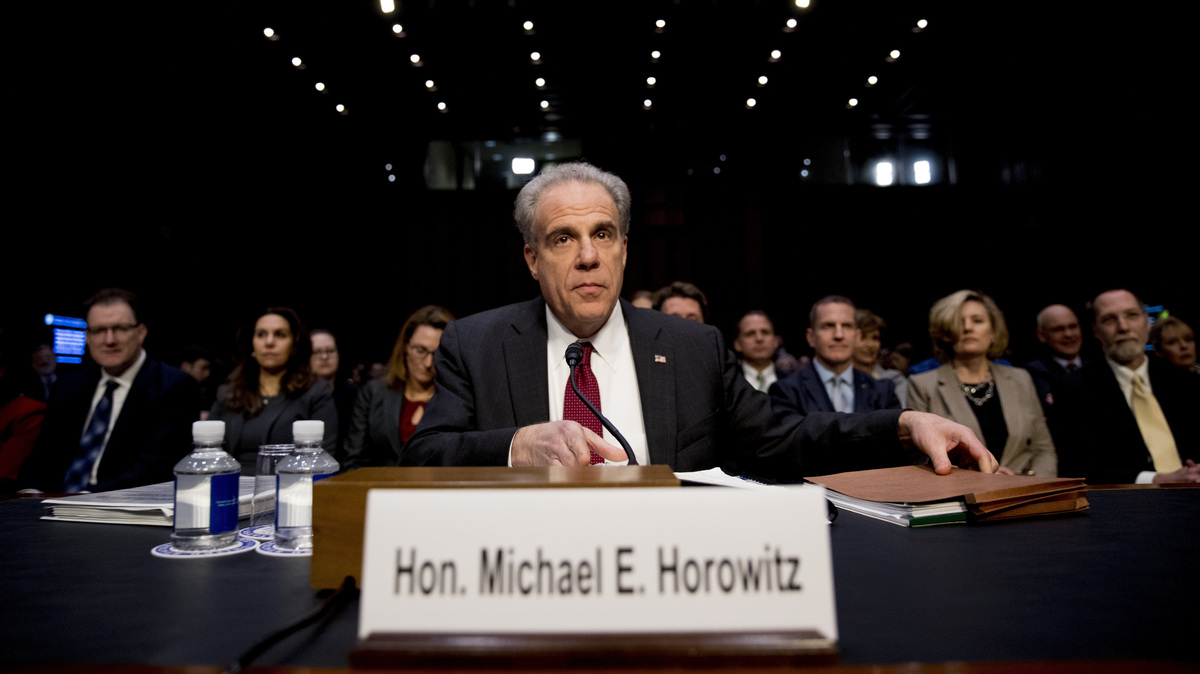 The Justice Department's inspector general, Michael Horowitz, testified before the Senate Judiciary Committee on Wednesday about his report on the origins of the FBI's probe into the 2016 Trump campaign's possible ties with Russia.

The 400-plus page report, released Monday, found that the FBI had ample evidence to open its investigation — despite allegations of political bias.

But, Horowitz told the panel, "Our review identified significant concerns with how certain aspects of the investigation were conducted and supervised."

He said the FBI failed to adhere "to its own standards of accuracy and completeness" when it filed applications under the Foreign Intelligence Surveillance Act regarding former Trump campaign aide Carter Page.

"The activities we found here don't vindicate anybody," he said in response to a question about whether former FBI Director James Comey should feel vindicated about how the bureau handled the investigation, dubbed "Crossfire Hurricane."

The report found that the bureau's decision to open an investigation "was in compliance with Department and FBI policies, and we did not find documentary or testimonial evidence that political bias or improper motivation influenced" the decision.

Counterclaims about the findings

In lengthy opening remarks at the hearing, Judiciary Committee Chairman Lindsey Graham, R-S.C., blasted the FBI's conduct in its handling of the Russia investigation. "What happened here is not a few irregularities," he said. "What happened here is the system failed. People at the highest level of our government took the law in their own hands."

"It's as if [former FBI Director] J. Edgar Hoover came back to life," Graham said, alluding to "the old FBI ... that had a chip on its shoulder and wanted to intimidate people."

Graham also asserted, counter to claims by the president and other Republicans, that Russia — not Ukraine — was responsible for meddling in the 2016 election. "We know the Russians are messing in our elections. It was the Russians, ladies and gentlemen, who stole the Democratic National Committee emails, [former Clinton campaign chairman John] Podesta's emails and screwed around with Hillary Clinton. It wasn't the Ukrainians," Graham said. "It was the Russians, and they're coming after us again."

The top Democrat on the panel, Sen. Dianne Feinstein D-Calif., said in her opening statement that the IG's report rebutted President Trump's claims that the investigation into his campaign was politically motivated.

"There is no deep state," she said. "Simply put, the FBI investigation was motivated by fact, not bias."

In response to Democrats on the panel, Horowitz said his office "certainly didn't see any evidence" in FBI or Justice Department files that former President Barack Obama asked the U.S. government to investigate Donald Trump's campaign, as Trump has charged.

Nor, Horowitz said, was there any evidence that the Obama administration tapped Trump's phones at Trump Tower.

Horowitz also reaffirmed that the so-called Steele dossier, a collection of partly unverified reports about then-candidate Trump, "had no impact" on the bureau's decision to open the investigation.

A British former intelligence officer, Christopher Steele, was paid for his research by Democrats. Trump and Republicans have slammed the material as outrageous and say it's further egregious that it was used to justify surveillance on Page.

Referring to the Page surveillance application, Horowitz stated Wednesday, "We are deeply concerned that so many basic and fundamental errors were made by three separate, hand-picked investigative teams, on one of the most sensitive FBI investigations, after the matter had been briefed to the highest levels within the FBI."

Page was not charged with a crime.

In addition to talking about Monday's report, Horowitz took questions from lawmakers about FBI conduct beyond the Trump campaign investigation, including how agents allegedly leaked details of the Clinton email probe.

The IG, in a previous report on the FBI's investigation into Clinton's use of a private email server, found that leaks from FBI agents to journalists and others were pervasive.

Horowitz said Wednesday that "we are looking at, still," the issue of leaks from the FBI's New York field office. But he said that the challenge "is proving who spoke to whom and when, based on records of the FBI."

Democrats believe agents in New York leaked details of the investigation to Trump surrogate Rudy Giuliani, who said in October 2016 that "big surprises" were coming, shortly before then-FBI Director James Comey announced that new emails had been discovered relating to Clinton.

Reaction to the IG report

Horowitz announced his investigation into the FBI's investigation of the Trump campaign in March 2018 after requests from the attorney general and lawmakers.

Trump and allied Republicans have long argued that the Russia probe was a political "witch hunt" without legal merit. For Democrats, the findings of the Russia inquiry have helped fuel the move toward impeachment.

The release of the inspector general's report only hardened that divide, as further demonstrated in Wednesday's hearing.

In an interview Tuesday, Attorney General William Barr blasted Horowitz's report, telling NBC News that "I think our nation was turned on its head for three years based on a completely bogus narrative that was largely fanned and hyped by a completely irresponsible press."

Barr has commissioned a separate report on the origins of the Russia investigation, led by veteran prosecutor John Durham. Durham said Monday that his findings, while still in progress, differ from the inspector general's.

FBI Director Christopher Wray, meanwhile, promised to make reforms in light of the report. But Trump cast doubt on Wray's ability to "fix" the FBI, which Trump contended in a tweet Tuesday "is badly broken."