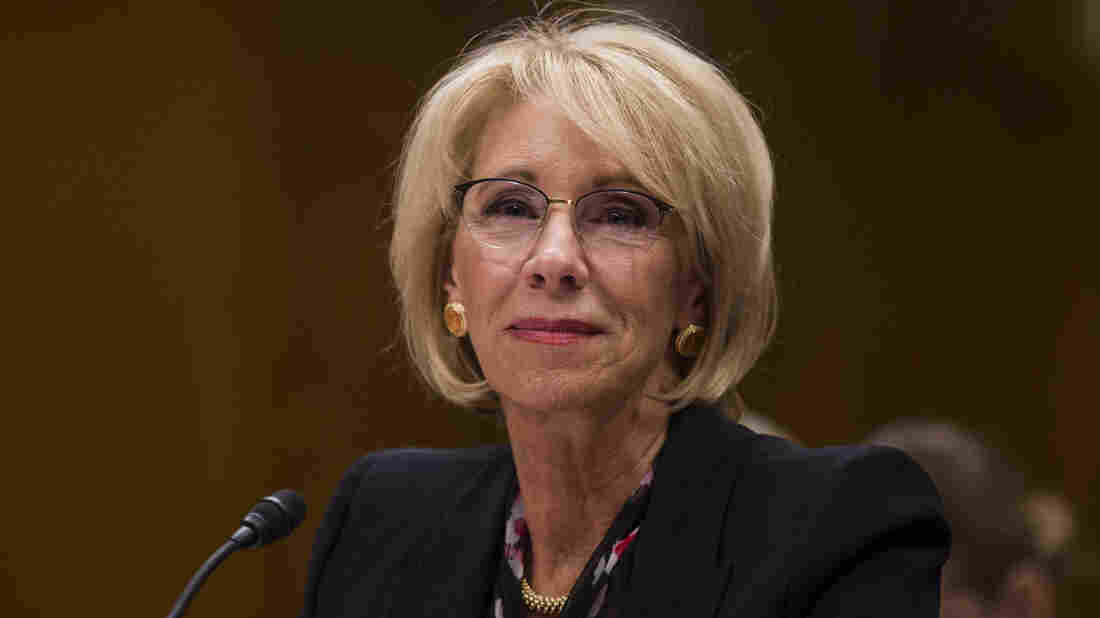 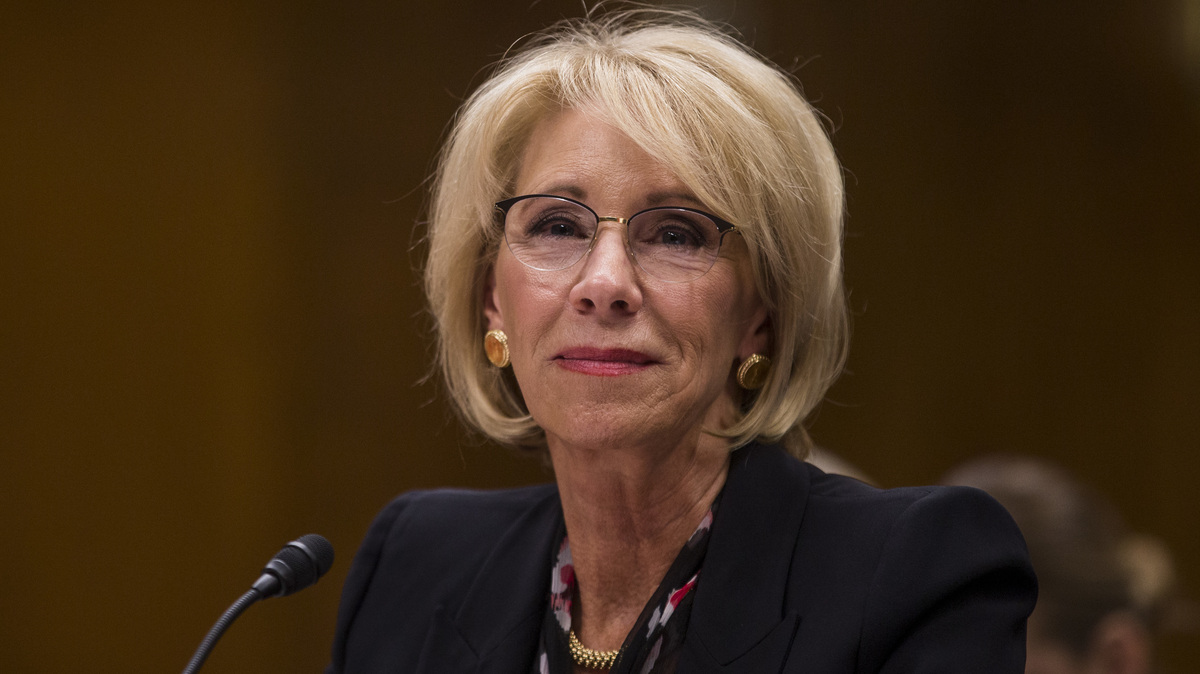 These borrowers — more than 200,000 of them — say some for-profit colleges lied to them about their job prospects and the transferability of credits. They argue they were defrauded and that the Education Department should erase their federal student loan debt under a rule called "borrower defense."

DeVos disagrees: She says most student borrowers still got value from these schools and deserve only partial relief from their federal loans.

Now, internal Education Department memos obtained by NPR show that career staff in the department's Borrower Defense Unit came down firmly on the side of defrauded borrowers.

The memos show this unit reviewed thousands of borrower complaints against now-defunct, for-profit colleges, including Corinthian Colleges and ITT Technical Institute. Just weeks before DeVos was sworn in as secretary, the unit recommended to the department's political leadership that these borrowers deserve no less than full relief from their student debts.

Another memo, dated the next day — Jan. 10, 2017 — arrived at the same conclusion for California-based students who allege they were lied to by ITT Technical Institute, and likewise recommended full relief.

A counternarrative to DeVos' position

Until now, these internal department memos have been hidden from public view. Lawmakers had previously requested access to them, but DeVos and her department refused to hand them over. Instead, DeVos has criticized the Obama administration for lack of due diligence in processing borrower defense claims. In a Nov. 7 letter to Rep. Bobby Scott, D-Va., the chairman of the House education committee, DeVos wrote, "the clear intent of the prior Administration was to eventually provide blanket relief without review of the facts and evidence."

In fact, the memos provide a robust review of the evidence, as well as a thoroughly researched counternarrative to DeVos' position. Instead of limiting students' debt relief by arguing, as DeVos does, that defrauded borrowers still got some value from their educations, these memos arrive at a different conclusion: that credits earned from Corinthian and ITT schools are essentially worthless.

"Hundreds of unprompted student statements confirm that lack of value of an ITT education, as ITT students time and again report that their education was sub-standard and that their degree or affiliation with the school was an impediment rather than an asset as they sought employment," reads the Jan. 10, 2017, memo. It concludes: "Given this extensively well-documented, pervasive, and highly publicized misconduct, the Department has determined that the value of an ITT education — like Corinthian — is likely either negligible or non-existent. ... Accordingly, it is appropriate for the Department to award eligible borrowers full relief."

The memos also include quotes from individual borrowers. In the Jan, 9, 2017, memo, a Corinthian graduate complains, "I was told I would find a job in my field. ... I 'graduated' and still can't find a job that will honor my degree."

"Employers will not touch me," says a borrower quoted in a memo dated Oct. 24, 2016. "After graduating I posted a resume online. I did not receive any responses until I removed [the school's name] from my resume."

Another borrower says, "People just laugh in my face."

The education secretary has the authority to override the recommendations of department staff, and DeVos has done just that. On Tuesday, the department unveiled a new plan to calculate how much defrauded students benefited from their educations and thus how much, if any, debt relief they deserve. Under this new model, most borrowers are unlikely to qualify for full relief.

According to the release, the department's new plan will compare the median earnings of defrauded borrowers to the earnings of students who attended similar programs at other schools. "If the earnings from the school in question under the [borrower defense] application are lower than the median for that program at all comparable schools, then they will be determined to have suffered harm and will receive student loan relief."

This new plan, DeVos said Tuesday, "treats students fairly and ensures that taxpayers who did not go to college or who faithfully paid off their student loans do not shoulder student loan costs for those who didn't suffer harm."

DeVos has argued for years that the Obama administration's full-relief interpretation of the borrower defense rule was too lenient. In a 2017 speech, she said, "While students should have protections from predatory practices, schools and taxpayers should also be treated fairly as well. Under the previous rules, all one had to do was raise his or her hands to be entitled to so-called free money."

When DeVos had to sign off on thousands of borrower defense claims that had already been approved by the previous administration, she added three words below her signature: "with extreme displeasure."

In a statement, Education Department press secretary Angela Morabito tells NPR: " 'Full relief' sounds nice, but it really means 'full liability' for taxpayers – and that's not fair in cases where a borrower is not entitled to it. That's why it's imperative that we consider each Borrower Defense claim individually. To force taxpayers to provide blanket forgiveness would be abandoning our duty to be good stewards of tax dollars. The Department will provide student loan relief to those who qualify for it."

DeVos' new plan is the department's second attempt at resolving the more than 200,000 outstanding borrower defense claims. The first attempt was blocked in May 2018 by Magistrate Judge Sallie Kim of the U.S. District Court in San Francisco. Kim said the department's use of income data violated students' privacy, and she ordered DeVos to stop collecting on the debts of certain Corinthian students. In October, Kim fined DeVos $100,000 for contempt of court after it was revealed the department had not stopped collections. The department apologized, calling the collections a mistake, and said it was quickly moving to issue refunds.

It is unclear whether DeVos' new use of earnings data will also run afoul of the law. News of the revised plan comes ahead of a much anticipated hearing scheduled for Thursday, when DeVos will testify before the U.S. House's education committee about her handling of borrower defense complaints.